In The Back Alley Of Modernity And Gentrification

When the night falls, a corner of the pitch-black alley is illuminated by four orange lanterns. The soft light comes from Xinqiding (心起町), a new coffee shop and creative space on this quiet backstreet. Jia-wei Lee, the owner, often spends the day here with his only staff, Teddy, a black and white bull terrier. Teddy usually curls up for a nap in his peaceful corner by the staircase. But if an occasional guest walks in, he makes sure to give his warm welcome by barking and tackling for a hug. 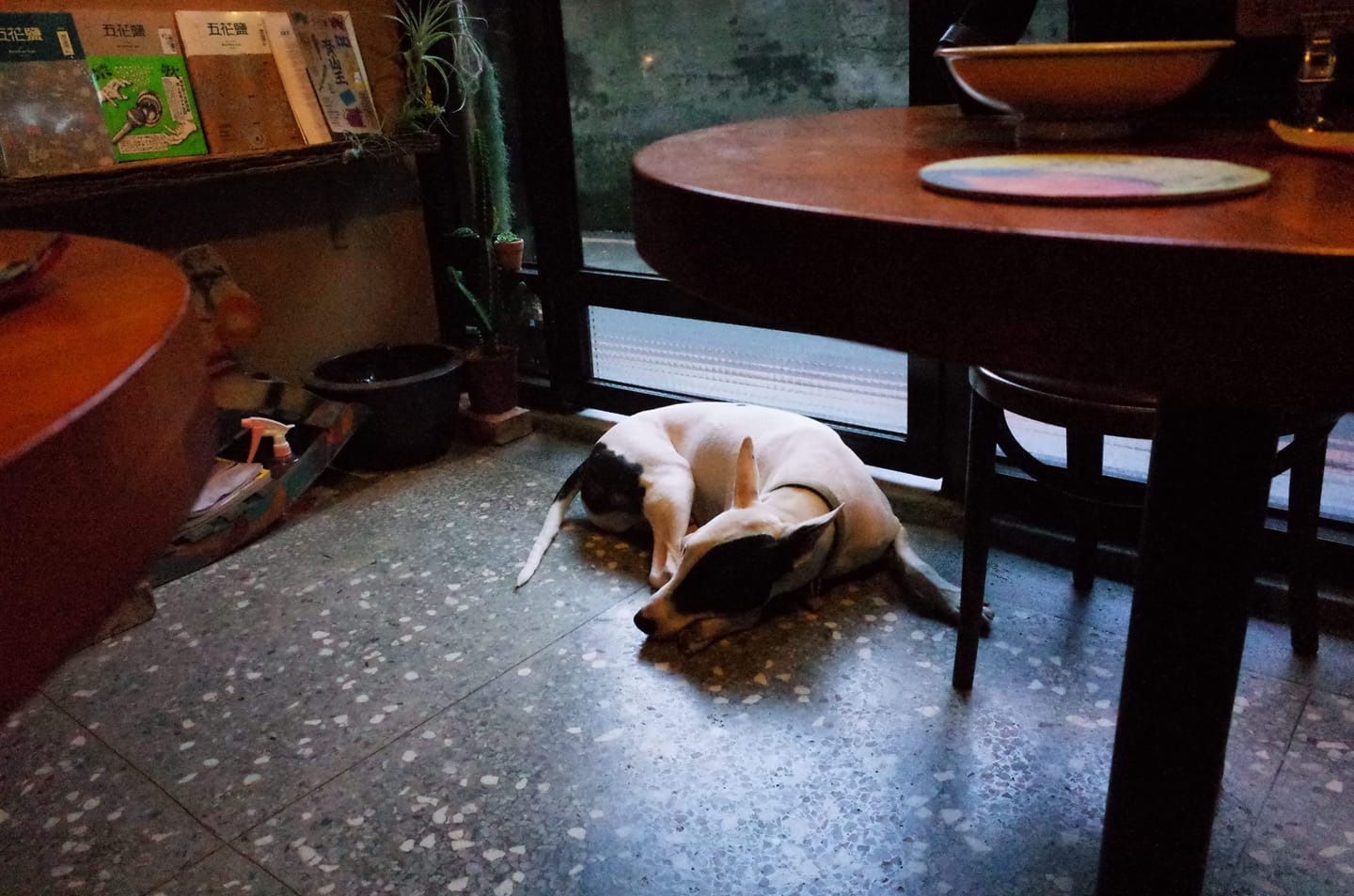 Jia-wei mostly stays behind the miniature coffee bar browsing on his laptop. He would ponder about the next community event, the next exhibition in his small basement gallery. He’s not inviting business. He’s simply waiting for a good conversation with the right person, or the wrong person.

In the face of Taipei’s gentrification, Jia-wei wants to preserve his community’s collective memory and history by creating a communal space in an otherwise lifeless alley. He is, however, struggling with the rapid socioeconomic development in the neighborhood, Ximending.

Opened in 2018, Xinqiding is a quiet coffee shop tucked minutes away from the bustling traffic of Ximending. It’s a compact neighborhood where thousands of tourists pour through daily for shopping and entertainment. While Taiwan has seen a general decline in its tourism industry, Ximending’s visitor growth continues to break the government’s record. The train station in Ximending recorded three million visitors last year, of which 70% were tourists.

Commercial billboards and bright neon signs tower over the center of Ximending. Visitors can find cosmetics stores, international fashion brands, and bubble tea shops in the crowded pedestrian zone. Vehicles are banned from the shopping area to boost foot traffic. Ximending’s vibrancy and liveliness encourage people to shop and wander tirelessly. If they do need a break, there’s always a movie theater or a popular food chain nearby.

Near the pedestrian zone stands a major historic landmark, the Red House Theater. The government recently completed the renovation of the building’s façade and converted the interior into a hipster market with contemporary designer shops. History is, after all, a profitable commodity in the tourism sector.

Twenty years ago, Xinqiding’s previous occupant was a toy store selling handcrafted wooden toys and candies. Before children had access to easy entertainment through iPads, they spent much more time outdoors. Simple handmade toys like bamboo dragonfly and yo-yo were popular items among kids. Sadly, this type of traditional toy store has vanished in Taiwan. 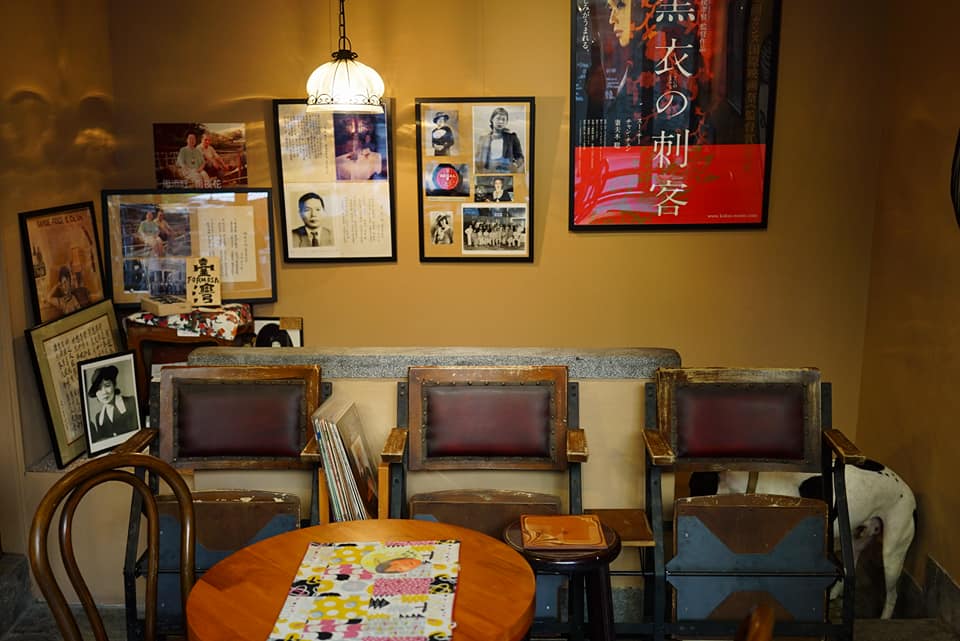 Jia-wei used to walk by the shop every day. The location had been vacant for two decades since the previous owner retired and passed away. The adjacent units, too, have been abandoned and filled with scrap wood and old furniture. Last year, Jia-wei stumbled upon the listing when he decided to create a community space. The family of the previous owner had finally wanted to make use of the abandoned space again.

Jia-wei named Xinqiding after the village that was established during the Japanese occupation of Taiwan in the early 20th century. The written character “Xin (新)” translated into “new,” implying a sense of renewal and reform. With a different vision in mind, Jia-wei changed the word to have the same pronunciation but a different meaning – “soul (心)”.

He envisioned Xinqiding to be a place where people could interact and exchange their thoughts and cultural perspectives.

The interior design of Xinqiding shies away from the modern minimalist design. Vintage movie posters against the rustic yellow walls intend to transform the space into a time-travel experience for visitors. The tiny space is barely enough to fit two small tables, a cluster of local artisan handicraft, and a postcard stand featuring a Taiwanese artist’s retro designs.

Xinqiding is a curated space first, a coffee shop second. Jia-wei has decorated the space with his precious collection of personal items, like his black and white photographs, vintage radio, and yellowing poetry books. The espresso machine behind the coffee bar was, ironically, the last purchase for the space.

“We wanted to recreate the atmosphere from Ming-liang Tsai’s movies, which were mostly filmed in Ximending in the 1990s,” Jia-wei explains. “The movie scenes included our memory for the public space, not just for the pleasure of viewing, but for our own feelings derived from our childhood years of wandering on those streets.”

Ming-liang Tsai’s debut film, Rebels of the Neon God (1992), echoed with Jia-wei’s nostalgia for his rebellious teenage years. The movie followed a few troubled teens and portrayed a “sinister feeling” that reminded Jia-wei of his growing up in Ximending. 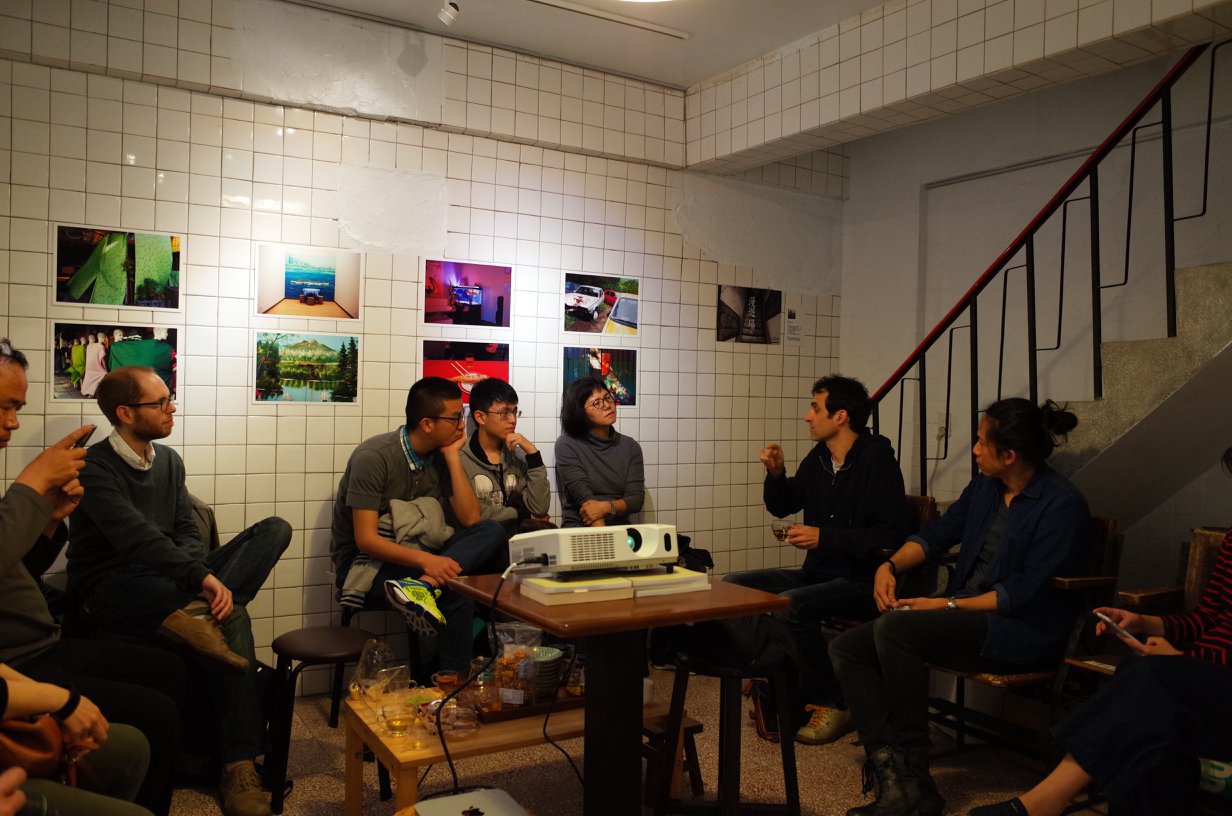 The now trendy district was a place of darkness then. At night, teenagers wandered on the streets, smoking, gambling, and seeking for trouble with the triad gangs. Street fights, drugs, and petty theft were common sights.

“The film captured young people’s feelings of isolation, a sense of helplessness, like there’s no exit for them at the time,” Jia-wei says.

Rebels felt like a mirror to Jia-wei’s life growing up in the 1990s in a conservative Taiwanese society. Teenagers were expected to have a university education. Those who failed the admissions became the outcasts – the ones who lingered on the streets of Ximending. The ominous environment Rebels had captured in its time, however, exists only in memories and screens now. Over the years of neighborhood restructuring, the government has greatly reduced crime rate and increased mainstream retail activities in Ximending.

Today, Ximending is still a thriving hub among teenagers, but the environment has changed. Smoking is largely prohibited. The video game arcades where people used to gamble illegally have closed. Some welcome the pleasant changes, others find the new façade of Ximending destroying diversity and traditional culture.

Jean-Robert Thomann, 46, is a French filmmaker residing near Ximending. He discovered Xinqiding by chance and became friends with Jia-wei after a long chat over coffee. He was later invited to show his experimental film, My Short Story at the West Gate (2016), at Xinqiding and share his commentary with the viewers. The film’s main character was forced to wander around Ximending after hours.

“After midnight, Ximending has a completely different atmosphere. It quiets down, and you’ll suddenly see lots of homeless people sleeping on the streets,” Jean says. 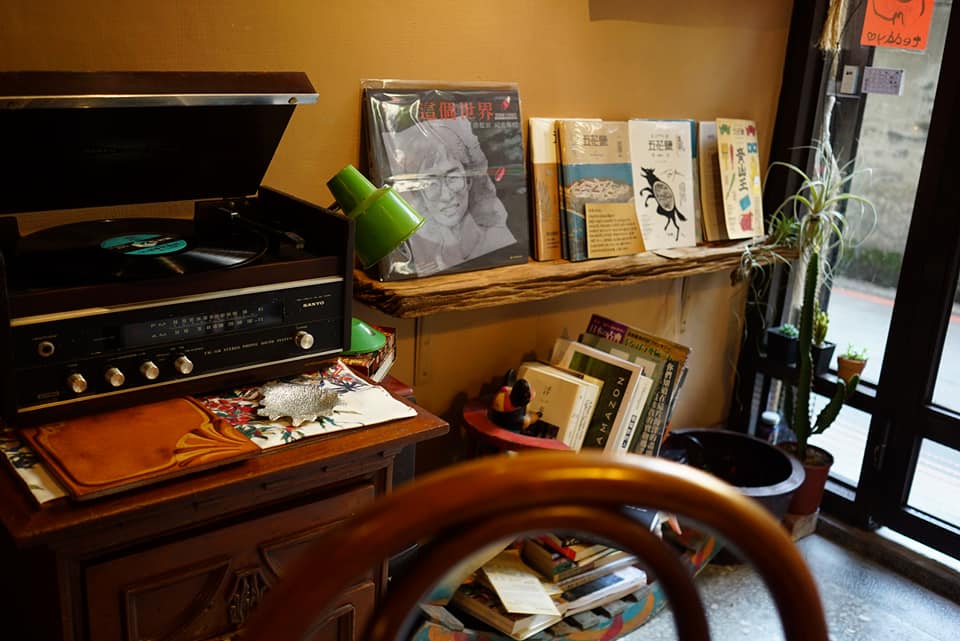 As a witness of the neighborhood’s changes the years, Jean worries about the cultural decline in Ximending’s vicinity. He adores the old houses built outside of the shopping district, the cheap and delicious street food, and the older folk who stroll around leisurely. But those scenes are slowly replaced by luxury homes and commercial development.

“The new buildings are so expensive that only 7/11 and high-end restaurants can afford to rent them,” Jean complains. “And the new buildings all look the same without a trace of the traditional Taiwanese features.”

Almost every tour guide book on Taipei recommends Ximending as a must-see destination. Many tourists praise the neighborhood as a shopping paradise with an abundance of clothing retailers and designer shops. Movie premieres and mini concerts happen frequently, attracting tourists and locals alike. Today’s Ximending is a place of diverse entertainment.

“I don’t think Ximending has a diverse culture. It’s a singular kind of diversity. You can only find the same types of stores, like those popular crane claw machines, but not much genuine creativity,” Jia-wei says.

Thanks to the surprisingly affordable rent in Xinqiding, Jia-wei is able to keep up with the business. However, his lack of entrepreneurial skill barely helps to generate sustainable income for the business. His postcard sales amount to zero profit and his coffee menu is underpriced. On a good day, rarely, he earns around NT$ 1,000 by serving 10 cups of coffee.

“We can’t increase the price on the menu now, otherwise the neighbors would stop coming in,” Jia-wei says. We – Jia-wei often uses the pronoun “we”, as if he’s speaking on behalf of the community. The neighbors he’s referring to are the elderly residents who walk by the coffee shop daily. 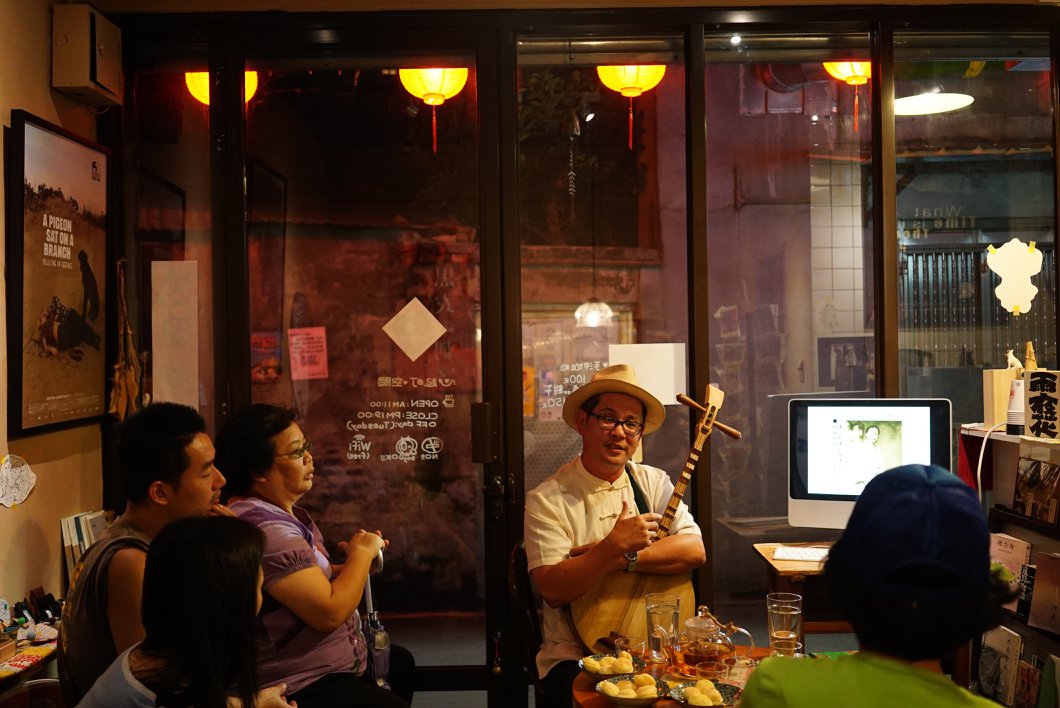 Jia-wei continues, “I can handle the business for now because of the low rent. But if the rent increases, I might have to move or look into applying for a non-profit permit.”

Yayoi Chang, a museum coordinator, frequents Xinqiding on her days off. Yayoi loves observing Teddy by the staircase when she chats with Jia-wei casually. Their conversations often last longer than a cup of black coffee. Other customers sometimes bring their own pieces of artwork or antiques to spend an afternoon sharing anecdotes with Jia-wei; perhaps they find refuge in a small oasis hidden away from the ever-changing city.

“I don’t think Jia-wei is trying to fight against changes. He just wants to bring life back to a decaying place and revive its energy again,” Yayoi says. “But he has no idea how the future will pan out. Isn’t this like Taiwan itself? Our collective helplessness.”