PRIDE WAS commemorated in Taipei this afternoon, with a small parade at Liberty Plaza titled “Taiwan Pride Parade for the World”. Around 1,000 were in attendance, despite showers through the afternoon.

The event was touted as an opportunity to celebrate Pride Month at a time in which most places in the world are unable to. The COVID-19 situation is under control in Taiwan, while much of the world is still under lockdown. As such, the event is sometimes touted to be the only public pride parade in the world currently, though other events also take place elsewhere. 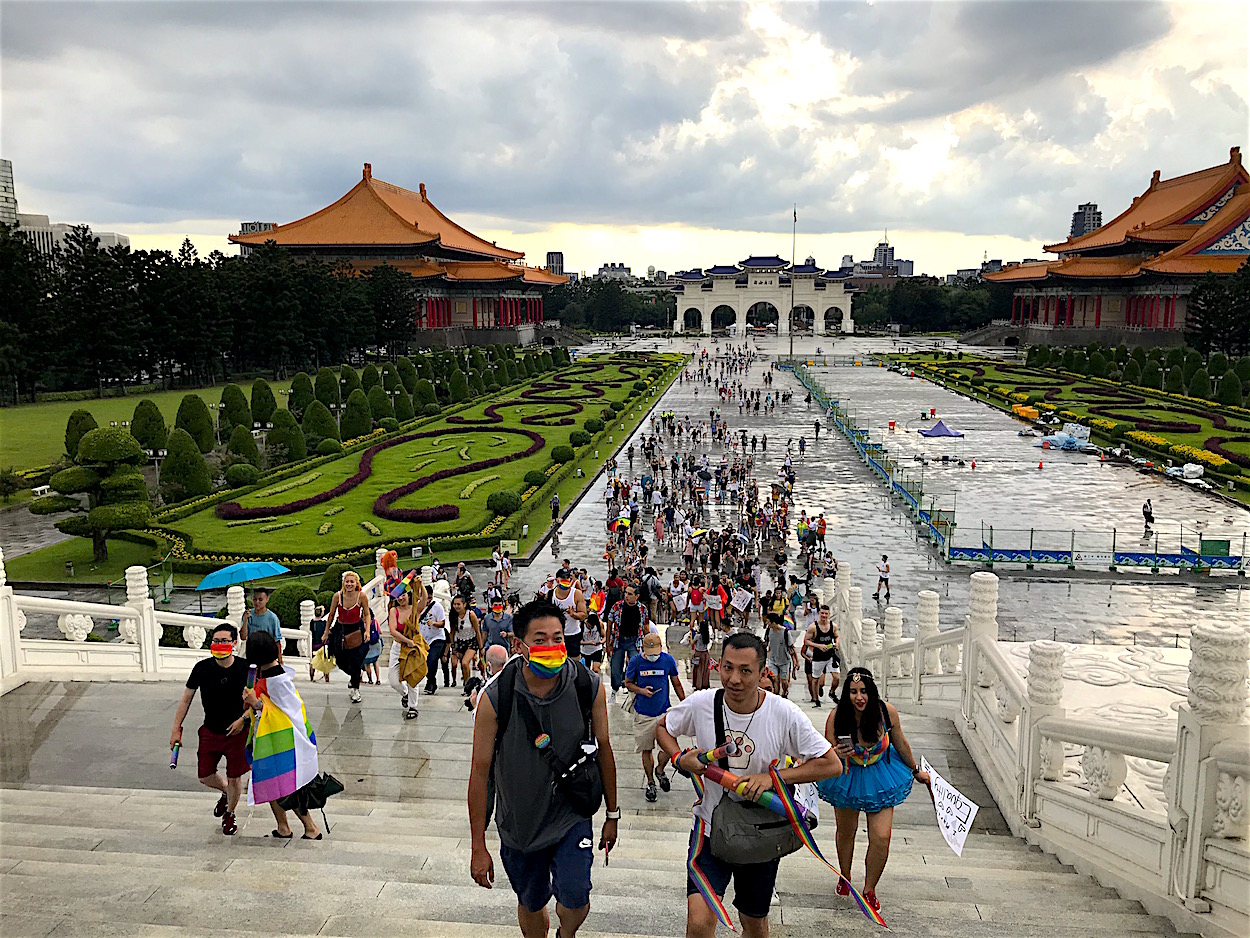 Pride is commemorated annually in Taipei in October, in order to avoid the heat and the daily rainstorms that take place during the summer in Taiwan. However, the organizers for today’s pride parade were different from the organizers of the October pride parade, with planning for the event having begun only several weeks prior, as a way to commemorate pride in light of the inability of much of the world to do so at present.

Participants today gathered at the Liberty Plaza archway at 3 PM to make signs. Rainbow face masks were distributed among attendees, as were signs that read “I March For”, with attendees encouraged to write what they marched for on the sign. Two tents were set up to distribute facemasks and signs. A downpour began at 3:45 PM, leading to some delays for the scheduled march at 4 PM while some members of Taipei’s drag queen community performed in the rain. 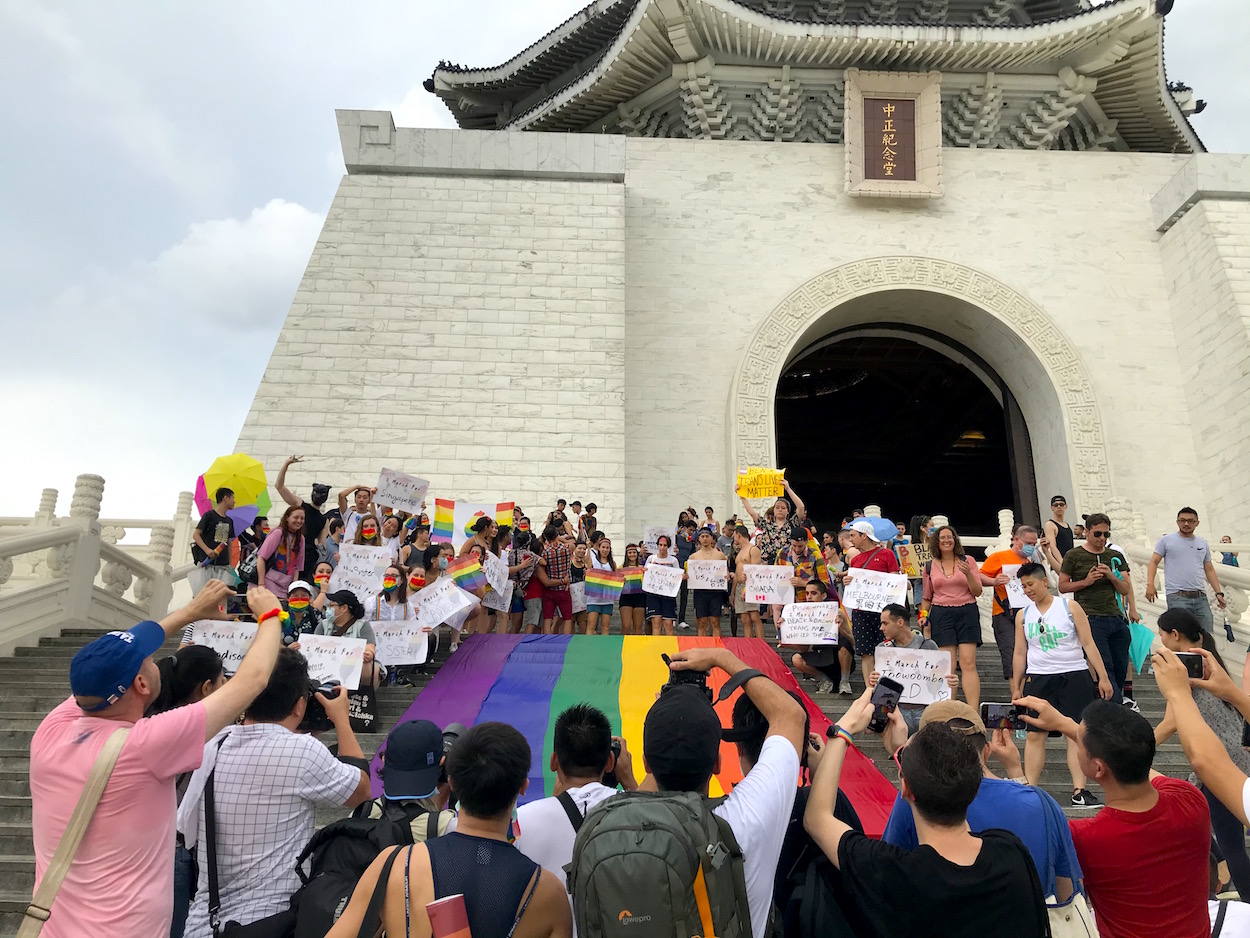 Participants then marched toward the Chiang Kai-shek Memorial Hall at around 4:15 PM, carrying a large rainbow banner and their signs, marching up the stairs and past the statue of Chiang Kai-shek, stopping to pose for photos on the staircase while descending, before returning to the Liberty Plaza archway. One person shouted, “Fuck Chiang Kai-shek! You don’t deserve us!” in English while the crowd passed by the statue of Chiang Kai-shek, to laughter. Afterward, participants returned to the Liberty Plaza archway, with many taking the time to pose in front of the rainbow banner and hold up the signs they had made, before gradually dispersing after 5 PM.

The event was independently organized and was relatively modest in scale. Many participants were expats, seeing as the event did not receive much coverage ahead of time in Chinese-language media, and there was comparatively heavier coverage in English-language media. There was not any stage or speaker truck set up, nor were there slogans, chants, or speeches. The Taiwanese LGBTQ civil society organizations and NGOs, as well as corporate sponsors, that are usually at the October pride parade did not seem to be present. Though some music was played, this primarily came from speakers that participants themselves had brought. The event did not have any other form of amplification. 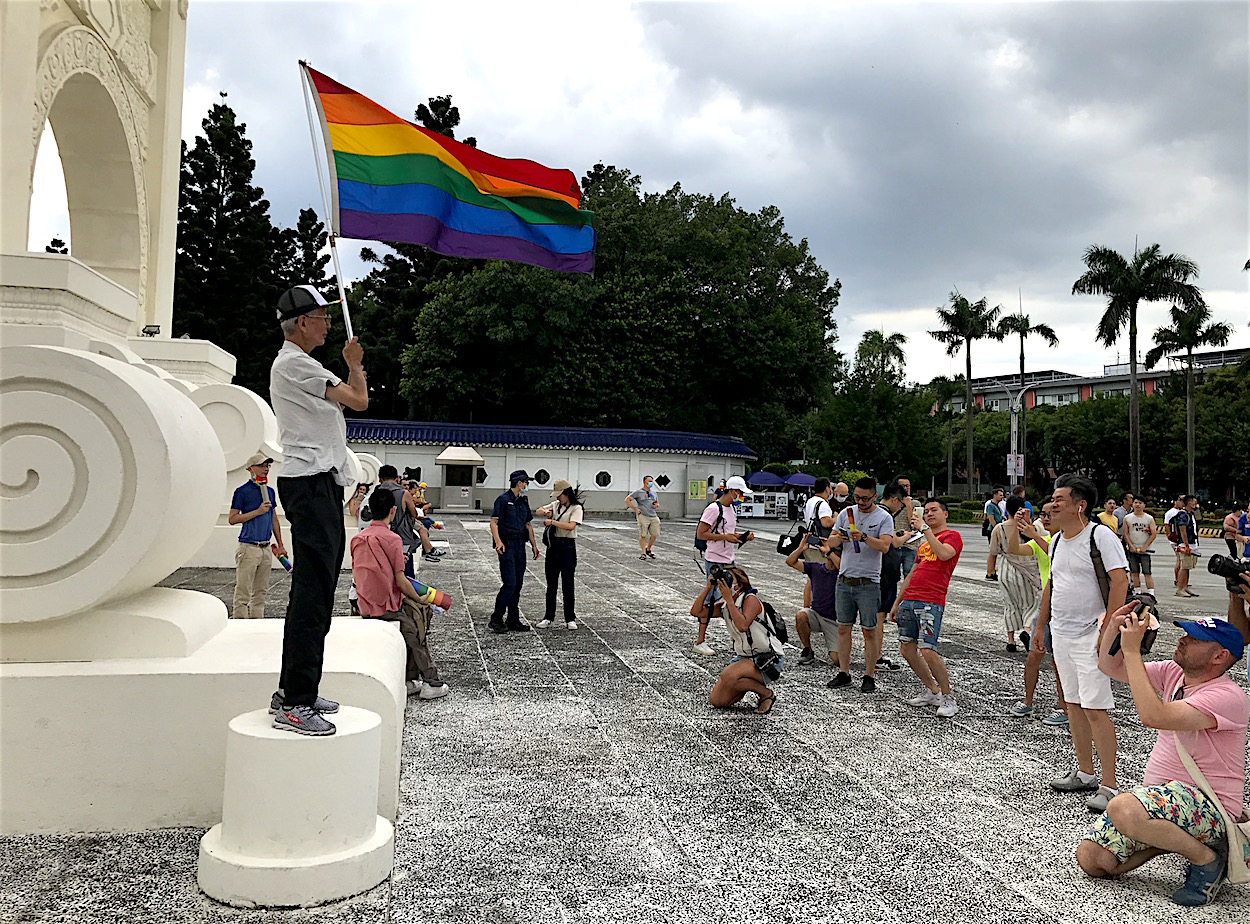 Chi Chia-wei while at the demonstration. Photo credit: Brian Hioe

Chi Chia-wei, whose legal case resulted in the ruling by the Council of Grand Justices in 2017 that paved the way for the Legislative Yuan to pass legislation legalizing gay marriage last year, was among those in attendance. Among the attendees were also individuals carrying Hong Kong and Tibetan flags, as well as banners reading “Black Lives Matter” and “Black Trans Lives Matter.”

The event largely went without incident. However, at one point, police threatened to arrest a female expat participant in the march who was not wearing a bra under her t-shirt, requiring the intervention of organizers. Police relented after she covered up, but took down her information. 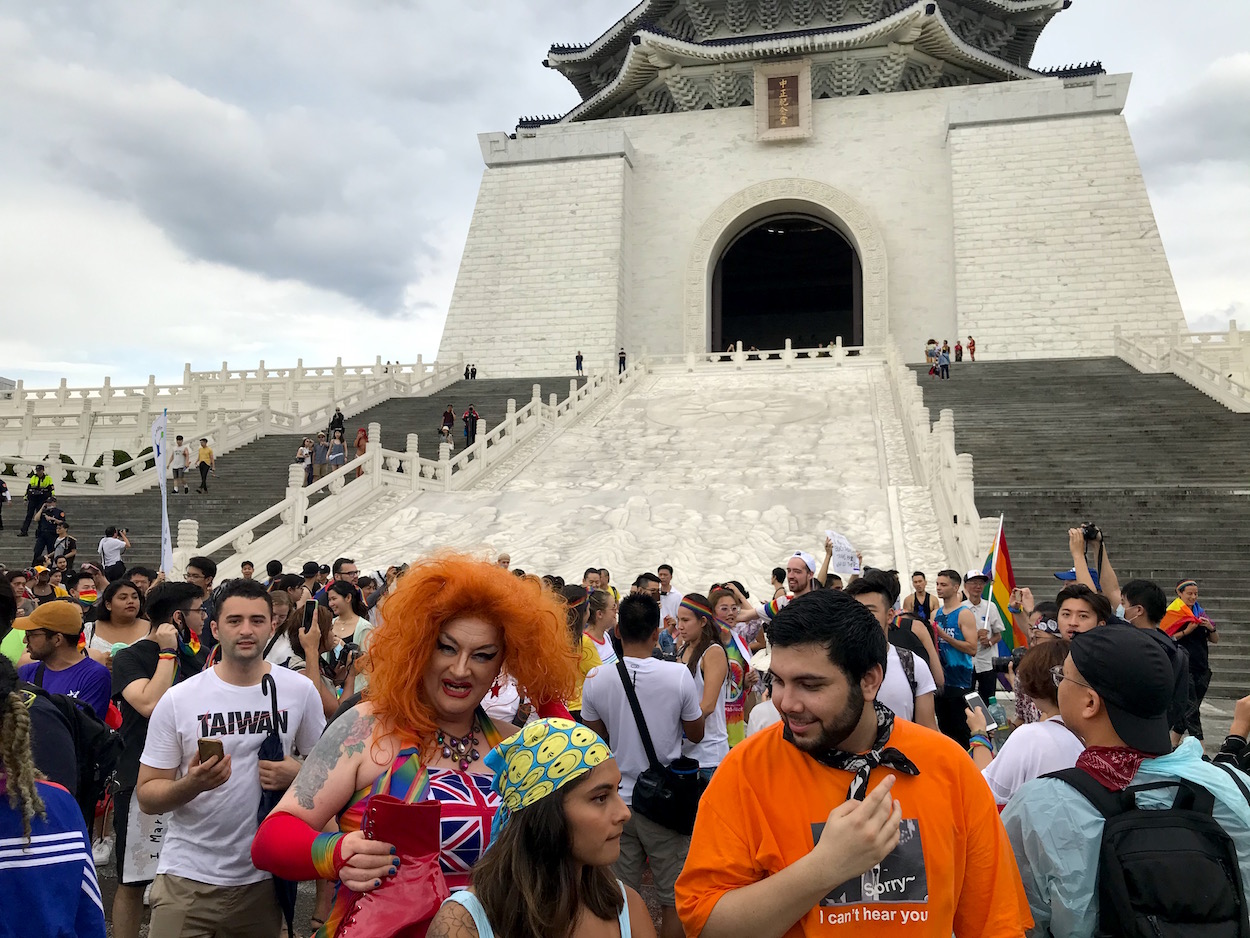 It is to be seen what the COVID-19 situation will be like in October, when pride is normally commemorated in Taiwan. While Taiwan normally sees a large number of international visitors during October pride, it may be that Taiwan will remain one of the few places in the world able to commemorate pride in October, and that pride will have to take place with only participants already in Taiwan.

Likewise, though there were not any themes or demands that were strongly emphasized by today’s pride parade, the event should also serve as a reminder of the many challenges still faced by the LGBTQ community despite Taiwan having legalized gay marriage. 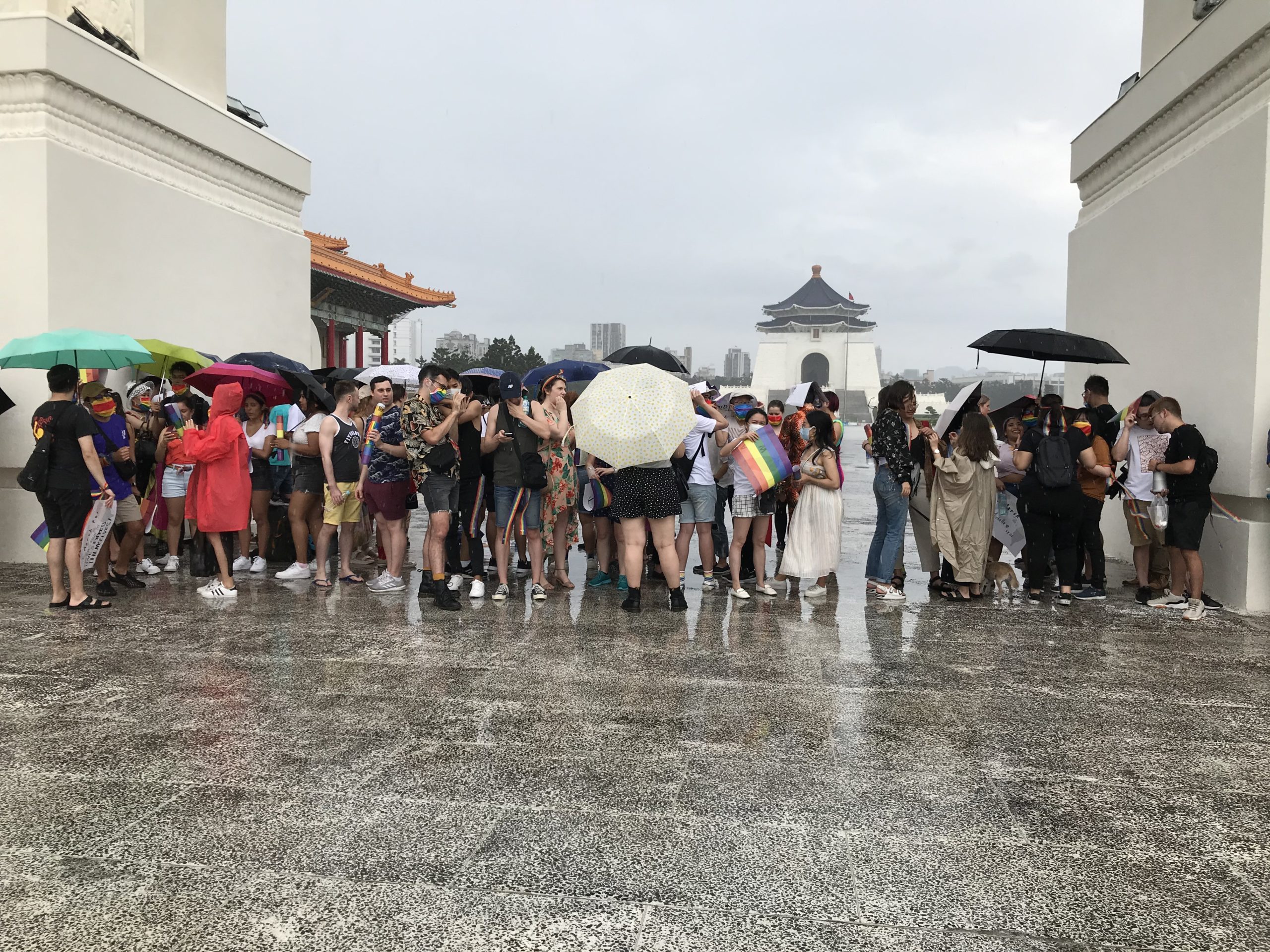 For example, as the large number of expats present at today’s pride parade should perhaps call attention to, transnational gay marriages can only take place in Taiwan if both individuals are from countries that have legalized gay marriage. A campaign was launched in May to remove these limits on transnational gay marriages in Taiwan. Moreover, gay couples are only still allowed to jointly adopt children that are biologically related to one of them, and Taiwanese law currently prohibits all forms of surrogacy.

Members of the LGBTQ community being shamed in the media or by society writ large still is a prevalent problem, as observed in the controversy which resulted from Mirror Media outing Internet celebrity Wei Wei earlier this month—not the first time that the tabloid has outed celebrities either, to few repercussions. These challenges and others remain to be addressed.