Review: Interminable Prescriptions for the Plague

JUST NORTH of Taipei Main Station, a black mannequin stands in an open plaza. Emerging from torrents of white medicine bottles, the mannequin wears sheets of white plastic threads that cling to its body like a second skin. Next to it, a red cargo container with portraits dimly-lit inside; the other end, a giant screen that plays two astronauts, dry-fucking in space suits.

Titled “Interminable Prescriptions for the Plague,” this art show opened in early October and is now on view for free at the Museum of Contemporary Art Taipei.

The “Plague” in question is HIV/AIDS—perhaps the only permissible instance to invoke the epidemic that haunts our memories of a specific time and place. 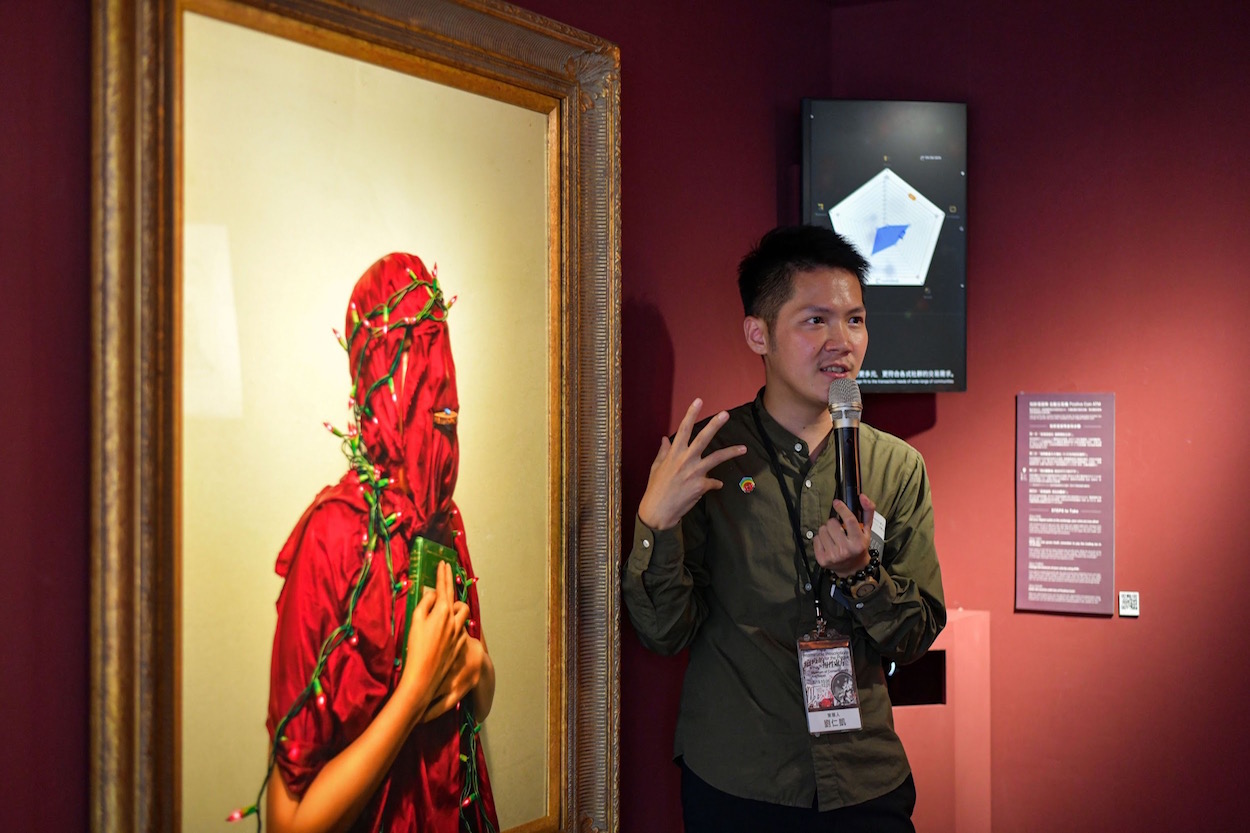 Liu, in front of his only piece in Interminable. Photo courtesy of the Museum of Contemporary Art Taipei

However, as a show that brings together 17 artworks from 20 artists, Interminable disposes of the notion of a generation lost or a community devastated. The show presents individuals practicing vastly different lives somehow gathered here, whose works all simply happen to contain, entertain—indeed, host the polemic of HIV/AIDS.

The ambitious scale for the exhibition came despite it being the curator Kairon Liu’s debut; in fact, as a photographer, Liu was at first positioned to open a solo-show. In conversation, Liu said that the decision to move past that stage developed quickly. His self-described juniority and firm refusal to present a singular voice on HIV/AIDS pushed him to decenter his own perspectives, and give space to others instead. In practice, part of this space seemingly belongs to the audience as well.

During the opening ceremony, representatives from various sponsors such as the Taiwan Tongzhi (LGBT) Hotline, Taiwan Lourdes Association, and the National Human Rights Museum came forth to deliver their speeches. Speakers invariably praised the opportunity for “ordinary people” to find out more about HIV/AIDS through the public medium of art, where Interminable further serves as a platform for discussion and dialogue. What is at stake, of course, though it remains unspoken, is that Interminable is an unwilling intervention to clean up after the state education system, which has failed to provide a comprehensive understanding of a global epidemic too often weaponized by right-wing politicians and religious conservatives to vilify sexual/gender minorities. 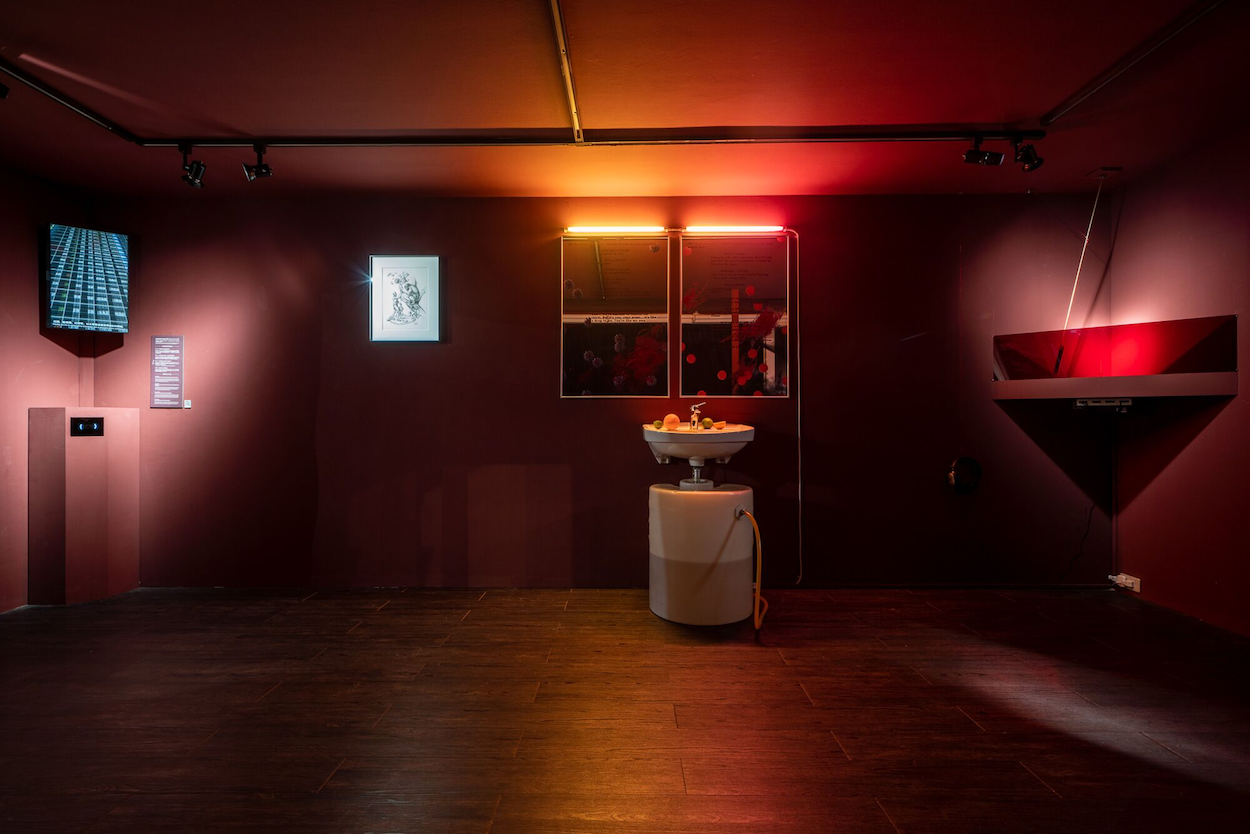 Photo courtesy of the Museum of Contemporary Art Taipei

One might question this optics of “open dialogue”. We certainly should challenge the subjugation of minority issues under the carnivalesque lenses of public debates. Yet, for a country that evidenced an intolerant demographic towards marriage equality and comprehensive sexual and LGBT education in public schools, in addition to having teetered dangerously close to the edge of opening abortion rights to national referendum, it is arguably a compromised yet necessary approach of civic activism translated into community engagement and public outreach in Taiwan.

The effectiveness of this attempt to rehabilitate HIV/AIDS in the eyes of the public falls short, however, when we find several missionary pamphlets deliberately left by Christian organizations near the art works. Online comments left by visitors that spare pitiful amounts of empathy also undercuts the good faith approach of this open forum.

In reality, then, framing a dialogue as something to happen merely between the “stigmatized” and the “average citizen” is insufficient in reach, unimaginative of art’s function and demeaning towards Interminable’s capabilities; rescaling the dialogue as occurring on a global scale and across different political movements is far more apt. Liu ensured this the moment he gave up the show to his artists: they in turn plug in their own connections with the world. 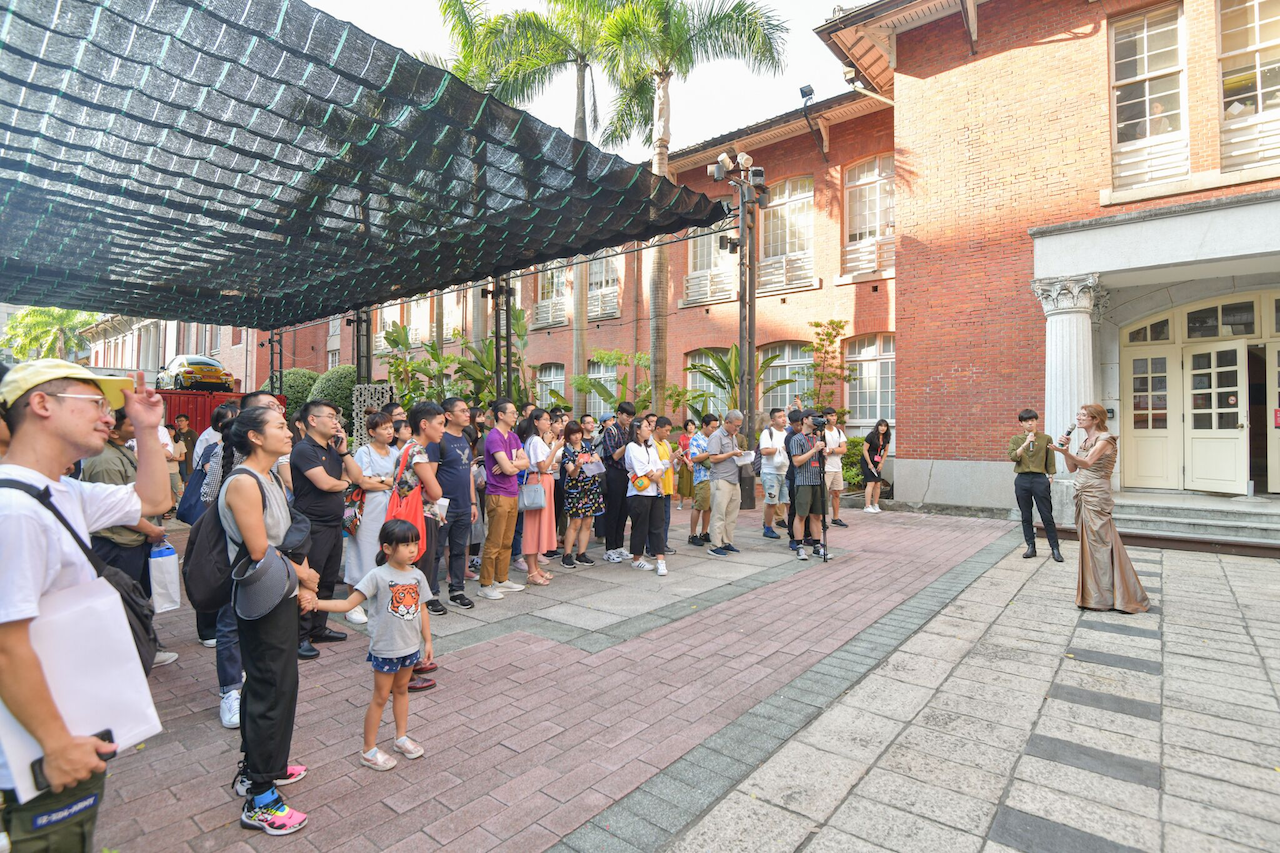 Marguerite Van Cook on the far right, speaking to her crowd. Photo courtesy of the Museum of Contemporary Art Taipei.

Amongst the participants present at the opening was Marguerite Van Cook, artist and activist based in New York and a member of the East Village art scene in the 1980s. During her opening speech, she stood beneath a giant screen playing her film, where her character leads the cast, digging haphazardly in a forest, looking for something—perhaps the unknown, perhaps an answer—or, as Van Cook suggested, the cast may be subconsciously burying her friends.

Having lived through the past four decades in New York, Van Cook also emphasized the need to look for a cure; not preventative measures, not an after-pill or whichever latest cocktail treatment that could manage the virus with the least side-effects—but a cure. The technology and science is already here, Van Cook urged, but we merely lack the funding and the political will.

Another participant who performed at the opening was Erick Lin, a Taiwanese poet and a member of the Persons with HIV/AIDS Rights Advocacy Association of Taiwan (PRAATW). As a poet, Lin’s poetry speaks to the contradictions of being at once infected/uninfected. When fears of impurity and contamination spread amongst those we encounter in daily life, concealment or disclosure becomes a point of tension. Lin also realized that Interminable was opening the same week that the Hong Kong Police Force implemented its mask ban. After he recited his poem at the show opening, he took out a gas mask and delivered an unplanned speech. 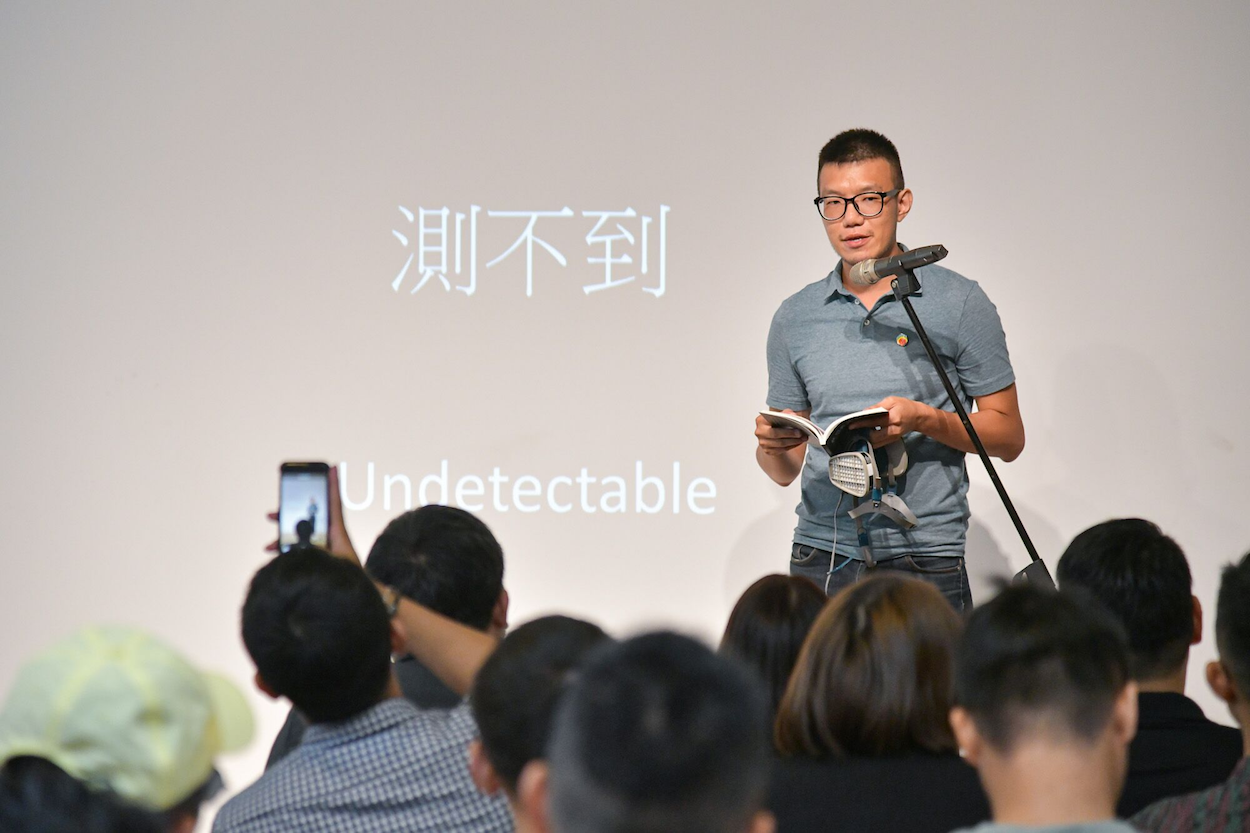 Speaking softly but with conviction, Lin points out that films featuring people living with HIV/AIDS (PLWHA) in the past have always obscured their faces and altered their voices to protect their identities. Yet today, the willingness of the Taiwanese public to experience things that are different enables him to be safe, even without a mask.

He paused, put on his gas mask, and continued:

“Decades ago, no one would have thought that HIV/AIDS could become an art show. If we did not have an open and receptive environment, this would never have happened.”

If one day our country becomes conservative, PLWHA and gender/sexual minorities will be the first target of censorship. The path to freedom was hard-fought, and I hope we can all cherish and protect our hard-won liberties. In a free world, we could decide whether or not to wear masks, or what kind of masks we would like to wear.”

Though Lin did not speak of Hong Kong by name, his meaning was understood. Where in Hong Kong the shopkeeper of a political bookstore could be arrested by Beijing, in Taiwan a recent film about the country’s past White Terror became a commercial success. Lin was also alluding to more than the freedom of expression: he was forcing the audience to reckon with not only the integrated nature of LGBT liberation and HIV/AIDS destigmatization but also the shared history of state violence and police brutality inflicted upon both queer existence and pro-democracy movements. 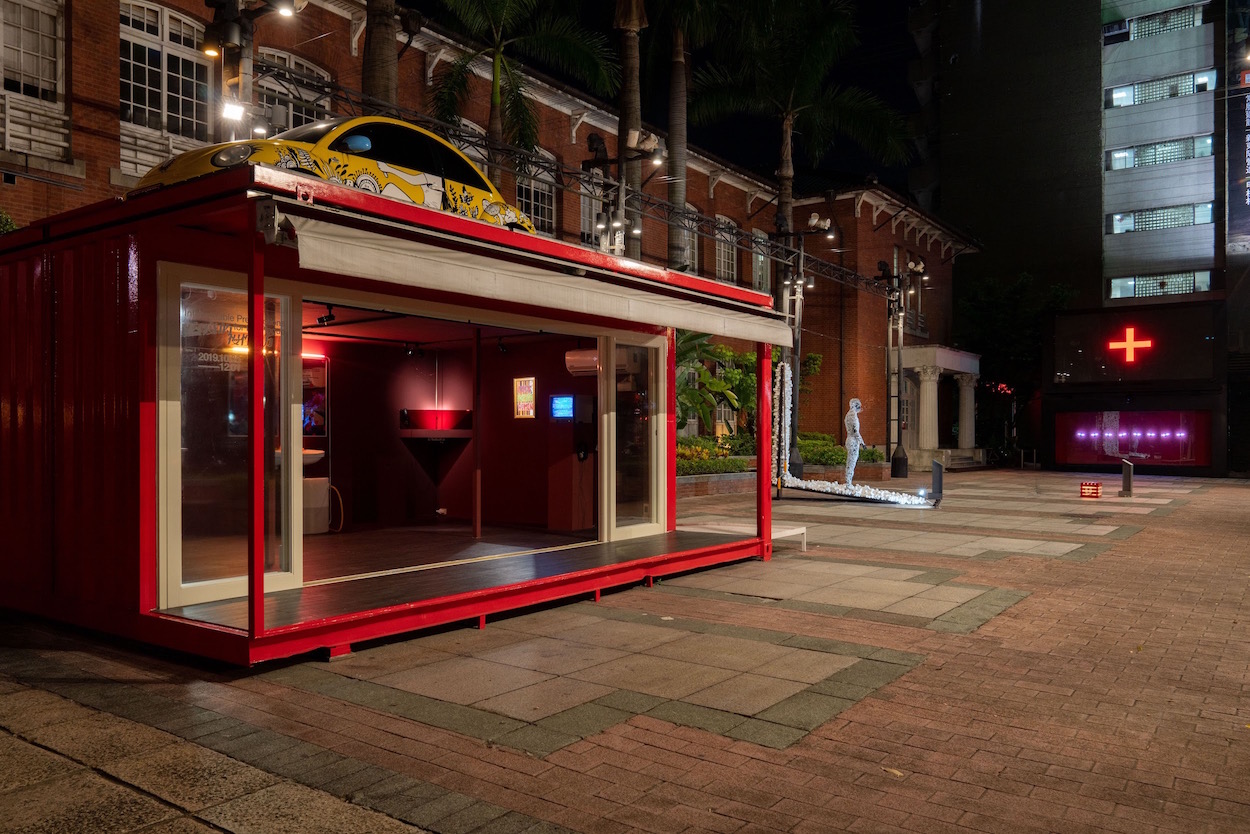 Photo courtesy of the Museum of Contemporary Art Taipei.

Political will. Van Cook had shared with me a funny anecdote when she cried for two weeks over a K-drama character that died in the show. She could not explain it; she felt a deep connection to that person, and, by extension, the cultural universe they inhabit. I think they are the same tears that people in her audience experienced when she performed two songs at the opening of Interminable. It is the same joy as international visitors flock to Taipei for the largest Pride in Asia. It is the same fear when people in Taiwan these days livestream the nightscapes of Hong Kong.

The same way that platforms of destigmatization cannot bring about justice for PLWHA without concurrent efforts to develop a cure, the artists also acutely felt that democracy may not progress until we rethink radically what it means to be of a people if that does not entail taking care of one another. To question, what it means to be responsible citizens: Who it excludes, where we bury them, and what then do we bring to democracy. The show ultimately demands us to ask why there are imprescriptible cures for a terminable plague.