PLANS BY CHRISTIAN groups to hold a referendum on abortion rights in Taiwan have met with backlash from medical groups and women’s groups but should raise concerns nonetheless. Namely, Christian groups opposed to gay marriage and other progressive causes have become politically organized in Taiwan within the past few years and, despite being a minority, sometimes possess the economic resources needed to launch large-scale campaigns to push for conservative changes to the law.

Medical groups and women’s groups have been critical of the push to limit abortion rights in Taiwan, citing that the claims cited by pro-life activists are unscientific, defy global trends, or aim limit women’s rights over their own bodies.

What is of note, however, is that there has not been any concerted push against abortion rights in Taiwan from Christian groups until relatively recently. Although Christians are a minority in Taiwan, comprising less than 5% of the population, they are influential voices within both major parties.

Conservative Christians seem to have become politically organized as a force in Taiwan after the Tsai administration made it a campaign promise in 2016 elections to legalize gay marriage. Conservative Christians were able to organize rallies that mobilized tens of thousands, including members of other faiths, and to successfully campaign for a referendum which voted down legalizing gay marriage through making changes to the existing constitution.

Taiwan still later legalized gay marriage, with the legislature adding new provisions to the constitution rather than changing the existing constitution in order to comply with the referendum result. Anti-gay groups claim that this is unconstitutional and have suggested that they still intend to legally challenge the Tsai administration regarding the legalization of gay marriage.

Christian groups were successful in forcing Tsai and the DPP to back down from active advocacy of legalizing gay marriage, seemingly having persuaded Tsai that there was sufficient social opposition to gay marriage that she would have something to politically lose for open advocacy of it. Christian groups were able to turn around the narrative on gay marriage from being viewed as an issue which few would oppose in Taiwan to one with seemingly more social opposition to than previously thought.

To this extent, Christian groups successfully created splits within Tsai’s DPP. The elderly pro-independence traditionalists of the Formosa Alliance have announced that they intend to seek a halt to gay marriages in Taiwan, claiming inadequate social consensus on the issue. It is very probable that their initial split from Tsai’s leadership of the DPP was also provoked, in part, by Tsai’s original intent to legalize gay marriage. Not all Christian groups were opposed to gay marriage. The Tong-Kwang Light House Presbyterian Church has been among the most active voices in support of gay marriage and there are a number of openly gay priests in Taiwan, but these groups were overshadowed by Christian anti-gay groups.

Nonetheless, one notes that anti-gay groups had a substantial war chest at their disposal, due to funds funneled from American anti-gay groups who likely saw Taiwan becoming the first country to legalize gay marriage in Asia as a matter of concern, as also bolstered by funding from billionaire Cher Wang, the founder of HTC. Much discourse regarding opposition to gay marriage was imported directly from America, with American Christian groups offering trainings to provide talking points and arguments against gay marriage to Taiwanese anti-gay groups. 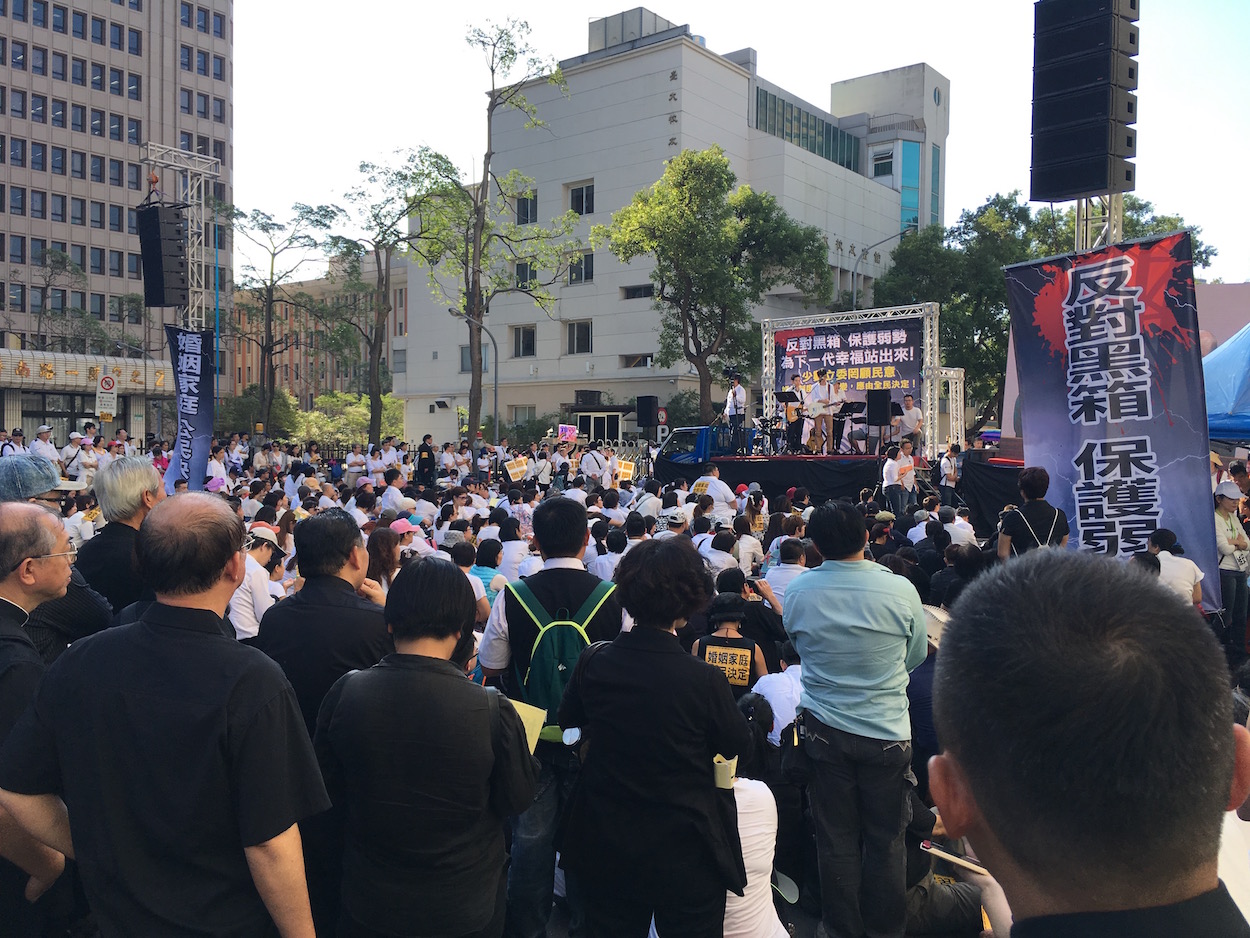 Yet it is a further question as to what splits this may provoke in Taiwanese politics, particularly among the pan-Green camp. Apart from opposition to gay marriage, the Formosa Alliance has also gained a reputation for misogyny against president Tsai Ing-wen, but they are currently running pioneering Taiwanese feminist Annette Lu as their presidential candidate. This may be as a way to allay charges of misogyny against the Formosa Alliance, although one notes that Lu is highly socially conservative and has provoked ire in the past for homophobic remarks and racist comments against Taiwanese indigenous. It is unlikely Lu would favor limiting abortion rights, but a push to limit abortion from Christian groups could perhaps even create a split between Lu and her own party.

It may be that abortion will become another wedge issue going into 2020 elections, then. That remains to be seen.