SCENES OF heated protest again took place in Hong Kong yesterday, in response to moves by the Hong Kong government to invoke emergency powers to outlaw the wearing of masks in public.

With the mask ban increasingly a possibility after Chinese National Day protests on October 1st, protests involved a number of fires set on roads and in MTR stations, police firing tear gas at demonstrators, and the destruction of MTR equipment by demonstrators. Demonstrations were quite widespread across Hong Kong, involving thousands, and taking place in Causeway Bay, Mong Kok, Wong Tai Sin, Tsim Sha Tsui, Chai Wan, Kwun Tong, and other locations. 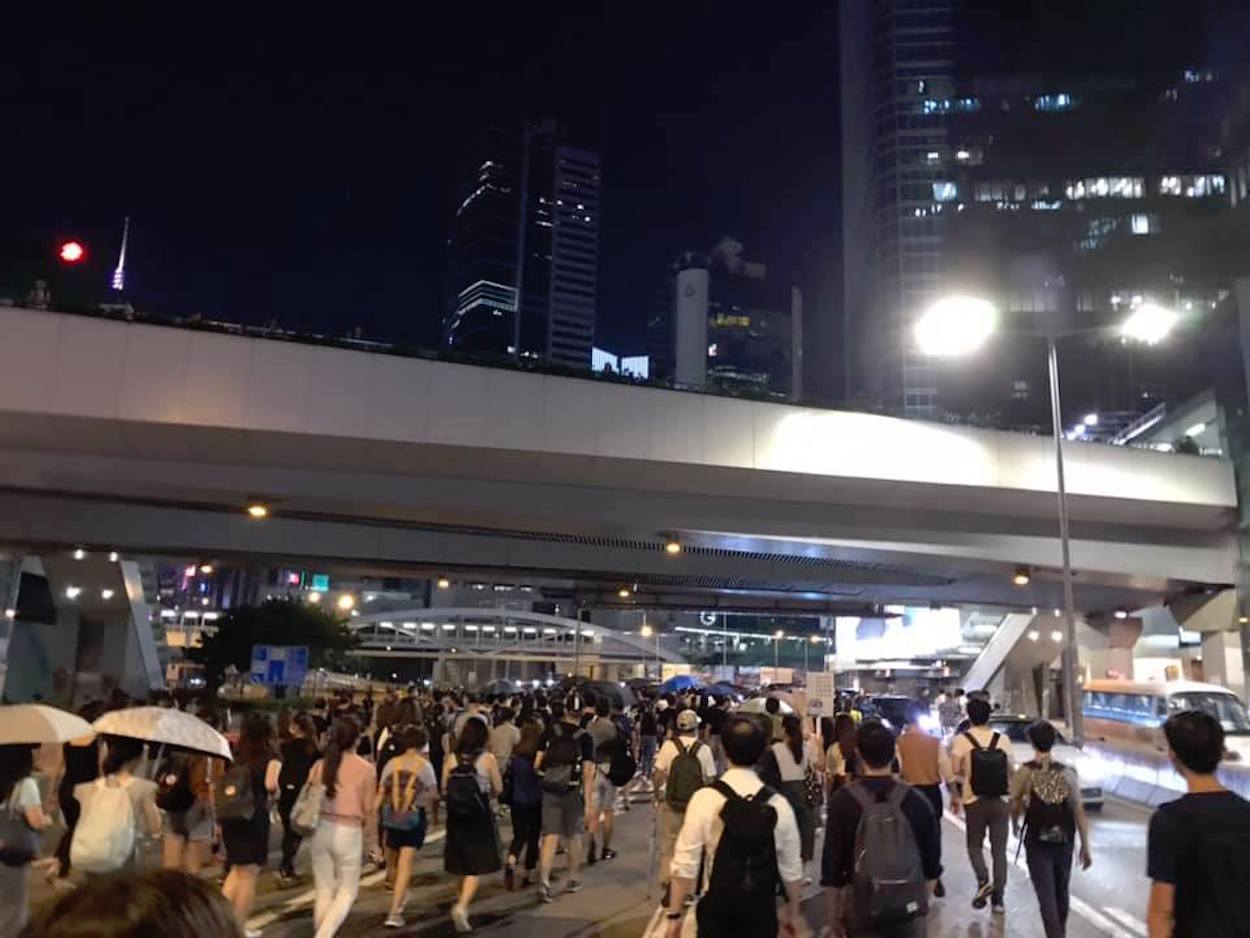 By midnight yesterday, courts had struck down an emergency injunction filed in an attempt to block the law, which argued that the mask ban would infringe upon basic rights of assembly and free speech in Hong Kong. On the other hand, the Hong Kong government argued that it is the public interest and that this was a needed measure to address violence. The law took effect at midnight.

In particular, the invocation of emergency powers by Hong Kong Chief Executive Carrie Lam, is wide-sweeping, drawing on British colonial-era legislation from 1922 originally passed as a means of cracking down on labor strikes. Any semblance of “rule of law” in Hong Kong vanishes entirely through the invocation of such powers, to which extent one also notes that the continuity between British colonial rule and Chinese rule in Hong Kong in the actions of the present Hong Kong government.

Indeed, banning masks in Hong Kong may be as wide-sweeping a measure as the proposed extradition law which originally prompted the demonstrations which have rocked Hong Kong for the past twenty weeks, but the Hong Kong government’s efforts to pass the extradition law at least went through the motions of due oversight procedures. The Hong Kong government has cast off any pretensions of being democratic through the invocation of emergency powers, it seems. Emergency powers allow the Hong Kong Chief Executive to “make any regulations whatsoever which he may consider desirable in the public interest.” 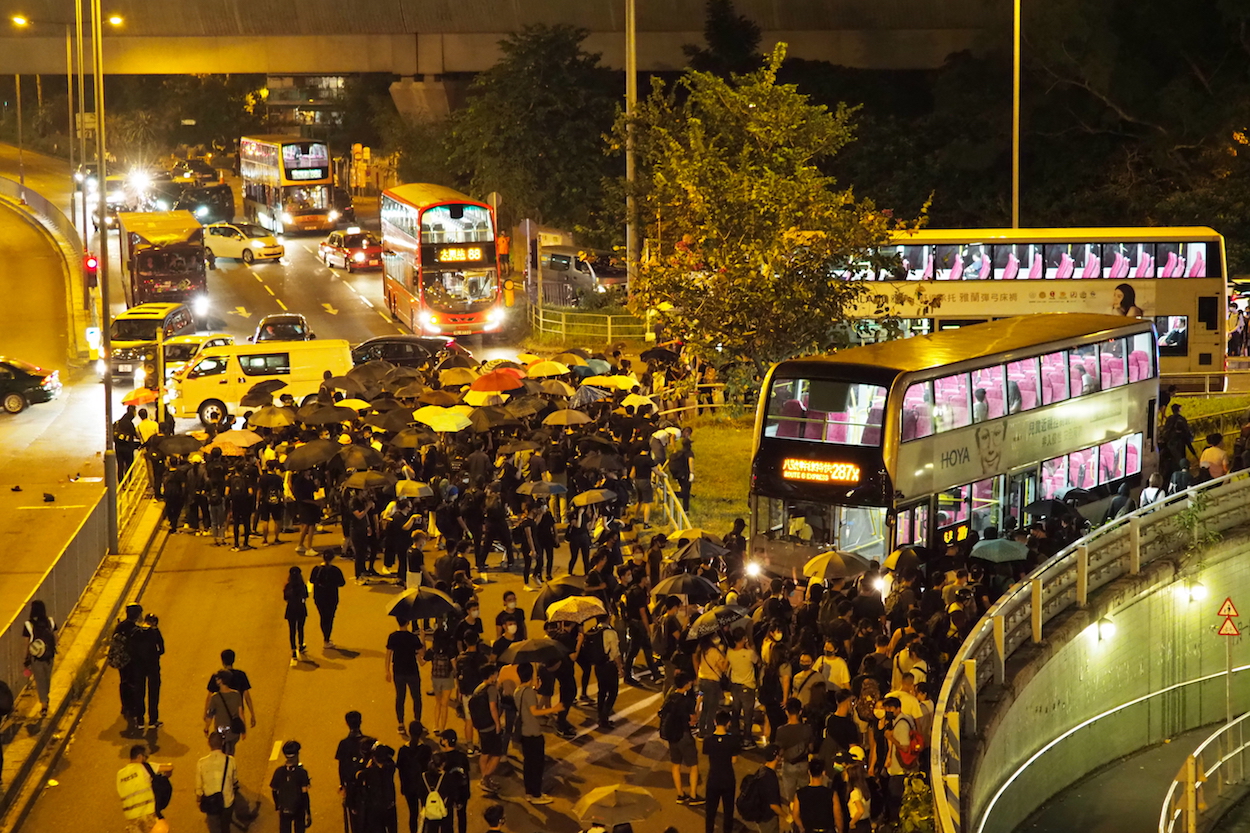 It is another question entirely as to whether the Hong Kong government genuinely has any way of enforcing a mask ban. Under the new mask ban, wearing masks could be punished by one year in jail or a fine of 25,000 HKD, but it is physically impossible for the Hong Kong police to prevent demonstrators from continuing to wear masks at demonstrations, as they frequently do in order to avoid being identified. Charges of “illegal assembly” could lead to a five-year jail sentence and charges of “rioting”” could lead to a ten-year jail sentence. The mask ban will, however, embolden police to act even more violently against demonstrators.

Either way, the mask ban contributes to the sense that Hong Kong exists under martial law conditions in what is increasingly a de facto police state. Contributing to this sense yesterday was the fact that all MTR services were suspended across Hong Kong, as a means of preventing demonstrators from using the MTR to escape from police or link up with other demonstrators—effectively suspending the freedom of movement for all Hongkongers in order to prevent protest. MTR suspensions have become increasingly common as a response to protests, but shutting down the entirety of the Hong Kong MTR has proved greatly angering of members of the public.

As observed in the protests before and after the mask ban was passed, the invocation of emergency powers by Carrie Lam could provoke a further escalation in the intensity of demonstrations to date. Comments by currently imprisoned localist Edward Leung dating back to 2016 in which Leung notes that a mask ban was one of the key events that set off political unrest in Ukraine in 2014 have been widely circulated online in response to the mask ban.

For example, in response to the mask ban, demonstrators in the MOSTown shopping mall in Hong Kong last night declared a provisional government and called for the dissolution of the present Hong Kong government. Although this proved an abortive action, perhaps not too dissimilar from the abortive attempt to establish a long-term occupation of the Hong Kong Legislative Council on July 1st, it is to be seen whether there will be more attempts by Hong Kong demonstrators to call for a provisional government to be formed—an idea which seems to have recently emerged and may be gaining traction among some circles.

Key development in HK- hundreds, denouncing the HK Gov, declared establishing a provisional govt in a shopping mall in Ma On Shan.