IF THE ARTWORK of Hwang Buh-Ching can be said to be concerned with the artistic representation of “homeland,” as his current exhibition “Homeland: Edge of Desolation” at the Museum of Contemporary Art, Taipei suggests in representing Taiwan, Hwang points to both falsity and authenticity. Much of Hwang’s work consists of materials gathered from the environment of Taiwan and refashioned into art, most prominently old industrial equipment, mannequins, and driftwood. In this, Hwang crafts an image of Taiwan as quintessentially an island nation, as much of his artwork concerning the notion of “homeland” features the representation of ocean prominently and his work displays concern for the “industrial desolation” which might be endangering of Taiwan’s seaside environment. 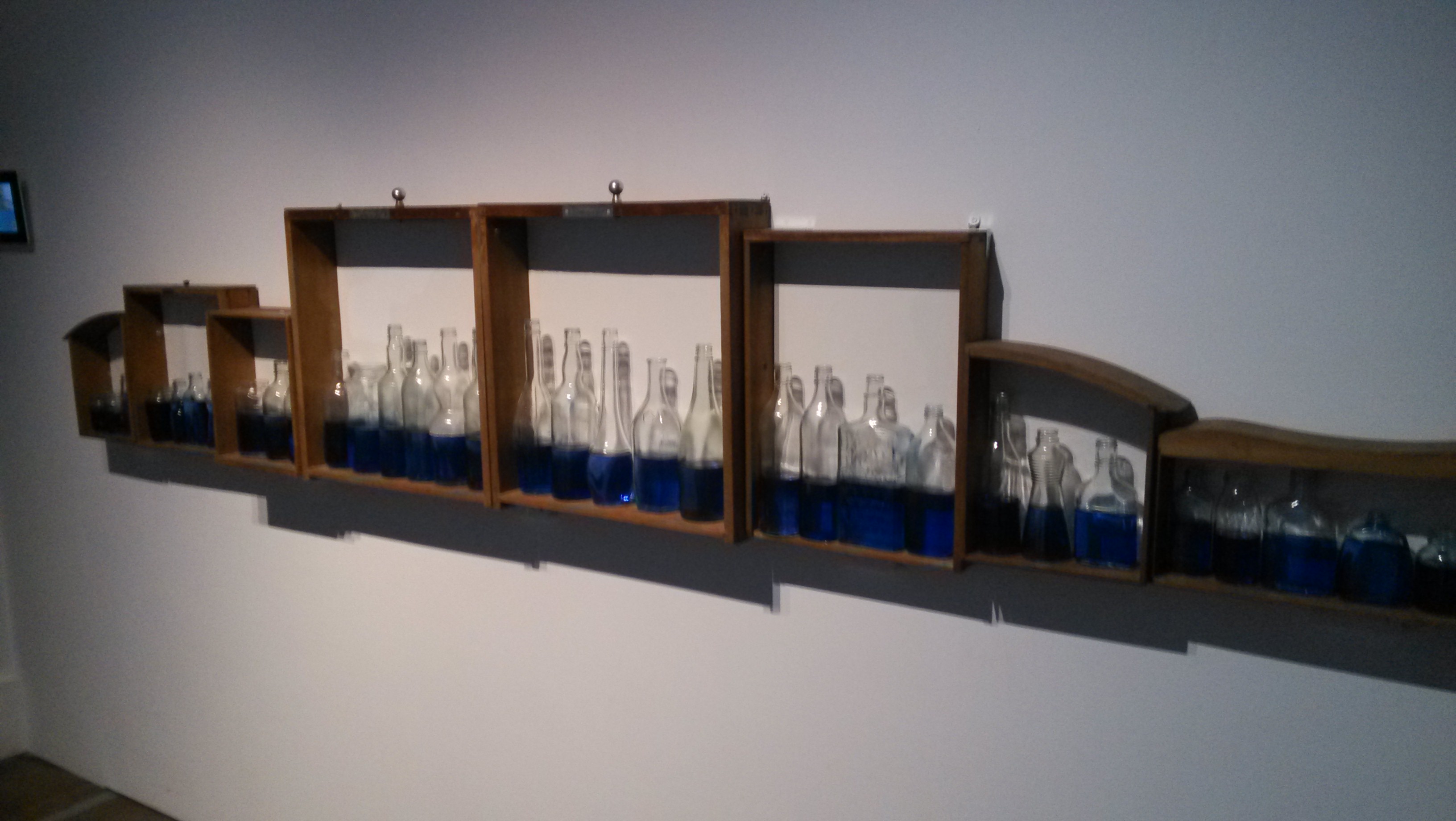 Hwang seems to have crafted out his art out of gathered materials to attempt to represent Taiwan without mediation. Nevertheless, in works such the 1994 “Blue Memory,” Hwang poses the possible falsity of his own representation—the work, consisting of a set of bottles of dyed-blue water, implies the simulacra nature of memory in necessitating the artificial preservation of an unreal image that can only be a fictive representation of it as reality. So, too, does Hwang point to the corrosive aspect of memory; while Hwang points to authenticity in gathering the materials for his artworks from life, he presents what he makes from these materials in most cases in some form of degradation. An example would be “Memory of Bicycle,” featuring a rusted bicycle representative of the memories Hwang has attached to his father carting fruit and vegetables on an old bicycle for the Hwang family’s grocery while struggling to make a living after the Great Flood of 1959. 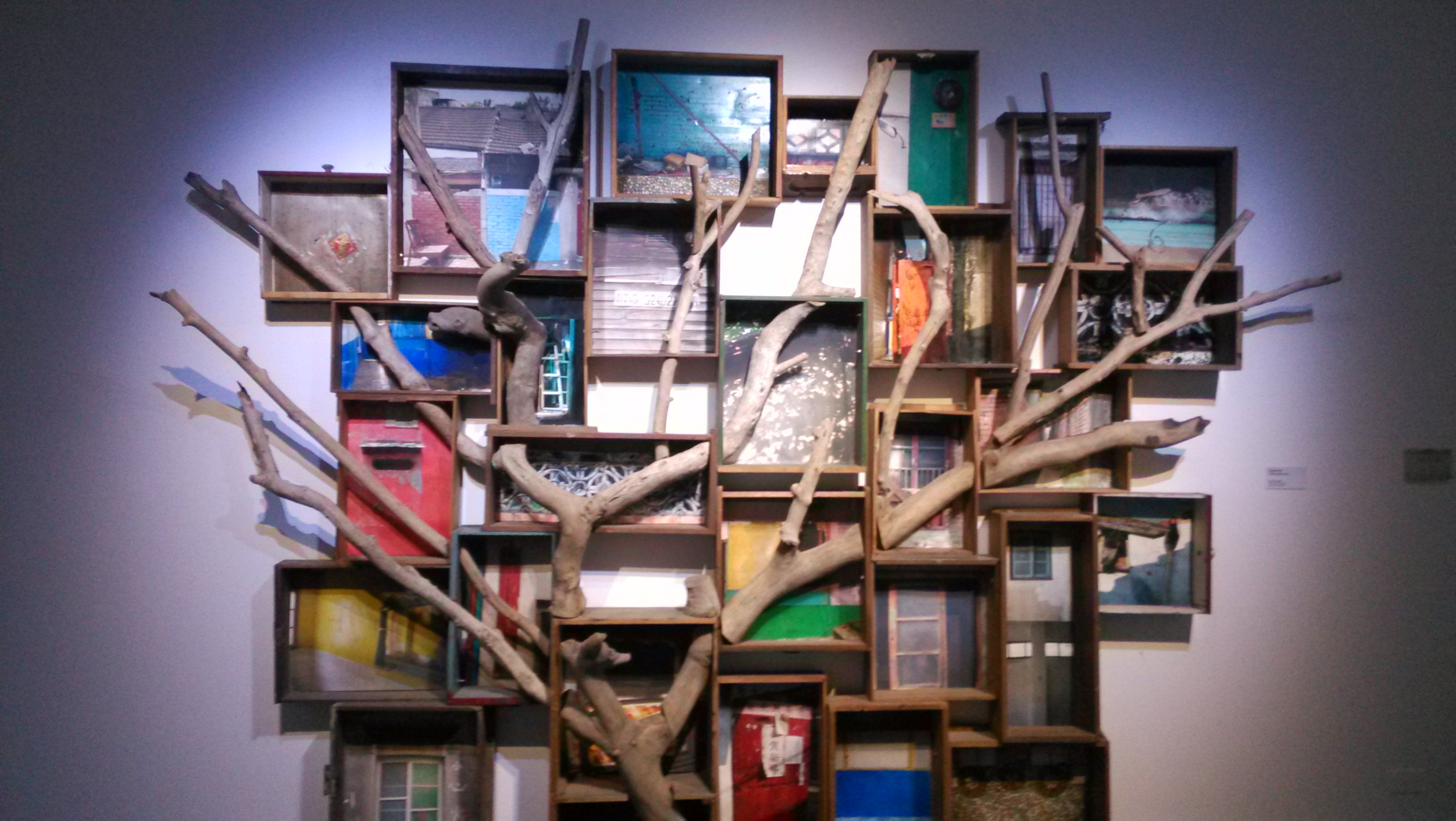 Overall, Hwang suggests the importance of memories of homeland to identity. “Vanishing Memory,” for example, features a series of photographs anchored together within a boxed framework by a tree. This would intimate the necessity of memory to rootedness, but also that memories are constantly in a process of dissolution. Moreover, even the referents of memory are also constantly under the threat of dissolution. Indeed, much of the places that one might feel nostalgic towards in Taiwan are constantly facing the threat of being uprooted, with development necessitating the destruction of the old in favor of the new. In this fashion, Hwang hits upon something in capturing a social issue in his artwork through the exploration of his personal experience without any slant towards propagandizing the issue.

However, in depicting “homeland,” one must also point to a certain gendered lens in Hwang’s work.  Hwang, of course, depicts “homeland” from the perspective of the male artist, but what bears pointing out is the gendered nature of that depiction. A recurring thematic in Hwang’s work is the use of a female figure, usually a mannequin, or a cast-iron framework in the shape of a female torso. 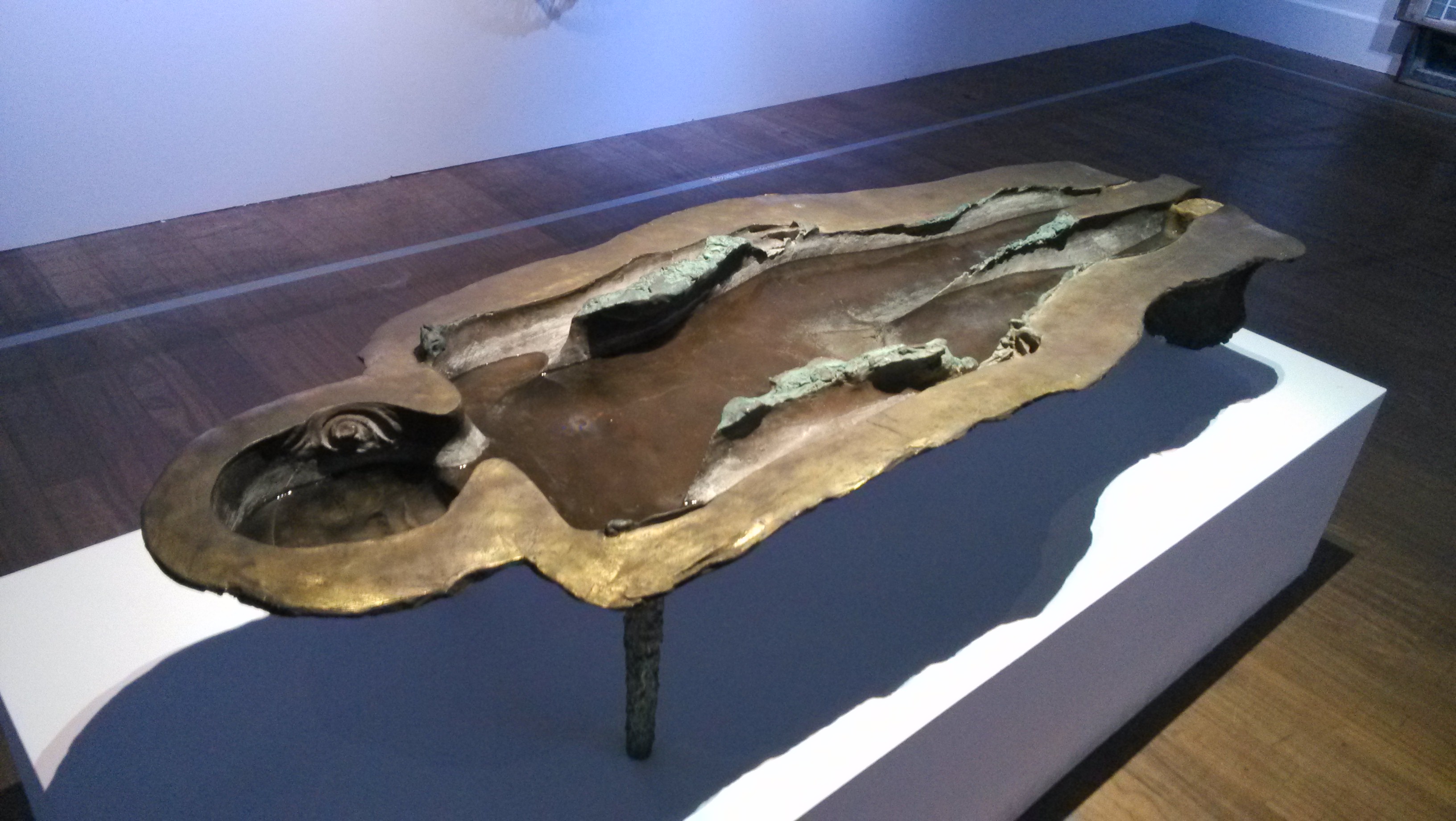 There are times in which Hwang’s use of female figures is purely as an expression of personal memory.  The 2008 work, “Pink Bed”, for example, employs a female nude made out of seeds attached to a bed as a representation of Hwang’s since-deceased wife. 2005’s “Drifted Wife,” featuring an impression of a woman in cast-iron, and lingering traces of water in the impression, and would seem to be similar in conception. 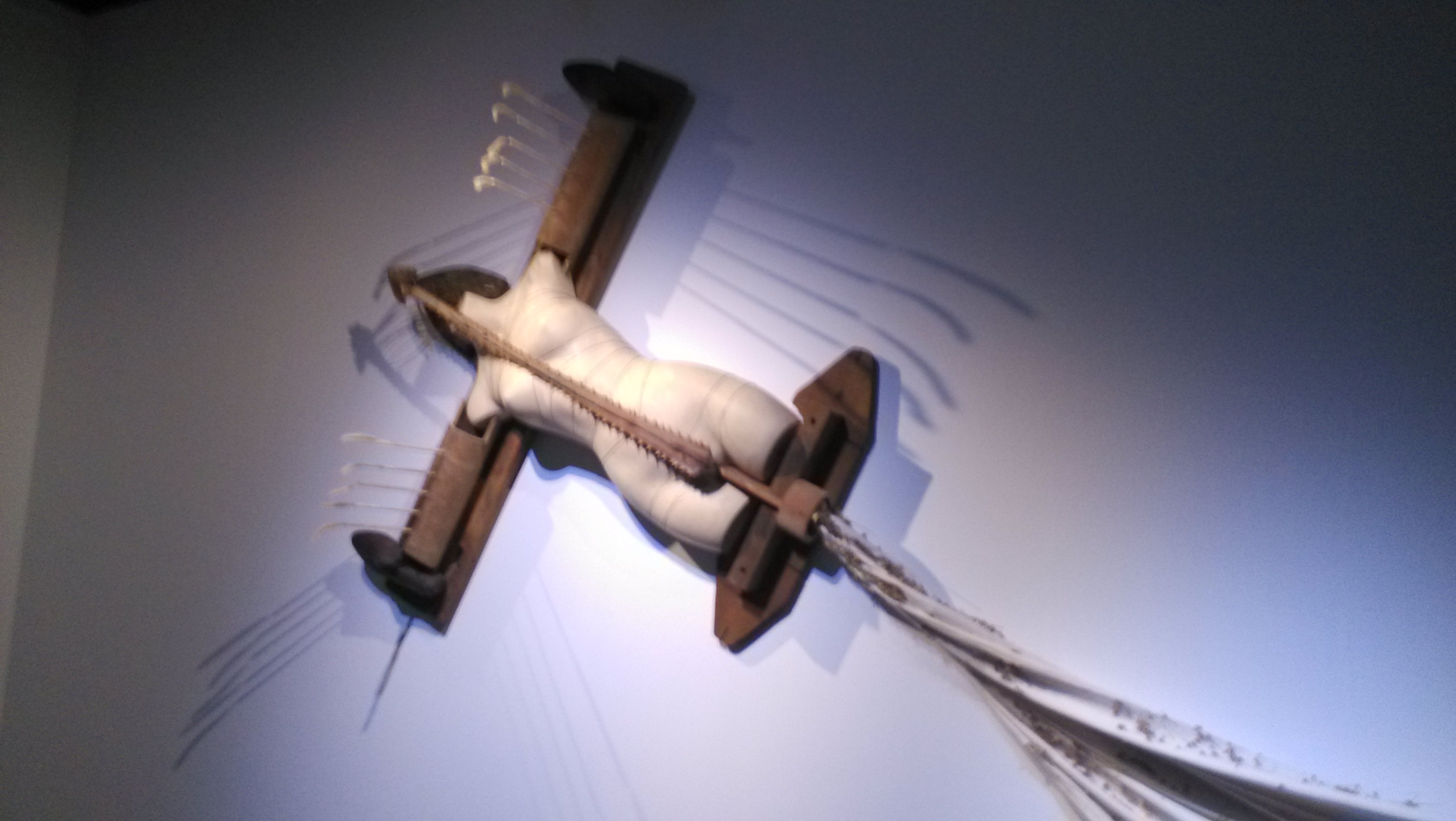 Yet what is to be interrogated is the degree to which Hwang associates the powers of nature and creativity with femininity, that is, the notion of woman as life-giver or producer of life, and the signification of “homeland” in female terms. Two works in particular tie the dream of human flight with the female figure, “The Desire of Flying” and “Butterfly”, both of which are female figures attached to frameworks made out of reclaimed garbage that form wings. If the theme of Hwang’s artwork is homeland and his artwork poses homeland as something under the threat of dissolution, one speculates as to whether he poses this in sexualized terms. Hwang does, however, suggest the possible voyeuristic and projective nature of his enterprise in “Water – Life,” a female torso with a rose where its heart would be, and a bottle of water in its lower regions, “Memory of Life II” in which the head of a woman is embedded upside down in a frame, and “Vanishing,” which places pin-up images of woman in a case. Hwang may not be unaware of these potential dimensions of his work.

Although Hwang’s work at large faces the risk of breaking down into facile oppositions between nature and human technology, certain works point to a more complex relation between nature and people’s influence upon it than one of pure opposition, or the possibility of such a relation. The aforementioned “The Desire of Flying” and “Butterfly” are cases in point, but most prominently in the exhibition in this vein would be “Recounting,” a installment which features a number of birds in cages placed on top of vanities, in a room bookended by two representations of human bodies on one wall, and a gigantic hand made of reclaimed material on the opposite wall. Hwang’s intention in using the birds is not merely to suggest the unfreedom of the birds in their entrapment in their cages, but a means by which their inhabiting of the cages adds to the room’s overall aesthetic quality. Though the expression of what Hwang means to accomplish through the interplay of the birds and cages is not entirely lucid, the general effect is to suggest Hwang’s belief that some more amiable relation of human beings and nature than their consumption or entrapping of nature may be reached. 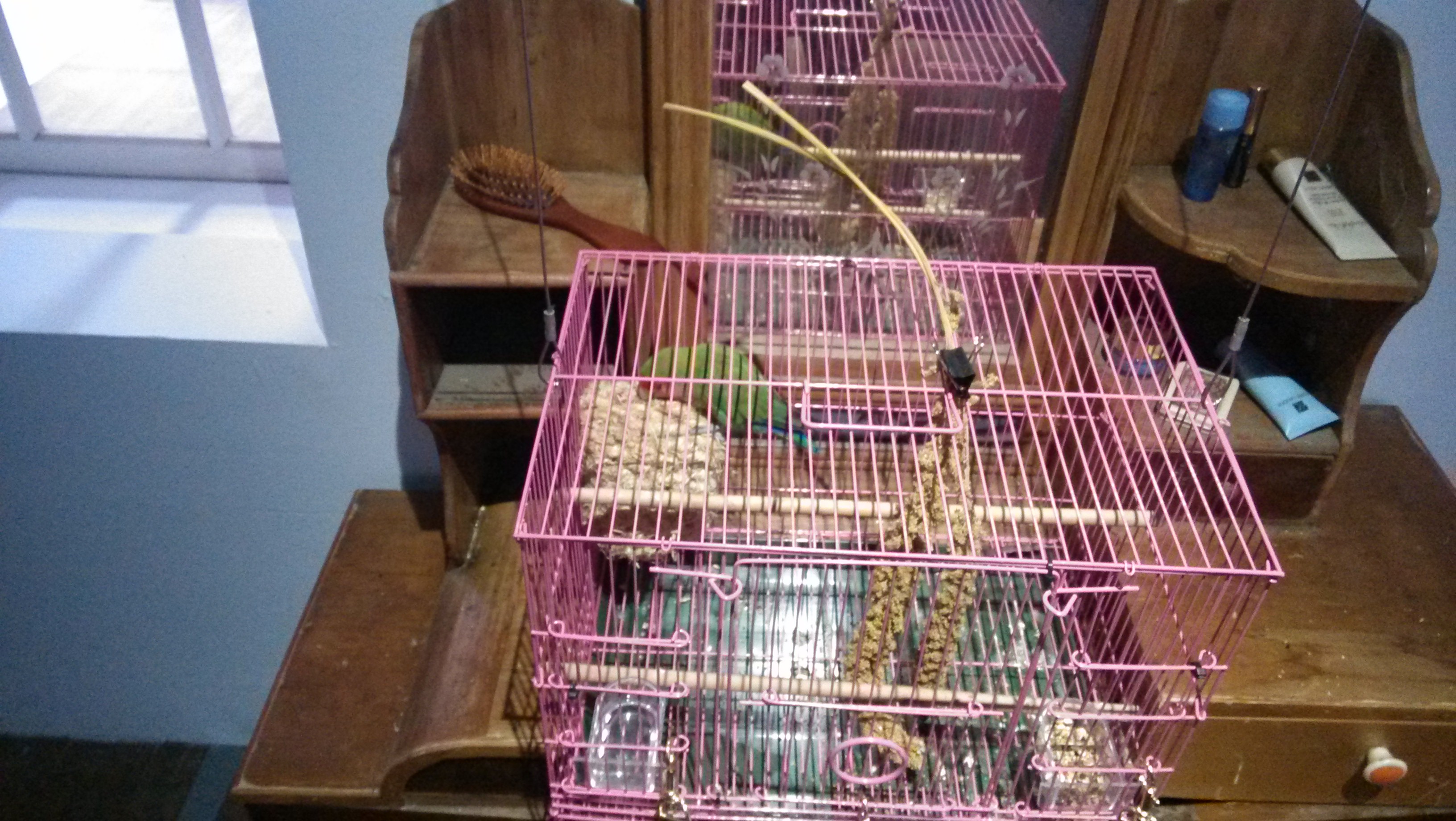 Hwang’s work points to certainly possibilities, but does not fully develop all of them.  Yet one may examine his explorations and gain something from them nonetheless.

Homeland: Edge of Desolation runs at the Museum of Contemporary Art, Taipei until August 24th.