CLASHES TOOK place between police and demonstrators at Hong Kong International Airport yesterday night, with pepper spray being fired in the airport. Yesterday was the fifth consecutive night of protests at the airport, although after a spate of police violence on Sunday night, Monday saw calls for a larger demonstration to shut down the airport.

While demonstrators mostly withdrew by nightfall on Monday, with warnings of an imminent police action, demonstrators returned yesterday to continue the protests. As a result, after a certain point in the afternoon, flights from Hong Kong International Airport were canceled both yesterday and Monday.

Apart from an incident in which a police officer drew his gun on demonstrators, having had his baton taken away from him after attacking an unarmed woman, two incidents involved members of the crowd tying up two Chinese nationals. One such individual was suspected to be a Chinese police officer, after dropping identification that netizens claimed matched an individual found to be part of the Shenzhen Public Security Bureau surnamed Xu.

The second individual was later identified as Fu Guohao, a reporter for the Global Times. Fu was wearing a press vest, but reportedly did not have press credentials on him to confirm that he was genuinely a journalist, and he was found to have a shirt stating “I Love Hong Kong Police” in his bag. Fu was detained after taking pictures of protesters’ faces, stated to demonstrators that he supported the Hong Kong police, and that they could beat him if they wished, the quotes of which have no gone viral online in China.

Both were later carried to ambulances outside, though crowds seemed initially unwilling to allow Xu, who appeared to have collapsed, through to the ambulances.  Much criticism has centered on demonstrators’ responses, particularly from western commentators online, as though this somehow discredits the apparent entirety of the movement. Police eventually retrieved the man surnamed Xu after using pepper spray against the crowd.

Yet one does well to remember the far disproportionate responses by police against demonstrators through the course of the movement, including shooting out the eye of a demonstrator on Sunday, applying enough force to nearly break a demonstrator’s teeth, or undressing a female demonstrator and refusing to allow her to put on her clothes. To this extent, one notes that police tactics have sowed a great deal of distrust among protesters, in using plainclothes cops as agents provocateurs, and using what are thought to be deliberate ambulance calls in order to disrupt protests. It is not surprising that police actions have led to such results. Indeed, multiple demonstrators were beaten bloody by police in the process of retrieving Xu. Police have, in most cases, been escalatory forces of violence in demonstrations to date.

It is also to be noted that protesters later apologized for their actions in the airport in the form of an anonymous poll, an interesting development for an ostensibly leaderless movement. Various shows of contrition have emerged online after the incident. 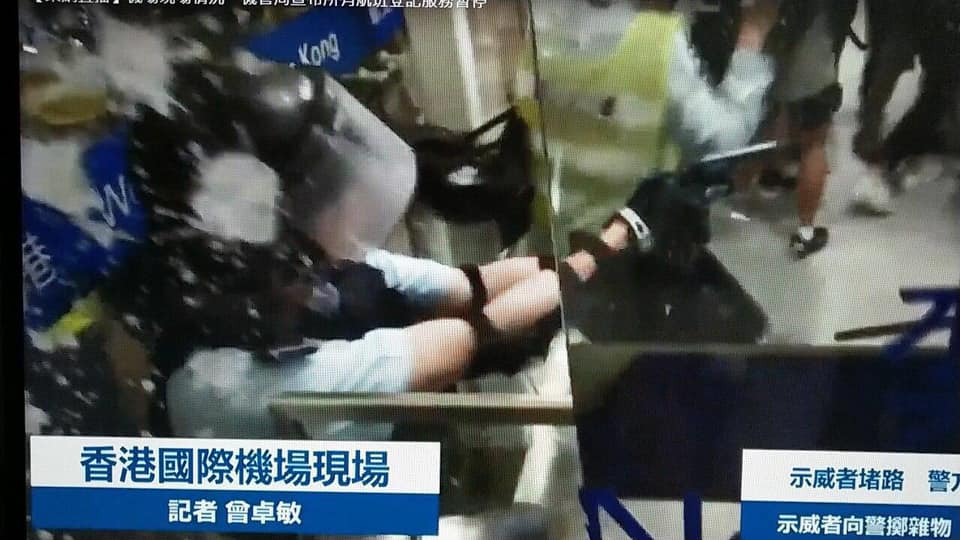 Either way, protests are expected to continue in Hong Kong, not only in Hong Kong International Airport, but with demonstrations planned in Chater Garden, Hung Hom, To Kwa Wan, Tsuen Wan, and Kwai Tsing, and a mass demonstration called for in Central by the Civil Human Rights Front.

In the meantime, the Chinese government continues with efforts to intimidate protesters, with the Hong Kong and Macau Affairs Office issuing a statement referring to “violent extremists”, and releasing video purporting to show troops drilling in neighboring Shenzhen. In an unusual shift, American president Donald Trump claimed on Twitter that American intelligence shows troops gathering in Shenzhen, that he “hoped nobody gets killed”, and that he was not sure why some blamed America for the protests. Trump previously stated that he viewed Hong Kong as an internal Chinese matter and referred to demonstrators as “rioters,” a phrasing criticized as echoing the rhetoric of the Chinese government. Trump seems to have again echoed Chinese efforts to stoke fear by suggesting that Chinese troops are indeed gathering in Shenzhen, yet providing little proof of such claims.

The next direction of protests in Hong Kong remains to be seen, then.