AN ENVIRONMENTAL demonstration organized by thirty environmental groups took place earlier this afternoon, with between one hundred and one hundred fifty individuals in attendance. The demonstration proved highly visual, featuring a number of creative performances by artists, and marched from the Legislative Yuan to other government buildings in the Shandao Temple area, such as the Executive Yuan and DPP headquarters. 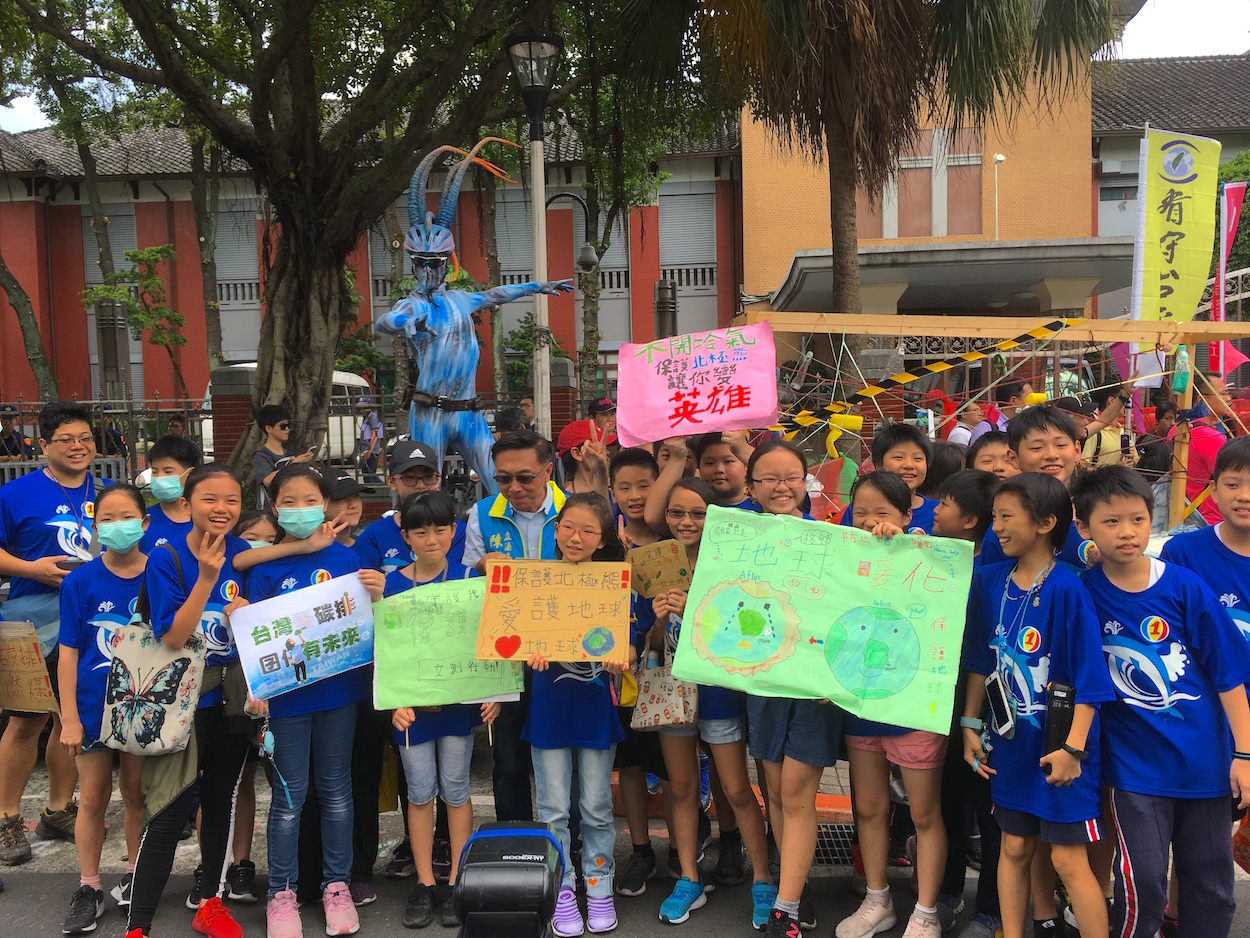 Notably, a large number of protest participants were children, as the event was framed as being part of the global “Fridays for Future” movement called for by high schooler climate activist Greta Thunberg. The “Fridays for Future” movement calls on students worldwide to strike from their classes and instead take part in demonstrations to call for environmental action, seeing as young people will be among those most affected by climate change in coming years and decades. Among the participants in the demonstration was a class of twenty to thirty elementary schoolers. Other speakers at the event were middle schoolers and high schoolers, including an attendee of the Taipei American School who spoke in English.

Mainstay organizations of the Taiwanese environmental movement were present at the demonstration, such as the Green Citizens’ Action Alliance, Citizens of the Earth, Taiwan, the Taiwan Environmental Information Association, Air Clean Taiwan, as well as other civil society organizations such as the Garden for Hope Foundation, International Socialist Forward, the Trees Party, Taiwan Alliance for Advancement of Youth Rights and Welfare. The National Federation of Teachers’ Unions was present, likely having played a part in mobilizing young students to the demonstration, as were indigenous organizations such as the Central Taiwan Ping-pu Indigenous Groups Youth Alliance, who performed traditional ceremonies to call upon ancestors for protection. 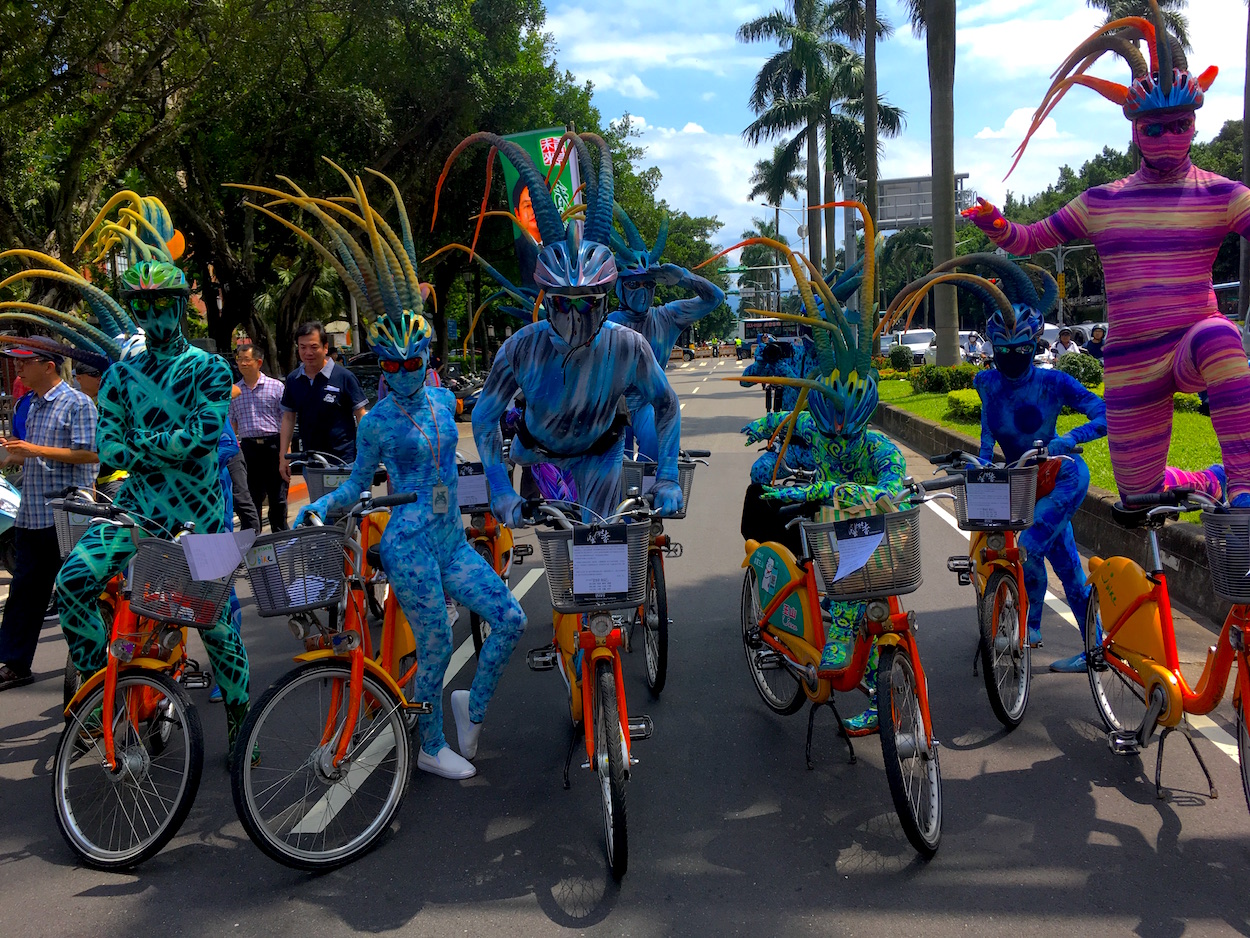 A number of artist organizations were also present, such as the Association of the Visual Arts in Taiwan. As such, the demonstration featured a number of performers dressed in spandex suits riding on YouBikes, billed as alien conservationists who had come to visit Taipei from the cosmos to promote environmental practices, as well as a group of foreign artists dressed as animals, including artists from Mexico and Belgium. Performance art also took place next to a wooden structure which was placed outside the Legislative Yuan and protesters pulled a wooden cart filled with recycled items during the protest march.

Representatives of both the DPP and KMT were present, with legislator Chen Man-li and former premier William Lai of the DPP and legislator Johnny Chiang and former New Taipei mayor Eric Chu of the KMT among those who made appearances at the demonstration. 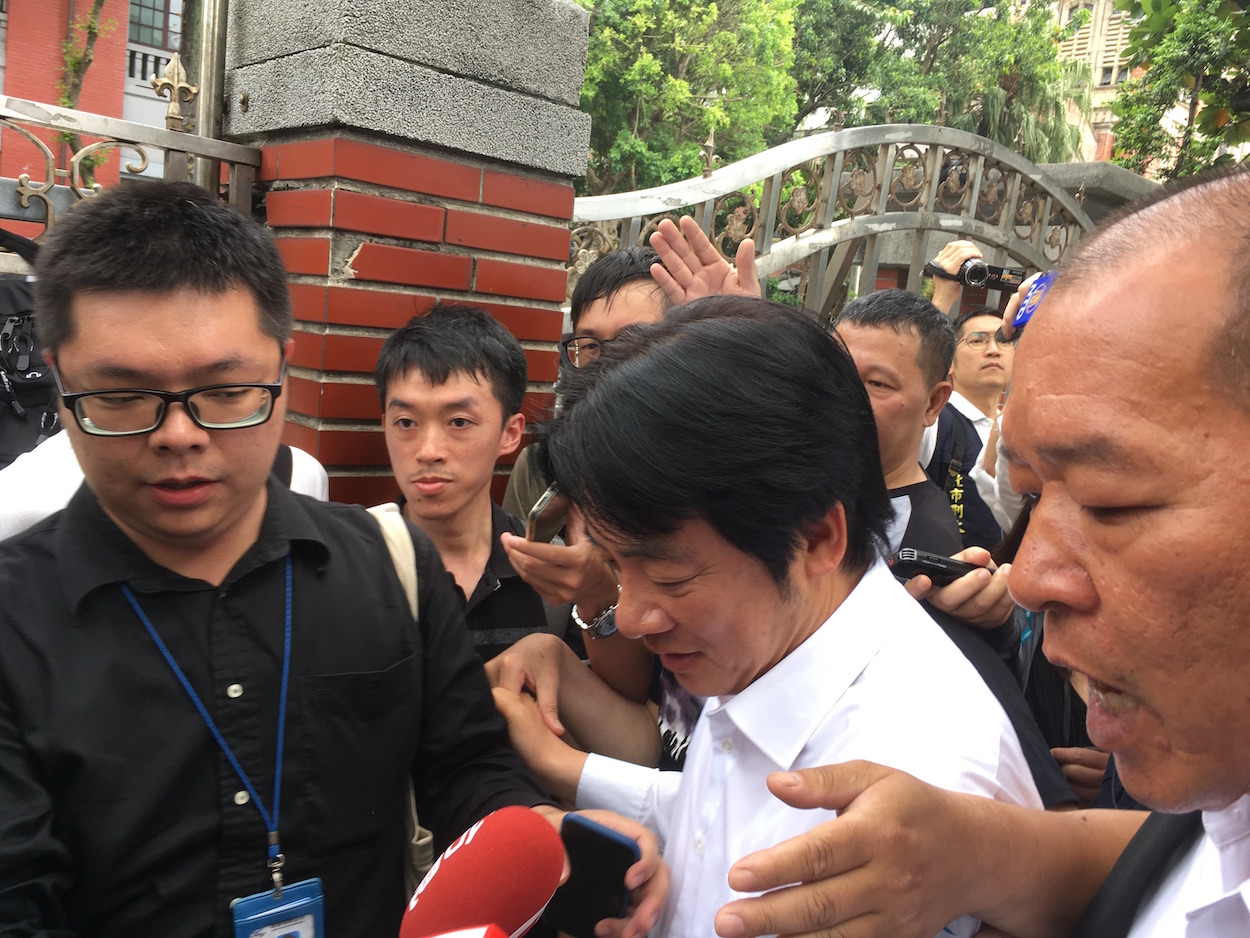 William Lai during his visit to the demonstration. Photo credit: Brian Hioe

Nevertheless, protest organizers briefly confronted Eric Chu regarding the disposal of nuclear waste in New Taipei and protesters held up an anti-nuclear banner behind Chu, leading Chu to back up and claim that the crowd’s demands were also his demands. Similarly, after William Lai arrived at the demonstration, the crowd saw clashes between Lai supporters and demonstrators criticizing Lai’s actions as mayor of Tainan regarding land evictions in the process of the construction of the Tainan MRT and regarding the passage of the Labor Standards Act during his time as the Tsai administration’s premier.

In particular, police attempted to confiscate a banner held by one of the organizers of the protest—a member of the Green Citizens’ Action Alliance—regarding evictions conducted by Lai during his tenure as mayor of Tainan, despite the fact that this organizer emphasized that he only intended to hold up the banner peacefully off to the side while Lai was present at the protest. Such police actions later led this organizer to criticize the police’s actions as not so different from actions during the martial law period. Indeed, given visits by high-profile politicians of both political camps to the demonstration, protest organizers sought to emphasize that they viewed the voices of young people as more important than the voices of politicians in their comments. 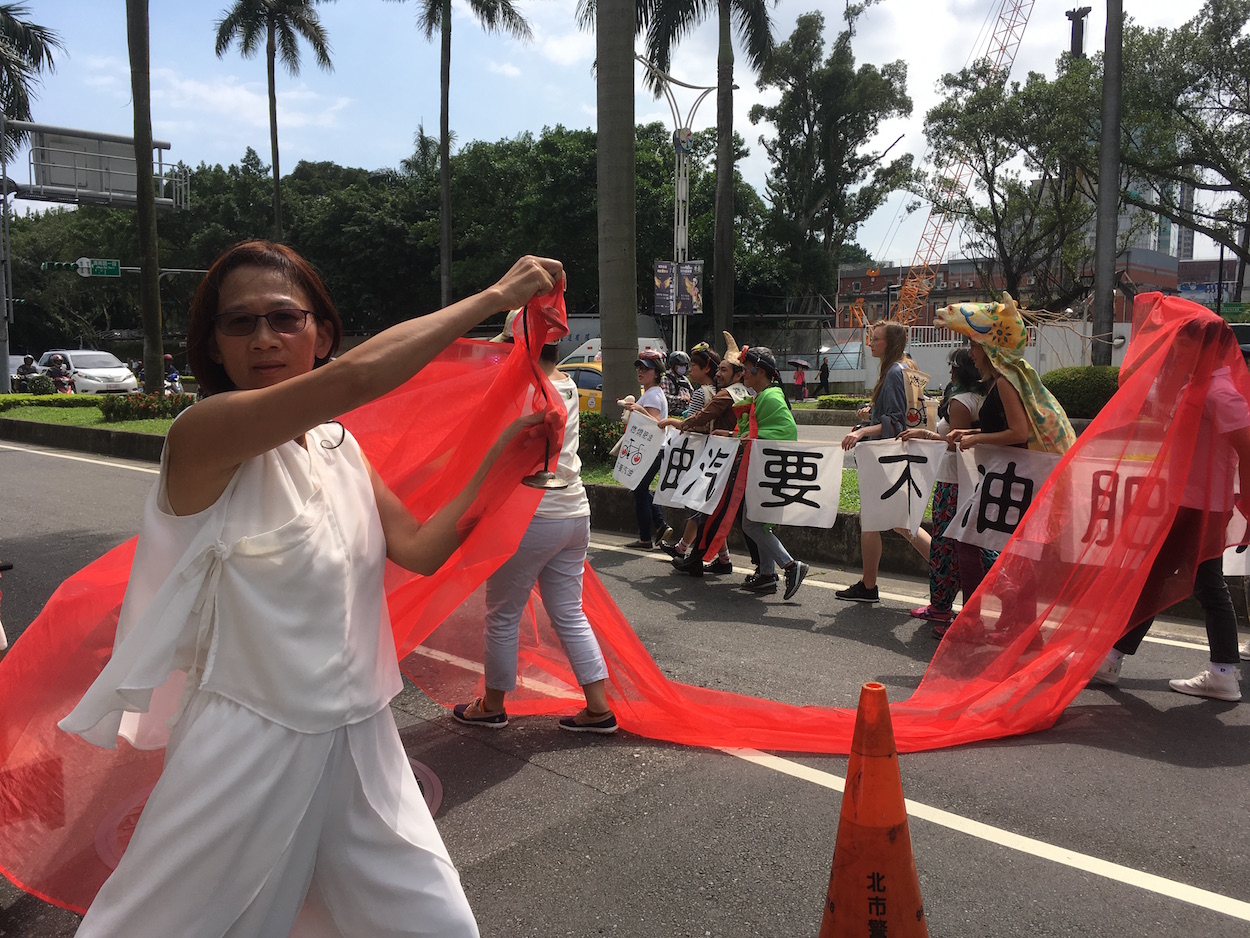 Performance art at the demonstration. Foreign artists dressed as animals are visible in the background. Photo credit: Brian Hioe

With the so-called alien conservationists leading the way on YouBikes, demonstrators proceeded east past the Legislative Yuan, past the Forestry Bureau, and north to DPP headquarters, where they handed a petition to DPP secretary-general Luo Wen-jia. Outside of DPP headquarters, Luo adopted a friendly tone with child protesters and was referred to in turn as “Grandpa Luo”. The protest later proceeded past the Executive Yuan before returning to where it started outside the Legislative Yuan.

In protest slogans, demonstrators called on members of the public to burn fat instead of oil, to plant and conserve more trees to address carbon emissions and to reuse and recycle. To this extent, demonstrators also emphasized that climate change has become a universal issue and, in that way, touches upon human rights issues, as well as that, as an island nation, Taiwan would likely be among the first countries affected by rising tides caused by climate change. Demonstrators drew attention to sudden shifts in Taiwan’s weather in past years, inclusive of bouts of heavy rain, as caused by climate change. 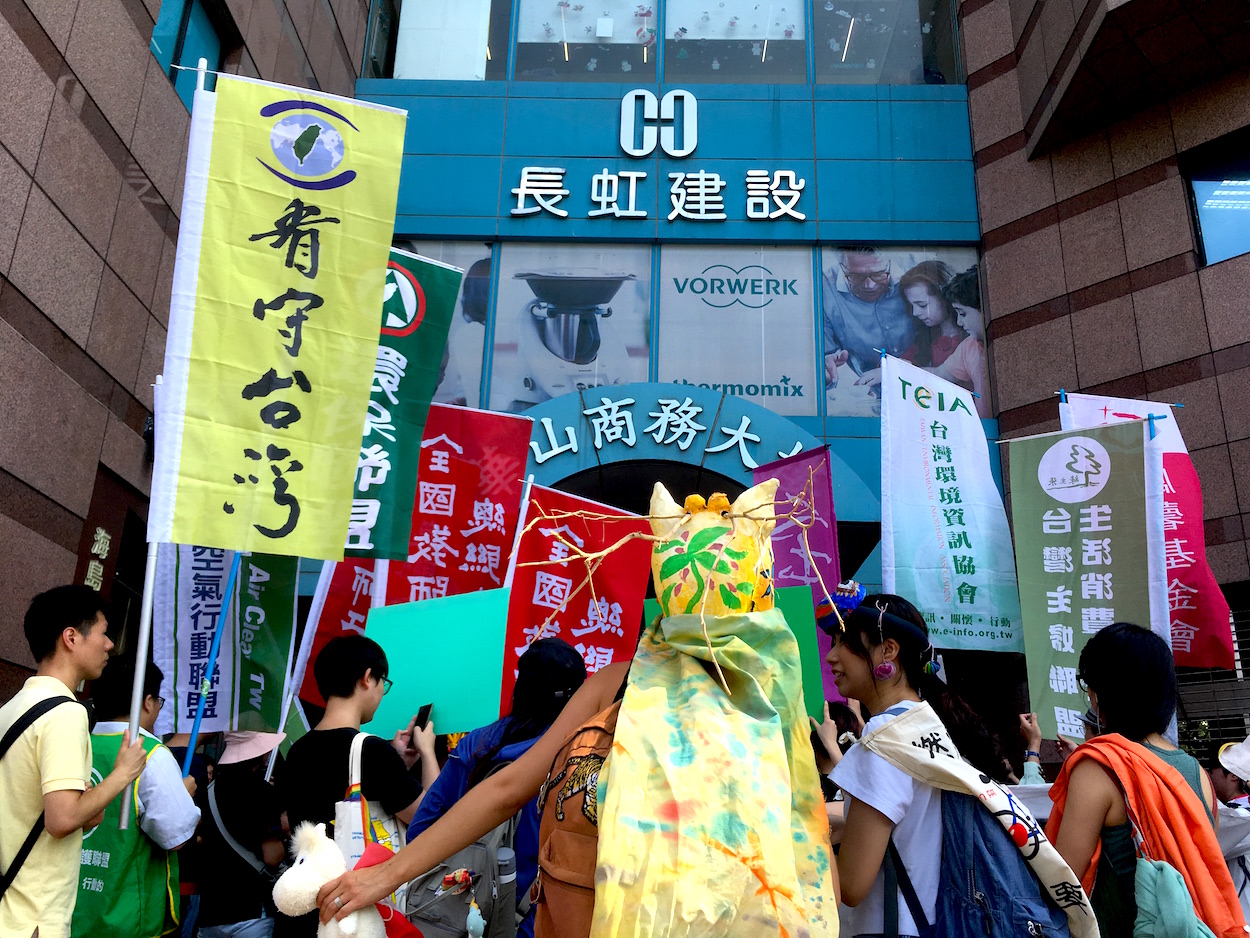 Consequently, though lacking in broad numbers, Taiwan’s first “Fridays for Future” protest proved a small but spirited demonstration. It still remains to be seen whether calls for environmental action by the government will see more than just talk, however, or as to whether such protests have the potential to expand.