SEVERAL THOUSAND demonstrated in Taichung against growing problems of air pollution in Taiwan today. According to varying estimates, between 5,000 to 9,000 were present  but despite the size of the protest, the demonstration was less reported on by media due to taking place outside of Taipei. The demonstration began at 1 PM and lasted until 6 PM today.

Apart from that this trend in reporting reflects disproportionate focus by media on Taiwan’s political, economic, and cultural center of Taipei, it is less common for large scale protests involving thousands of individuals to take place outside of Taipei. Namely, Taiwan’s small geographic size makes it possible to travel to Taipei to protest the central government for issues which do not take place in Taipei, and because of this disproportionate focus by media on Taipei, this makes it easier for issues to become more widely known if demonstrations about them take place in Taipei.

However, this was something that today’s demonstration aimed to address, with emphasis in the event upon the fact that it was a demonstration which took place in Taichung. Along such lines, attempts were made by organizers to reverse the usual trend of demonstrators from across Taiwan organizing shared buses to travel to Taipei to protest, with buses organized from Taipei to go to Taichung instead. 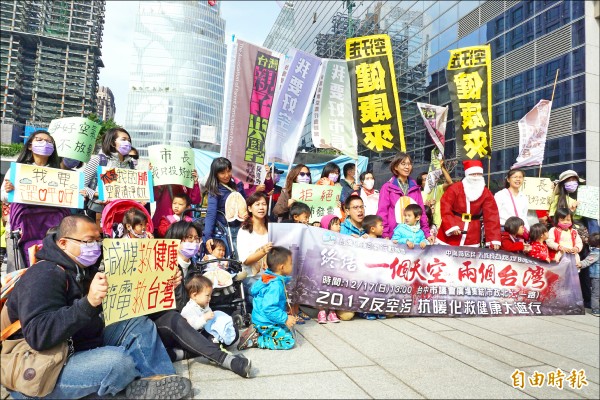 This focus on Taichung is also reflected in that the demands for the demonstration were not only environmental in nature. Apart from demands that the Taichung Power Plant reduces its output of bituminous coal by 20% and subsequently decreased this output by 10% every year, that Taiwan’s top 30 stationary pollution sources reduce their pollution by 20% by the end of this year, and that the government takes step to provide tracking of daily and hourly air pollution in realtime for citizens, demands were also made to relocate key government agencies to distribute power more evenly across Taiwan.

In particular, such demands included demands to relocate the Executive Yuan, Ministry of Economic Affairs, and Environmental Protection Agency to southern Taiwan, a proposal that has sometimes been raised in the past. Although this is unlikely to happen without greater momentum building behind such calls, sometimes this has been called for in the past as a means of redistributing government resources more evenly across Taiwan, with calls to move such the Executive Yuan or other key government institutions to Taichung or Tainan by the respective mayors of those cities. 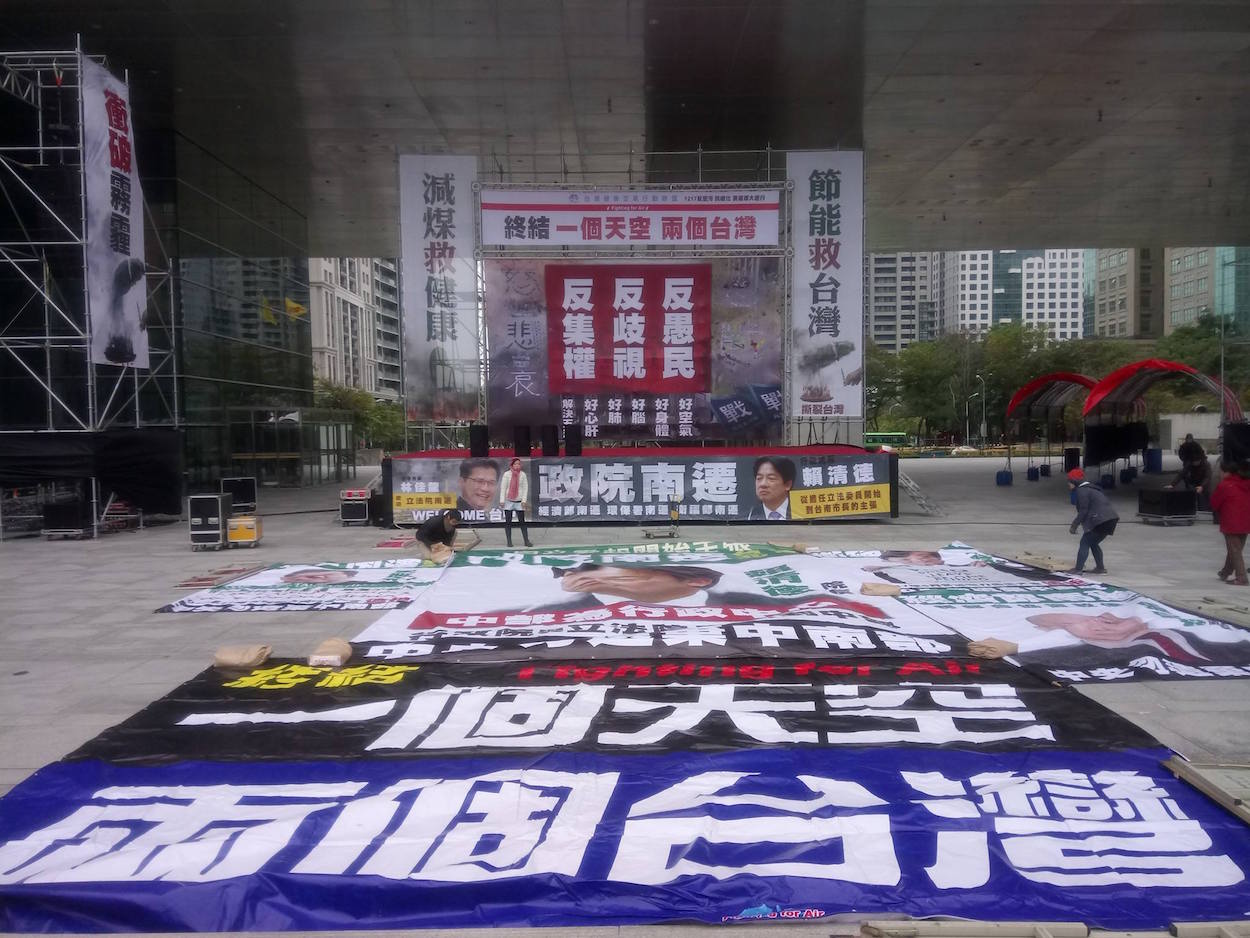 Nevertheless, organizers still likely hoped for a higher turnout, which would at least unambiguously break 10,000. Again, because of the lack of precedent for large-scale protest taking place outside Taipei, or reversing the usual trend of individuals travelling from all over Taiwan to Taipei to protest, it is still an uphill challenge holding large-scale demonstrations about an issue outside of Taipei. This is an ironic challenge with regards to Taichung, seeing as Taichung is Taiwan’s second largest city, and as located between the large metropolises of Taipei in the north and Kaohsiung in the south, it should actually be geographically easier for individuals spread across Taiwan to travel to Taichung than to Taipei in northern Taiwan for a protest.

Organizers of the demonstration included Air Clean Taiwan, the Taiwan Treehugger Association, the Homemakers United Foundation, and Clear Air Taichung. Notably, although the pan-Green leaning or politically Left environmental organizations which have primarily been the organizers of many large-scale protests in recent years and were key players in the Sunflower Movement were also in attendance, along with post-Sunflower Third Force parties and the like, they did not seem to serve as the main faces for the demonstration.

In particular, the focus within the demonstration was upon environmental issues in Taiwan as being an issue beyond divisions of pan-Blue and pan-Green. As such, a slogan for demonstrations was, apart from a general call for “No Coal”, with calls for “No discrimination,” “No centralized power”, and “No deception of the masses” as general slogans for the protest. It is certainly true that key environmental demonstrations in past years have been largely organized by pan-Green leaning or politically Left environmental organizations in recent years, likely due to stronger local consciousness on the part of such groups, and stronger ties between the KMT and entrenched business and industrial interests in Taiwan owing to its decades of clientelist rule through the former one party-state that it once controlled. 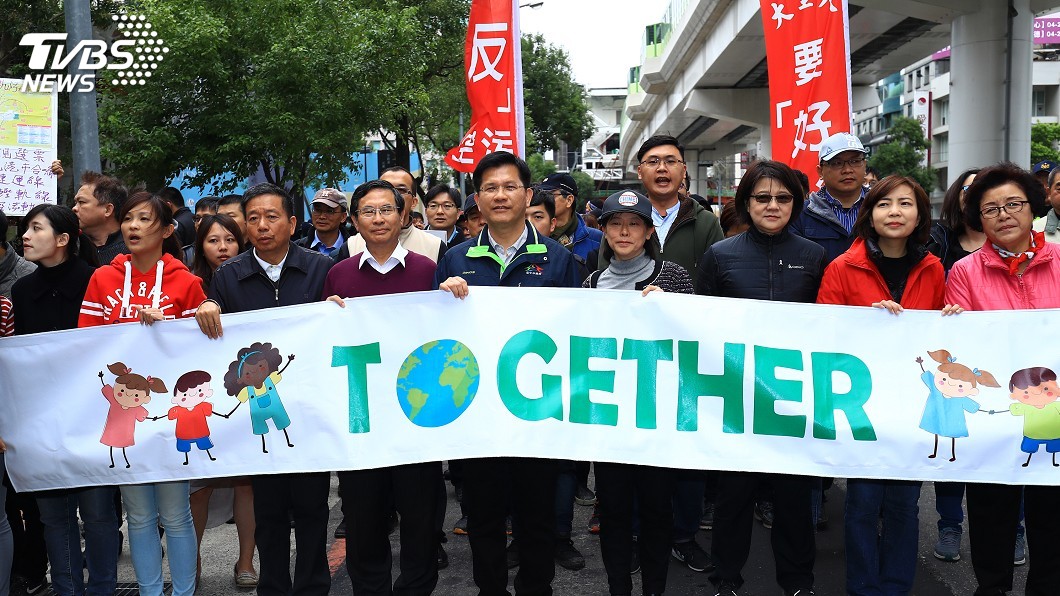 But the bipartisan focus in the present demonstration was likely the result of the KMT attempting to jump onto supporting the march in order to hammer the DPP, then DPP Taichung mayor Lin Chia-Lung also endorsing the march as a way to defend his environmental credentials at a time in which the DPP finds itself increasingly fraught on environmental policy. Namely, despite supporting environmental demonstrations in the past against the KMT, the DPP has largely not broken with entrenched interests in the power industry and other industries which contribute to air pollution in Taiwan, such as those within state-owned power company Taipower, which has opened the way for the KMT to jump onboard with such issues. This is true not only of environmental issues, but also other issues, such as present contention over the DPP’s planned changes to the Labor Standards Act.

Either way, it is in fact that true environmental issues should not be an issue which is pan-Blue or pan-Green in nature. And, likewise, while the KMT may be opportunistically jumping onboard with environmental issues when it was guilty of environmental crimes in the past, the DPP proves no better than the past KMT if it, too, does not break with entrenched interests once in power.

Yet how it remains to organize in such a manner as to put pressure on the DPP government and to force it to take action regarding environmental pollution not only affecting Taipei, but all of Taiwan, remains to be seen. Future protests larger in number will likely be needed and, in order to raise awareness of issues outside of simply Taipei, it is to be hoped that today’s demonstration sets a precedent for future large-scale protests which take place in urban areas outside of Taipei.