WITH THE RULING of the Council of Grand Justices, Taiwan’s highest court, that not allowing same-sex couples to marry is unconstitutional, marriage equality has taken a dramatic step forward in Taiwan. As a result, international news outlets have dubbed Taiwan the first country in Asia to make a landmark ruling in favor of gay marriage, clearing the way for legalizing gay marriage in China. But this is not victory just yet, seeing as this means the Legislative Yuan will need to decide on the means by which Taiwan’s Civil Code is to be changed. And it remains to be seen how long it will take to do so, although this must take place within the next two years. 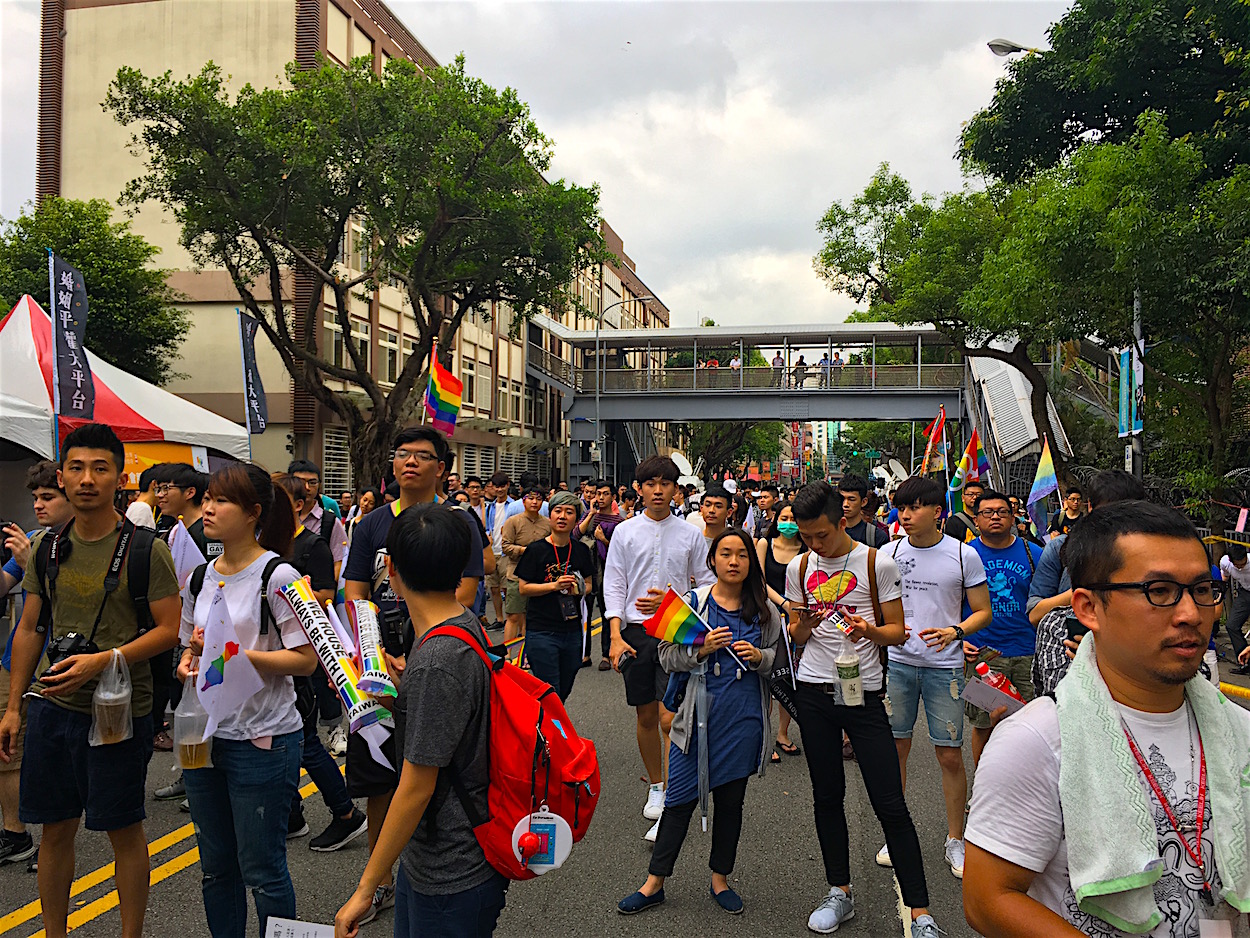 What will again be of concern, however, is whether the Legislative Yuan will attempt to legalize same-sex marriage through adding new laws to the Civil Code or amending existing laws in Taiwan’s Civil Code. Adding new laws to Taiwan’s Civil Code is seen by many LGBTQ activists as not substantially different from “separate but not equal” civil partnerships, rather than full marriage equality. It is feared by some that new laws added to the Civil Codes may not grant same-sex couples the full rights that heterosexual couples enjoy, such as the right to adoption, to make medical decisions for their partners, or inheritance of property. 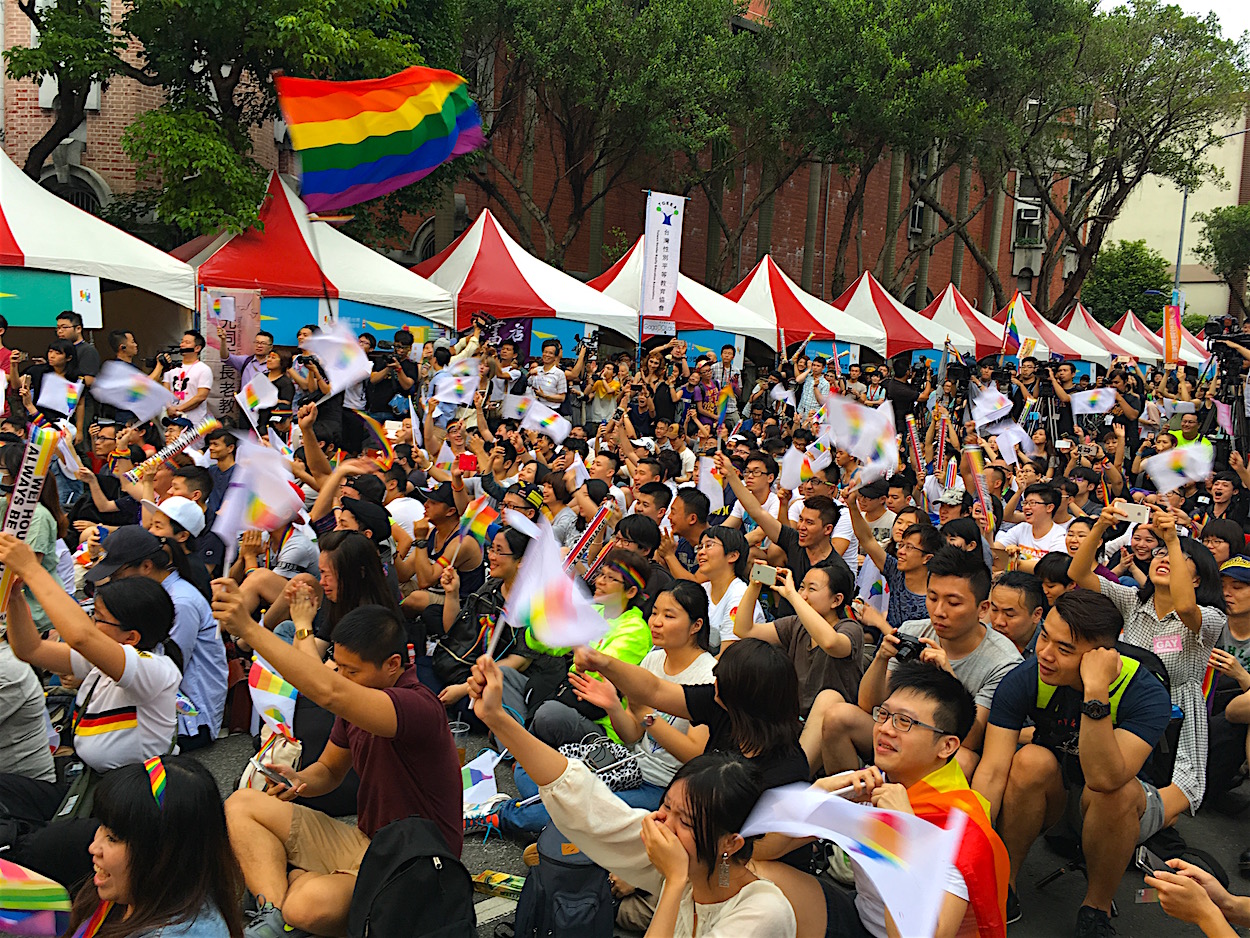 Celebrations breaking out as the court ruling is made. Photo credit: Brian Hioe

Namely, while Tsai Ing-Wen of the DPP rode into the presidency promising to legalize marriage equality with the view that marriage equality was widely supported by Taiwanese society and that this would not be very hard, surprisingly large showings by anti-gay Christian groups provided the justification for DPP legislators to backslide on the issue and in some cases to reverse course entirely. The Presbyterian Church, which is divided on the issue of gay marriage in Taiwan and internationally, has a strong presence within the DPP and very likely Tsai did not have the full agreement of the party before she made marriage equality into part of her campaign platform. Tsai eventually washed her hands of the issue altogether, probably with the view that gay marriage was no longer a safe political issue for her to endorse, although this obviously leaves Tsai open to the accusation that she was only seeking to use members of the LGBTQ community and their allies for political gain in a hypocritical manner. 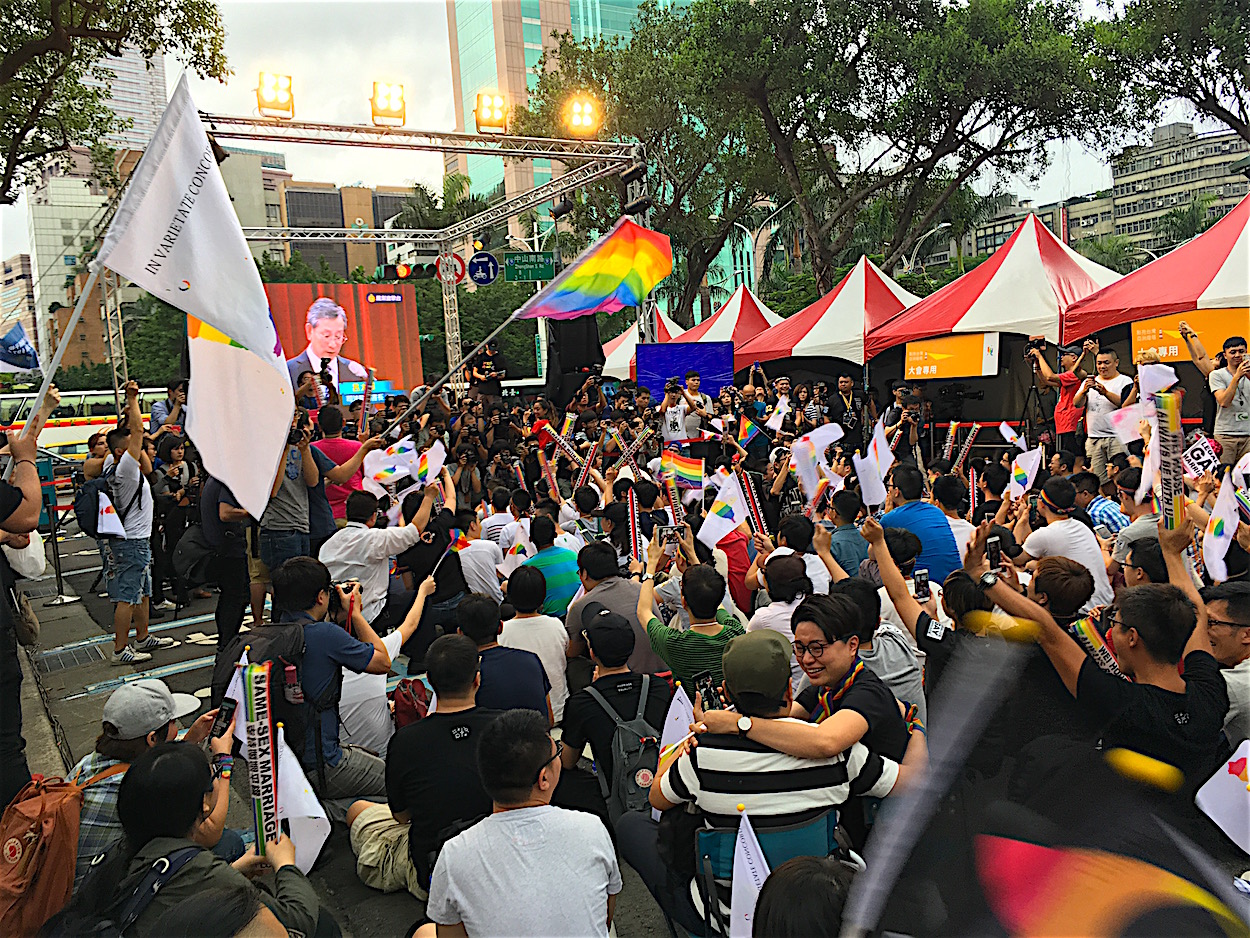 Taiwan society will need to forced to remember that gay couples being denied the full rights of their heterosexual counterparts is something which has led to deaths in Taiwan, as observed in the suicide of French professor Jacques Picoux in October last year. Moreover, if the DPP stalls too long on the issue, it remains possible that another country in Asia could steal a march on Taiwan and abruptly legalize marriage equality before Taiwan does. Two years could prove far too long a period of time in which legislature has to make chances, dragging on the fight to legalize marriage equality long, and allowing for further backsliding. 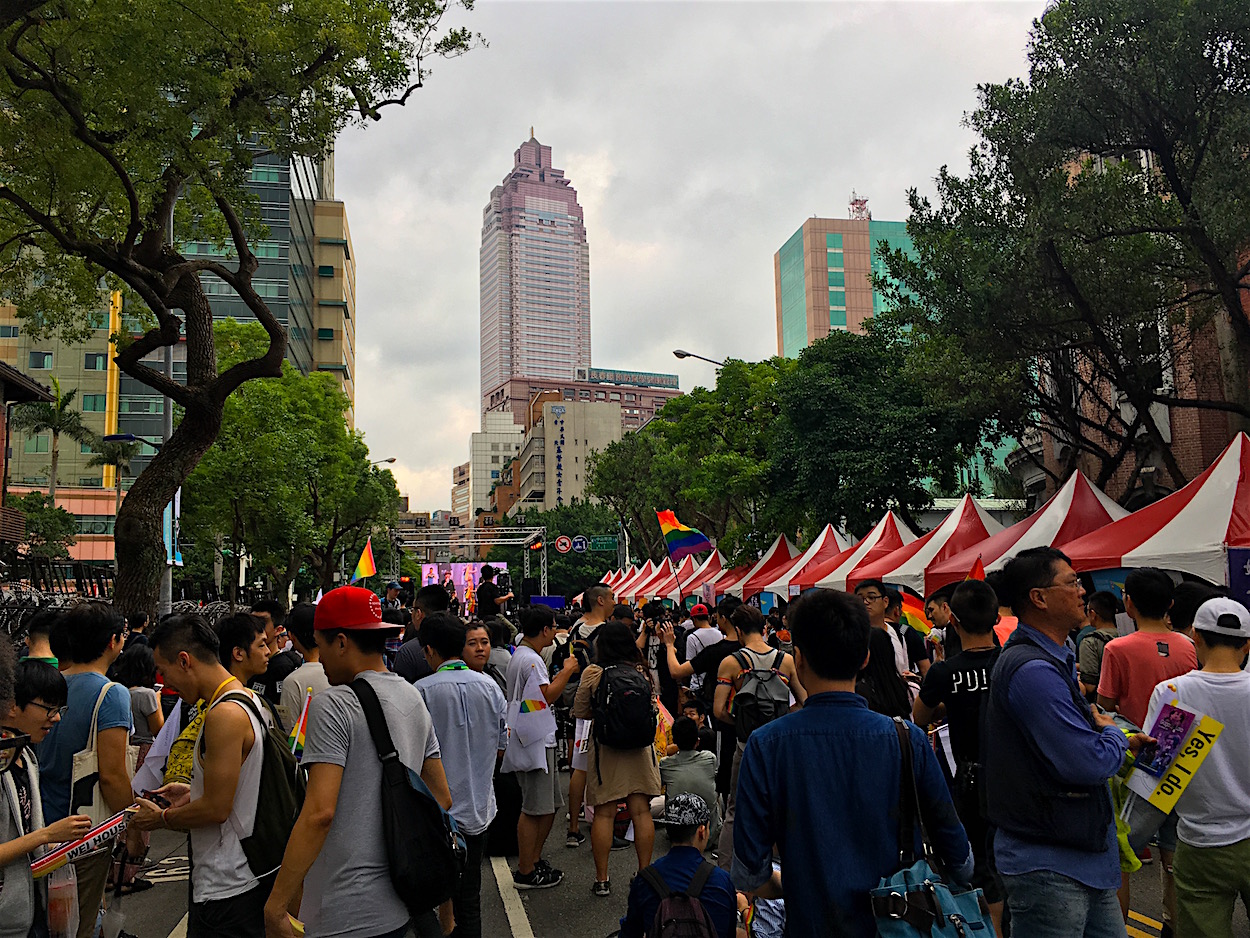 A rally in support of marriage equality took place today in front of the Legislative Yuan, as hundreds gathered to await the Council of Grand Justices’ decision. A rally organized by the Social Democratic Party also took place earlier this morning in front of the Taipei City Council, in protest of proposed regulations that all textbooks concerning sexual education must be reviewed by the parent’s committee of every school before students are allowed to use them as classroom materials.

This earlier rally serves as a reminder that marriage equality is not the only issue at stake, but so, too, is the fact that education about sexuality in Taiwan remains woefully inadequate and continue to teach social attitudes which treat LGBTQ individuals as pathological or deviant. In particular, the Joint Committee of Primary School Parents in Taipei has been strongly opposed to any form of sexual education in schools. Moreover, many of the anti-marriage equality groups active in the past year began as groups opposing sexual education in schools before the possibility of marriage equality led them to switch focus. 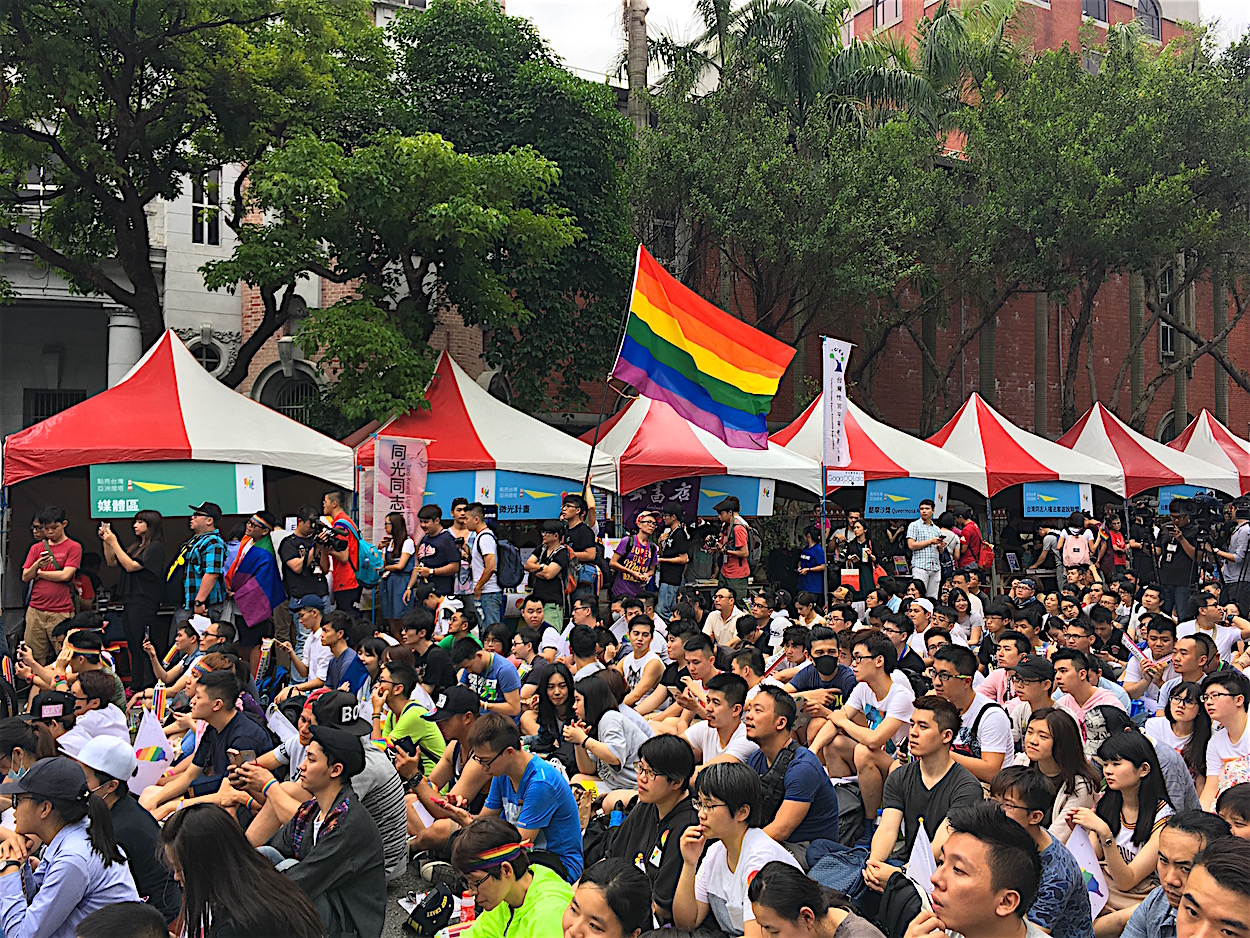 Although a sudden downpour of rain broke out earlier, prompting the quip from Jennifer Lu of the Taiwan Tongzhi Hotline Association that without rain there cannot be rainbows, the rally outside the Legislative Yuan will continue into the night. Despite the apparent victory of the Council of Grand Justices’ ruling, of course, the fight is not over yet, and the battlefield next moves to the legislature. The rally will go on into the night, to allow those who are currently working to also attend, with plans for demonstrators to all hold up their cell phones to “Light up Taiwan”, the election slogan of the Tsai campaign last year, as a way to hold the DPP to its promises. 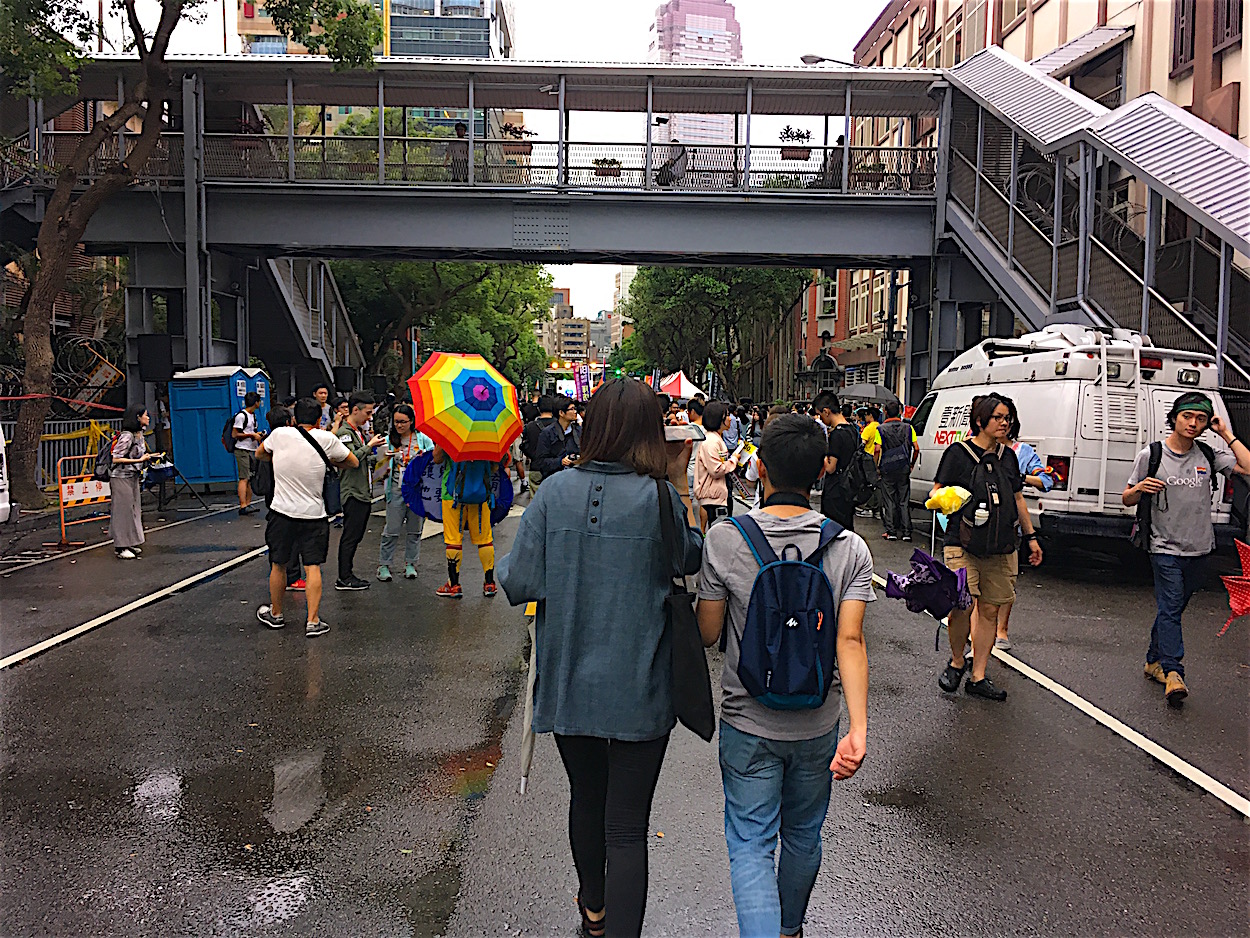 What took place today was historic step forward for marriage equality in Taiwan, but there is still some ways to go before marriage equality is legalized in Taiwan. What comes next may be, in fact, be harder than what came before. Furthermore, as seen in the issue regarding sexual education in Taiwan’s schools, marriage equality is not the only issue facing the LGBTQ community. Marriage equality would not be the finish line either, as many issues still need to be fought for. And so while today may be cause for celebration, the fight is not over yet.