185 DOMESTIC CASES were reported by the Central Epidemic Command Center (CECC) at its press conference today, with no imported cases. Fifteen deaths were also reported. This is the second consecutive day in which the number of cases fell below 200, though it remains to be seen whether this is due to lower testing or represents downward trends.

This consisted of 98 cases in New Taipei, 42 cases in Taipei, fourteen cases in Keelung, and ten cases in Taoyuan. Miaoli again did not see any uptick in cases with seven cases, despite second and third-round testing among migrant workers linked to several clusters among factory workers. Likewise, there were four cases in Hualien, three cases each in Hsinchu and Changhua, two cases in Yilan, and one case each in Yunlin and Taichung. 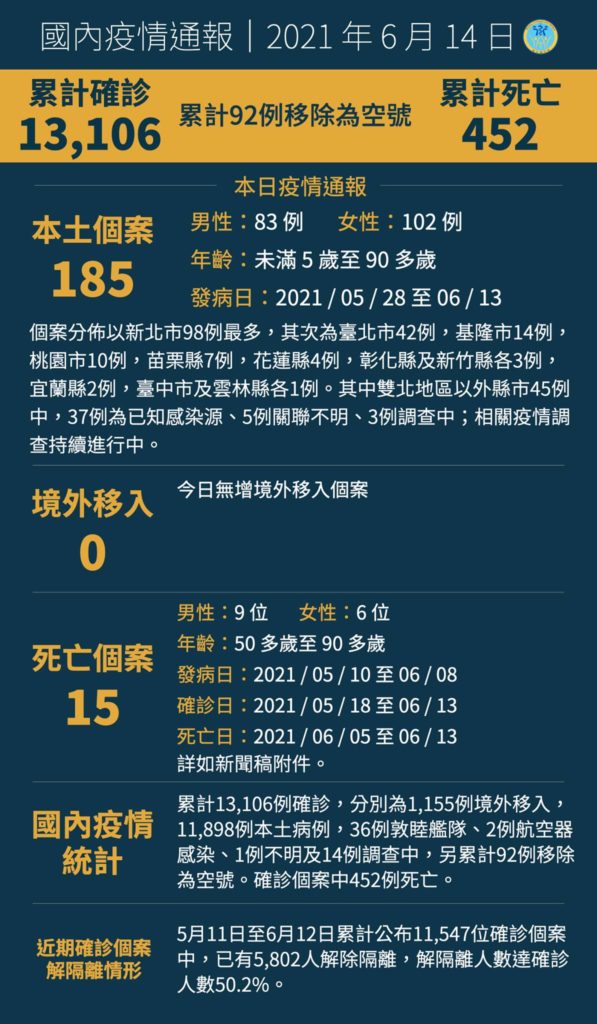 The CECC thanked the Ministry of Science and Technology and Ministry of Economic Affairs (MOEA) for their aid in setting up testing in science parks today. The CECC is working on ways to speed up PCR testing or to integrate rapid testing and PCR testing. As home tests will eventually become available for purchase from pharmacies, the CECC is also looking into how to set up standard procedures for reporting test results, as well as what the next steps should be when someone tests positive. CECC has updated guidelines for recovering individuals who have low transmissibility but who are not fully negative for COVID-19 yet. The CECC does not believe that Ivermectin is useful for treating COVID-19, according to current research.

According to Minister of Health and Welfare Chen Shih-chung, the past two days suggest a decline, though Chen also called on the public not to slacken measures aimed at preventing the spread of COVID-19. Medical capacity has stabilized, with more individuals released from quarantine.

There was the highest number of severe cases on June 7th, with 435 cases across Taiwan and 294 cases in the greater Taipei area. This has now declined to 389 cases across Taiwan, which is 298 cases in the greater Taipei area. 16% of cases were sent from northern Taiwan to central or southern Taiwan, to alleviate burden in terms of medical resources.

For airline workers who are fully vaccinated, seven days of self-health management is required, with a negative PCR test required at the end of this period. Antibody testing will take place every three months. 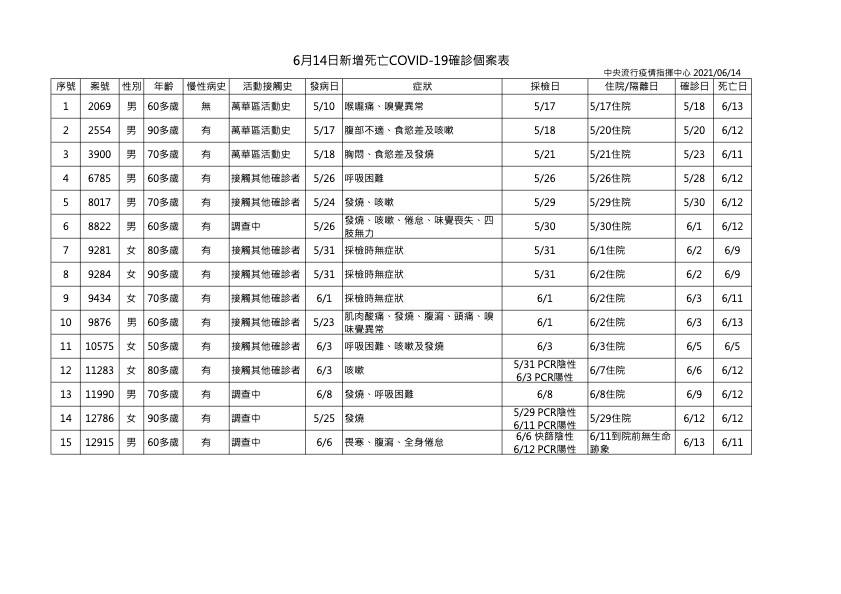 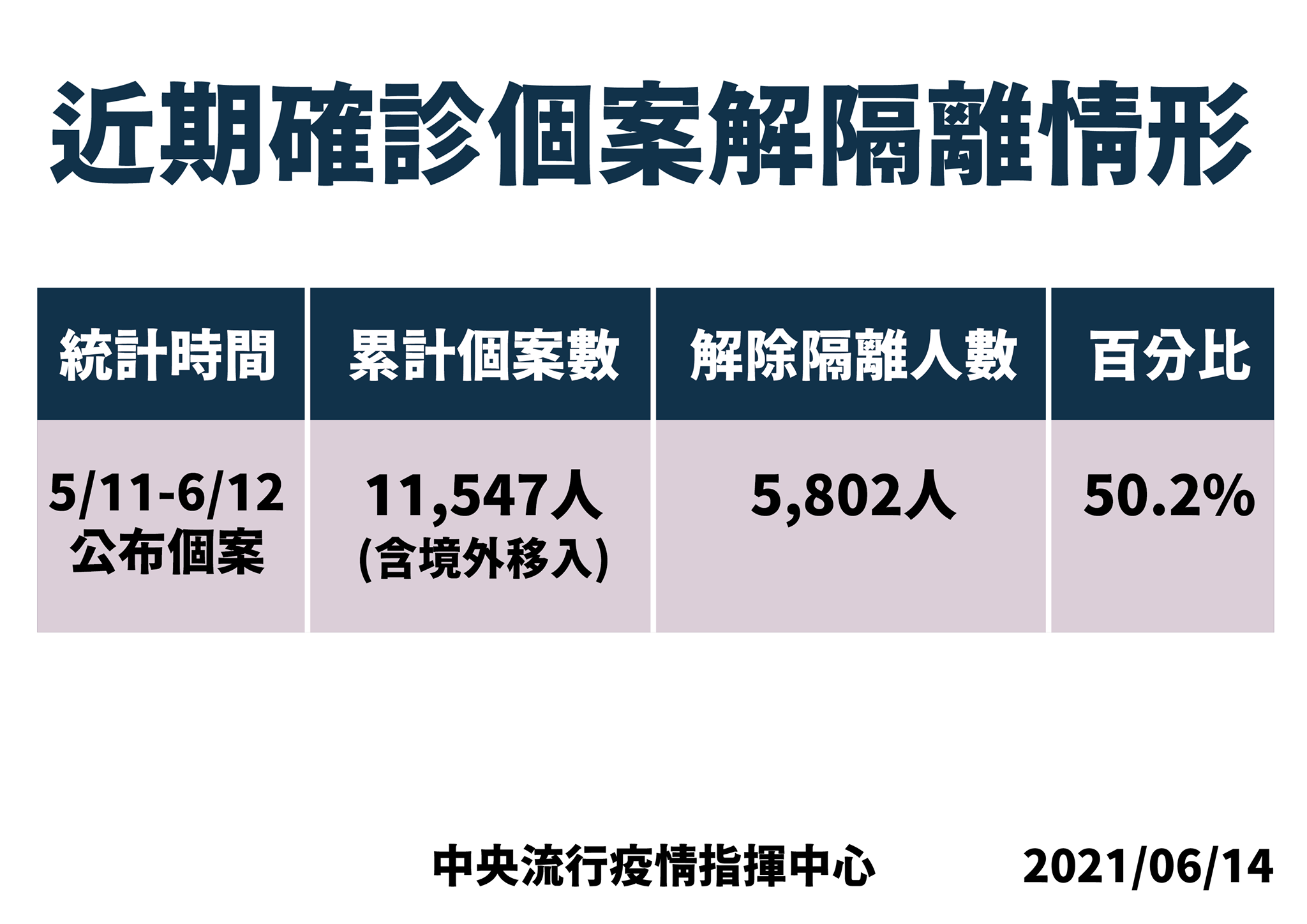 Information on the deaths announced today (left) and on the individuals released from quarantine (right). Photo credit: Ministry of Health and Welfare

It is not impossible that the CECC will be attacked over the new regulations, seeing as the current outbreak is thought to have taken place as a result of the relaxing of quarantine measures for airport workers. The resemblance of some of these measures to the “3+11” quarantine regime that led to the outbreak is likely to be criticized.

Conflicts between the DPP and local pan-Blue governments continue. New Taipei mayor Hou You-yi has come into conflict with DPP city councilors after Hou called on local politicians not to attack or slander efforts by his government to fight COVID-19 and instead demonstrate unity. Pan-green city councilors have taken this as Hou calling on them not to carry out oversight over his government during the outbreak.

Taipei deputy mayor Huang Shan-shan stated earlier today that she is not picking up phone calls from Chen Shih-chung. Huang claims this is a waste of time and that she would rather focus on COVID-19 prevention efforts than waste time speaking to Chen. In particular, the Taipei city government is attacking the central government, claiming that transparency for distributing vaccines is lacking, that the city government is only notified at the last minute about vaccine allocation, and that there is favoritism in terms of the vaccines that are distributed between city governments.

But Chen stated today that he had spoken with Huang before the CECC press conference and that such issues had been resolved, while Huang also downplayed the conflict during the Taipei’s city daily press conference regarding the current COVID-19 outlook. Chen stressed past cooperation between the central government and local governments in the past, such as in training medical personnel or with regards to quarantine facilities. Pan-Green mayors such as Keelung mayor Lin Yu-chang have also mentioned delays finding out about vaccine allocation, however.

Taipei mayor Ko Wen-je stated that he believed that the current death rate was reflective of the state of COVID-19 spread from one to two weeks ago. New processes have been set up for hotspots versus areas where COVID-19 is relatively more under control. Ko stated that he believes if all of Wanhua was tested for COVID-19, it would be around 2%, but if this was testing among contacts of positive cases, this would be 5.4% to 23%. Taipei is currently focused on detecting previously undetected transmission chains of COVID-19 in hotspot areas. Ko otherwise lashed out at that different cities in Taipei currently allow different age groups to be vaccinated, based on supply, and declined to answer when asked about whether he would be willing to take domestic vaccines.

Vaccine distribution to Kinmen from the 1.24 million vaccines donated by Japan has been questioned after photos showed medical staff unloading vaccines outdoors in the open sun. Namely, vaccines need to be refrigerated at low temperatures in order to maintain effectiveness.

A doctor at the Taipei City Hospital Zhongxing Branch has reported delays distributing vaccines to hospitals from the Taipei Department of Health. According to the doctor, he waited over ten hours before a scheduled delivery of COVID-19 vaccines took place.

At present, there is still too limited a supply of vaccines to vaccinate the family members of medical personnel, though categories for vaccination will be opened up with more supply. There should not be issues vaccinating pregnant medical workers with the Moderna vaccine that has started to be used.

With restrictions on highway travel leading to traffic over the Dragon Boat Holiday, this has led to some backlash against the CECC. On-traffic from ramps was slowed down, with red lights increased in length and green lights decreased in length. Traffic today was down 74% from the first time last year. 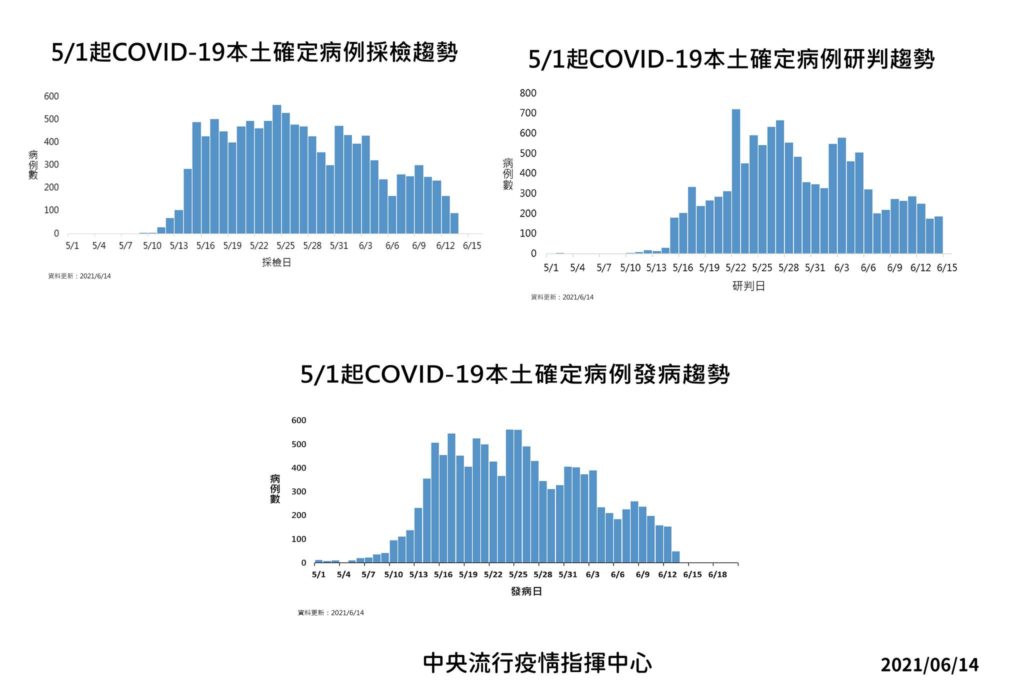 Further data released by the CECC. Photo credit: Ministry of Health and Welfare

Entertainer Jie Yong-jie has raised 60 million NT to purchase 330 high-flow nasal cannulas through a call for donations. Enough to purchase 252 machines was raised in two days. 200 oxygen machines purchased by the government have been sent to hospitals. The CECC thanked members of the public willing to donate supplies or raise money to purchase medical equipment in its press conference, but the CECC stated that it still requires oversight over large-scale purchases.

The Zhongzheng Market in Xizhi has been closed, to prevent the spread of COVID-19, as some markets in Taipei and New Taipei have not maintained proper social distancing measures over the long weekend.

A company in Taoyuan, the ASE Group, has come under scrutiny after a report in The Guardian stated that it had ordered migrant workers living in apartments to vacate their apartments and move into company dormitories, following which their freedom of movement would be restricted. Migrant workers have been subject to restrictions on freedoms of movement that other residents of Taiwan have not been during the pandemic. Although the Taoyuan city government stated that the ASE Group’s actions were illegal and that it would order the Taoyuan city Department of Labor to investigate, the MOEA has defended ASE’s actions as legal.