TYPHOON HATO battered the city of Macau late last month, leaving a dozen residents dead and millions of dollars in damage. The typhoon also exposed the extent to which the Macau Special Administrative District is reliant upon the central government for its survival, as the Chinese government moved quickly into the city following the natural disaster.

Hato constitutes one of the most devastating natural disasters in the city’s history, but the government’s handling of the crisis has fallen under criticism as being inadequate in its urgency. While neighboring Hong Kong issued a landfall warning at around 6am the morning of the disaster, the Macanese government waited until 9am to issue a similar warning to its own residents. Many Macanese complained that they had already left their homes to go to work by the time the government issued the warning, making it impossible to return during the storm. 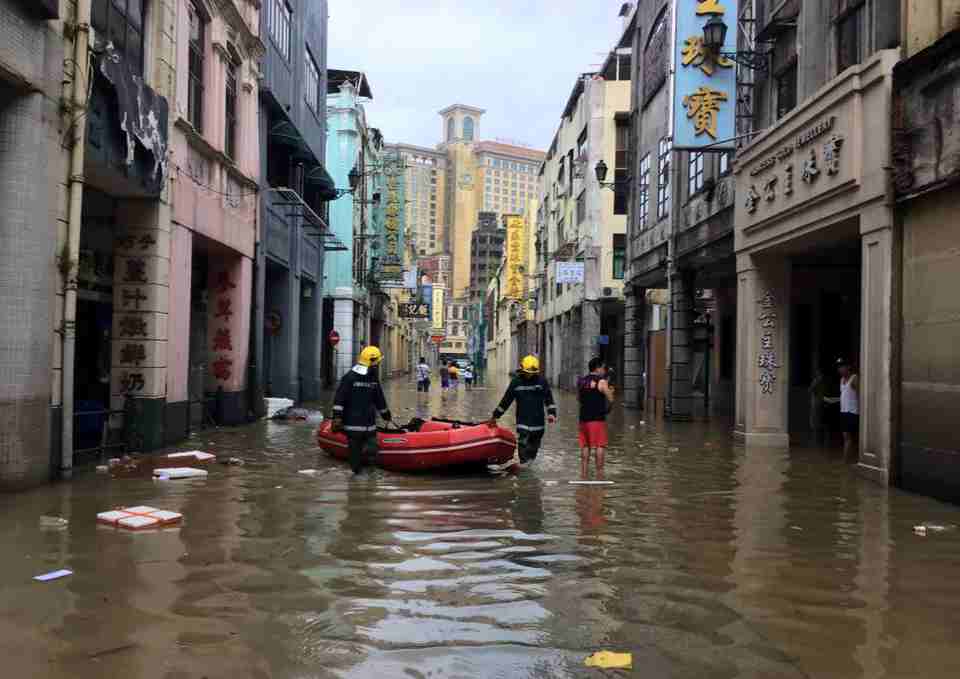 One of the most immediate signs of Beijing assuming greater administrative control of the SAR following the storm was the presence of People’s Liberation Army troops in the city in the typhoon’s wake. Chinese troops have been stationed in Macau since the handover to the Chinese central government in 1999. This latest deployment, in which over 1000 Chinese troops assisted in cleanup and rescue efforts, is the first time that PLA troops have been deployed in the streets of Macau since the handover took place.

Though the men and women of the PLA were in Macau in order to assist with the rebuilding of the city post-typhoon, the deployment was not met without apprehension, particularly by observers in Hong Kong. Yonden Lhatoo penned an op-ed in the South China Morning Post calling Macau “just another Chinese city” and emphasizing that such deployment is unnecessary in Hong Kong. Indeed, though Chinese troops are garrisoned in Hong Kong, they have not seen deployment of this scale, argues Lhatoo, nor would such action be acceptable to Hong Kongers.

Hong Kong and Macau have had a tense relationship politically, with Hong Kong being repeatedly blocked from interfering in Macanese affairs. Hong Kong has recently seen political turmoil around the issue of independence and self-determination from Beijing, such as the controversial pro-independence banners that went up at the Chinese University of Hong Kong only to be subsequently taken down under claims that such action violates the law.

Hong Kong democrats and pro-independence politicians have recently seen themselves banned from entering Macau under the auspices of preventing destabilization in Macanese political affairs. Pro-democracy Hong Kong council member Andy Yu of the Civic Party was denied entry into Macau following the storm on suspicion that he would engage in activities that would “jeopardize the public security or public order of the Macau SAR.” The Macau legislature is holding elections in the near future.

Yu is only the latest in a string of Hong Kong legislatures who have been barred from entering Macau. Democratic Party politician Helena Wong said she would be filing a complaint to Macau Chief Executive Fernando Chui following her own barring from the SAR earlier this year, and other lawmakers from Hong Kong have been temporarily detained along with their family trying to enter Macau.

Reporters from Hong Kong hoping to cover the cleanup and disaster relief efforts in Macau following the damage left by Hato were also turned away at the border last week. Four reporters from South China Morning Post, HK01, and Apple Daily who arrived in the city to report on the typhoon were turned away by immigration officials citing that the reporter posed a threat to the city’s internal security and stability.

Historically, Macau has always played the role of a secondary sister city to Hong Kong in the area of public perception. Macau has a smaller population and, despite the significant revenue it generates from its large gambling industry, is not seen as an international financial center in the same manner as Hong Kong.

Concerns have been growing since the inauguration of Chinese president Xi Jinping that the central Chinese government would be beginning to back away from its promise to Hong Kong of a “one country, two systems” period lasting no less than fifty years, as well as a pathway towards the people of Hong Kong being able to democratically elect their own chief executive. Since Xi’s inauguration, press and assembly freedoms have been tightened, and many fear that newly-inaugurated chief executive Carrie Lam will mint policies bringing the city further into China’s sphere of influence.

The apprehension surrounding the political and social developments in Macau following the devastation and human tragedy left in the wake of Typhoon Hato could serve as a catalyst to further debate on the political future of Hong Kong. If Beijing is planning on cementing further administrative control in Macau in the near future, it could serve as a testing ground for future plans to implement similar changes in Hong Kong.