TEN DOMESTIC CASES and one imported case were announced at the Central Epidemic Command Center (CECC) daily press conference today. Five of these cases were already in quarantine while no new deaths were announced.

The COVID-19 alert is to be relaxed to level two starting tomorrow, but vigilance against COVID-19 and measures including QR code contact tracing, hand disinfection, and mask wearing. Borders are still closed and flight transfers are still suspended. Rolling adjustments may be made to measures when needed. Considerations will be made for emergencies for non-citizens needing to enter Taiwan, which will be raised by the relevant agencies when needed. 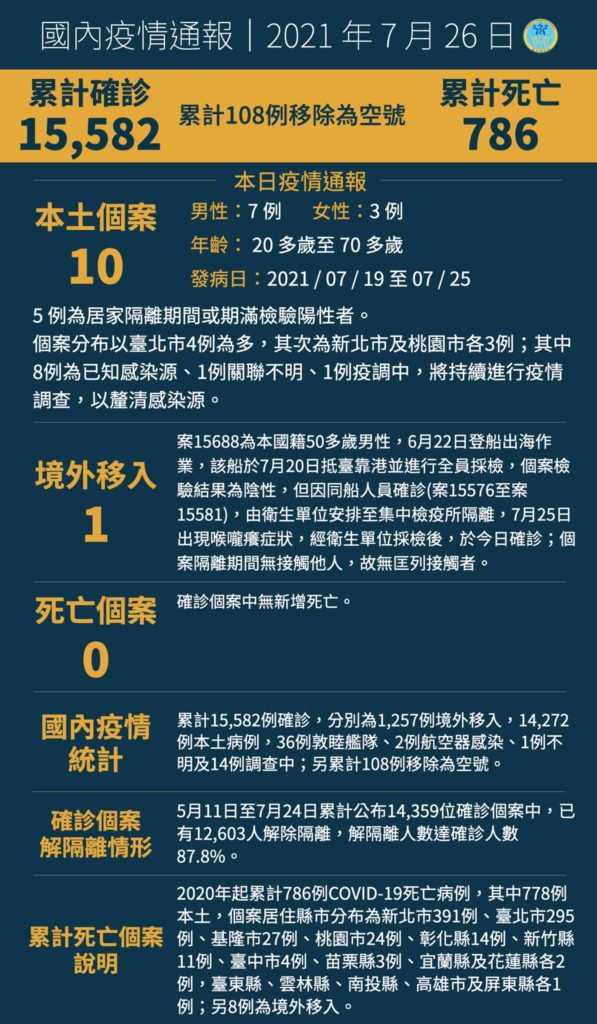 Taipei and New Taipei will not be opening up indoor dining during at least the first week of the level two area, while there is expected to be some restaurants that reopen indoor dining in Keelung and Taoyuan and some that do not.

If neighborhoods have specifically COVID-19 prevention plans that they believe can be implemented during level two, they can bring this up with the government and the feasibility of these plans.

The CECC stated that it is not against meetings by non-family members during the level two alert, but it still hopes for people to avoid unnecessary contacts.

A boat detained last week by the Coast Guard on suspicion of illegally smuggling migrant workers across the border found six out of eight workers on the vessel to be infected with COVID-19. Two of these individuals had the Delta variant. These cases are classified as imported cases. It is possible that this indicates the difficulty of preventing the Delta variant from entering Taiwan, even if quarantines are mandated for individuals entering Taiwan through normal channels.

When asked about social distancing for playing mahjong, Minister of Health and Welfare Chen Shih-chung stated that he generally does not believe this is possible. Similarly, it is likely to be difficult to maintain social distancing measures for crane claw machine stores, as a result of which the Ministry of Economic Affairs will roll out appropriate measures.

When asked about reporting of open data for cases or vaccination progress, the CECC stated that it is already doing this, but if the view is that the current website used for this is not as usable as the websites used by other countries, it will look into it.

With four COVID-19 cases with travel history in Taipei Main Station, including custodians at the station, the first floor of the station has been closed for three days for disinfection.

There are fears that hotels will try to avoid reporting COVID-19 cluster events in order to keep operating or otherwise conceal parties. As a result, Taoyuan will offer 22,500 NT rewards for individuals that report violations of the law. Hotels may also have their operating licenses revoked.

According to the Executive Yuan, Taiwan should have sufficient supply of medical resources to deal with COVID-19 outbreaks at present. 90% of beds are free nationwide, while 76% of centralized quarantine hotels are free. 169 are being treated in specialized wards to treat severe cases of COVID-19 currently, with 110 are in ICUs in the greater Taipei area. Some of the deaths recently reported had onset of symptoms in May or June, when medical resources were scarcer. 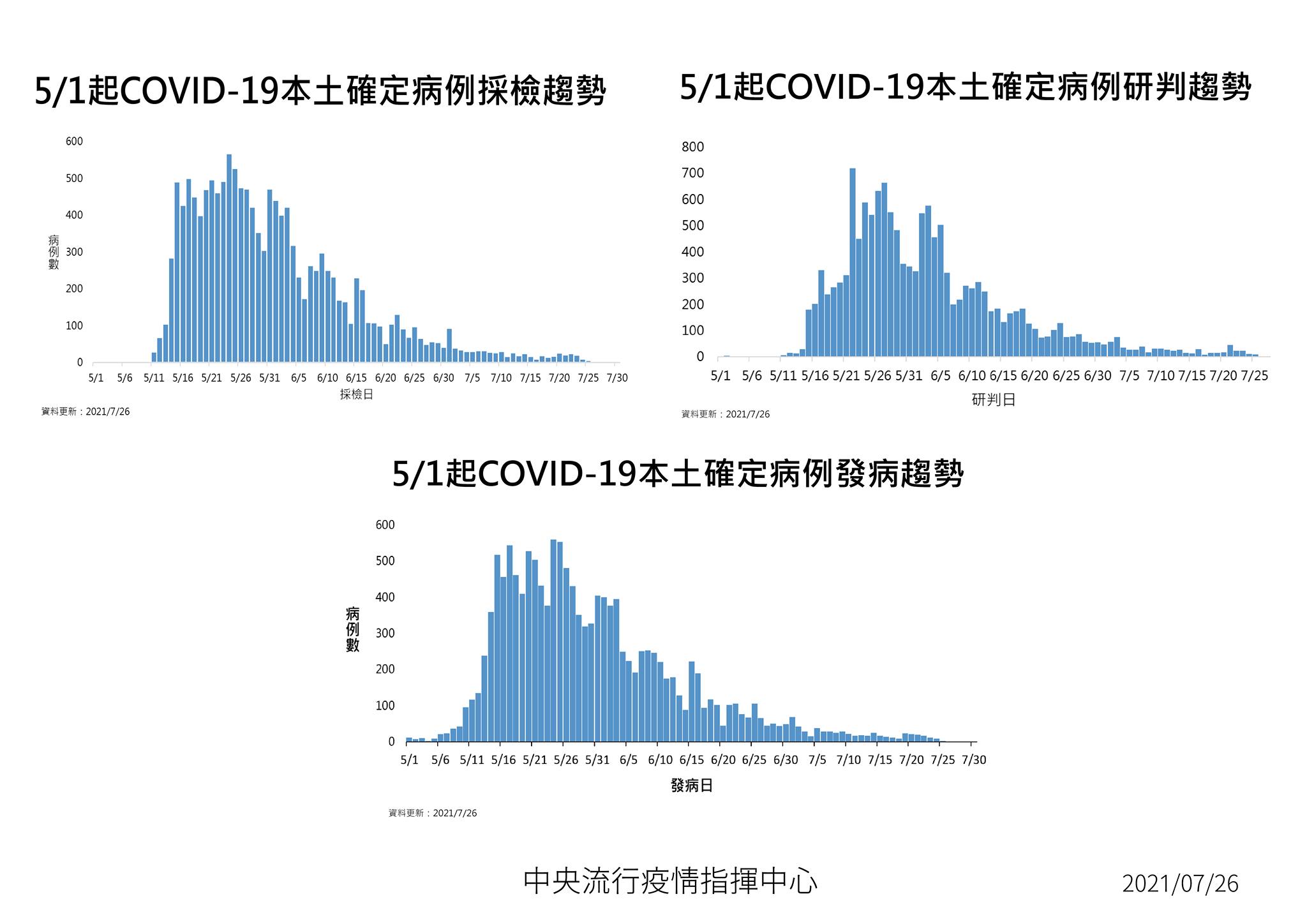 The Ministry of Foreign Affairs will consider how to resume the travel bubble from Palau.

According to New Taipei mayor Hou You-yi, all three cases from New Taipei today were already in quarantine. Though testing yesterday was at the lowest in some time, Hou called for members of the public to continue to be tested. To this extent, Hou stated that Taiwan needed to reach 60% vaccination and that this is only possible with BioNTech vaccines.

Taipei mayor Ko Wen-je stated today that three of the four cases in Taipei were from household gatherings. Ko sought to defend his record, emphasizing the difficulty finding asymptomatic cases and the “strange” nature of COVID-19. Ko stated that measures would gradually be relaxed in Taipei if cases remained below ten cases a day and there were no more than two cases per day with unknown sources of infection, suggesting that outdoor dining may be relaxed first. Ko previously stated that this week would serve as an evaluation period for whether indoor dining could be reopened, so it is unclear if this is still his position.

With concerns about Moderna vaccines close to expiry, local governments have expressed that they believe they can finish using the 50,000 doses that are close to expiry.

Former vice president Annette Lu claims that two international organizations are willing to provide Taiwan with 30 to 50 million vaccines of either the BioNTech vaccine or Johnson and Johnson vaccine, but has criticized the CECC for not responding to her. Chen Shih-chung stated today that he had received Lu’s messages but had not yet responded and would do so.

The CECC currently does not plan on implementing vaccine passports due to the low rate of vaccination. The human rights of those who have not been vaccinated will be considered with regards to this issue. Testing requirements for the workplace are implemented for those who do not want to be vaccinated. 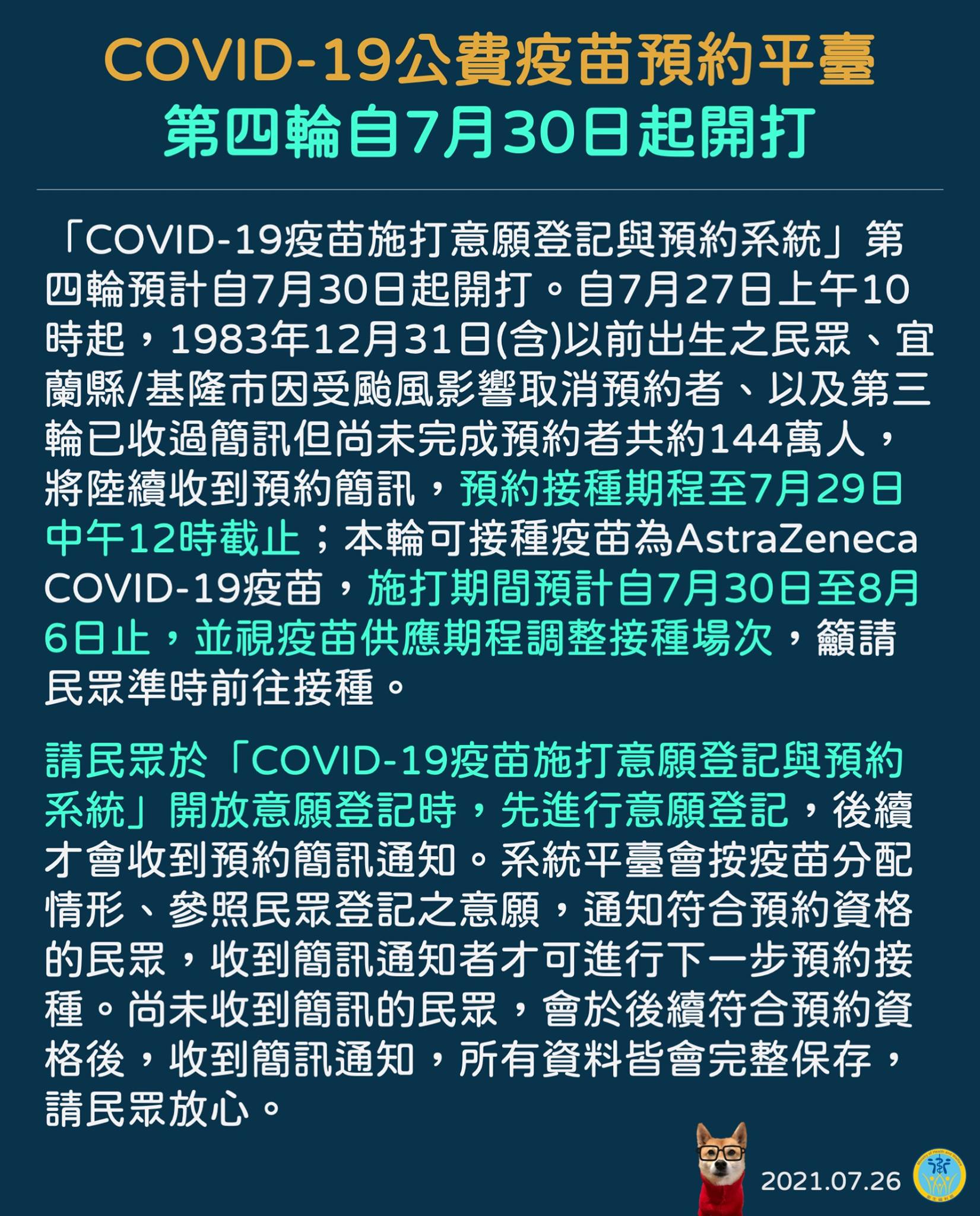 Information on the next vaccination period. Photo credit: Ministry of Health and Welfare/Facebook

Stats posted by former vice president Chen Chieh-jen show Taiwan’s quick recovery from COVID, going from having the highest Rt among 20 countries in May to the lowest by late July and the second-highest number of tests conducted among those same countries by July. This shows a quick recovery seventy days after the Novotel hotel cluster.