FOUR DOMESTIC CASES and three imported cases were announced at the Central Epidemic Command Center’s (CECC) daily press conference today. Two of these cases were already in quarantine, while three deaths were announced. There were two cases in Taipei, one case in New Taipei, and one case in Taoyuan. 89.7% of cases to date have been released from quarantine.

According to Minister of Health and Welfare Chen Shih-chung, the COVID-19 situation is stable currently. The CECC hopes for more detailed contact tracing to be undertaken, given the lower number of cases.

99,600 Moderna vaccines will arrive today at Taoyuan International Airport around 3:50 PM. This wave of vaccines will undergo quality control checks for one week before beginning to be used. The CECC is still planning how to distribute these doses of vaccines, but it is currently aiming to prioritize medical personnel involved in the fight against COVID-19 who have not yet been vaccinated. This also includes individuals such as workers involved in quality control inspections of COVID-19 vaccines. Because 99,600 vaccines is not a large number of vaccines, their distribution will be more specific. 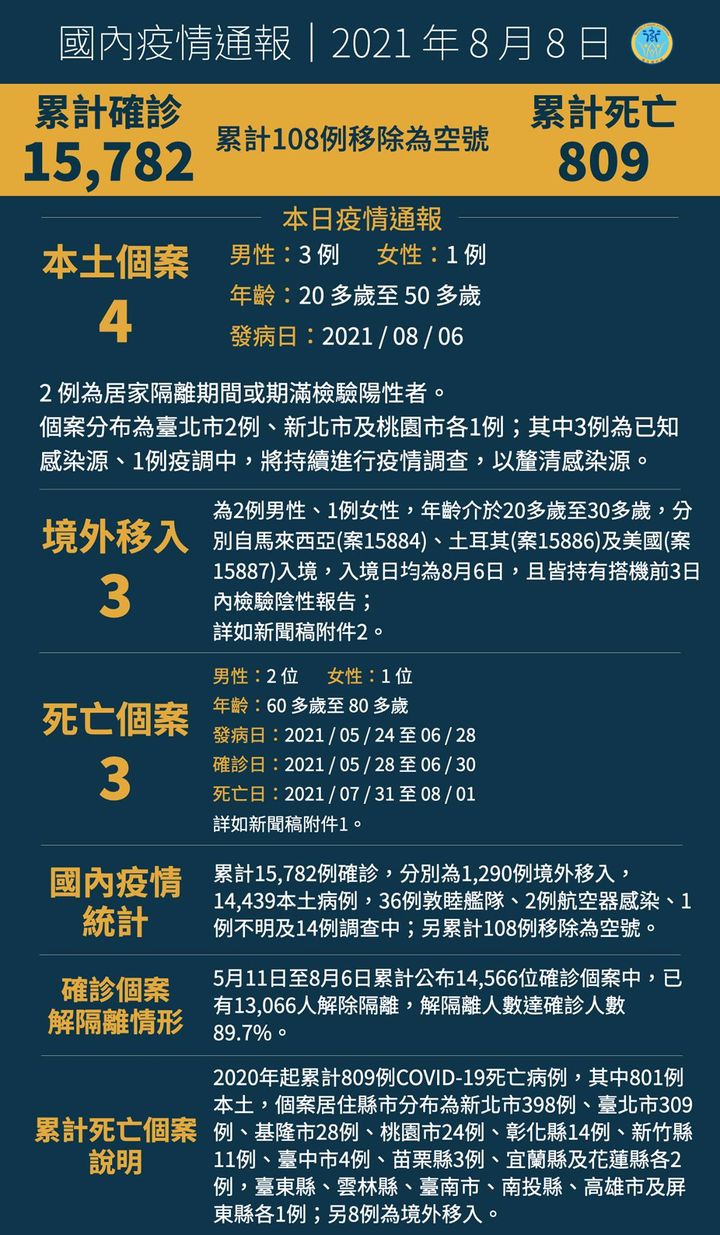 Although fewer vaccinations took place yesterday, due to the typhoon, vaccination coverage is at 36.96% currently. Per 100 people, vaccination is around 38%.

There are around 300,000 AstraZeneca vaccines left, though few Moderna vaccines remain. Allowing ages 53 and 54 in category nine to register for vaccination for this round of vaccination has brought the percentage of registration for those eligible to 81%. There are some delays in reporting the exact numbers of AstraZeneca doses left, due to the typhoon.

Careful use of Moderna during vaccination may add 1% to the supply of Moderna, but 3.9 million are still only willing to be vaccinated with Moderna. Taiwan has enough supply of Moderna from vaccine purchases, but it is not clear when they will arrive.

Results are still forthcoming from trials of mixed vaccinations.

A vendor on Hulin Street that had five negative tests before later being testing positive for COVID-19 has had their contacts listed and quarantined. This person is thought to have become infected from a friend in New Taipei, though transmissibility is believed to be low. 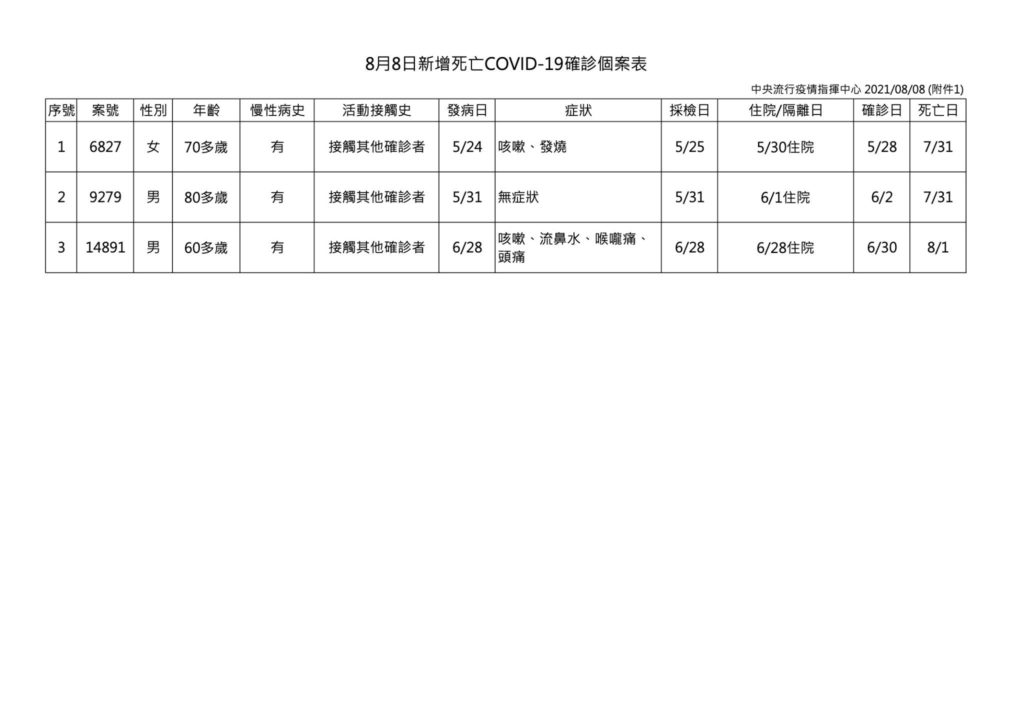 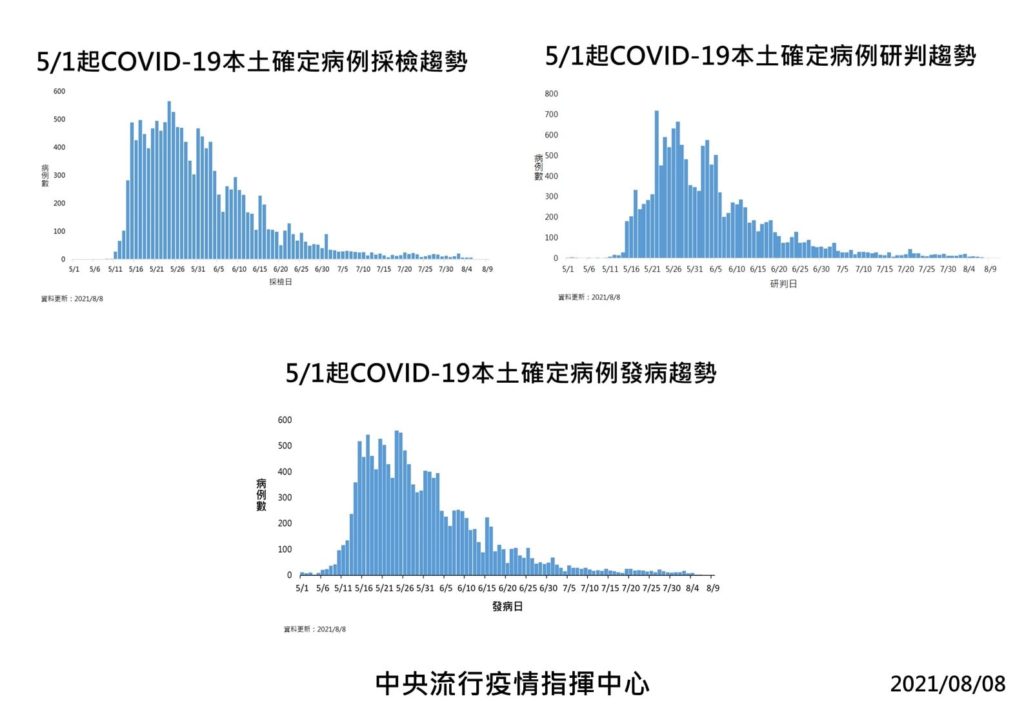 Information on the imported cases from today (left), and further data released by the CECC (right). Photo credit: Ministry of Health and Welfare/Facebook

There is some concern regarding a COVID-19 case in Taipei that took the MRT regularly between July 28th and August 6th.

A woman was vaccinated in Taichung wearing a dinosaur suit over the weekend.

2,137 tests at neighborhood testing stations found no new cases today. 1/3rd of restaurants in New Taipei have voluntarily limited themselves to half capacity. Otherwise, Hou expressed concerns about gatherings because of Father’s Day today, as well as crowds in Shifen and Bitan, with parking capacity at 30% in both locations. Consequently, Hou urged individuals not to travel there.