12 DOMESTIC CASES and one imported case were announced by the Central Epidemic Command Center (CECC) at its daily press conference today. Five cases were already in quarantine, while no new deaths were announced today. There were seven cases in Taipei and five cases in New Taipei. 87.6% of cases to date have been released from quarantine. Ten cases have known sources of infection, one case is under investigation, and one case has an unclear source of infection.

Minister of Health and Welfare Chen Shih-chung stated that today’s numbers show that the COVID-19 situation is increasingly under control, though as seen elsewhere in the world, case numbers can rebound once measures are relaxed.

The CECC reminded today of the need for the travel industry to avoid gatherings, reminding of the possibility of fines for violations. 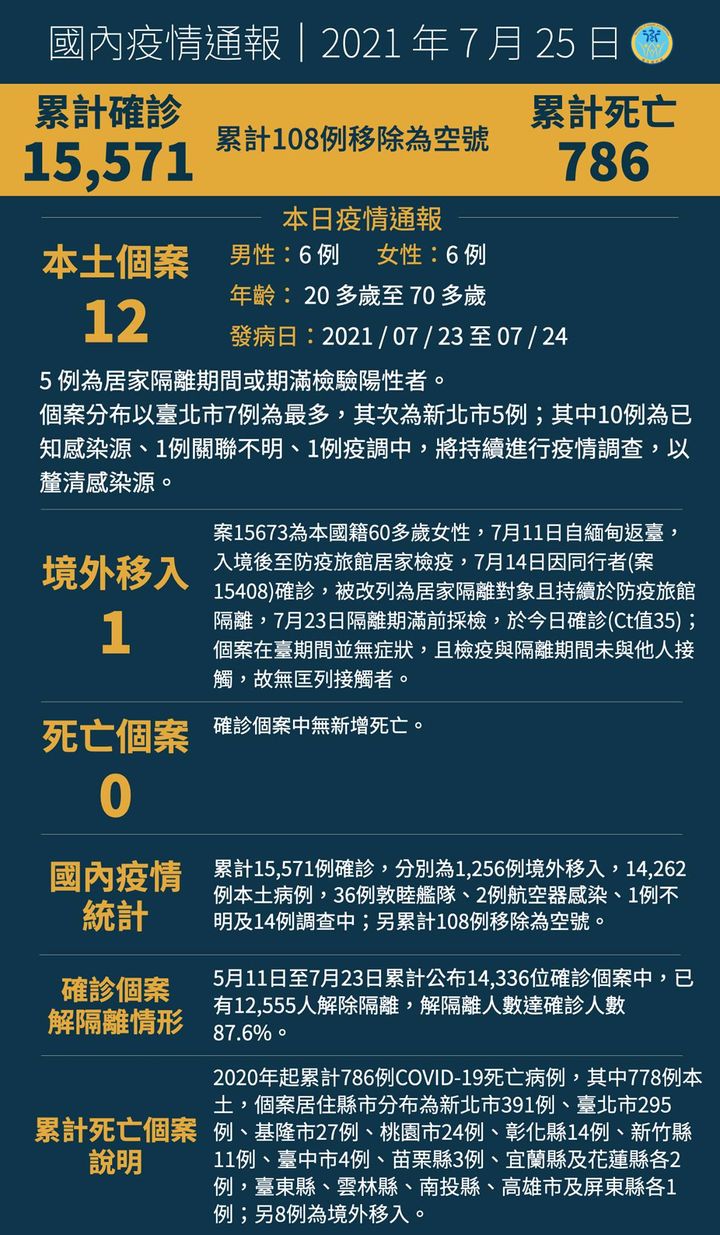 The Advisory Committee on Immunization Practices (ACIP) met today to discuss vaccination plans. Domestically manufactured Medigen vaccines will be included in vaccines paid for by the government. As a result, discussions will take place with Medigen about vaccine manufacturing capacity and how vaccination will be carried out, with this expected to be incorporated into the online system for vaccination.

There will need to be further discussion about which vaccines can be mixed and how this is to be implemented. The CECC is still aiming to vaccinate individuals after ten weeks. While some local governments hope to use the system they were previously using to conduct registration for mixed vaccination before the rollout of the nationwide online system for vaccine registration, there is also a need to discuss whether this will take place or the nationwide online system will be used.

Given the possibility of COVID-19 being a long-term issue, the CECC stated that in the long-term, it hopes to use the nationwide online system for registration for mixed vaccination, in order to maintain uniform measures.

At present, 1,210,000 appointments have been made through the online system, and this will continue to be used to carry out vaccinations.

457 are currently hospitalized for COVID-19. Medical capacity is improving, likely allowing for carrying out other medical services previously suspended to deal with the outbreak.

With more than 70,000 doses of Moderna close to expiring, the central government has stated if local governments do not have plans to use them by July 28th, it will take them back. Chen stated today, however, that local governments have expressed that they will use these vaccines before they expire and so it is hoped there will not be a need for this. The CECC hopes to avoid moving vaccines unnecessarily.

Future stimulus vouchers are still being discussed, though it is anticipated measures will be more wide-ranging than before given the severity of the outbreak. 160 of 840 billion NT of the budget for financial bailout measures is still available for use.

When asked about qualifiers for National Games, the CECC stated relevant authorities should submit plans for how to maintain COVID-19 measures if they are to take place

The Carrefour by Ximending, as well as the Taipei Fine Arts Museum, have been closed for disinfection after a visit by a confirmed COVID-19 case.

A flight to repatriate Taiwanese in Indonesia has been set for August 8th, given the severe COVID-19 situation there. 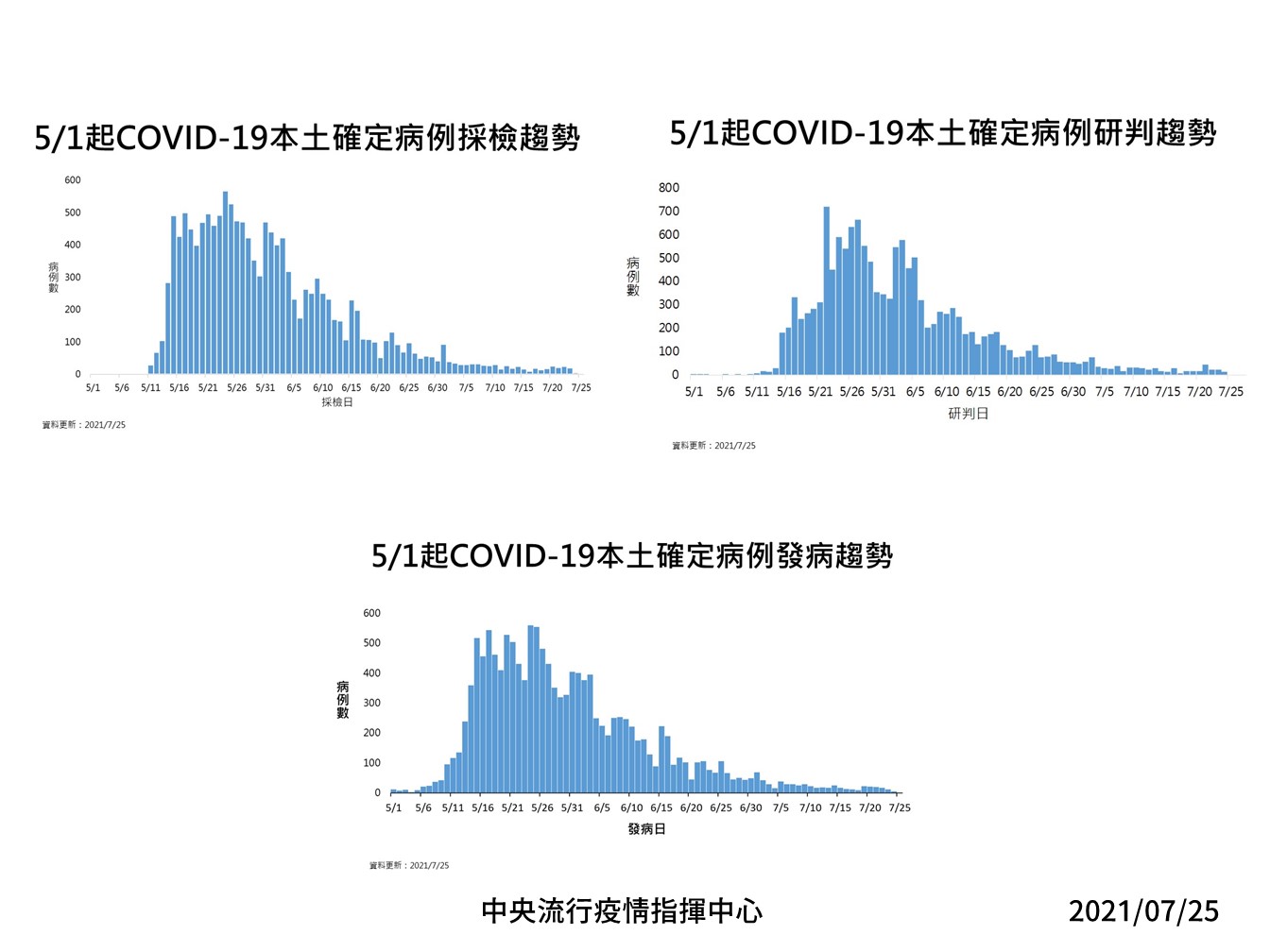 According to New Taipei mayor Hou You-yi, two of the five cases in New Taipei today were already in home quarantine. Three cases were linked to Taipei, while two were linked to Taoyuan. In order to reopen schools in the fall, vaccinations of high school teachers will take place between July 26th and July 28th, while vaccinations of cram school teachers will take place from July 27th to July 29th. Vaccinations or negative test results will be required to enter the workplace. Hou stated that New Taipei does not have many vaccines set to expire soon and so, unlike Taipei, this is not an issue.

New Taipei will provide economic relief measures for the 17,000 dining establishments affected by the outbreak, with applications beginning today and a special hotline set up for this. Subsidies will focus on allowing for takeout or COVID-19 measures in the workplace.

Otherwise, Hou called for reduced public activities even after the shift to level two alert status. Bali, Bitan, and Shifen have more than 20% capacity today, with the New Taipei city government hoping to maintain less than 40% capacity. There are reports of crowds in Qingshan and Jiufen as well. New Taipei does not recommend visitors to Wulai, Pingxi, and Bitan to avoid gatherings.