PRESIDENT TSAI ING-WEN’S National Day address this year contained relatively few surprises, even as this year, commemorations for National Day sought to place greater focus on Taiwan’s national defense. The speech was entitled “Island of Resilience: A Better Taiwan for the World”.

As with past years during the COVID-19 pandemic, Tsai touted her administration’s record fighting COVID-19. While Tsai began by offering condolences for those that had passed away from COVID-19, Tsai also raised that Taiwan’s economy grew by 6.57% in 2021, and that the International Institute for Management Development World Competitiveness Yearbook ranked Taiwan seventh in the world for competitiveness.

To this extent, Tsai also touted the economic accomplishments of her administration, bringing up Taiwan’s preeminence in global semiconductor manufacturing and information technology. Tsai emphasized the need to be proactive for Taiwan to maintain such advantages, however, as well as to build a more resilient economy capable of weathering global shocks. This would involve deepening economic relations with Southeast Asian countries as well as securing supply chains.

Livestream of the National Day commemoration

Otherwise, where domestic policy is concerned, Tsai discussed efforts to improve the social safety net, such as that social welfare spending in the 2022 budget surpassed 600 billion NT and would surpass 700 billion NT next year. Tsai stated that efforts were being made to improve measures for natural disasters, such as earthquakes, and to deal with the challenges of an aging population and declining birthrate.

In terms of military readiness, Tsai touched upon efforts to speed up the development of missiles and naval vessels, such as regarding the first domestically-developed landing platform dock, the Yushan, or the indigenous submarine program. Tsai raised the government’s moves to improve mobilization capacity for reservists, such as through the establishment of the All-Out Defense Mobilization Agency, and praised civil defense efforts. However, Tsai did not make any new policy announcements regarding defense initiatives.

Lastly, in directly addressing China, Tsai urged mutual respect between both sides as the basis of maintaining cross-strait peace, while stressing that Taiwan would not compromise with regard to its commitment to democracy and freedom. Tsai otherwise criticized attempts by Beijing to sow political divisions in Taiwanese society for its own benefit, alluding to Chinese disinformation and cognitive warfare.

In particular, Tsai sought to emphasize that armed conflict was not an option for either Taiwan or China, as well as being careful to drive home the point that Taiwan was not the aggressor. Tsai framed Beijing as disrupting the status quo, and stated “Provided there is rationality, equality, and mutual respect, we are willing to work with the Beijing authorities to find a mutually agreeable arrangement for upholding peace and stability in the Taiwan Strait.”

Apart from Tsai’s speech, other elements of the National Day commemorations were aimed at highlighting Taiwan’s democracy and contemporary cultural pluralism. This included starting with performances by Indigenous artists, for example, by the rock band The Chairman, or from youth dance groups near the conclusion of the ceremonies. Likewise, the Kyoto Tachibana Senior High School band, which had made waves after a video of their performance at the Grand Hotel went viral, performed as part of the ceremonies. The performance served as an indirect gesture toward Taiwan-Japan ties.

Lawmakers from the US and Japan were also present for National Day. This included US House of Representatives member Eddit Bernice Johnson, chair of the House Committee on Science, Space and Technology, who was visiting Taiwan as the eighth US delegation to visit this year. A delegation of Japanese lawmakers from the All-Party Parliamentary Group of the Japanese Diet, too, visited, as did Palauan president Surangel Whipps Jr. 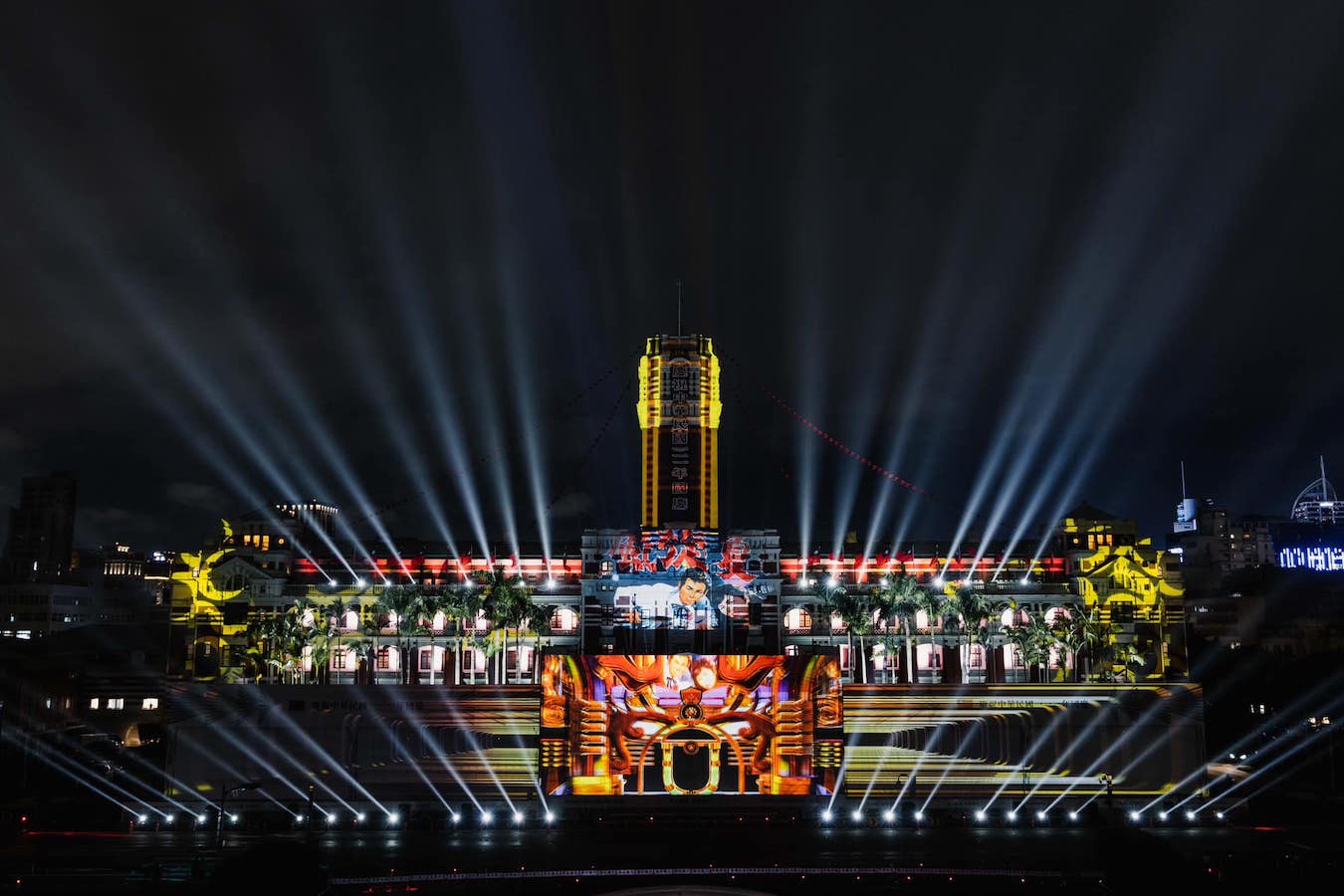 One notes that Chinese military threats directed at Taiwan around the time of National Day this year, or China’s own National Day on October 1st, were not on the level of last year. Last year, Chinese air incursions into Taiwan’s Air Defense Identification Zone increased to a daily basis, with the number of planes that conducted air incursions frequently setting records. Though Chinese air incursions have continued, they did not set records this year, with China likely not intending to escalate in the short-term after live-fire drills that took place closer to Taiwan than during the Third Taiwan Straits Crisis, following a historic visit to Taiwan by US House Speaker Nancy Pelosi.

In the meantime, there has continued to be some contestation between the pan-Green and pan-Blue camps regarding the meaning of National Day. The KMT has in past years reacted against what it sees as the DPP’s denigration of ROC institutions, or the Tsai administration’s use of the framing “ROC (Taiwan)”. Indeed, Tsai continued this framing in her speech this year, but in previous days, former President Ma Ying-jeou lashed out against the framing of National Day as “Taiwan National Day” rather than “ROC National Day”, prompting criticisms from UMC founder Robert Tsao.