30 DOMESTIC CASES and two imported cases were announced at the Central Epidemic Command Center’s daily press conference today. 20 of these cases were already in quarantine, with four deaths announced. Taipei and New Taipei both reported eleven cases, while there were seven cases in Taoyuan and one case in Hsinchu.

According to Minister of Health and Welfare Chen Shih-chung, while there may be more cases today, twenty-four of these cases have known sources of infection while sources of infection for five are unknown, and one is under investigation. Chen stressed that although cases are up today, this does not affect overall trends regarding the CECC’s decision-making about whether to lift the level three alert on July 26th. 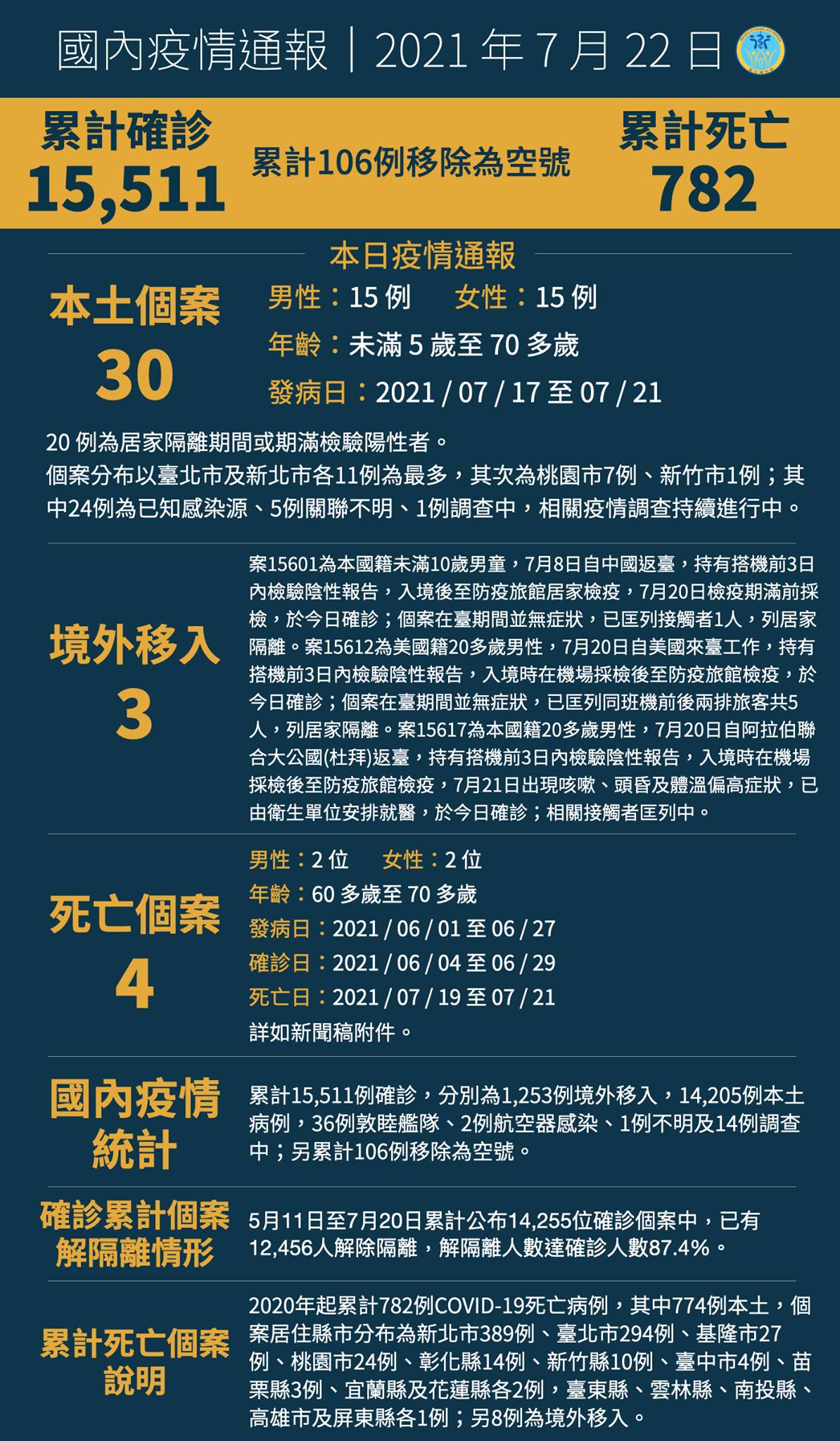 Regarding vaccinations, the CECC reemphasized that starting from July 12th, there is between ten and twelve weeks vaccination for Moderna vaccines to maximize coverage due to the fact that Moderna provides 81% protection with one shot. If the vaccination is canceled due to the current typhoon, those who made appointments to register will be eligible for future vaccination periods.

The Executive Yuan announced today that Taiwan has signed a purchase order for Moderna vaccines for quarter four of this year and last year, increasing the number of Moderna vaccines that Taiwan has purchased to 36 million vaccines. These are primarily aimed at third dose vaccinations and should include new vaccines aimed at dealing with more infectious variants of COVID-19. One million doses are expected in quarter four and twenty million are expected next year.

Third dose vaccinations are not expected to begin this year, though the CECC will evaluate the international situation. Instead, the CECC will focus on widening coverage as much as possible and individuals who have not received their first two doses by the time these vaccines arrive can still be vaccinated with their first two doses. This means that the general direction for future vaccinations has been set, but the CECC is still in discussion with other vaccine manufacturers.

With reports of Chinese Cultural University not having sufficient vaccines for medical interns, the CECC will communicate with them about this issue. Medical interns should be included in category one. The CECC was also asked about an individual that returned from China that missed his vaccination appointment. This person should remain eligible for vaccination, but the CECC hopes for people to be vaccinated within their vaccination periods in order to ensure adequate second dose supply. When asked about an individual that was moved from category nine to category ten, both categories are eligible for vaccination currently so this should not affect their ability to be vaccinated, but the CECC reclassified them for more accurate information.

The CECC will announce concrete details of any relaxation of the alert level in the next few days, though it is aware that other countries have seen an explosion of cases once they release measures. It is also keeping in mind the effects of lockdown fatigue. It is not expected that karaoke parlors or other similar establishments will be able to reopen in the near future. Premier Su Tseng-chang also stated earlier today that any reduction of alert levels would be gradual in nature.

When asked about committee members for evaluating domestically approved vaccines, Chen stated that such individuals are required to disclose if they are shareholders of companies, but that this did not prevent their participation in the evaluation process. Yet if there is a conflict of interest, they must abstain from decision-making.

A man in his thirties that died after vaccination is probably the youngest death to date after Moderna, but had heart conditions.

CECC does not have daily data on medication used to treat COVID-19, but can check with hospitals about integrating this into daily press conferences in the future if needed

Taipei mayor Ko Wen-je has lashed out at the CECC, claiming that official Wang Bi-sheng—who was sent to oversee management of the Taipei Agricultural Products Marketing Corporation clusters—did not do anything and that all work was carried out by the Taipei city government. Chen Shih-chung maintained a diplomatic tone when asked about this accusation today and stressed cooperation with the Taipei city government. When asked about this today, Ko asserted that Taipei had made the majority of the decision-making and refused to elaborate further. 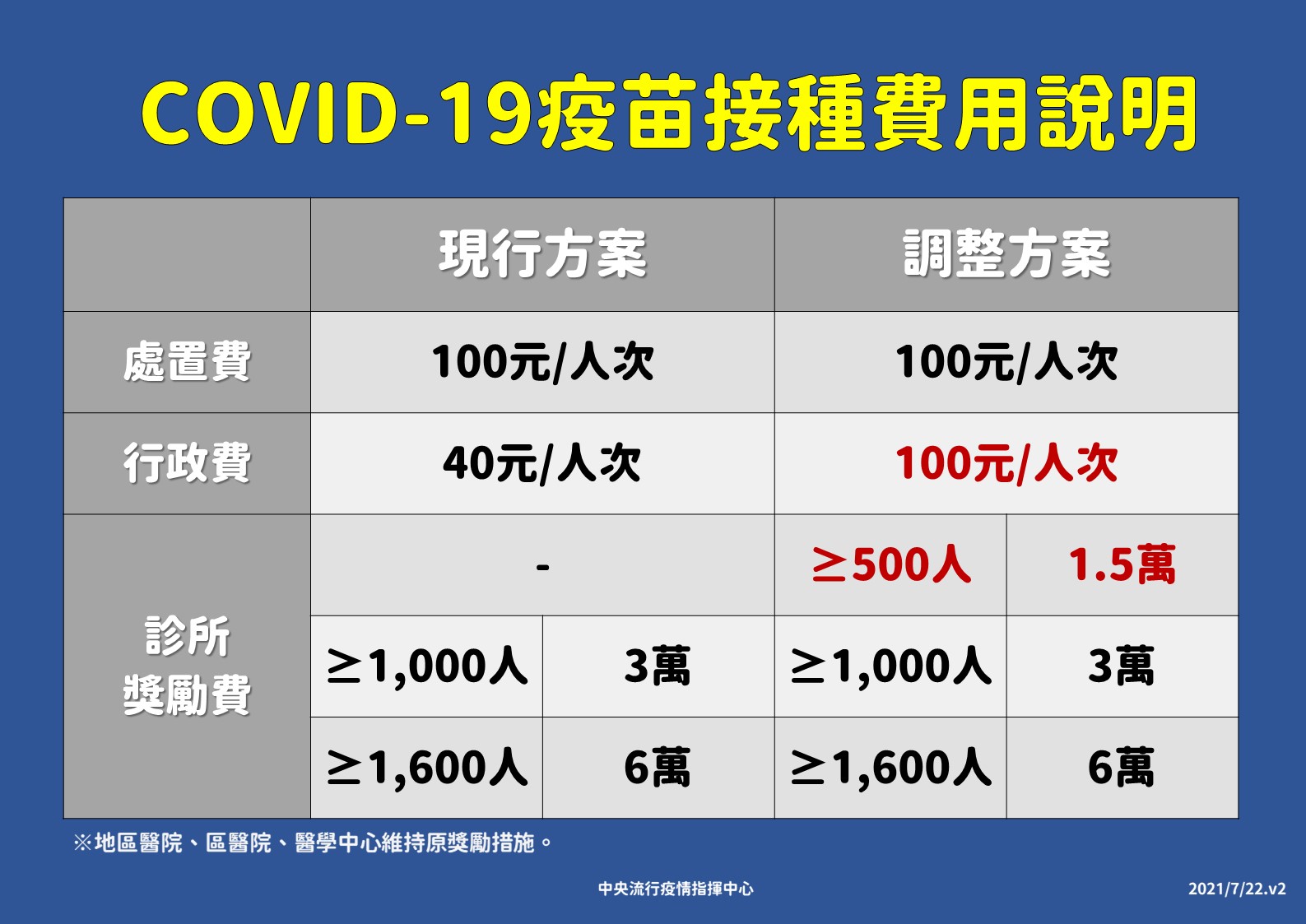 Although the Pingtung Delta variant cluster is contained and under control, Taiwan reported its first death from the Delta variant today, which was in connection with the cluster. The death is the 72-year-old wife of a fruit seller, who had preexisting conditions including high blood pressure and diabetes.

A clinic in New Taipei that announced it would require a 200 NT registration fee for vaccines, defying the CECC because vaccines are currently paid for by the government because it cited lack of income, has been blocked from vaccine distribution. The incident, however, has led some DPP legislators including Yu Tien and Chen Ting-fei to call for increased subsidies for clinics.

At the CECC daily press conference today, Chen Shih-chung stated that local clinics were right to raise the issue of costs for vaccines. Subsidies for administrative costs will be increased from 40 NT to 100 NT, along with the existing 100 NT subsidy for carrying out the shot. The CECC hopes to improve the financial conditions for clinics so that more are willing to sign on as vaccination sites. Taipei city emphasized that it would continue to provide subsidies and that it hoped to simplify the vaccination registration process.

The Executive Yuan has decided to suspend increases in electricity prices for July, apart from those that use more than 1,000 kilowatt hours of electricity.

The Taiwan Higher Education Union has called on education institutions to extend COVID-19 subsidies to international students studying in Taiwan, who may also be affected by the outbreak, and may already be coping with difficult financial conditions due to studying in a foreign country.

521 tested at the Jiaqin Market were all negative, with negative tests required to work at the market in the future. 1,460 or so were tested at Mitsui Outlet Mall and results should be known soon. Either way, today’s uptick in cases in New Taipei is not linked to the outlet.

New Taipei plans to reopen schools in the fall, but it will evaluate conditions. Daycares and kindergartens will reopen after July 26th. Relaxation of level three measures will be gradual, in that restrictions on indoor gatherings will not increase from five to 100 and on outdoor gatherings from 100 to 500 overnight.

According to Taipei mayor Ko Wen-je, eight of the eleven cases in Taipei today were already in quarantine. Enforcement of all confirmed cases being sent to quarantine hotels will start tomorrow, with fears of family clusters caused by home quarantine and because 8% of cases in quarantine later turn out to be positive.

Although there were six cases in Wanhua today, after asserting that Wanhua was no longer a hotspot yesterday, Ko maintained that transmission chains are spread across districts of Taipei.

Kindergartens and daycares are to reopen after July 26th in Taipei. 1,893 cram schools have applied to reopen, but Ko stated that it is a question as to when they can reopen depending on the progress of vaccination. 18,000 people are registered for vaccination among workers at cram schools. Like Hou and Su Tseng-chang, Ko emphasized that the lifting of measures will be gradual. 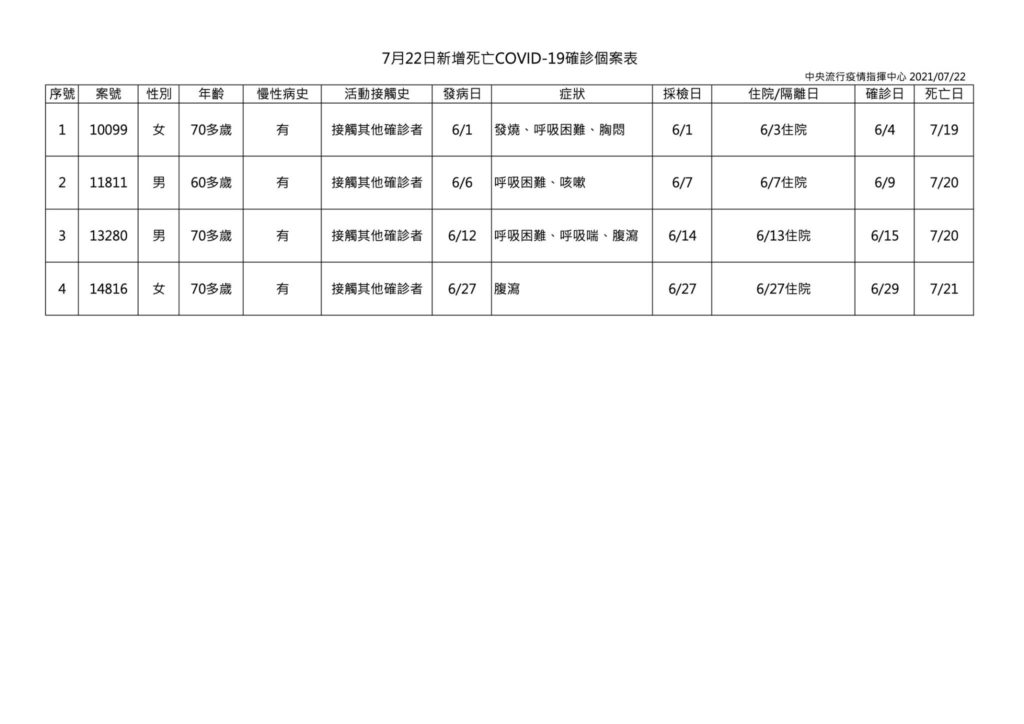 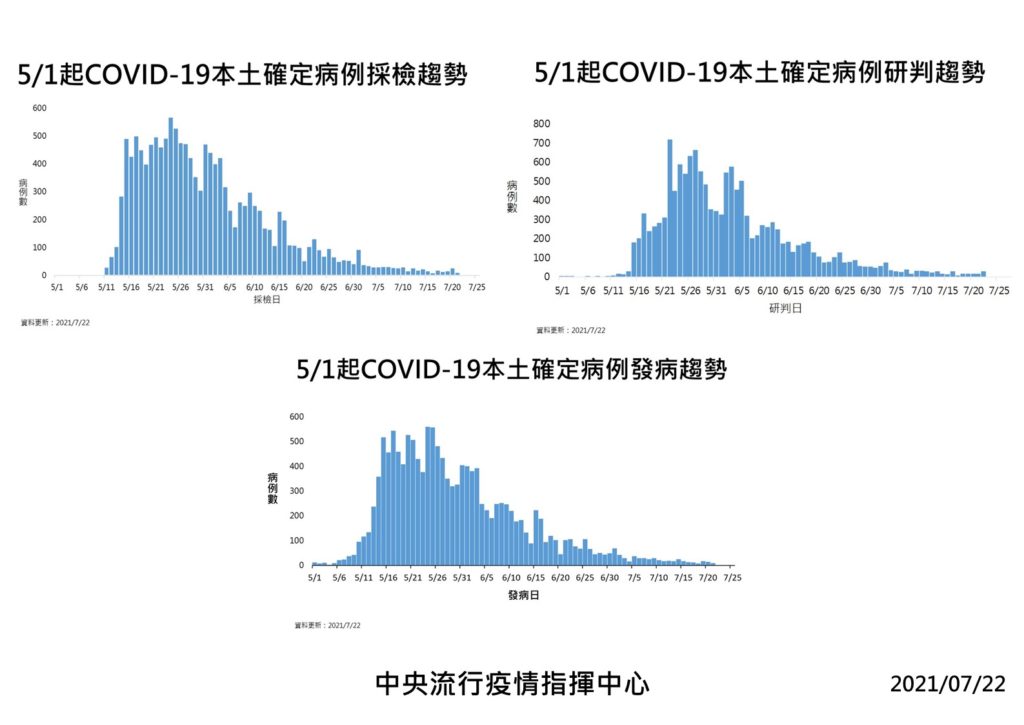 Information on the deaths cases from today (left) and on the deaths announced today. Photo credit: Ministry of Health and Welfare/Facebook

Taipei will continue telephone appointments during working hours for vaccination appointments up until July 30th for individuals experiencing difficulties using the online system, such as among the elderly. Lizhang or their aides can assist with this as well.

Homeless shelters will be set up for the homeless during the typhoon. Taipei will send testing cars to conduct tests for all homeless in Wanhua and by Taipei Main Station. Individuals with negative test results can enter shelters.

When asked about the possibility of using domestically manufactured Medigen vaccines for second dose vaccination, Taipei officials claimed that Medigen should focus on convincing the public to be vaccinated with their first dose of Medigen.

To that extent, asked about reports that Taipei sought three different channels for purchasing vaccines, Ko stated that this was earlier on in the outbreak when supply was limited, but that it’s evaluating when vaccines purchased by non-government groups come in. Ko was dismissive of the Moderna vaccines purchased by the central government, stating that vaccine purchases did not matter and what was important was when such vaccines arrived in Taiwan. Nonetheless, if Taipei purchases vaccines, this will go through oversight measures from the CECC and central government.