32 DOMESTIC CASES and four imported cases announced by the CECC at its daily press conference today. Thirteen of these cases were already in quarantine. Twelve deaths were also announced.

One of the cases in Taoyuan was linked to a shipping worker at China Airlines. Second round testing at the Huannan Market has found 4 new COVID-19 cases, though one was an old case. Ten have been quarantined in connection to the new cases. 2,422 tests were conducted yesterday, with more than 1,400 tests conducted today. There were no new cases in Pingtung, even after follow-up testing at the Fangliao Hospital, but some cases already found have been confirmed as having the Delta variant. The case of a Garmin worker in New Taipei who was found to be positive with COVID-19 is still being investigated. 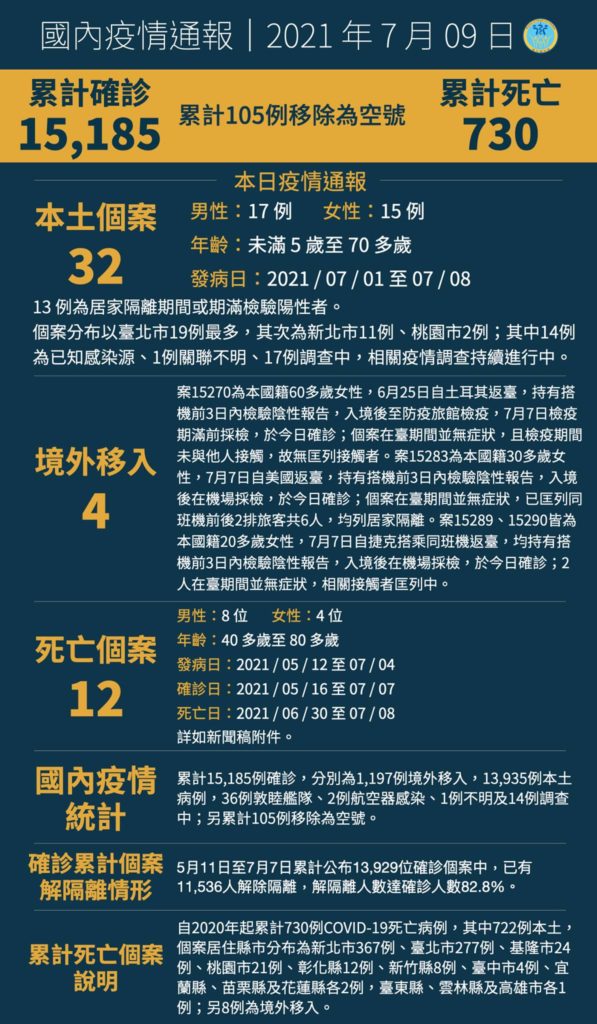 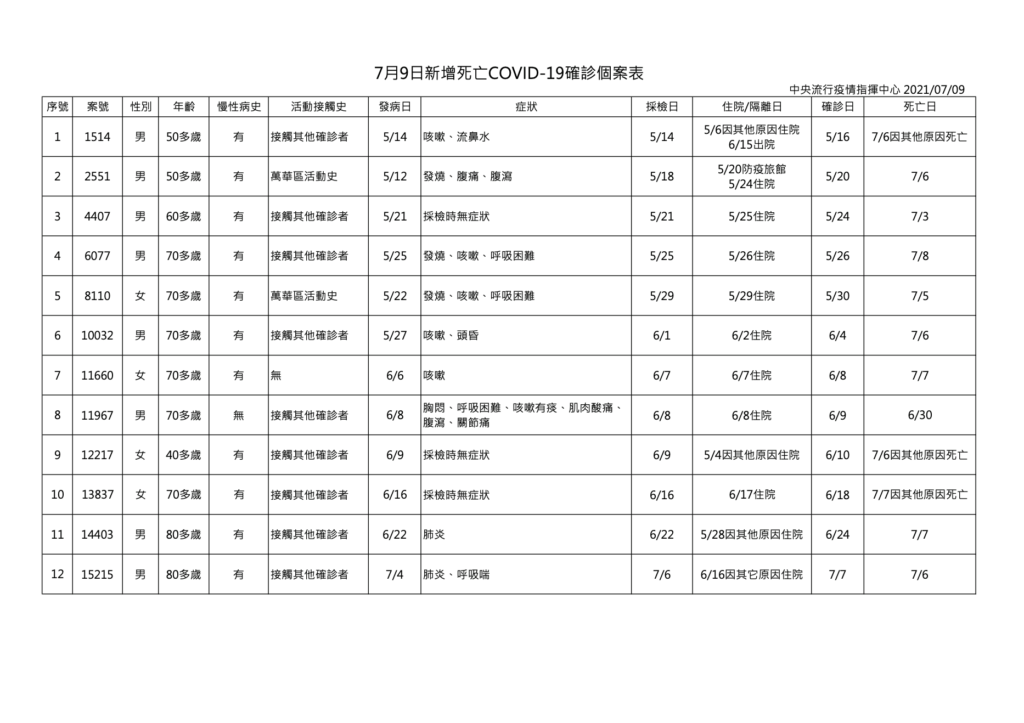 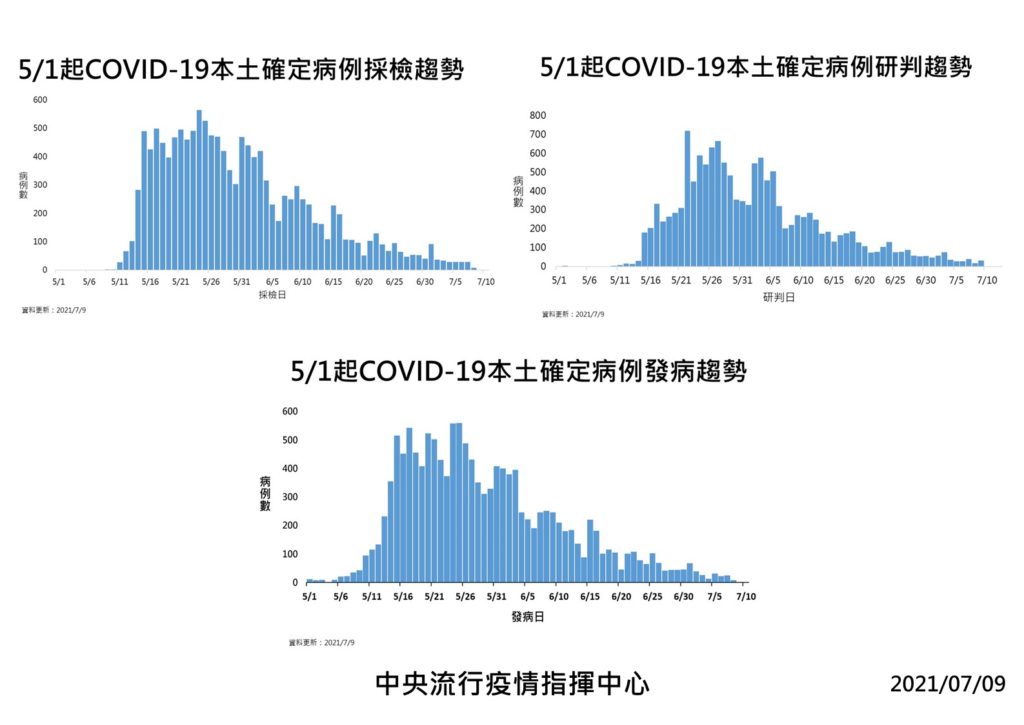 The CECC has started to genetically test imported cases from July 2nd, to see which variant of COVID-19 that they have. As such, though most cases could not be confirmed as to what variant they were, details for five imported variant cases were reviewed by the CECC press conference. This included the grandmother and son that returned from Peru with the Delta variant, a woman that returned from Cambodia with the Alpha variant that was slightly different than usual, a child that returned from the US with the Gamma variant, and a returnee from the UK.

Minister of Health and Welfare Chen Shih-chung was questioned about some seeming contradictions in policy for reopenings today, such as why indoor gatherings of more than five were forbidden, but movie theaters are allowed to reopen. Chen acknowledged that the relaxation of measures is keeping into account lockdown fatigue, since individuals becoming too fatigued and defying measures would lead to the spread of COVID-19. Businesses have also been hard hit by the pandemic.

Water activities are not allowed in parks or other public areas because it is difficult to wear masks while in water. CECC still does not plan to allow schools to reopen for summer classes, to avoid gatherings and allow for more time to vaccinate teachers. Some arrangements for children with special needs can take place at schools.

Reopening of gyms has led to some controversy. Gyms are allowed to reopen, but required to maintain social distancing measures indoors, equipment that is shared between users is not allowed, and shower rooms are closed. As such, individuals can only carry out exercises where they are allowed to bring their own equipment. The CECC stressed that no businesses will be closed forever.

However, New Taipei mayor Hou You-yi has indicated that he does not intend to allow for reopening of indoor dining, or of libraries, theaters, cultural centers, and exercise facilities. Hou stated that he believes that the relaxation of these measures may be confusing and difficult to carry out for businesses and that New Taipei is still facing COVID-19 cases, as a result of which he will not allow for the relaxation of measures. Hou stated that businesses that violate strengthened level three measures will be fined between 3,000 NT and 15,000 NT, although this is somewhat unclear as to whether Hou will genuinely fine restaurants that reopen.

Taipei mayor Ko Wen-je also stated that indoor dining will still be banned in Taipei after July 13th, with takeout only allowed for restaurants and markets. Yet Ko seems to be aiming for an intermediate approach. 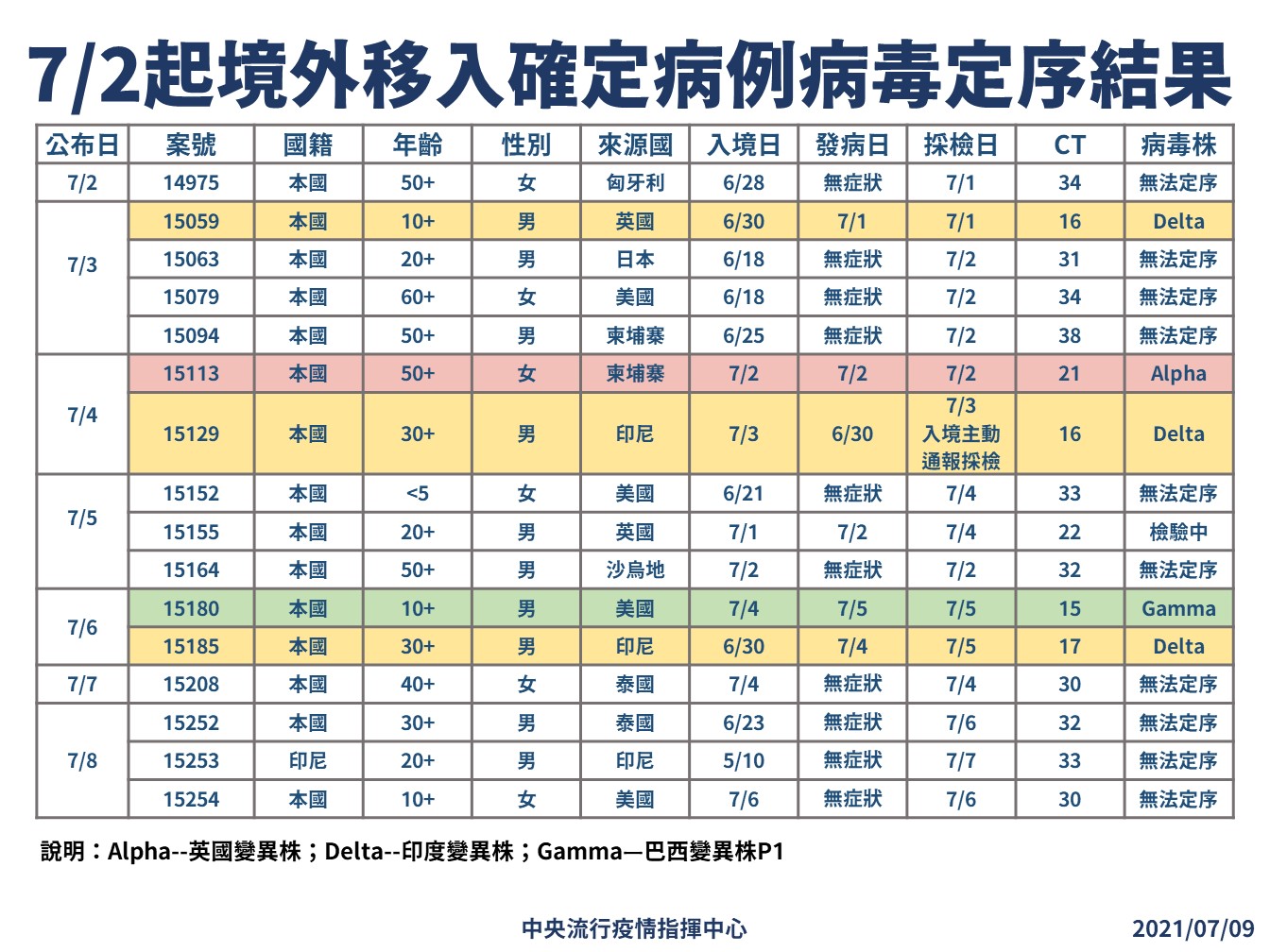 Testing among imported cases for variants. Photo credit: Ministry of Health and Welfare/Facebook

Tracks and fields, zoos, and arcades are not reopened because they are not vital for everyday life or business. Many sports facilities will not be reopened, though some sports will limit participants to under forty or under twenty, and others sports limited to one or two players. Performances will primarily still take place online, with QR code registration to take place for workers, and performance groups needing to provide a list of performers 72 hours in advance. Visitors to exhibitions must make reservations in advance and disinfections will be carried out between visitors.

Ko pointed to other countries under lockdown and suggested that measures will still be necessary because of the possibility of the Delta variant entering Taiwan. Otherwise, a Taipei city official made comments that could be interpreted as claiming that HIV-positive individuals were a group particularly vulnerable to spreading COVID-19.

According to the CECC, reopenings can only take place if local governments agree to this, as they may know local conditions better. It is unlikely the CECC did not anticipate the possibility of local governments deciding not to follow the relaxed measures, but there is wiggle room for governments outside of greater Taipei that have not seen cases in past days to relax some measures.

Nevertheless, Taoyuan mayor Cheng Wen-tsan of the DPP also later announced that indoor dining would not be opened in Taoyuan, suggesting that declining to relax level three measures may cut across party lines, while calling for measures to remain consist for New Taipei, Taipei, Taoyuan, and Keelung. As such, Keelung is likely to follow suit.

Four night markets will be reopened in Taoyuan with the relaxation of some level three conditions. Crowd control measures will be maintained for the night markets.

There have been no new cases at schools for five consecutive days, with the number of COVID-19 cases among students having remained at 677. With the relaxation of some level three measures, this will include the opening of outdoor areas in schools for public use, though exercise equipment will remain locked.

While temples are allowed to apply for reopening if they are able to maintain social distancing measures indoors, the use of moon blocks is forbidden.

Reports indicate that some establishments where sex work take place have resumed operation in Wanhua, where the current outbreak started. This has raised some concerns about the possibility that COVID-19 will again spread through establishments such as tea parlors, KTVs, and massage parlors.

Taipei mayor Ko Wen-je continues to claim to have been set up by the CECC at the press conference where Ko was publicly criticized by legislator Freddy Lim, asserting that he thought the press conference would be a meeting and arrived to find that it was a press conference. Wang Bi-sheng, the CECC official that heads the handling of the Huannan Market cluster, has stated that Ko was notified beforehand of the location.

During an appearance on a talk show hosted by KMT central committee member Jaw Shaw-kong, Ko threatened to reveal a list of workers at the Presidential Office that had been vaccinated. Taipei deputy mayor Huang Shan-shan later denied that the Taipei city government had any such list. Criticizing him, Taipei city councilor Miao Poya called on Ko to publicize the list of individuals who had received vaccinations out of order at Taipei clinics and hospitals while he was at it, with Ko having declined to do this. According to Miao, Ko also tried to avoid use of Audrey Tang’s nationwide vaccination system and set up a Taipei-specific system, leading to confusion.

With some news reports claiming that the US has found the AstraZeneca vaccine to be carcinogenic, leading to fears about the vaccine, the CECC has stated that this is disinformation. The CECC also stated that there is not use of mixed vaccines taking place in Taipei when asked about a specific case, where mixed vaccination took place. This was likely due to a severe reaction to the first shot of vaccine, resulting in mixing of vaccines.

The CECC stressed that Taiwan has received seven million vaccines to date at the press conference, but that vaccines are undergoing inspection for quality control. Some online disinformation alleges that this is not true, due to delays distributing vaccines.

The representative offices of Indonesia, the Philippines, Thailand, and Vietnam have issued a joint statement calling on the government to include migrant workers in the current vaccine priority list. Though there has been some discussion by the CECC of how to vaccinate migrant workers, it is more probable that migrant workers will be vaccinated when their respective age categories open up for vaccination, with the CECC primarily opening up new vaccine categories based on age currently. 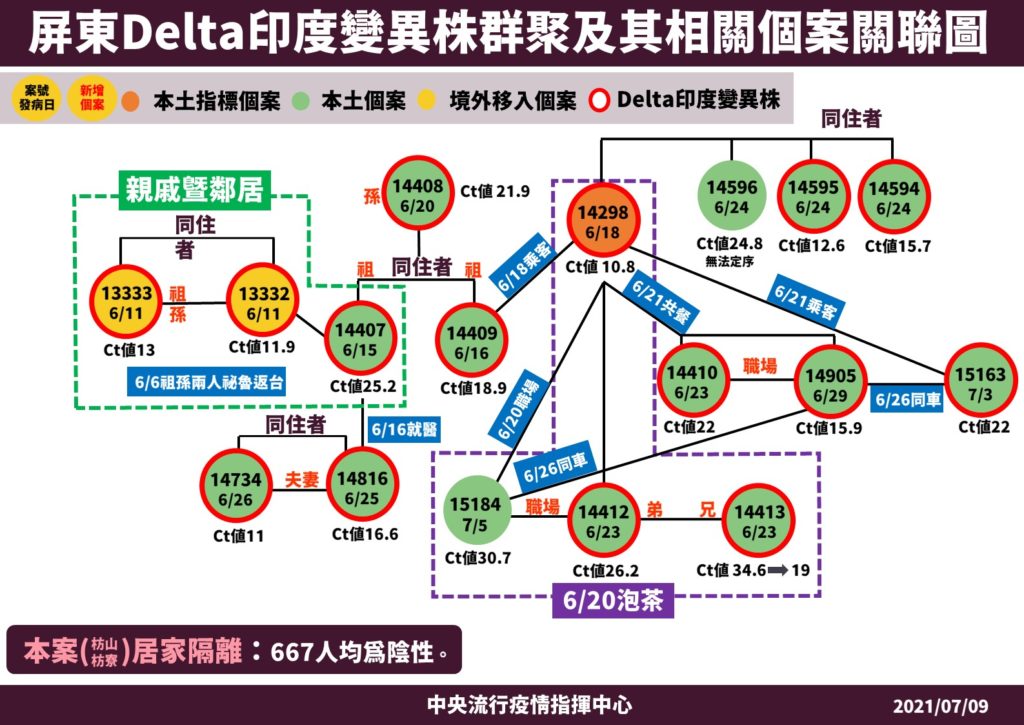 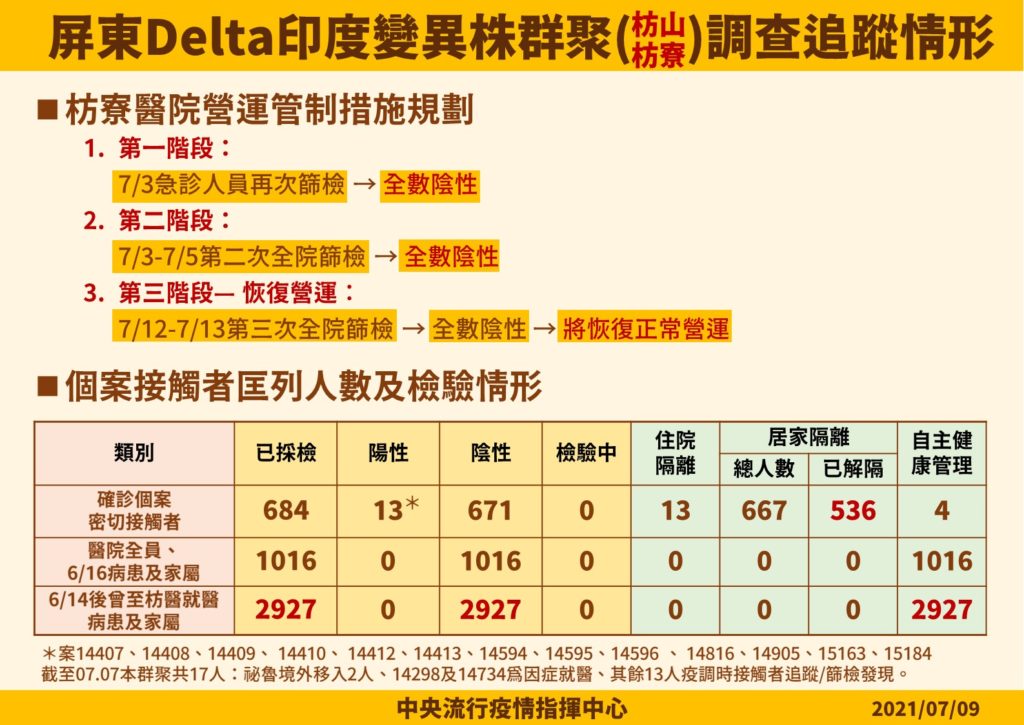 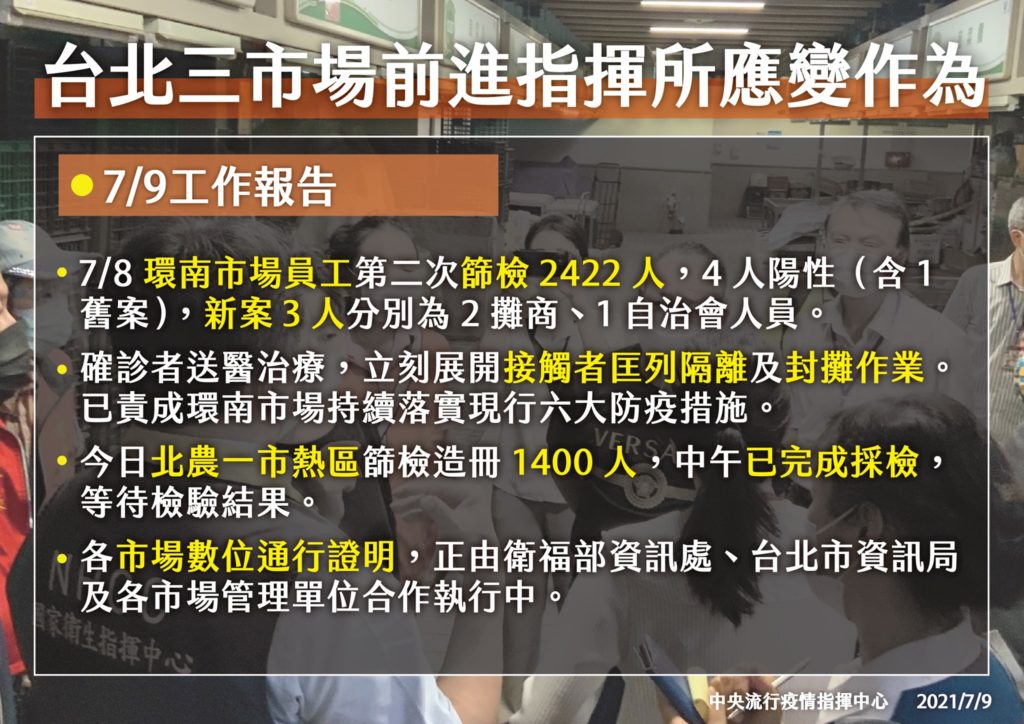 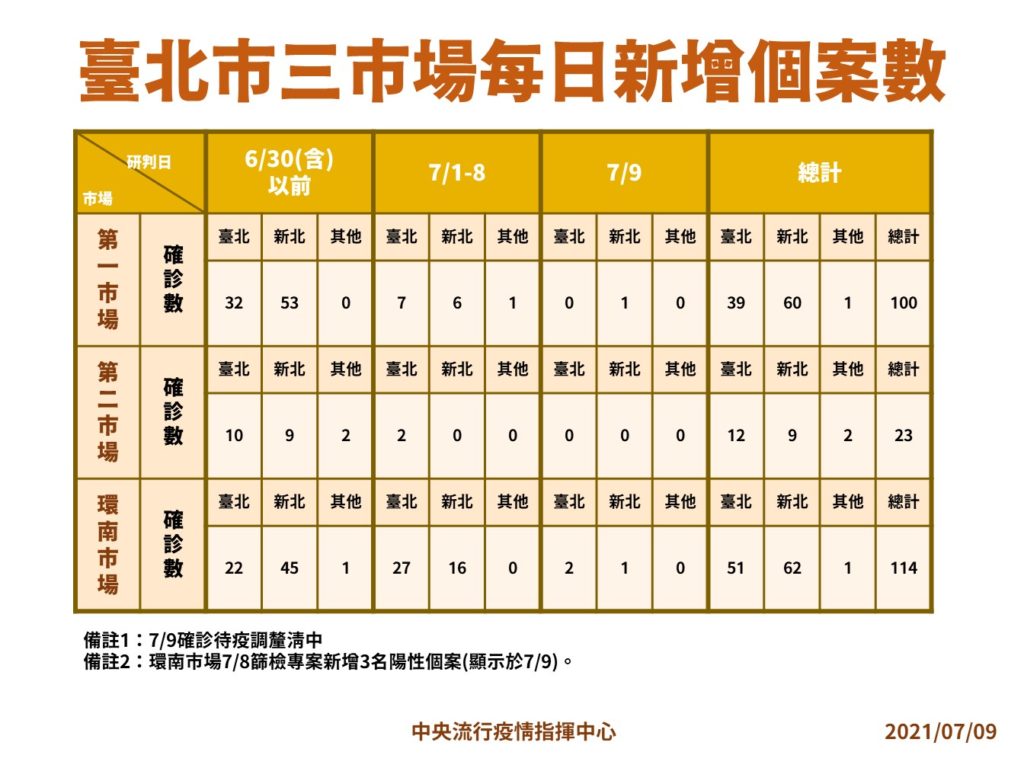 Information on measures and testing at Wanhua markets and in Pingtung, as well as the updated contact tracing map for the Pingtung Delta variant cluster. Photo credit: Ministry of Health and Welfare/Facebook

Controversy broke out after the White House’s COVID-19 response team tweeted a photo listing Taiwan on the list of countries that the US had donated vaccines to. The photo was later deleted due to the fact that the ROC flag appeared on the list. The Biden administration has stressed that the tweet was a mistake and should not be seen as indicating any shift in US policy on Taiwan.

When asked if Hou You-yi will use Audrey Tang’s national vaccination system or try to use its own system, Hou states that vaccine distribution from the CECC will be through the system in the future, so New Taipei will switch to the new system. The tenor of this comment indicated that Hou is trying to frame this as the central government forcing New Taipei to switch to the new system in spite of its already working system, otherwise New Taipei would be cut off from vaccines. One has seen similar framing from Ko in past days.