Outrage Over The DPP’s Loss In Hualien?

THE OVERWHELMING loss of DPP candidate Chang Mei-hui to KMT candidate Wei Chia-hsien in a by-election for the position of mayor of Hualien has left many in the pan-Green camp in shock and disbelief. Elections took place on August 27th. Chang’s loss was by close to four thousand votes, with 13,958 votes to Wei’s 17,923 votes. The by-election for mayor of Hualien occurred after the unexpected death of DPP mayor Tien Chih-hsuan in late May. Tien, who was Chang Mei-hui’s husband, won handily with over 10,000 votes more than his KMT competitor. At the time of Tien’s election, this was seen as historically significant for the DPP in making inroads into Hualien, traditionally thought of as pan-Blue territory.

Outraged reactions from the pan-Green camp include accusations of vote-buying by the KMT in the election. Some blame was directed at Hualien voters themselves for voting KMT. DPP legislator Tuan Yi-kang, a former member of the standing committee of the DPP and a member of the New Tide faction, was forced, for example, to walk back several public statements made on social media—not only accusing the KMT of vote buying, but also directing his anger towards Hualien voters for what he saw as their buying KMT votes. 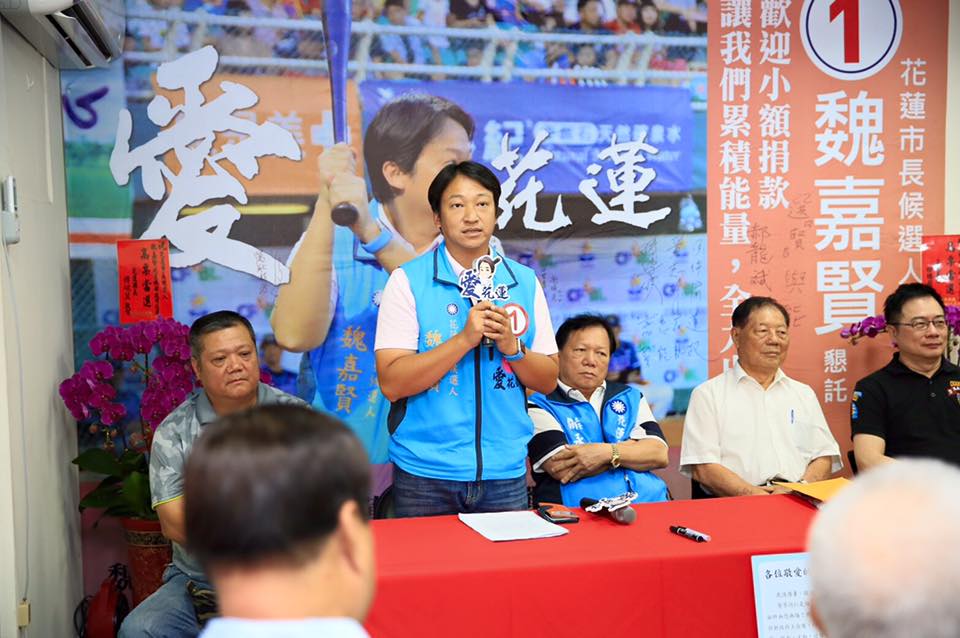 In particular, Wei Chia-hsien, who is an incumbent Hualien County councillor, is from a political family which has been accused of vote buying and corruption as well as connections to organized crime in the past. These include connections to the extreme pro-unification China Unification Promotion Party started by former gangster “White Wolf” Chang An-Le, who committed killings of political dissidents during the martial law period for the KMT. Indeed, Chang made an appearance with members of the China Unification Promotion Party in support of Wei during his campaigning.

Wei’s father, Wei Donghe, is a longtime acquaintance of Chang and, likewise, is another individual with a checkered political past with the KMT. Himself a political candidate of the KMT in several past runs for the Legislative Yuan in Hualien, Wei Donghe was sentenced to two years and ten months imprisonment in 1998 for vote buying in his 1992 run for legislature. Wei Donghe’s brother, Wei Mucun, also received a yearlong sentence for involvement in this. After being released from prison on parole, in 2004 Wei Donghe would make an appearance in court at the request of the Criminal Investigation Bureau of the National Police Administration in connection with a case of armed extortion at gunpoint, further suggesting ties to organized crime by the Wei family for its critics.

This deeper background of the Wei was largely forgotten by much of Taiwanese media until Tuan Yi-kang, who seems to hold particular ire against the Wei family, raised these past cases on social media. Tuan compared past cases of vote buying by the Wei family to the Zhongli Incident, a crucial event of the martial law era involving outrage against KMT vote buying. Nevertheless, despite the murky family background of its candidate in Hualien mayoral elections, this has not actually prevented accusations by the KMT that the DPP has unfairly used its current status as the ruling party of Taiwan to interfere in elections by drawing on government resources, and that the DPP may be behind apparent attempts to sabotage the Wei campaign. 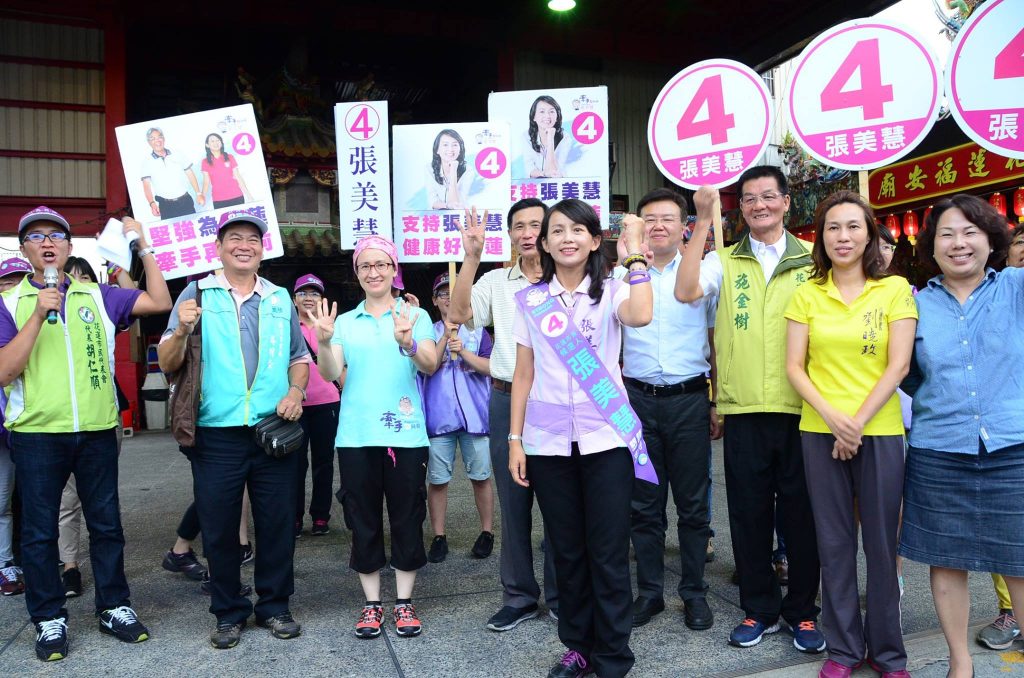 On the other side of the political aisle, Chang also ran a campaign which utilized family ties by playing up her connections with her husband. This included campaigning on the streets of Hualien, bizarrely enough, with a balloon mascot in the image of her deceased husband. But part of the reason why the defeat of Chang would provoke such shock and outrage was because as the first major election to take place since the inauguration of Tsai Ing-Wen as president of Taiwan, some have seen the mayoral race as a referendum on Tsai Ing-Wen’s first one hundred days in office. Certainly, the KMT had attempted to depict the race as such during campaigning, with KMT chairperson Hung Hsiu-Chu emphasizing the importance of the city to the KMT shortly before elections by moving a Central Standing Committee meeting to Hualien which included in attendance major party figures as Wang Jinpyng, Jason Hu, Hau Lung-bin, and Chan Chi-hsien. In turn, the DPP dispatched Taichung mayor Lin Chia-Lung and Taoyuan Cheng Wen-tsan to campaign for Chang.

But after Wei’s victory, the KMT has seized on the occasion to further claim that this represents declining support for Tsai and the DPP by the Taiwanese electorate, as part of attempts to further erode at Tsai’s approval ratings. In particular, the KMT has tried to claim that this defeat is a product of Hualien voters being upset because of declining Chinese tourist numbers to Hualien as a product of Tsai’s cross-straits policy, damaging the local economy. The KMT portrays this as ultimately returning to Tsai Ing-Wen’s unwillingness to acknowledge the 1992 Consensus as the foundation for cross-strait relations between Taiwan and China. Stirring up much online discussion, a red banner claiming that the people of Hualien will vote against Tsai Ing-Wen on August 27th was placed on top of a campaign banner for Chang Mei-hui immediately prior to elections, though it was popularly suspected this was an action of the Wei campaign and not Hualien residents.

Yet despite the shock of the DPP as to Chang Mei-hui’s defeat, perhaps we need not be so surprised at Wei’s victory—or, though not impossible, even resort to explanations that KMT vote buying was responsible for Chang’s loss. Hualien is traditionally pan-Blue territory. 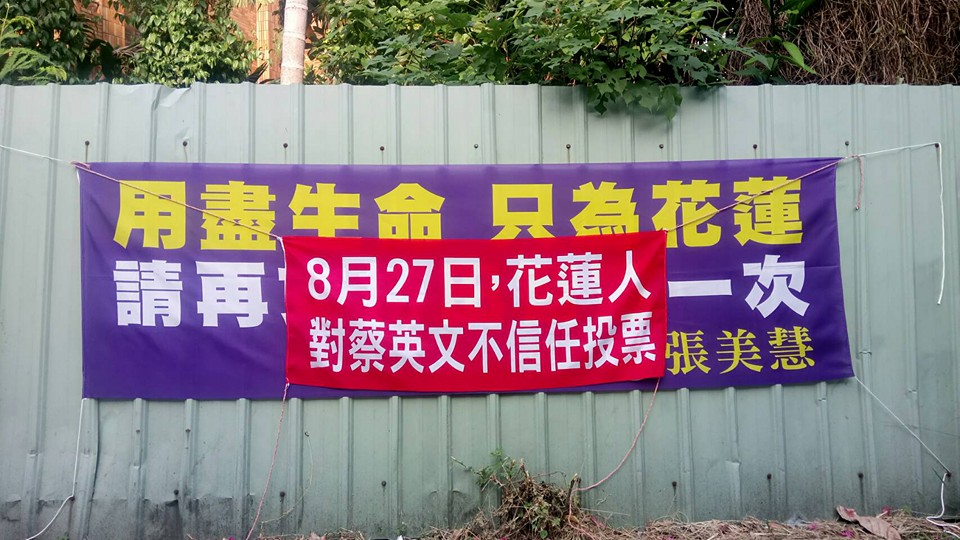 A red banner claiming that the people of Hualien will vote against Tsai Ing-Wen on August 27th appeared in Hualien in late August, placed on top of a campaign banner for Chang Mei-hui. Photo credit: Chang Mei-hui Facebook

In general, when an electoral district in Taiwan reverts from blue to green control it tends to stay that way, this being a product of shifts in Taiwanese identity in the past decades. But this is not always absolutely true in all cases. And recent inroads by the DPP into Hualien may not represent as large a shift in the voting trends of traditionally pan-Blue territories as as previously thought by many. The victory of Tien Chih-hsuan by such large margins in previous mayoral elections as well as the victory of Hsiao Bi-khim in 2016 legislative elections may be extraordinary, outlier incidents, rather than genuinely marking that the DPP had begun to make good on converting traditionally pan-Blue territory into pan-Green territory—this despite the temptation of pan-Green media to try and paint the overwhelming victory of the DPP in 2016 presidential and legislative elections as representing a paradigm shift for all of Taiwan.

Though it seems quite unlikely that the Hualien mayoral election can actually be seen as a broader referendum on Tsai Ing-Wen’s first 100 days in office, it remains to be seen if the KMT will be successful in portraying the results of the Hualien mayoral election as representing backlash against Tsai. But, nonetheless, rather than attribute the DPP’s defeat in Hualien mayoral elections to vote buying by the KMT or blame Hualien voters themselves, it should perhaps be that the pan-Green camp takes stock of its defeat in Hualien to realize that while it may have unexpectedly won in traditionally pan-Blue territories during 2016 elections, the DPP’s grasp upon these locations may be far more tenuous than wishful thinking would have it. And so much work remains to be done at the grassroots level in terms of weeding out the KMT in traditionally pan-Blue territories across Taiwan. That should perhaps be the lesson to take away from all this.