29 DOMESTIC CASES and three imported cases were announced by the Central Epidemic Command Center (CECC) at its daily press conference today. Seven of the cases that were found were already in quarantine. Four deaths were announced. There were fourteen cases in Taipei, eleven cases in New Taipei, two cases in Taoyuan, and one case each in Yilan and Changhua. 85.9% of cases to date have been released from quarantine.

According to the Ministry of Health and Welfare Chen Shih-chung, trends are still headed in a good direction. Though today’s cases are higher, Chen stated that a one-day uptick would not affect overall evaluations of the current level three alert status. Spread among families seems to be relatively high among current cases. 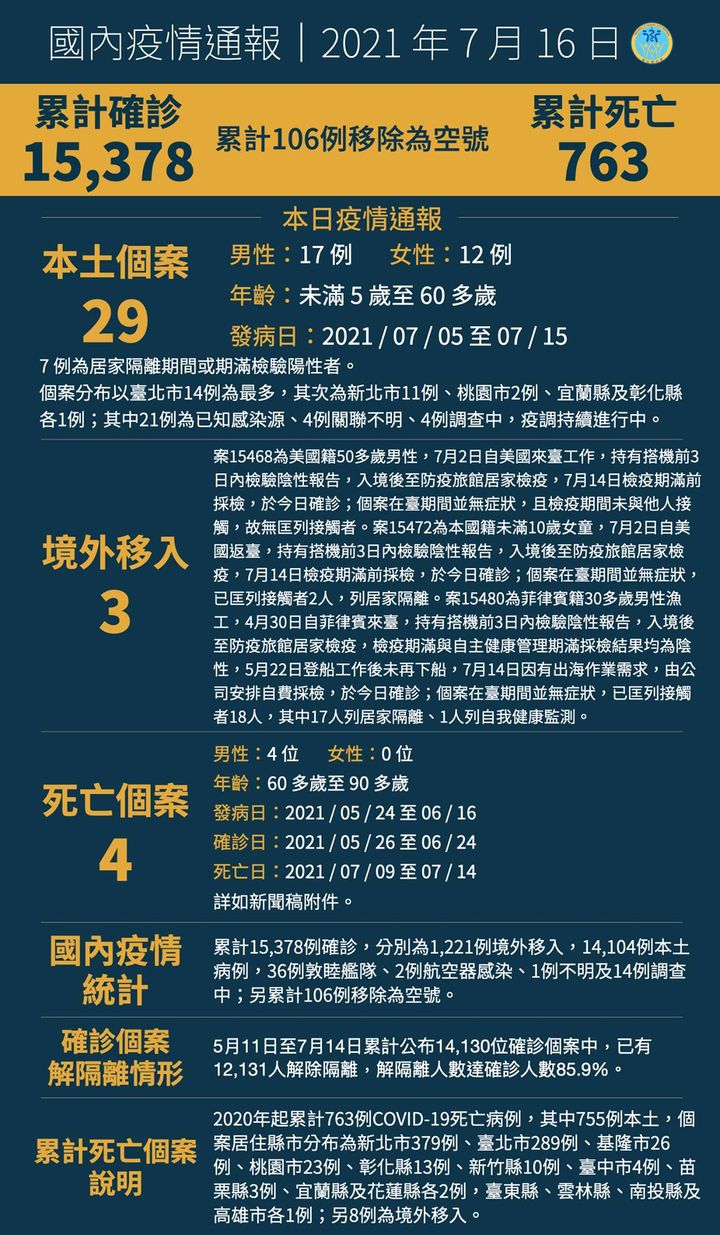 Seven of the imported cases this week have been found to be of the Delta variant. All cases were detected while in quarantine and are mostly light or asymptomatic, though one case is on antibody medications. One of the imported cases was vaccinated already but became infected before the vaccine took effect.

Myanmar is now listed as a high-risk country, starting on July 18th. Measures for individuals traveling from high-risk countries, such as being put into quarantine facilities, will be implemented. When asked if the government will arrange a charter flight for Taiwanese in Myanmar to return, given the political unrest there and the COVID-19 situation, Chen stated that this was a matter for the Ministry of Foreign Affairs.

242,274 were vaccinated yesterday. 16.1% of the population is covered in terms of vaccination, while 19.6% have at least one dose. As the time between vaccination has been extended from eight weeks to between ten and twelve weeks, this may slow down the process for checking if people have been vaccinated.

Namely, there are increasing reports of individuals hiding that they have been vaccinated in order to be vaccinated with mixed vaccines. The latest case in question is a taxi driver in Taipei that works at the Songshan Airport. Information has circulated online on how to trick medical personnel to hide vaccination history. The CECC will evaluate if there is a way to simplify the process for checking if individuals have been vaccinated before.

If Emergency Use Authorization is passed for domestically-manufactured vaccines, they will be included in the vaccines that individuals can choose. BioNTech vaccines purchased by TSMC, FoxConn, or Tzu Chi, which would be a total of 15 million vaccines, will be included in vaccine choices when they arrive. This is expected to be in September at the earliest. The CECC otherwise stressed that signing contracts with TSMC and FoxConn went smoothly, though some may have hoped for this to fail.

News media have begun reporting on the case of a 65-year-old man that died after being vaccinated in Kaohsiung.

DPP city councilor Liang Wen-jie stated in public comments that he did not believe that FoxConn would have been able to purchase vaccines without the DPP asking TSMC to become involved in vaccine purchases. Notably, FoxConn CEO Terry Gou and the DPP differ in their narratives regarding the vaccine purchase, with the DPP claiming that it took the initiative in the vaccine purchase while FoxConn alleges that it was primarily responsible for the vaccine purchases. According to the Liberty Times, Fosun made 2.3 billion NT on the sale of BioNTech vaccines to Taiwan. 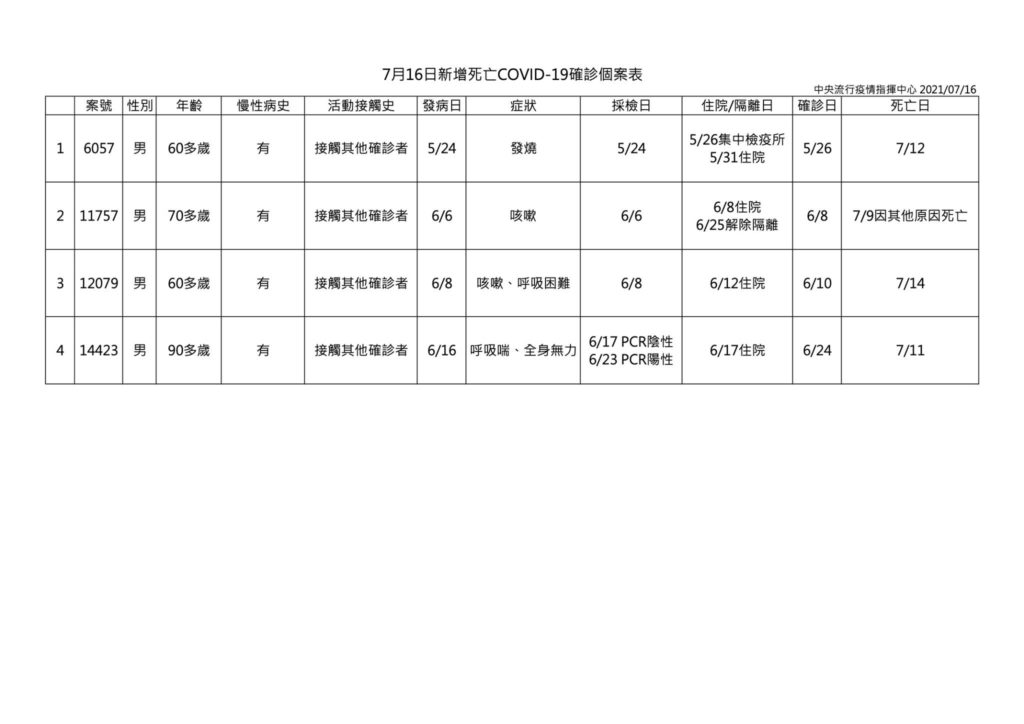 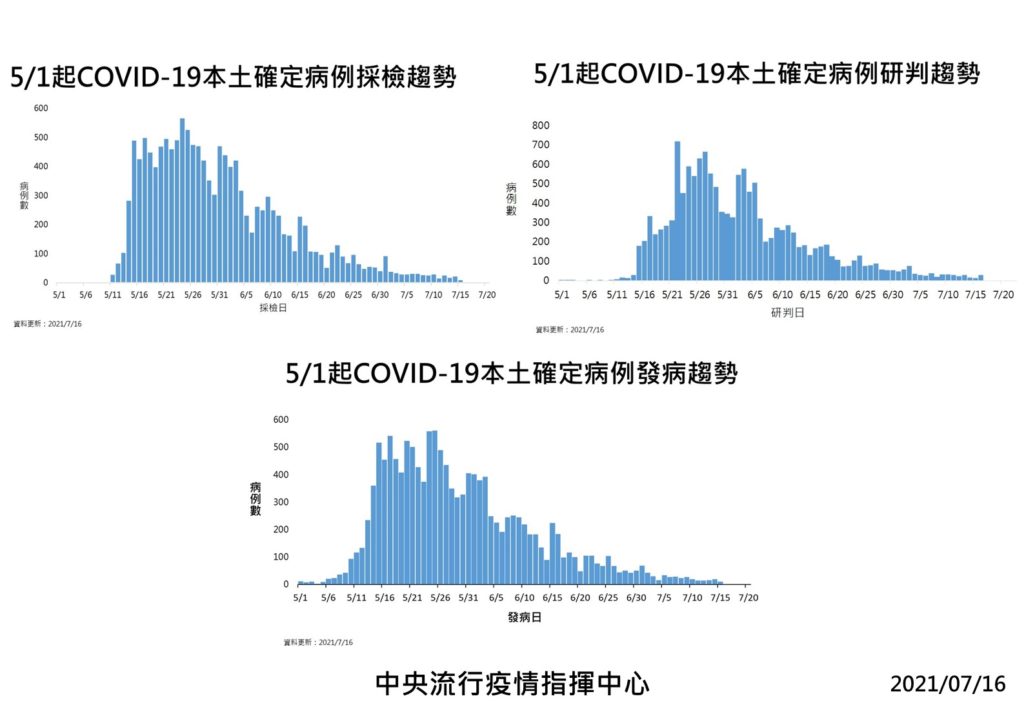 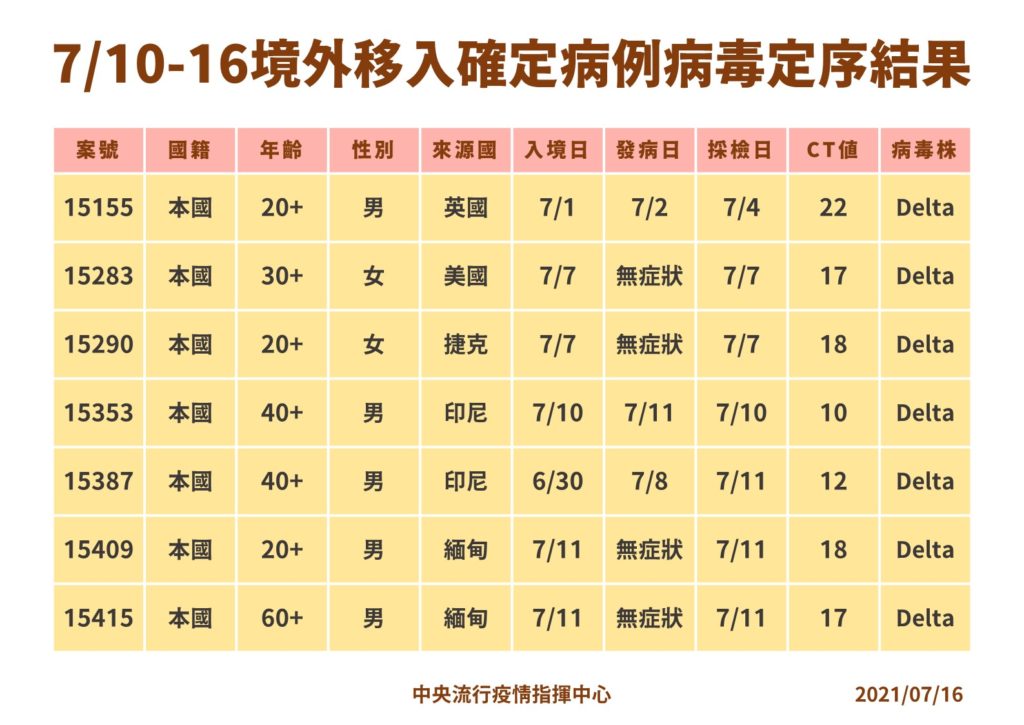 Information on the deaths from today (left), further data released by the CECC (center), and the imported cases from today (right). Photo credit: Ministry of Health and Welfare/Facebook

According to New Taipei officials, four of the cases today were from the workplace, two were from family gatherings, one from a hospital, one had other causes, and three under investigation. New Taipei called on the central government to clear up fears about the AstraZeneca vaccine, due to public fears, though one notes that New Taipei citing this gives such fears credence.

Taipei mayor Ko Wen-je stated that the public should focus on weekly trends, not one-day upticks in Taipei’s press conference today on the COVID-19 outlook. Ko stated that quarantine measures at hotels would be strengthened due to Delta variant cases and called on the public to get vaccinated with AstraZeneca, rather than overthinking things and hoping for Moderna vaccines. To this extent, Ko mentioned that Taipei had dropped plans to purchase vaccines after seeing the difficulties experienced by FoxConn and TSMC in purchasing vaccines. Although KMT local governments in central and southern Taiwan have suggested that they are interested in purchasing vaccines on their own, that Taipei, Taichung, and New Taipei is notable.

1,201 tests at vaccine sites yesterday found four cases. Through testing at the “K” section of the Taipei Main underground mall, this was how the cases detected there were found. A previous case in the “Z” section was unrelated.

The Carrefour in Neihu has been closed for disinfection after a COVID-19 case visited on July 10th and July 11th. The case in question visited not only the Carrefour but the Costco next to it, as well as the PXMart in Ximending, where they worked. The Eslite in Taipei Main Station has been closed because two people that work in the underground mall there have become infected with COVID-19, making three cases to date during the pandemic that work in the mall.

Testing of 1,675 at the Huannan Market has found three positive cases. Such testing was conducted as part of follow-up testing at the market.

Testing of sewage occurs every two weeks, starting from June 1st. So far, this has been negative.

Slovakia has pledged to donate 10,000 vaccine doses to Taiwan, following Lithuania announcing that it would donate 20,000 vaccines to Taiwan last month. Slovakia stated that this was to thank Taiwan for donating 700,000 masks earlier on the outbreak, though this is likely also aimed at diplomatic signaling. The CECC thanked Slovakia for its vaccine donation today.

Taiwan has been added to the UK’s quarantine-free “green” travel list.

Fully vaccinated Olympics athletes will undergo strengthened self-health management for 14 days once they return from Tokyo.

According to Chen Ping-hei, an academic at Academia Sinica, Taiwan currently has the lowest Rt value in all of Asia.

Information released by the CECC to clear up claims about vaccines changing DNA. Photo credit: 1922/Facebook

With reports of a COVID-19 case among a participant in the Medigen vaccine trial, whether this person was vaccinated with a placebo or the vaccine is still unknown and will not be known until the unblinding of the trial, though Medigen will consider ethical considerations with regards to COVID-19 cases among trial participants. Former vIce president Chen Chien-jen was among those to participate in the trial and has been notified that he was given a placebo.

Even if the CECC is purchasing vaccines from abroad, the CECC stressed today that building up domestic capacity is necessary for the future, as well as that not all vaccine purchases are successful.

Medigen continues to deal with unsubstantiated claims on social media claiming that its vaccines, which are undergoing phase three testing, are ineffective. One Facebook page in question, 不演了新聞台, has become a particular source of unverified claims.