57 Domestic Cases Announced, Along with 41 New Cases at Huannan Market in Wanhua

57 DOMESTIC CASES and one imported case were reported at the Central Epidemic Command Center’s daily press conference today. However, there has been a sudden explosion of cases at the Huannan Market in Wanhua, with 41 cases reported after over 7,000 were tested, bringing the total number of cases linked to the market to 107. These were not included in today’s daily count, though contact tracing was scheduled to be completed by 5 PM.

There were 29 cases in Taipei, 15 cases in New Taipei. Otherwise, there were four cases in Hsinchu County, three cases each in Taoyuan and Keelung, two cases in Taichung, and one case in Hsinchu City. 76.1% of to date cases have been released from quarantine. 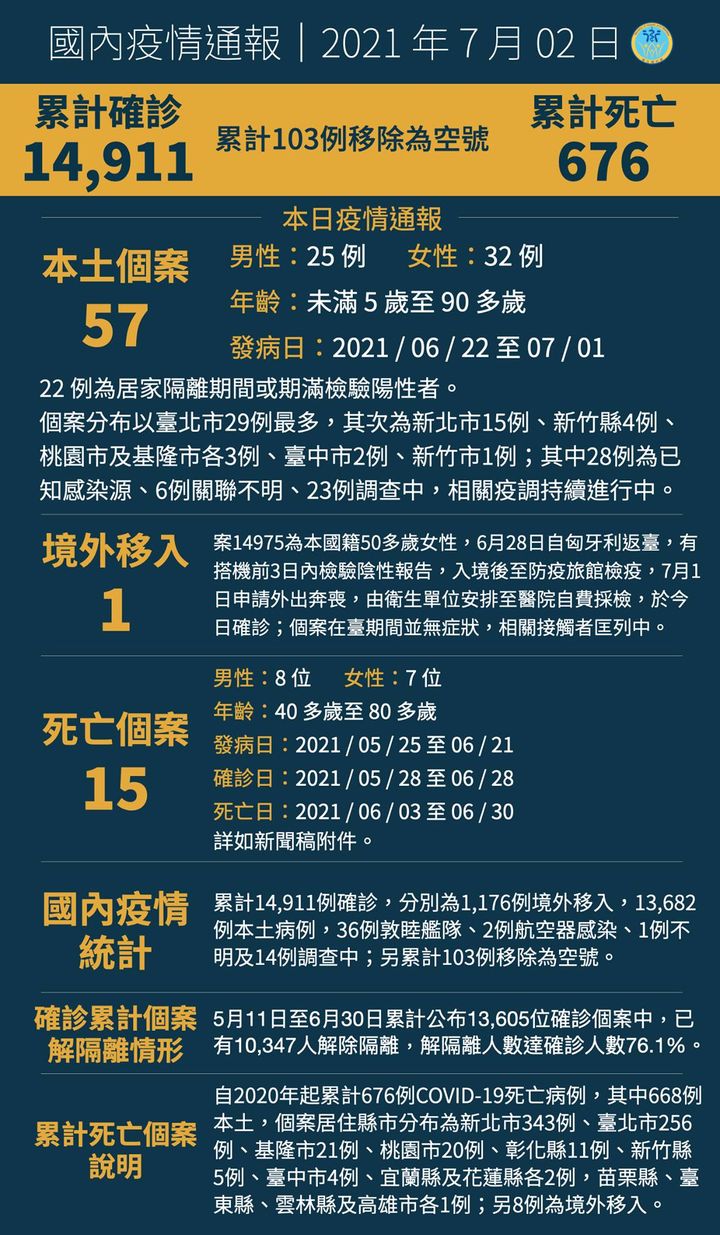 In particular, the Huannan Market cluster is likely to lead to backlash against Taipei mayor Ko Wen-je, who originally downplayed the cluster at TAPMC and the Huannan Market and was accused of not testing vendors at TAPMC because of plans to try and vaccinate them. Many of the new cases are thought to have been vaccinated.

Yesterday, 73 vendors were placed into quarantine because of being on the same bus as a confirmed COVID-19 case while on the way to be vaccinated. Legislator Freddy Lim has also been critical of the fact that despite Wanhua being the start of the outbreak, it has only received 1270 doses and 274 bottles of vaccines, the lowest of Taipei’s twelve districts. By contrast, Daan has received 9,280 doses and 750 bottles, with the most vaccines.

Ko has also been criticized about the fact that the director of the Taipei Department of Health (DOH), Huang Shi-jie, is currently on month-long leave despite the outbreak, meaning that Taipei’s DOH is operating with no leadership currently. Huang previously offered to resign to take responsibility for the violations of vaccine order at Taipei clinics, but Ko turned this down, stating that he was needed during the pandemic. Ko has been criticized since in spite of stating this, Huang is still not at work. When questioned by city councilor Miao Poya Taipei city council today, Huang stated that Taipei deputy mayor Huang Shan-shan had told him to take the month off.

A joint command center will be set up between Taipei and the CECC, with the CECC stressing that it has authority but that it hopes to cooperate with Taipei. Text messages will be sent to individuals who were in the vicinity of the market between June 8th and July 1st.

Taipei was criticized as refusing to cooperate with the CECC regarding the TAPMC and Huannan Market clusters in the past, including claiming that the incident was not as severe as the CECC claimed, and claiming that it would rather vaccinate market workers than test and quarantine them. Two weeks ago, Taipei deputy mayor Huang Shan-shan stated that she was refusing to take calls from Chen Shih-chung.

Yet Ko’s vaccination plan is thought to have led to public gatherings that spread COVID-19, as seen in 73 vendors needing to be quarantined because of being on the same bus as a COVID-19 case while on the way to being vaccinated. Likewise, many of the new infected are thought to have been vaccinated, but vaccines only take effect two weeks after vaccination and are a preventative, not a treatment measure for COVID-19. Ko seemed to announce the measure to try and upstage the central government.

The situation seems to be stable in Pingtung, with no new cases reported today. All hospital staff at the Fangliao Hospital in Pingtung have been tested, with 490 quarantined in connection with the hospital cluster. There were 402 negative cases and 88 tests still being processed. Up to June 30th, all tests from neighborhood testing sites were negative. 10,689 cases in eight days led to one positive test, with 340 tests being processed. The rate of infection remains low in Pingtung, despite expanded testing.

Two cases focused on at the CECC press conference today were of foreigners. A migrant worker caretaker that died in a Changhua fire at a quarantine hotel, killing four and injuring 22, was found to be positive for COVID-19 after death. An Irish man that suddenly dropped dead while jogging in Wanhua had issues with blood pressure, but it is still unclear whether his death was linked to COVID-19. 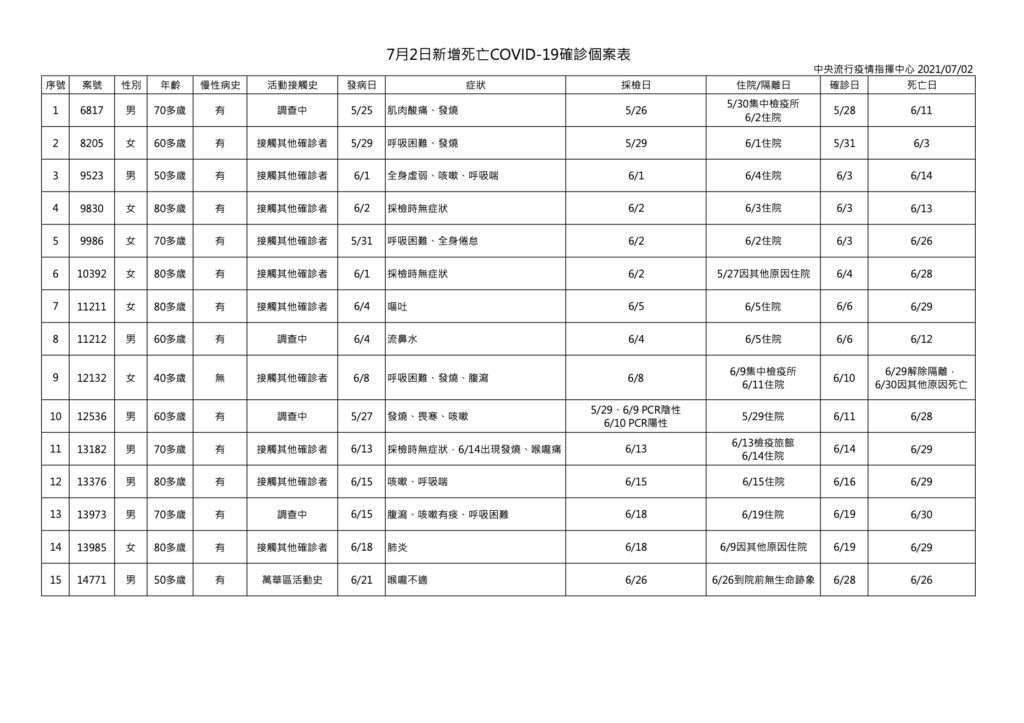 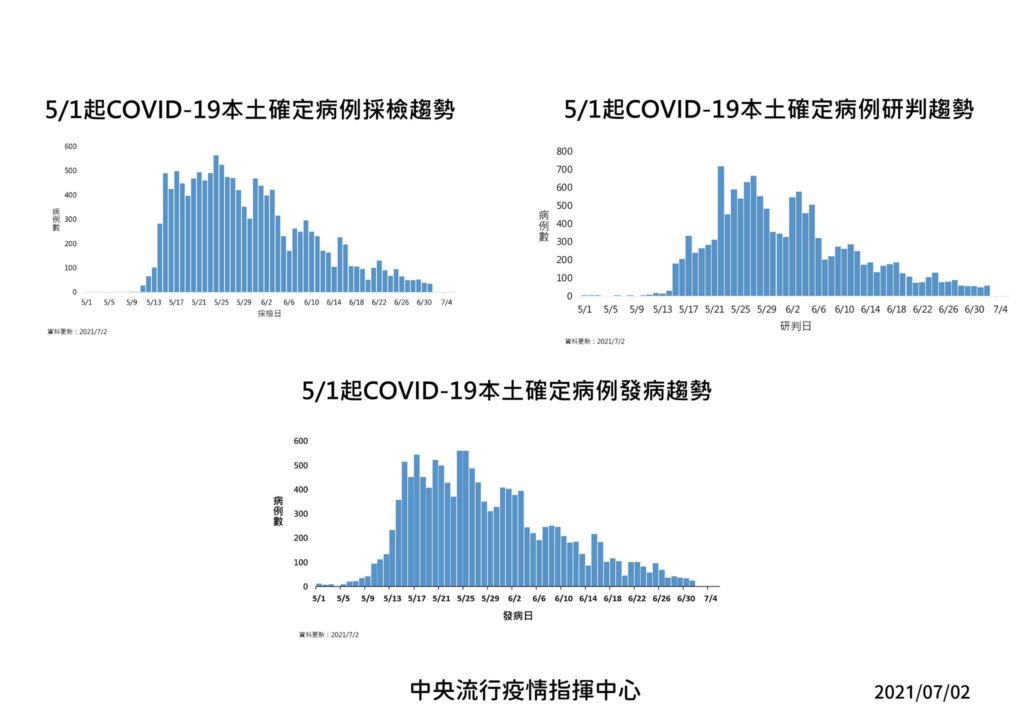 NTU Hospital is making rolling adjustments to internal policy due to limited negative pressure capacity wards, though this has led to some criticisms due to that this leads to contacts with medical staff that lead to infections and a need to quarantine.

The NPP has urged the rescheduling of national referendums, which were originally to take place in August, in order to avoid public gatherings that could lead to the spread of COVID-19.

Ko Wen-je opened his press conference today by stressing the overall declining cases, while defending himself by stating that it is harder to detect transmission chains in the late stages of the pandemic. Most testing in connection with the cluster is complete, but 1,800 are to be tested today and tomorrow. These are primarily vendors less directly linked to the market, which is why this will take more time.

Ko similarly defended testing as having been ongoing at TAPMC and the Huannan Market. As more than 10,000 pass through the market daily and the structure of the Huannan Market is complex, between personnel and workers, Ko stated that this is why it was more difficult to test the market and that he believed the cluster was due to undetected transmission chains in the neighborhood.

Four of the Huannan Market cases had previously tested positive for COVID-19, as a result of which they were unlikely to be contagious. However, Ko also stated that more individuals working in the vicinity of the market were infected compared to individuals working in the market, which may be concerning regarding transmission chains in the neighborhood. Ko stated that most cases were asymptomatic and they were relatively young. Neighborhood testing sites will be set up to try and detect transmission chains. Ko expressed that there were difficulties with contact tracing because most of the infected have household registrations in New Taipei, so he hoped for greater cooperation with New Taipei.

Moreover, Ko stated that he had hoped to vaccinate market vendors because he felt PCR testing was too expensive, citing the cost of the 10,000 tests that will need to be conducted these three days. Ko stated that vaccination policy will need to be amended to prioritize the elderly, as well as individuals with high numbers of contacts—although this is what vaccination policy has been for months.

New Taipei mayor Hou You-yi stated that with the one-day uptick in cases, there should still be focus on overall trends. According to Hou, 13 of the Huannan Market cases are from New Taipei, which may not mesh with Ko’s statements. With plans to vaccinate market vendors as part of category seven, the New Taipei government has drawn up a list of 15,000 individuals to be vaccinated but is waiting for the approval of the CECC.

When asked if Taipei mayor Ko Wen-je should be blamed for the outbreak at the Huannan Market, Hou stated that “We are all family”. Like Chen Shih-chung, Hou kept to the high moral ground in stressing cooperation with Taipei.

Hou also thanked the CECC for listening to local governments in expanding testing policy for arrivals to Taiwan.

Namely, testing of all inbound travelers before they enter quarantine began today. Plans for testing are to be drawn up daily based on the number of inbound travelers. The CECC previously only hoped to test arrivals before they were released from quarantine, with only individuals arriving from high-risk countries needing to undergo testing before entering quarantine. The CECC stated that it feared testing all travelers would lead to unnecessary contacts, such as putting healthy people in the same space as COVID-positive individuals for testing. But in the face of criticisms from the heads of local governments including Taoyuan, New Taipei, and Kaohsiung, it backed down from the policy and announced general testing for all inbound travelers.

Novavax has confirmed that Taiwan has placed an order with it. This refutes claims that Taiwan has not ordered Novavax, an accusation levelled at the CECC to claim inaction with regard to vaccine purchases. Reports in international media indicate that distribution through the COVAX platform is slow, with only four countries in Southeast Asia having received vaccines. Chen Shih-chung did not reveal any new details about attempts to purchase vaccines through COVAX or from Novavax today, though Chen stated Taiwan was directly in communication with Novavax.

Pan-blue local governments have stated that they are hoping to purchase vaccines. The CECC has requested documentation from them regarding vaccine purchases.

It is an open question whether the new cases will lead to an extension of the current level three alert. The CECC has stated that it is evaluating the situation and has not made a decision. Though the CECC previously asserted that it may relax measures for indoor dining and how to resume some aspects of everyday life while at the same time being able to address new clusters that emerged, the CECC stated that it will only announce this when the situation is more stable. 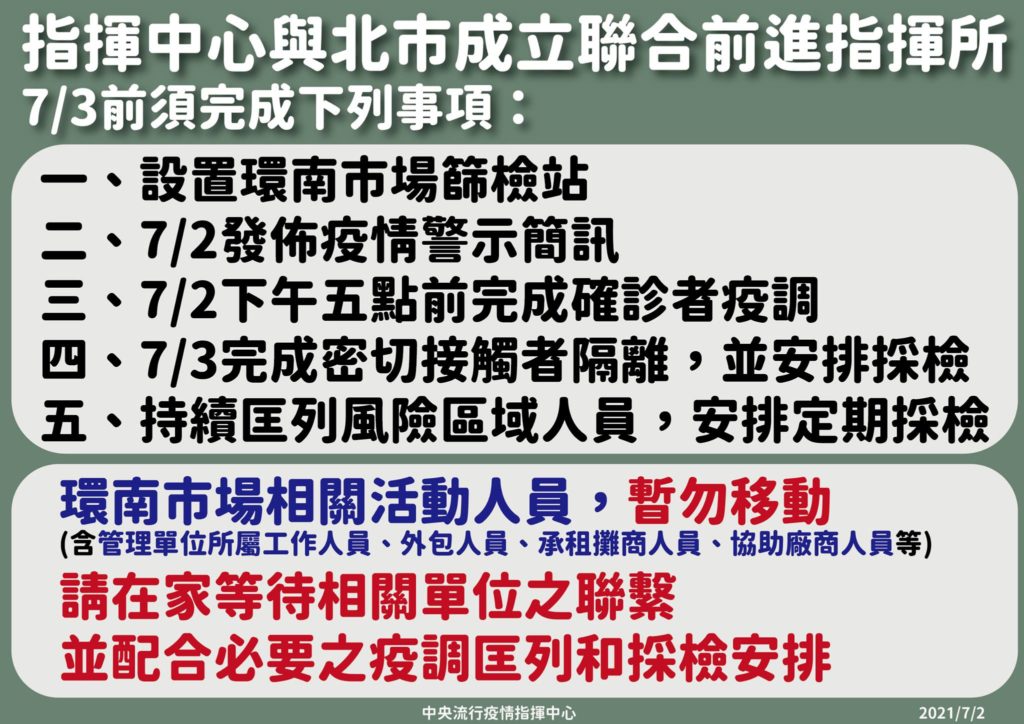 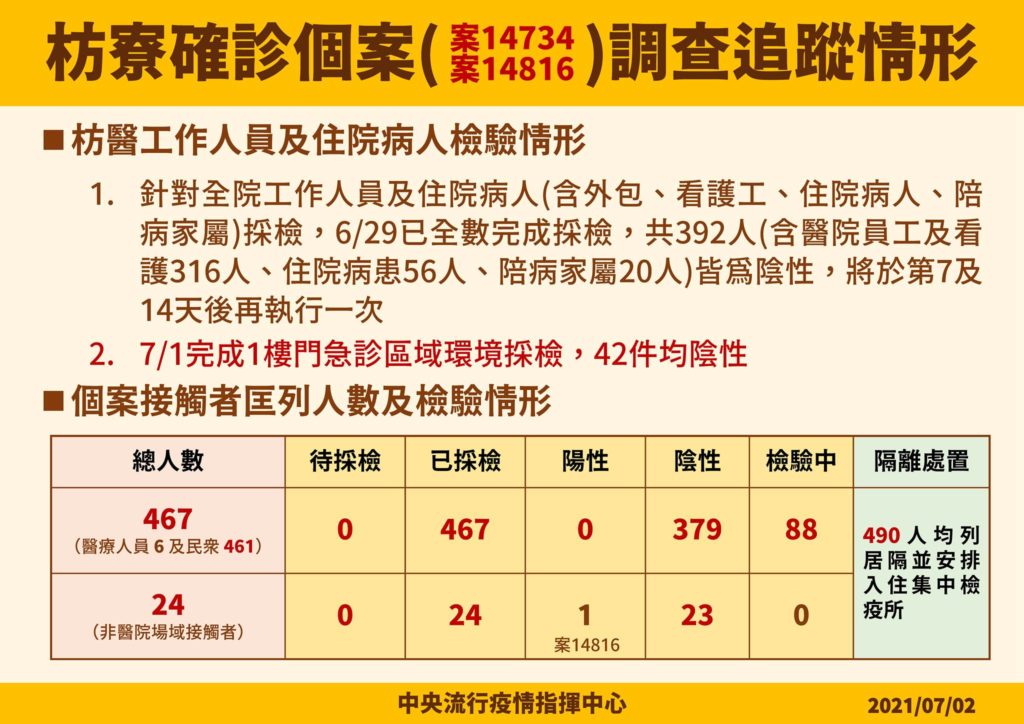 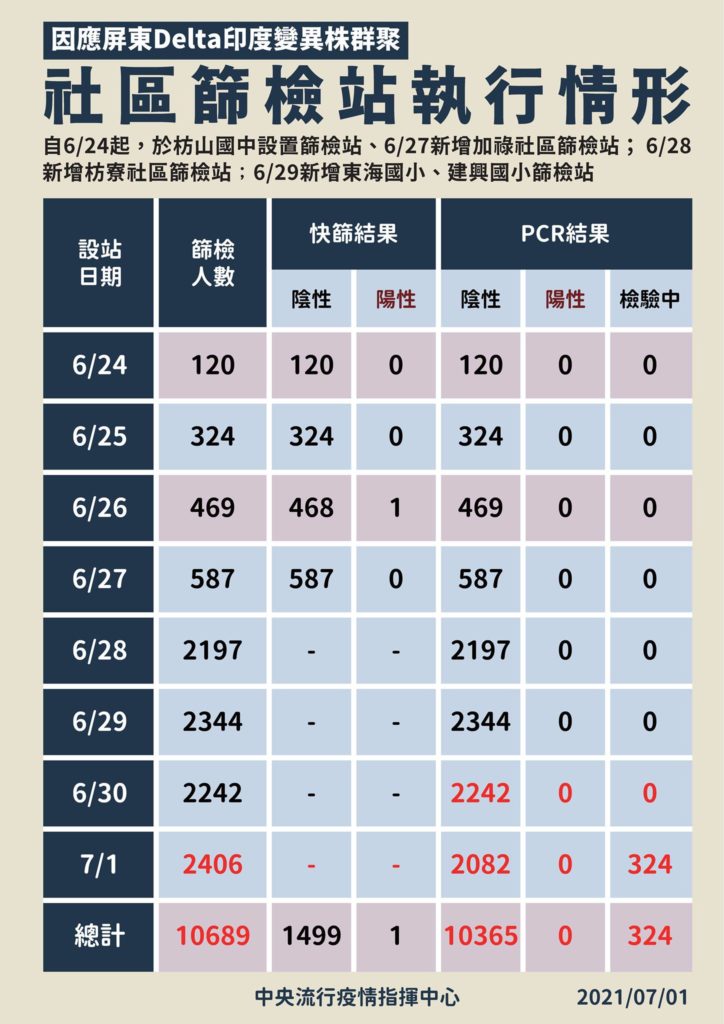 The Central Election Commission (CEC) has announced that the national referendum originally scheduled to be held on August 28th will be delayed to December 18th due to the COVID-19 situation. Televised debates will be held between November 13th and December 11th.

A referendum vote against Taiwan Statebuilding Party legislator Chen Po-wei has been approved, which has been set to take place on August 28th due to laws requiring referendums to be held between 20 and 60 days from when they are approved. Nevertheless, a meeting will be held on July 16th to decide if the date of this recall vote needs to be amended.

The CEC cited laws allowing for delays in holding a referendum in the event of a natural disaster, though there was previously discussion of whether laws would need to be amended to delay the referendum. It is to be seen if opposition parties such as the NPP or KMT attack the DPP for changing the date of the referendum in a “black box” manner lacking transparency. The CECC has urged 10% vaccination to take place before the referendum; even with the slowdown in vaccination in the past two weeks, this goal should not be difficult to meet. Vaccinations have now surpassed two million, with bus drivers expected to be included in the next wave of vaccination.