16 DOMESTIC CASES and two imported cases were announced at the Central Epidemic Command Center’s (CECC) daily press conference today. 14 of these cases were already in quarantine. No deaths were reported. There were seven cases in New Taipei, five cases in Taipei, two cases in Kaohsiung, and one case each in Taoyuan and Chiayi. Two cases have unclear sources of infection, while 88.9% of cases to date have been released from quarantine.

In the next round of vaccination, 1,034,993 people have made appointments to be vaccinated, which is 73.52% of the 1.38 million people eligible to be vaccinated in this round. Shipments for this round were distributed into two segments, with 500,000 vaccine doses distributed last week. But with more limited supply, this may lead to some gaps in vaccination schedules. 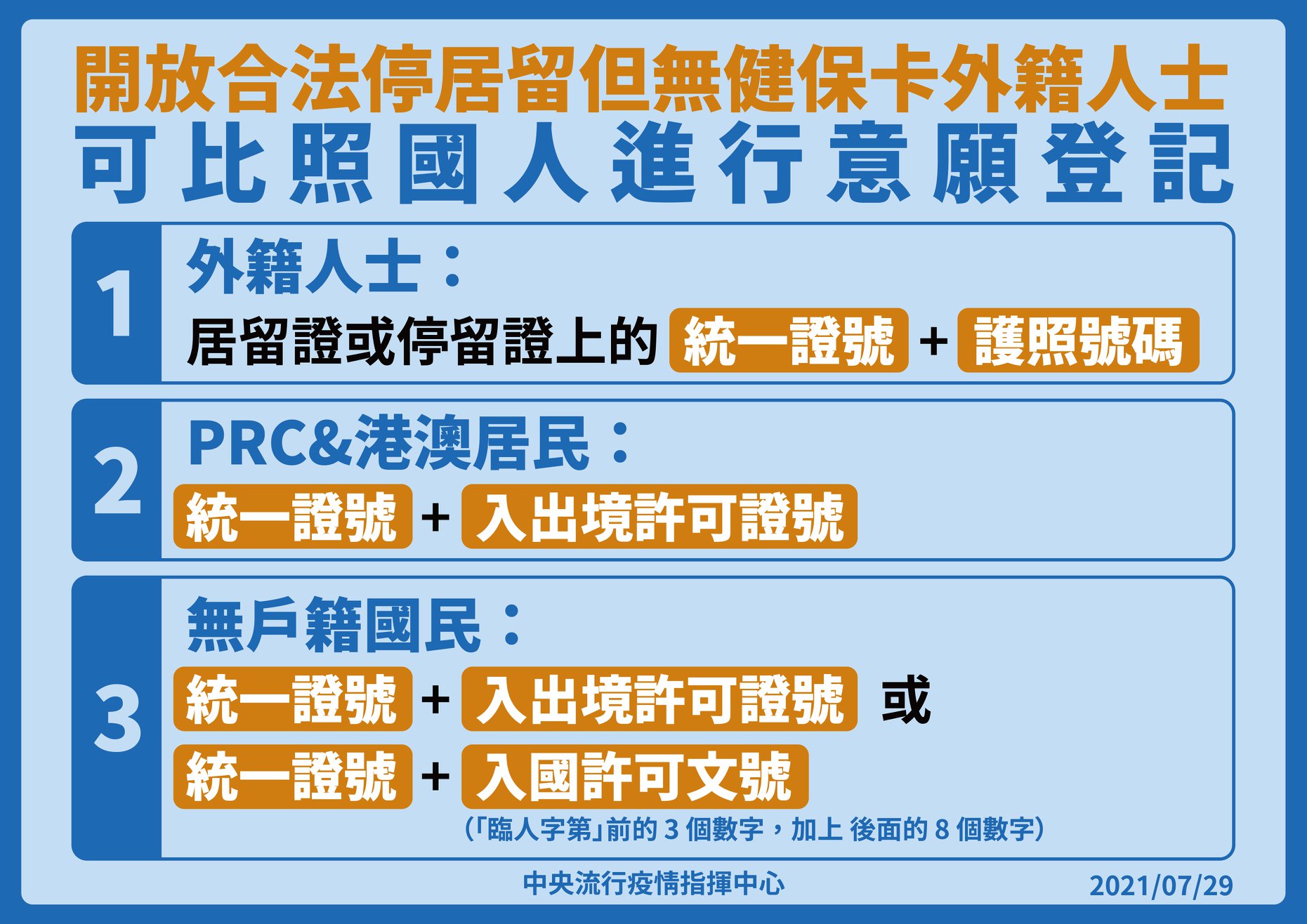 Information on changed documentation requirements for vaccination for foreigners, PRC nationals, individuals from Hong Kong or Macau, and nationals without household registration. Photo credit: Ministry of Health and Welfare/Facebook

New measures have been rolled out for foreigners without National Health Insurance to be vaccinated. Foreigners can be vaccinated using the ID number on visitor visas or ARCs plus their passport number. PRC nationals and individuals from Hong Kong or Macau require their ID number plus their Entry/Exit permits, which is also true of nationals without household registration, who need to provide their ID number, Entry/Exit permit, or the number of their entrance permit.

The CECC first needs to know how many people there are in these groups, because this is hard to calculate, and some may have been vaccinated outside of Taiwan already. Vaccination for such foreigners is expected to take place in the next round of vaccination on August 6th. The CECC is not aiming for zero cases, but if it can take place, it would be very happy.

The CECC will provide assistance for athletes returning from the Olympics. Some additional measures are required for individuals returning from the Olympics, as a special case, with seven days in a quarantine hotel before returning to Taiwan followed by fourteen days of strengthened self-health management once returning to Taiwan if vaccinated and fourteen days in quarantine hotel if unvaccinated. These measures would not be rolled out to others.

According to the Apple Daily, President Tsai Ing-wen is expected to be vaccinated with Medigen vaccines within the next two weeks.

Taiwan is researching vaccine passports, in order to ensure that they are internationally recognized. That being said, there is already proof of vaccination available domestically, consisting of the yellow card issued during vaccination. 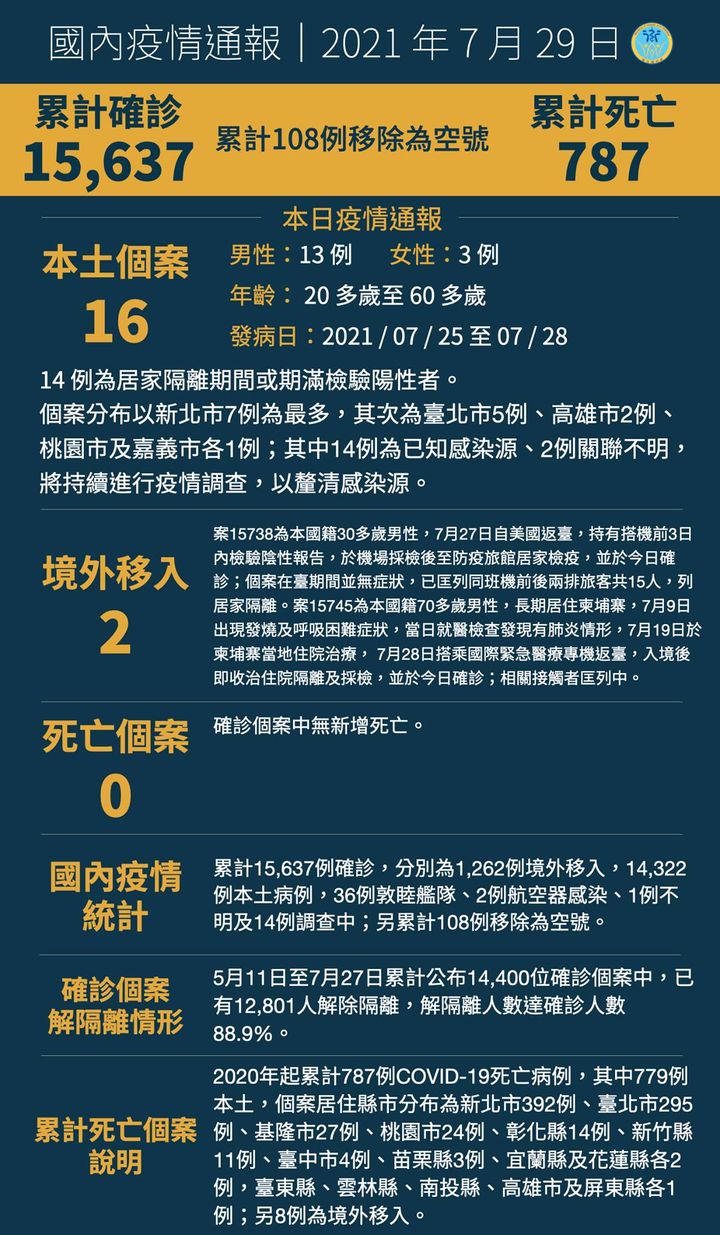 Vaccination is at 68% for those above 75, which is 75% for those between 64 and 75. Allowing vaccination without registration makes it harder to calculate ahead of time as to how many vaccines are needed, so this may also lead to some inconveniences if there are insufficient vaccines.

When new vaccines pass Emergency Use Authorization (EUA), they will be added to the online system. The CECC emphasized that review measures for vaccines in Taiwan are stringent according to international standards, so it cannot anticipate ahead of time whether vaccines will pass EUA or not.

When asked about reports of transportation workers who have not been vaccinated, the CECC stated that it would need more details on such individuals, such as whether they are frontline medical workers in need of vaccination.

Supermarkets, department stores, and wholesale stores in Taipei will no longer be restricting whether individuals are allowed into the premises based on whether their national ID number or ARC is even or odd, a measure aimed at controlling the number of people inside.

The New Taipei City Hospital’s Sanchong branch has begun allowing for vaccination without appointments for those between 50 and 64 years old. This is aimed at individuals unable to use computers, but there has been some criticism of the fact that this means such individuals will need to wait two-and-a-half hours in line before being vaccinated.

According to New Taipei officials, all six cases from today were found while in quarantine. Only one of these cases was in need as to the source of infection. For the second day in a row, the press conference was not led by mayor Hou You-yi, but by the deputy mayor. When asked about reports of a clinic that restricted use of vaccine leftovers to women and not men, New Taipei states that neither it nor the central government allow for this and that clinics violating such measures will have their rights to conduct vaccination stripped from them. Otherwise, New Taipei sought to attack the central government regarding vaccination policy, such as regarding the use of mixed vaccinations or access to Moderna vaccinations, claiming that the central government did not understand local conditions regarding lacking access to vaccines.

According to Taipei mayor Ko Wen-je, all five cases in Taipei today had clear sources of infection. Four were in long-term care institutions, which were found by testing the contacts of a previous case. Five out of six people found to be positive in connection to this long-term care institution had been vaccinated, as a result of which they did not have severe symptoms of COVID-19. Ko used this example to stress the efficacy of vaccines. Cases linked to this care institution will be PCR tested every three days while in quarantine. 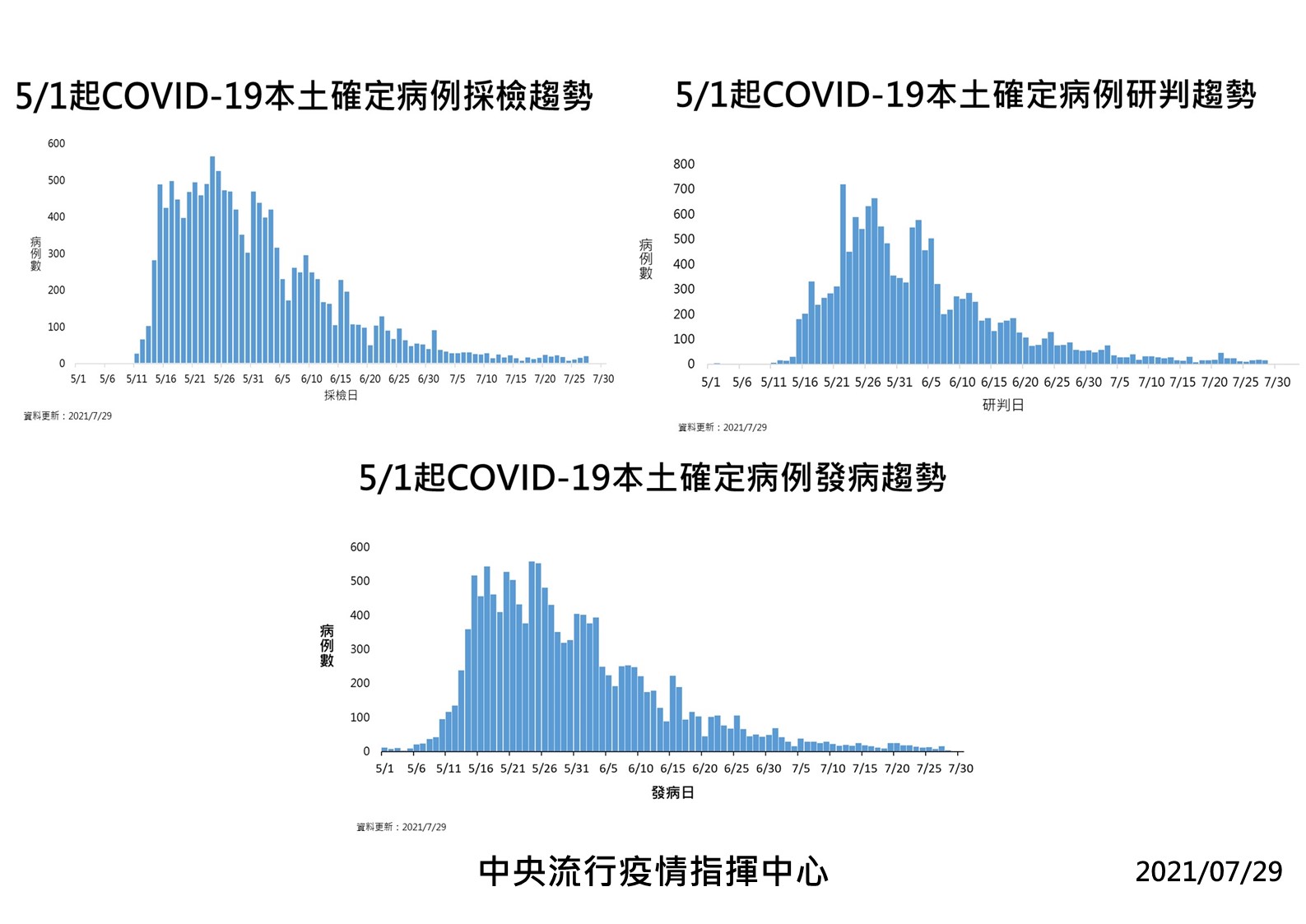 Ko also stated that Taipei will announce tomorrow whether to reopen indoor dining next week. Reopening of dining will only allow no more than fifty individuals indoors and no more than one hundred outdoors, Ko emphasizing that Taipei did not intend to open dining establishments all at once—that being said, most dining establishments in Taipei are not sufficiently large as to have more than fifty individuals. If there are COVID cases at such restaurants, they must be closed for three days and shift to take-out.

Ko was asked about attacks yesterday on members of the DPP that Ko claimed to advocate domestically manufactured vaccines but who had themselves been vaccinated with other vaccines. Specifically, Ko was asked if this was referring to Taiwanese independence activist Tsay Ting-kuei, who is not a DPP member, but called for use of domestic vaccines despite having been vaccinated with AstraZeneca in the US. Taipei city officials deflected and claimed this was referring to young members of the DPP that expressed support for domestically manufactured vaccines but could not be vaccinated with them, due to their not being available currently.