107 DOMESTIC CASES and 2 imported cases were announced by the Central Epidemic Command Center at its daily press conference today, for a total of 109 cases. New Taipei reported 44 cases, Taipei reported 31 cases, Taoyuan reported 17 cases, and Taichung reported six cases. Hsinchu County reported four cases, Miaoli reported three cases, and there was one case each in Yilan, Keelung, and Changhua. Cases occurred in nine cities/counties, which is up from seven yesterday.

11 deaths were reported. Nine of the deaths were above 60, one was in their 40s and the other was in their 50s, who had underlying conditions such as high blood pressure or were undergoing dialysis. The number of deaths is expected to decline, because this reflects earlier periods in the pandemic.

This is the lowest case number in a month, breaking a record set yesterday. Close to 60% of COVID-19 patients are out of quarantine now. 1,904 are currently hospitalized, which is a decline from the past days. 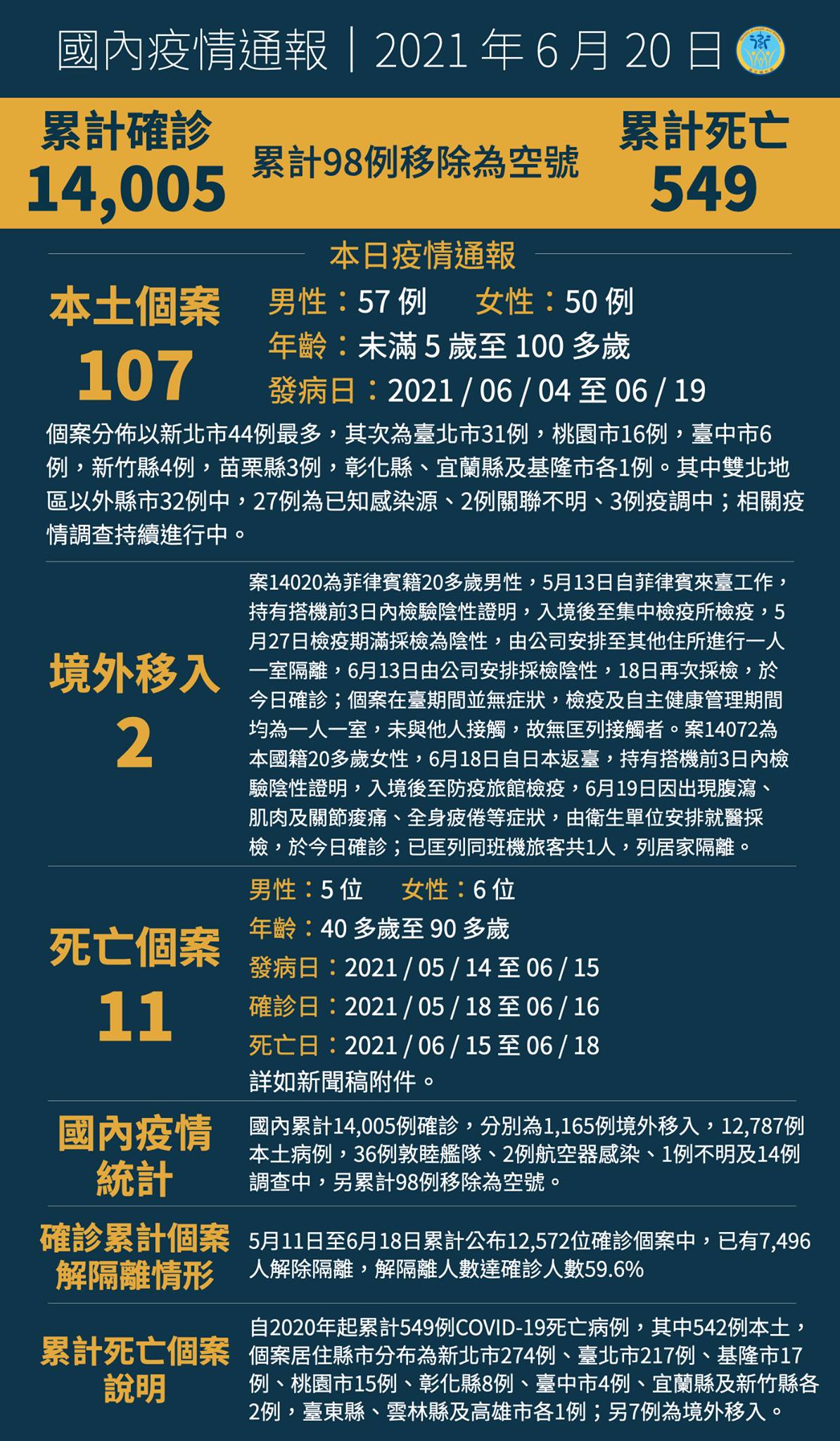 The media continues to report on deaths of elders after receiving AstraZeneca vaccines as though they were caused by the vaccine. Notably, the CECC has even been accused of attempting to cover up reactions to AstraZeneca, because of the fact that it does not report reactions to vaccines with its daily reports, and numerous reports circulate of apparent deaths or negative reactions. One of the latest news stories suggests blood clots caused by vaccines were reported with a patient in Taichung.

However, according to Chen, there has been a visible decrease in vaccinations because of these fears.

Still, the CECC has no plans to force anyone to take a specific vaccine, this is to be decided by patients in coordination with their doctors. The CECC is observing what other countries do with regard to the prospect of mixing different vaccine brands.

The Executive Yuan’s bailout plan for individuals affected by the outbreak, which provides loans of up to 100,000 NT, has temporarily been suspended because of too many people applying. More than one million have applied, though the program originally only was for up to 500,000 applicants. It is expected that the program may eventually be opened up again to the public, however.

The KMT has continued to attack the DPP over the lowering of quarantine periods for pilots to three days followed by eleven days of self-health management. KMT Johnny Chiang has continued to criticize the DPP for voting against releasing the minutes of the meeting where this was decided, although the DPP and other parties have already agreed to an investigation into the lowering of quarantine periods.

A patient at the Military Taoyuan General Hospital has tested positive for COVID-19, in addition to two nurses and a family member of one of the nurses, with a total of 11 having proved positive for COVID-19. Over 100 at the hospital have subsequently been tested for COVID-19. Some of the medical workers of the hospital were already vaccinated, but they only had one dose of vaccine, and so they were not fully protected. With vaccine fears on the rise, the CECC is likely wary of skepticism about the effectiveness of vaccines. 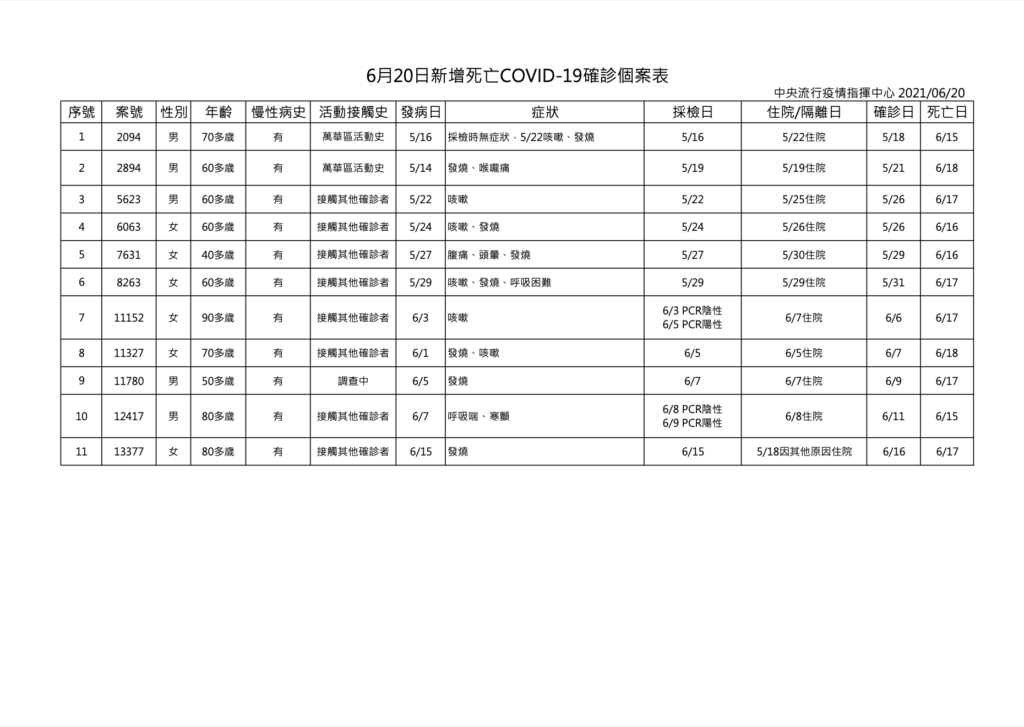 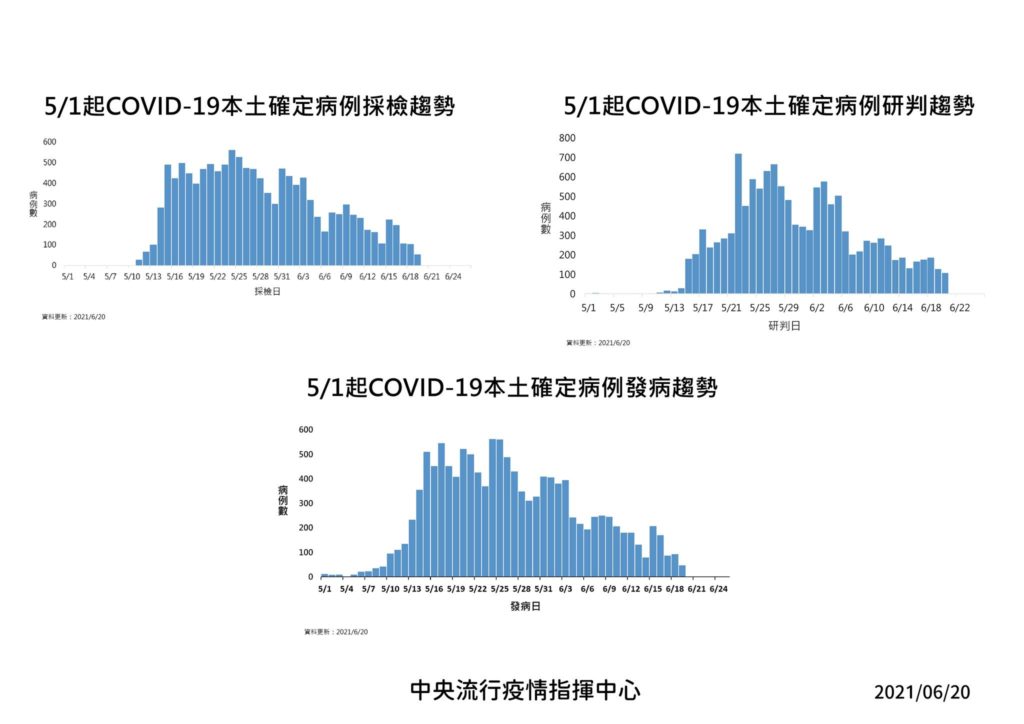 Information on the deaths announced today (left) and further data released by the CECC. Photo credit: Ministry of Health and Welfare/Facebook

TSMC has reported its plans for donating vaccines to the government to its board of directors. TSMC, along with FoxConn, intends to donate vaccines to Taiwan. Some believe that the Tsai administration requested TSMC to get involved in vaccine donations in order to avoid FoxConn being the only company that was involved in vaccine donations, given FoxConn’s pan-Blue leanings, and because of the difficulty that FoxConn would have criticizing TSMC, due to its paramount role in Taiwan’s economy.

DPP legislator Kao Chia-yu has come under scrutiny after Taipei mayor Ko Wen-je alleged that she had contacted the city government requesting vaccine allocation to one of the clinics in Taipei accused of violating the vaccine priority order. For her part, Kao stated that she only passed on a request from the head of the Dianthus Clinic, but there was no response from the Taipei city Department of Health apart from rapidly saying that there was “No problem” with the request. Apart from being criticized for voting in favor of the reduction of quarantine periods for pilots, Kao has also seen criticism from her own party, with Kaohsiung city councilor Kang Yu-sheng of the DPP among those to criticize her publicly.

According to New Taipei mayor Hou You-yi, the rate of infection in New Taipei is 1.3% at testing sites. Hou stated that under fifty cases in New Taipei represented progress, but that did not mean that measures should be slackened.

The CECC may begin to require tests for individuals being released from quarantine after they enter Taiwan.

In particular, the CECC was questioned about a case reported in the United Daily News involving Taichung police using the QR code contact tracing system to track down a suspect. The CECC stated that the Taichung police did not request information from the CECC, but requested text messaging information from the judicial system, and this happened to include QR codes used for contact tracing. Police then began visiting the locations listed on the QR codes to gather information about the suspect.

After the incident, the CECC has asked police not to use QR contact tracing information in investigations going forward. The CECC likely fears people hoping to avoid detection will not use the QR contact system, but this will create a hole in COVID-19 prevention measures.

2.5 million Moderna vaccines will arrive from the US this afternoon. This was a significant increase from the 750,000 vaccine doses that the US originally stated it would donate. It is a question as to whether the US increased the vaccine donation in order to counter the potential blow to America’s image in Taiwan, as a result of attacks by the KMT and other members of the pan-Blue camp that alleged that this amount was low. It is not clear if the 2.5 million will be taken out of the 7 million vaccines that the US announced it was donating to Asia or if the US will increase its vaccine donations to Asia, which would otherwise mean that over 1/3rd of the US vaccines allocated to Asia has gone to Taiwan.

The increase in the vaccine donation was done in a relatively quiet manner, with the American Institute in Taiwan, the de facto US embassy in Taiwan, being the first to make the announcement. This contrasts with the theatrics of sending a military transport plane with three elected US representatives to Taiwan to announce the initial 750,000 donation. It is to be seen if Tsai Ing-wen counts the vaccine donations towards the ten million vaccines that she stated would arrive by August, with Tsai having already surpassed her promise of two million vaccines by the end of June with vaccine donations from the US and Japan.

Notably, the announcement by the US about the donation cited Chinese interference in attempts by Taiwan to purchase vaccines as one of the reasons why the decision was made to send Taiwan more vaccines. As the Tsai administration has been criticized by the KMT over these allegations, with the KMT alleging that this is made up, this may give the Tsai administration more ammunition in domestic politics.

With the vaccines arriving today, this puts Taiwan around 5 million total vaccine doses, around what is necessary to fully vaccinate over 10% of Taiwan’s population. 6.4% of the population has been vaccinated so far.

When asked about 410,000 Moderna vaccines that were reported as arriving today, Chen Shih-chung stated that this was never announced by the CECC, but that this did not prevent the media from reporting on this as fact.

The CECC has applied for Novavax vaccines through the COVAX platform. Otherwise, the CECC is still aiming to vaccinate the elderly, along with medical workers. Individuals above 65 are an important group to be vaccinated when there are sufficient vaccines. Emergency Use Authorization may be passed for medical products that are expected to be put into use soon.

Many questions today at the CECC press conference, then, were about the question of when level three restrictions would be lifted. Taipei mayor Ko Wen-je has stated that he was considering lifting restrictions for some low-risk areas if cases dropped below ten per day, though Ko has been urged to coordinate with other local areas in Taiwan before lifting regulations. The CECC also stated that it was examining low-risk and high-risk venues, such as places where social distancing and mask-wearing could be maintained. 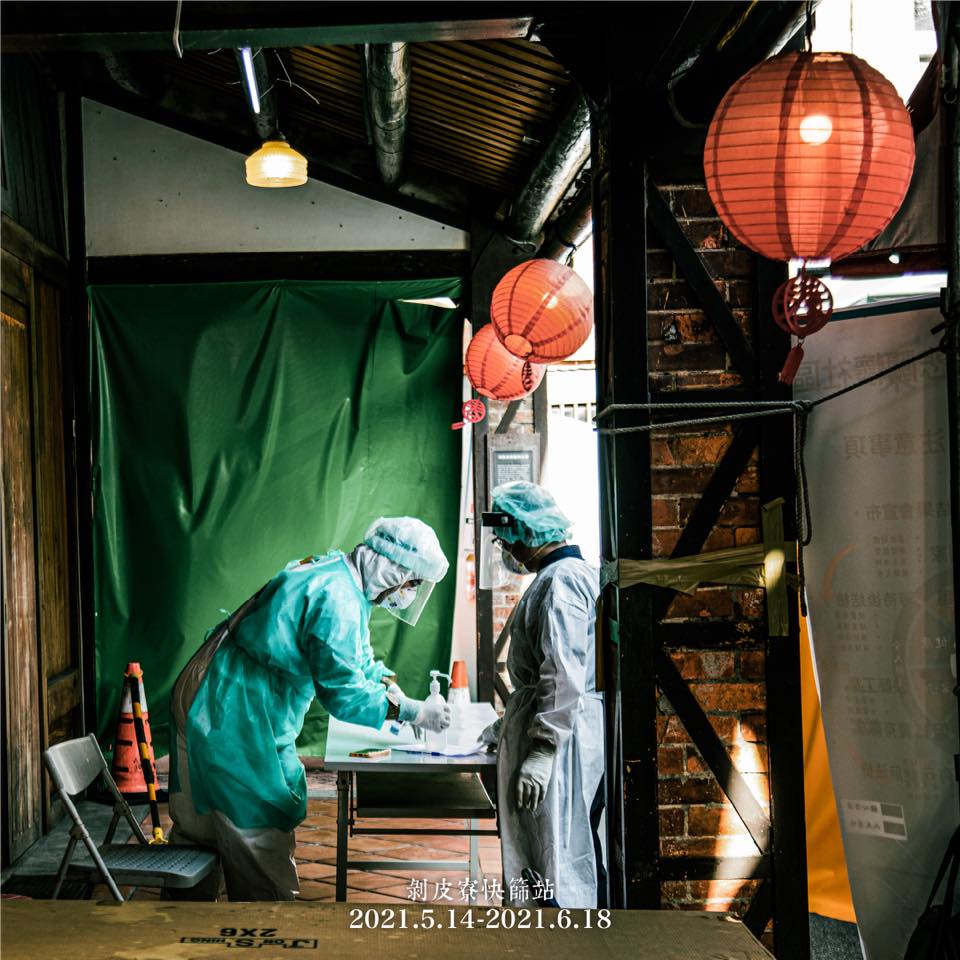 It is possible that there will be demand from the public for keeping some areas locked down, even if cases there have been reduced. While Taipei mayor Ko Wen-je claims that Wanhua is no longer a hotspot, the CECC was asked about the prospect of maintaining near-lockdown measures on Wanhua. It would not be surprising if one of the areas first affected by an outbreak is among the first areas to recover, but the public may still demand that the area remains under lockdown.

Chen Shih-chung stressed that cases would rebound if measures were slackened too fast, but stated that the CECC would observe the situation over the next few days before deciding, citing that the criteria for a level three alert required three different cluster infections per week. Taiwan has not had fewer than three cluster infections per week yet.