US Senators Announce Donation of 750,000 Vaccines, Miaoli Surpasses Taipei in Number of Cases in a First

335 DOMESTIC CASES and eight cases from the backlog were announced at the Central Epidemic Command Center (CECC) press conference today. 36 deaths were also announced. The CECC stated that the backlog cases are mostly cleared, as a result of which the backlog will no longer be announced starting tomorrow.

Cases displayed symptoms between May 24th and June 5th. 119 cases were linked to the greater Taipei area, 107 cases have other causes, while seven cases are of unclear origin. 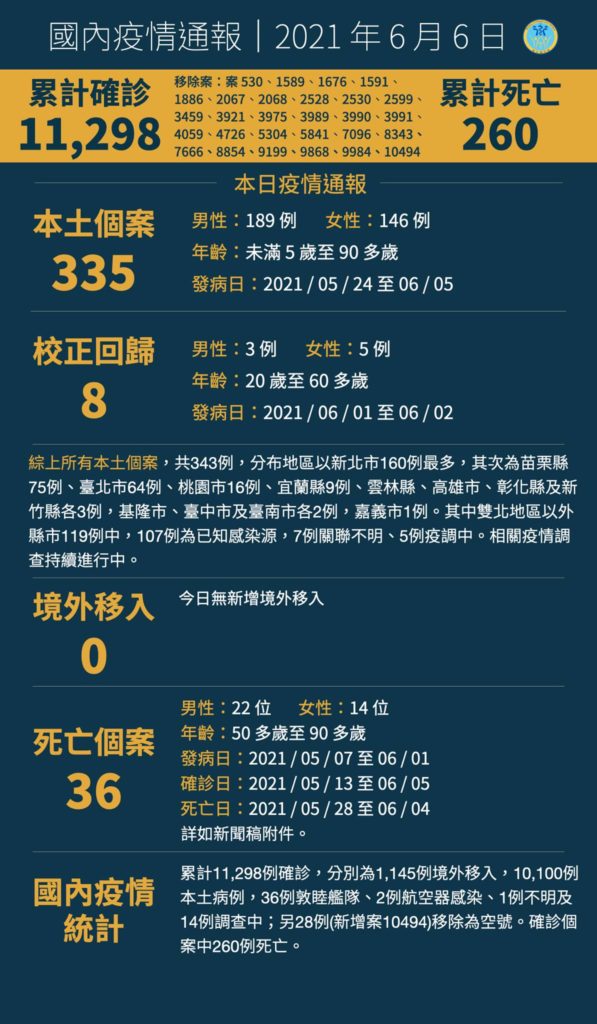 The Miaoli clusters are currently concentrated at three factories. After testing of 7,106 workers at the King Yuan electronics factory in Miaoli, mostly migrant workers, 103 were found to be positive. This is a rate of infection of 1.45%. Workers reportedly had to line up for over six hours to be tested, creating crowds that it was feared could lead to the spread of COVID-19, with testing further delayed due to rain.

14 workers at the Chao Feng electronics factory in Miaoli, which has the same owner as King Yuan and around 2,000 workers, have tested positive for COVID-19. Workers at another factory of 4,000 workers are also being tested. The CECC is examining the Singaporean example of cases spreading among migrant workers and looking for ways to expand space for migrant workers, to avoid crowds where COVID-19 could spread. Arrangements will be made for companies to conduct testing when needed.

A rapid testing station has been set up in the Hsinchu Science Park, which is capable of screening up to 1,000 workers per day. After screening 499 individuals today, two were positive. Testing capacity for hot spots has been expanded, with neighborhood testing stations set up.

Traditional markets were crowded over the weekend, despite warnings that they could prove a hotspot for the spread of COVID-19. Taipei mayor Ko Wen-je stated yesterday that while individuals were asked to limit visiting the market to two days per week, some chose to do so for both days of the weekend, defeating the purpose of such measures. Crowds occurred despite that individuals were only allowed to visit the market depending on whether the last number of their ID number was odd or even and vendors only set up based on whether their address number was odd or even or by floor number.

According to SET, only half of visitors to traditional markets scanned QR codes used for contact tracing. Individuals have been called on to complete shopping within one hour and to have a clear sense of what they are going to buy before going to the market. There will also be measures taken to address crowds gathered outside of markets, waiting to enter. New Taipei mayor Hou You-yi has stated that in New Taipei, 3,600 police officers have been mobilized to monitor traditional markets, with 325 violations issued. Hou called on traditional markets to make arrangements suited to their specificity today. Taipei mayor Ko Wen-je announced strengthened measures for traditional markets including ID checks today, including raising the threat of penalties, though he hopes to avoid overburdening police officers.

The public has been urged to avoid travel over the Dragon Boat Holiday. However, train capacity has been reduced to 20% of normal, and there have been over 100,000 cancellations, around 76% of ticket sales. It is feared that the holiday will lead to a spike in cases, much as there was previously a spike in cases linked to mother’s day.

Available facilities for COVID-19 patients have more capacity now, with patients from earlier on in the outbreak starting to be released. Of 9,448 cases from May 21st to June 4th, domestic and imported, there have been 2,550 people released from quarantine in the past few days. Taipei has the most released from quarantine at 1,407 cases. In specialized wards for COVID-19 treatment, occupants decreased from 1623 to 1599. In quarantine centers in Hsinchu and northern Taiwan, on June 3rd and June 4th, there were 795 and 944 beds respectively, but there are currently more than 1,000 beds that are free. 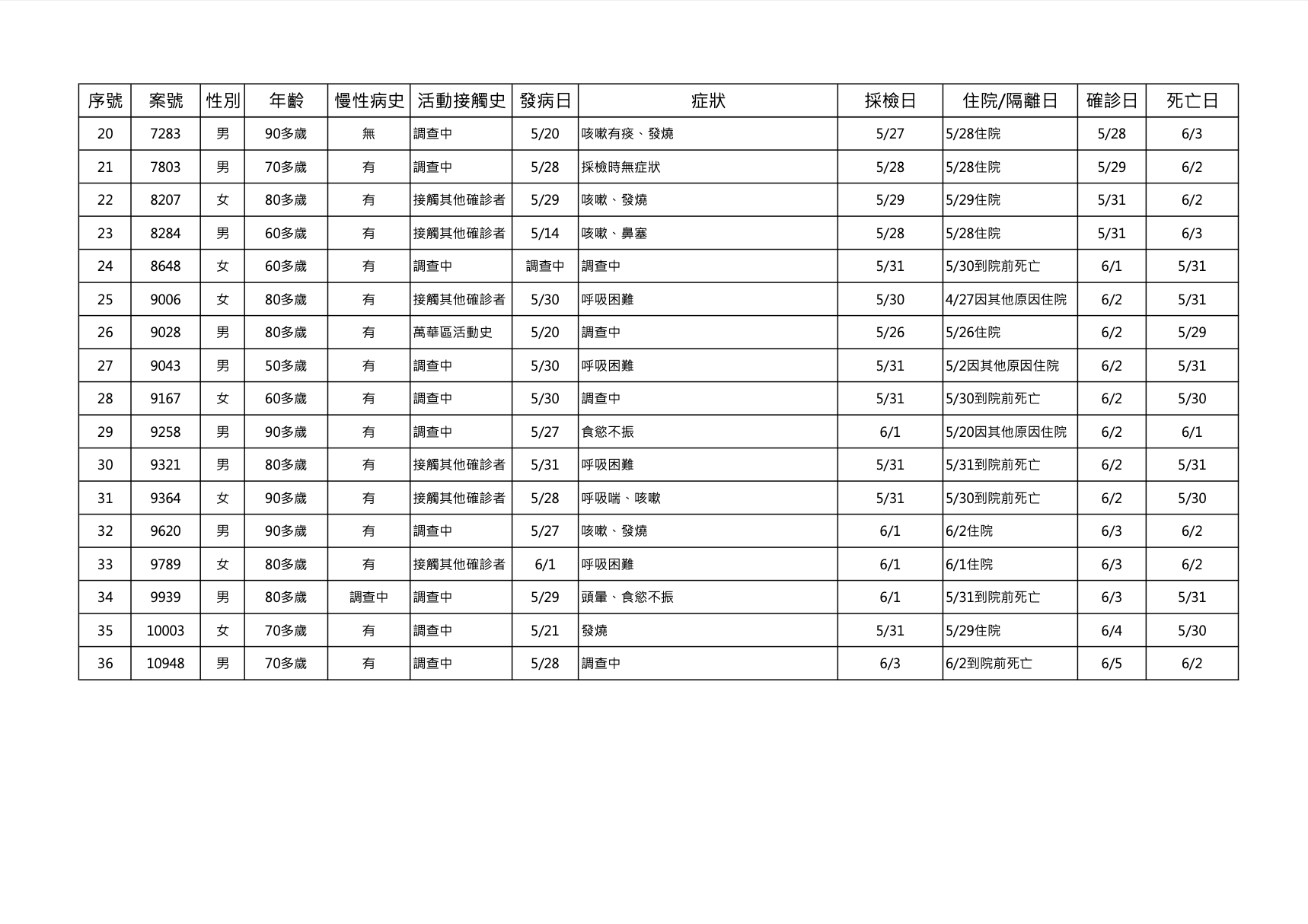 Although there have been reports of a wave of nurses quitting their jobs, Minister of Health and Welfare Chen Shih-chung stated that the CECC had inquired with hospitals about whether this was taking place. This does not appear to be the case, but the CECC is taking measures to ensure that the burden of medical care is shared, with some retired personnel and volunteers having stepped up during the outbreak.

Subsidies to assist workers affected by the current outbreak have been distributed by the government. Subsidies for self-employed workers began on June 4th, while loans for workers will begin on June 15. According to the Labor Affairs Bureau of Taichung, there are 200,000 insured workers in the city that qualify for loans, and 110,000 workers have been given 30,000 NT.

To support local businesses hit by the current outbreak, indie rock festival Roar Now Bangkah has organized a list of 98 restaurants in Wanhua offering delivery and takeout options. This includes restaurants not on Foodpanda or Uber Eats, due to high fees.

Three US Senators, Tammy Duckworth, Chris Coons, and Dan Sullivan visited Taiwan this morning on a military transport plane that arrived from South Korea today around 7 AM. During a press conference held at 7:45 AM, the three senators announced a donation of 750,000 vaccines to Taiwan, stressing that this was to reiterate the importance of the US-Taiwan relation and because of Taiwan’s current urgent need, at a time in which some have questioned US commitment to Taiwan.

Duckworth and Coons are Democrats, while Sullivan is a Republican; the three of them stressed the bipartisan nature of support for Taiwan. Sullivan specifically thanked Taiwan for its mask donations at the start of the pandemic, pointing to a mask he was wearing as from Taiwan. Sullivan also cited the US Strategic Competition Act as showing the importance of the US to Taiwan and that he hopes to pass the United States Innovation and Competition Act to show the US values countries that contribute innovative technologies freely such as Taiwan.

The US has pledged 7 million vaccines to Asia, meaning that Taiwan receives over 10% of the vaccines allocated for Asia—this despite the far more severe COVID-19 situation in India. The visit was the first visit by US elected representatives to Taiwan by transport plane and the first visit by a strategic transport plane to Songshan Airport. Apart from meeting with Minister of Foreign Affairs Joseph Wu, the three senators also met with President Tsai Ing-wen, and were scheduled to return to South Korea three hours after their arrival at 10:30 AM.

Reportedly, government officials did not know the exact number of the donation until it was announced. The majority of the vaccines will be Johnson & Johnson vaccines. Taiwan currently has received 2,866,600 vaccine doses, for a population of 23 million.

As such, many questions today centered around vaccines at the CECC press conference. The CECC currently does not know which brand of vaccines are set to arrive in Taiwan, as a result of which it has asked to be quickly informed in order to make necessary arrangements. If it is the Johnson & Johnson vaccine, this will only require one shot. It is expected that an Emergency Use Authorization will be passed for the Johnson & Johnson and other vaccines in the next week.

The Moderna vaccine will begin to be distributed next week, with category one individuals taking precedent. 30% of category one, who are primarily medical workers, or 70,000 individuals have still not been vaccinated.

For the 1.24 million AZ vaccines that came from Japan, categories 1 through 3 will be prioritized, then workers at long-term care facilities, followed by individuals above 75 and patients undergoing dialysis. Key workers in industry or the military are next prioritized, to maintain the stable operations of the nation. For Indigenous, it is also hoped that Indigenous individuals over 65 can be vaccinated rather than those over 75, likely in awareness that the life expectancy for Indigenous is ten years less than Han individuals. More than 70% of firefighters are vaccinated, with higher rates in the greater Taipei area of 90%. Firefighters are in category two. Around 710,000 vaccinations have taken place to date.

Next prioritized will be those who have already received one shot of vaccine, since it is recommended that the second shot takes place in 10 to 12 weeks. College exam workers will then be vaccinated, given the possibility of a large number of contacts and because of the importance of testing. 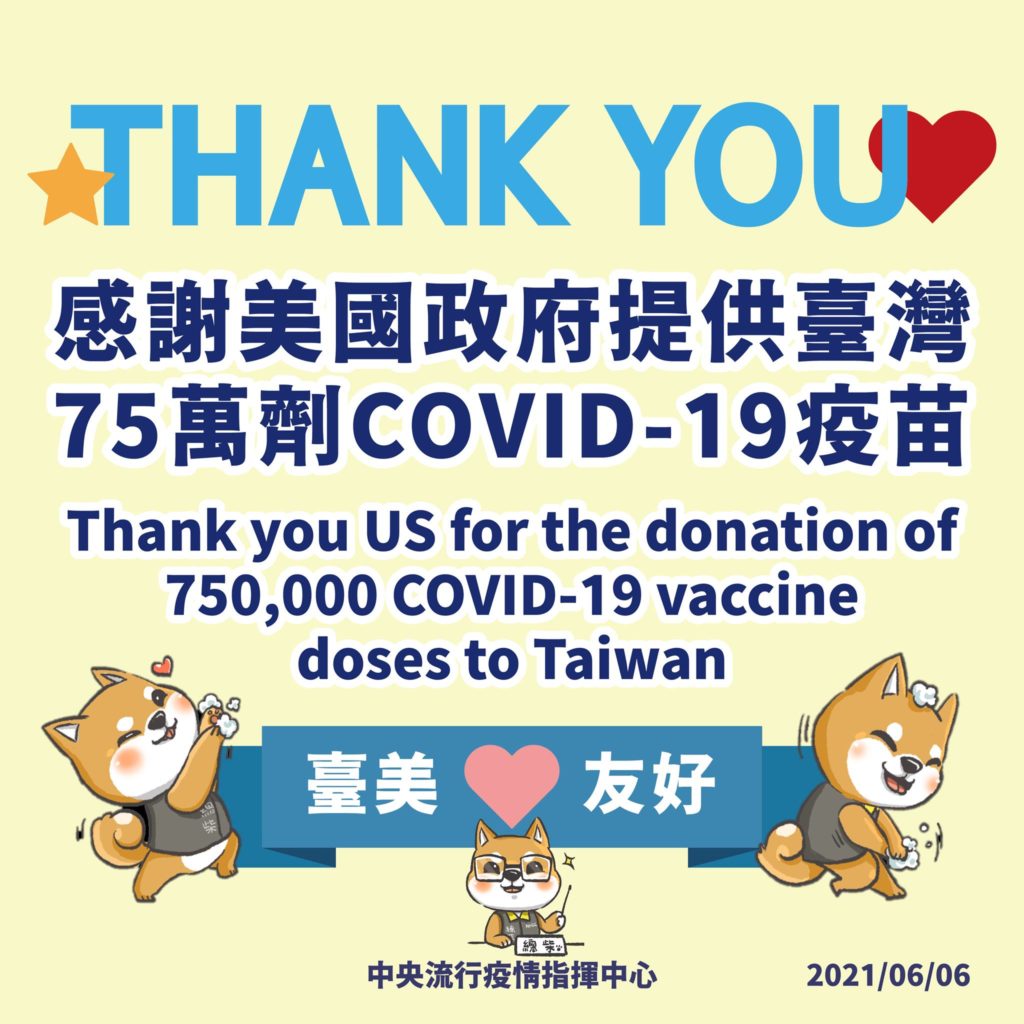 Graphic released by the CECC thanking the US for its vaccine donation. Photo credit: Ministry of Health and Welfare/Facebook

There are rumors that FoxConn CEO Terry Gou has switched strategies, due to his inability to provide an authorization letter from the manufacturer showing that the vaccines he hopes to import to Taiwan are German-manufactured. Rumors suggest that Gou now intends to obtain rights for Taiwan to contract manufacture vaccines and has invested in EirGenix in order to do so. EirGenix neither confirmed nor denied this. It is not impossible that Taiwan would also see Chinese interference regarding attempts to contract manufacture vaccines in Taiwan.

Possibly responding to such rumors yesterday, Chen Shih-chung stated that the CECC had previously been in dialogue with European companies about Taiwan taking on subcontract work and was more recently in dialogue with US companies. When asked about the possibility of the CECC providing a letter of authorization to FoxConn, Chen today stated that the idea was disadvantageous to manufacturers and so the CECC was hoping to find a solution suitable to both sides. Chen brought up that the CECC was hoping to set up a meeting with BioNTech to understand their needs and to assist FoxConn.

The CECC will continue with vaccinations, even if this results in some days in which no supplies of vaccine are available because they have all been used up. Chen stated that Taiwan currently has no plans to donate vaccines to allies, with some reports in the media having suggested Taiwan intends to donate 300,000 vaccines. Chen stated that Taiwan may instead provide funds for allies to purchase vaccines on their own.

The Tsai administration has announced that vaccines would be free starting tomorrow. Some have credited Taipei mayor Ko Wen-je for pushing Tsai into making this announcement by declaring that vaccines would be free at a press conference yesterday, though Ko was actually drawing on funds from measures that passed their third reading by the Legislative Yuan on May 31st and were approved by the Executive Yuan on June 3rd. Ko is accused of trying to take credit for the actions of the central government and it is possible that he may mostly receive credit for Tsai’s announcement. The shift to free vaccinations will not be retroactive, since this would add to the burden of hospitals in processing the refunds.

When asked about the possibility of extending level three by two weeks, the CECC says that after consulting with the Executive Yuan and other agencies, a decision will be made and announced next week. If so, this will likely extend school cancelations into the summer holidays, potentially affecting finals, which could shift to online.