174 DOMESTIC CASES and one imported case were announced at the Central Epidemic Command Center (CECC) press conference today. This is the first day since May 15th, when cases jumped to 180 from 29 overnight, that Taiwan has seen less than 200 daily cases. 26 deaths were announced.

Minister of Health Chen Shih-chung stated that the decline in cases showed a downward trend, but that the public should still be vigilant. 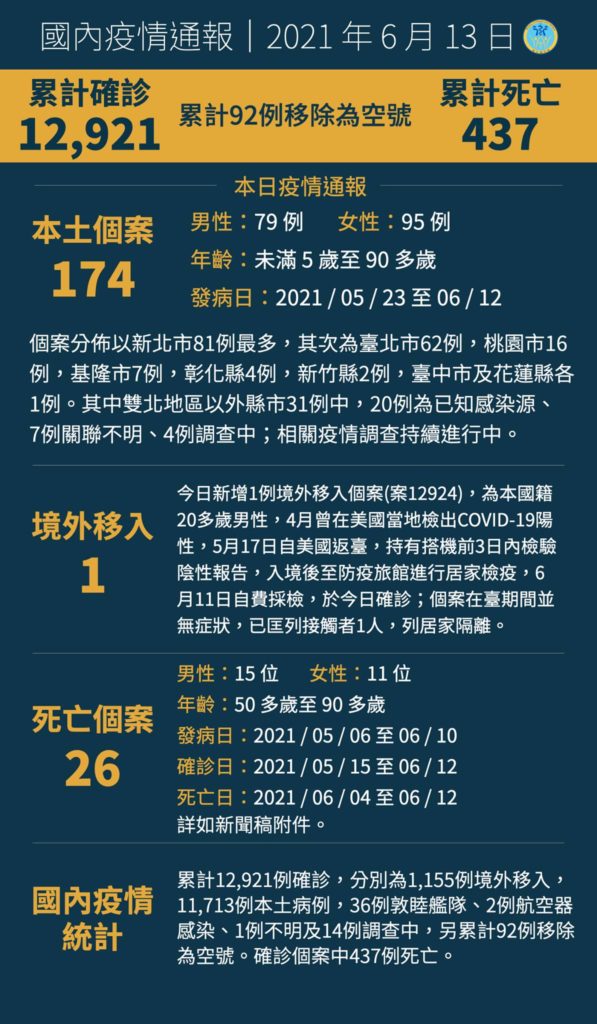 The public was called on to avoid travel during the Dragon Boat Holiday, with train capacity reduced to 20% and many ticket refunds taking place ahead of time. Compared to last year, the High-Speed Rail saw 4.8% ridership or 9,574 riders, the Taiwan Railways saw 2.33% ridership or 10,068 riders, and buses saw 4,009 riders or 10.8%. From Taipei to Taichung, highways declined 132,000 cars, which was 65% compared to last year.

Testing capacity has also expanded, with more than 7,000 tests in Hsinchu yesterday, and over 5,000 PCR tests conducted in Miaoli over the weekend.

With reports that a donor hoped to purchase oxygen machines for Taiwan, Chen stated that the CECC was thankful for such plans, but the CECC had already purchased oxygen machines, with 500 total purchased. 200 are scheduled to arrive from Japan starting today.

National Taiwan University has thanked the public for donations during the pandemic, having received 362 different supply donations to date.

A Chiayi man has been fined 30,000 NT for failing to report travel history and continuously traveling around Taiwan. Despite being a confirmed COVID-19 case, the man hung up repeatedly when investigators tried to contact him about his travel history.

Former Kaohsiung mayor Han Kuo-yu, who was the KMT’s presidential candidate in 2020, has called on the Tsai administration to apologize for the current lack of vaccines. Han has mostly been quiet in politics for some time.

A number of pan-Blue political figures have been implicated in a scandal involving individuals being vaccinated at clinics in Taipei despite not being on the vaccination order. Among individuals vaccinated despite not being on the priority list are former premier Lien Chan, former Yunlin County magistrate Chang Jung-wei, and current legislator Huang Chao-shun. This has led the KMT to begin a campaign calling on politicians to post pictures of their arms with the the hashtag “#ShowYourArms”, claiming this shows they have not been vaccinated. Some views are that Chiang announced this to support Jaw Shaw-kong, who is accused of having secretly been vaccinated due to reports that a media executive surnamed Jaw was among those vaccinated. 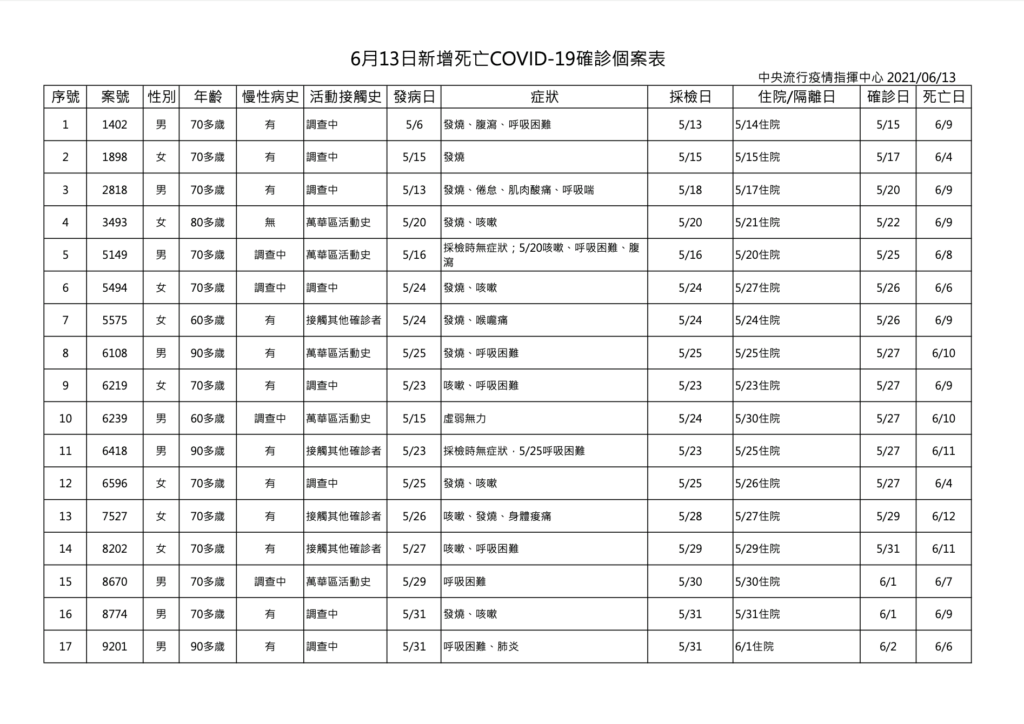 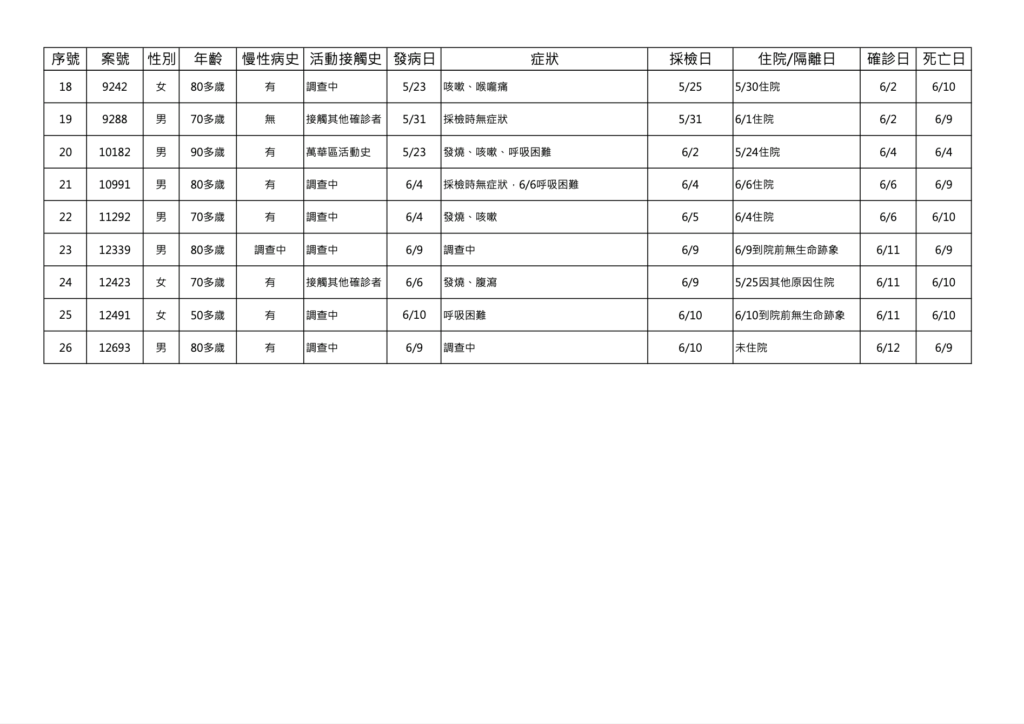 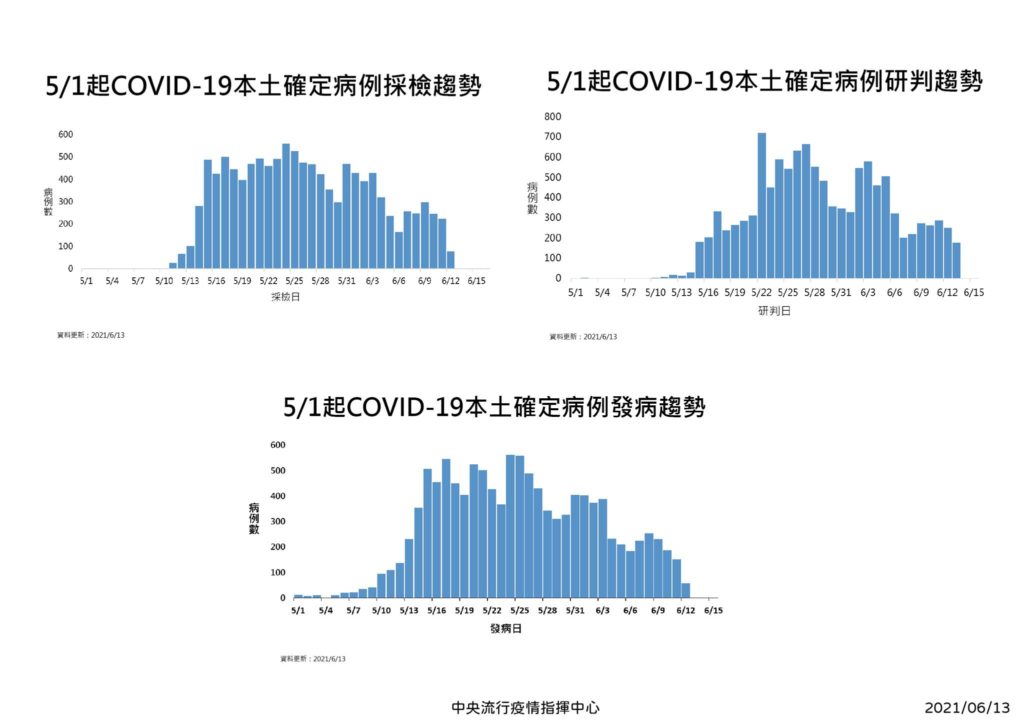 Information on the new deaths today (left and center) and further data released by the CECC. Photo credit: Ministry of Health and Welfare/Facebook

China’s Taiwan Affairs Office stated yesterday that China would like to donate Sinovac and Sinopharm vaccines to Taiwan, while claiming that the DPP is attempting to prevent Taiwanese from obtaining Chinese vaccines that could otherwise save lives. China claims that 62,000 Taiwanese have already been vaccinated with Chinese vaccines. For its part, the DPP has called on China to not interfere in efforts to purchase vaccines abroad.

The Food and Drug Administration approved two different home testing kits for COVID-19 yesterday. Home testing kits will be sold at pharmacies, though there is still a need to follow testing procedures and report results. The CECC stated that testing kits are being imported from abroad because of their known effectiveness, while domestic kits are still being evaluated for effectiveness.

Shanghai Fosun emphasized to shareholders yesterday that it has exclusive rights to distribute BioNTech vaccines in Taiwan, which it includes as part of the greater China region that it handles distribution for. This could prove a further obstacle for attempts by Terry Gou to purchase BioNTech vaccines, which he claims he will directly do from Germany. With Gou unable to provide a letter of authorization from the original manufacturer, Gou now intends to purchase through EirGenix, a firm that he recently invested in.

When asked, Chen Shih-chung stated that Taiwan would respect Fosun’s rights in the greater China region, but called on the company not to interfere in attempts by Taiwan to purchase vaccines.

President Tsai Ing-wen publicly apologized for the deaths due to COVID-19 yesterday. Tsai also stated that she believed that general vaccinations for the public would take place in July.

In the meantime, former Formosa Television chair Dennis Peng has begun alleging that Tsai has secretly been vaccinated with the Pfizer vaccine. Peng is known for alleging that Tsai’s Ph. D from the London School of Economics is fake, having been hit with libel lawsuits in the past by Tsai because of his repeated claims to that effect. Taiwan currently does not have any Pfizer vaccines, making this claim further unlikely.

It can be expected that the next major issue for the CECC will be vaccinations, then.

One can expect some criticisms from local governments directed at the CECC regarding vaccination, continuing tensions that have gone on throughout the current outbreak. In comments yesterday, Ko also attacked Audrey Tang’s vaccine distribution system, which is yet to launch, claiming that it was already too late for the system to be put into use. Tang defended her system, stating that development was finished and it could be launched at any time, but this depends on new waves of vaccines arriving in Taiwan.

The distribution amount has led Taipei mayor Ko Wen-je to criticize the CECC for favoritism toward pan-Green controlled areas, seeing as the greater Taipei area is most affected by the outbreak. New Taipei mayor Hou You-yi was similarly critical. Nevertheless, the CECC has stressed that 10,100 vaccines sent to Kaohsiung are for troops and should not be included in the regular vaccination number, meaning Kaohsiung was allocated 80,000, not 90,100. Later on, the Taipei city government alleged that 16,700 vaccines sent to Taipei were to be used by the central government, resulting in it only receiving 70,000, which is still insufficient for Taipei’s needs. Similarly, Taipei city government alleged that the Kaoshiung city government was receiving information about vaccination allocation before it was.

Information on vaccinations released by the CECC. Photo credit: Ministry of Health and Welfare/Facebook

Taipei mayor Ko Wen-je called on the public to register online for vaccines and suggested that registration should take place through lizhang, or borough chiefs, for those not living in their place of household registration. Ko also stated that IP addresses for registering vaccinations for the elderly are often in the US, Japan, or Hong Kong, suggesting that children and grandchildren living may be helping elderly relatives register. There is still much potential for confusion if registration takes place through lizhang.

With much disinformation and misinformation currently circulating regarding vaccines, the CECC reiterated that it purchased 20 million vaccines abroad but there have been delays in shipments, with vaccines expected to arrive between June and August. The current supply of vaccines is sufficient to vaccinate 10% of the population, but this is not sufficient.

AstraZeneca vaccines were purchased in October, before Emergency Use Authorization (EUA) for AstraZeneca had been passed in any country. To this extent, domestically manufactured vaccines are still being assessed as to effectiveness, with misinformation and disinformation already circulating that the Tsai administration intends to foist inferior vaccines onto the public. Domestic vaccines are more expensive than international vaccines because of differences in manufacturing, as they are protein-based vaccines. That being said, details for pricing are confidential.

Likewise, the CECC is consulting with experts about how to secure international recognition for domestic vaccines. This includes pursuing phase three testing abroad.