219 DOMESTIC CASES were announced at the Central Epidemic Command Center’s (CECC) press conference today. The backlog of tests is resolved now, so there are no backlog cases.

22 deaths were announced. The current death rate is 2.8%, which is higher than the global average, with the CECC stressing that this is often due to the age of the patients and because of underlying conditions.

Cases were primarily concentrated in New Taipei and Taipei, with 123 cases in New Taipei and 54 cases in Taipei. The Miaoli cluster among migrant factory workers has not substantially increased in the last two days, with 16 cases announced today. There were thirteen cases in Taoyuan, where there have been concerns raised because of the large migrant worker population, eight cases in Keelung, two cases in Changhua, and one case each in Tainan, Taichung, and Hsinchu city. Cases displayed symptoms between May 22nd and June 7th. 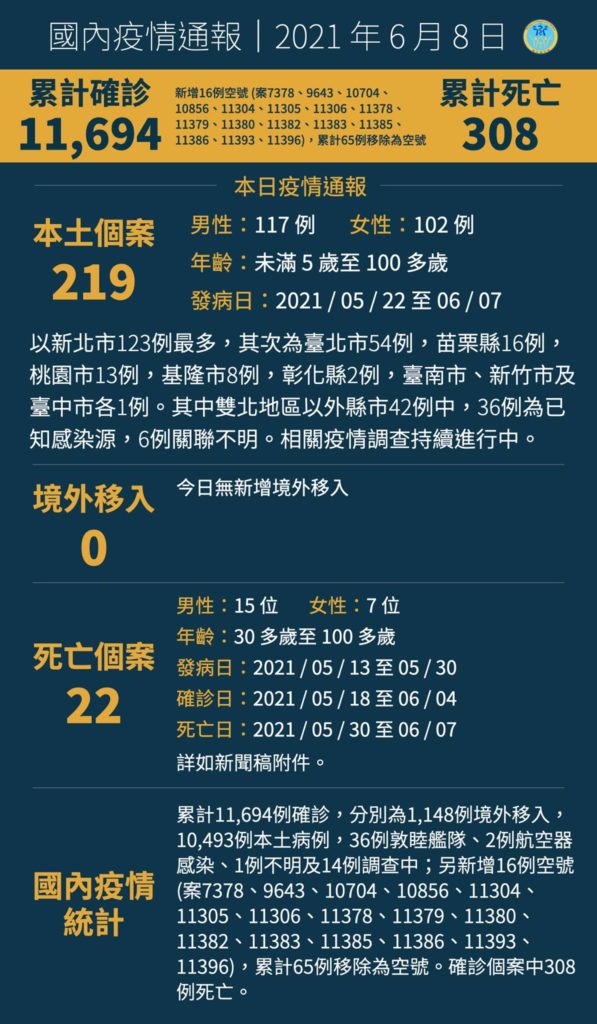 The last two days have had visibly lower cases, with 211 domestic cases announced yesterday, down from 335 cases on Sunday and 476 cases on Saturday. Nevertheless, Minister of Health and Welfare Chen Shih-chung again urged the public to stay in place and not to try to return home for the Dragon Boat Festival this weekend. Some vendors have come under scrutiny for still planning to travel to do business during the holiday.

Efforts are being made to incorporate citizens into the COVID-19 response, including non-government run ambulances. The CECC states that this is not due to lack of capacity but to reduce stress on medical capacity and reduce burden. The publicly-run response will have the same standards as the government response.

A second round of testing for workers linked to the Miaoli cluster will be carried out on June 11th and June 12th. 960 migrant workers are in quarantine facilities, 1,027 workers are in quarantine in dormitories, and a second round of testing among them will start on June 9th. 1,100 migrant workers in a dormitory with seven buildings were rapid tested and are waiting for PCR results. Three buildings are thought to have higher risk, with 250 of their residents sent to quarantine facilities.

The Miaoli County government has announced that migrant workers are not allowed to go out, raising questions about the fact that the current level three alert is not a full lockdown, though members of the public are asked to avoid going out when unnecessary and gatherings of more than five indoors and more than ten outdoors are forbidden. The CECC did not give a clear answer when asked about the legality of this measure today, as well as whether the Miaoli County government checked with the CECC before announcing this policy. Likewise, when questioned, the CECC stated that how to address illegal workers is still under consideration. The Taiwan International Workers’ Association has been highly critical of this restriction.

75,000 Moderna vaccines will be distributed as part of the first wave, with medical personnel prioritized, and this is directly distributed to hospitals without going through local governments. The overall vaccination order is still being drawn up, with key personnel for maintaining the stability of the country scheduled for vaccination, and these categories are to be drawn up by the Ministry of National Defense, Ministry of Economic Affairs, and Ministry of Transportation and Communications.

Arrangements will be made for facilities in which COVID-19 could easily spread, such as jails, but it is not clear what this concretely consists of. 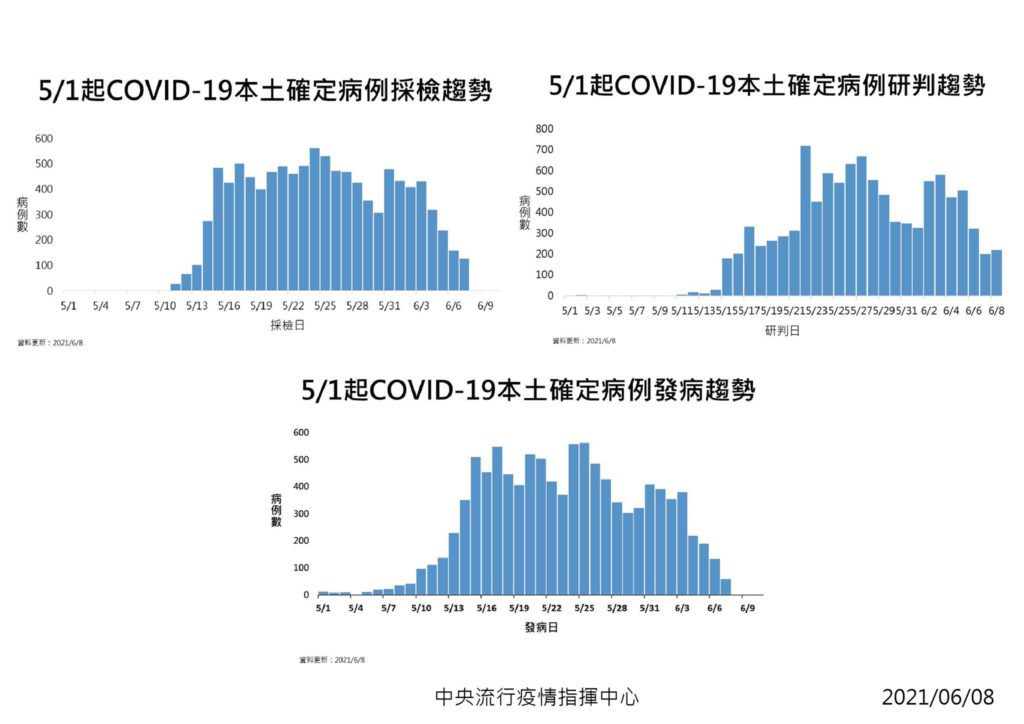 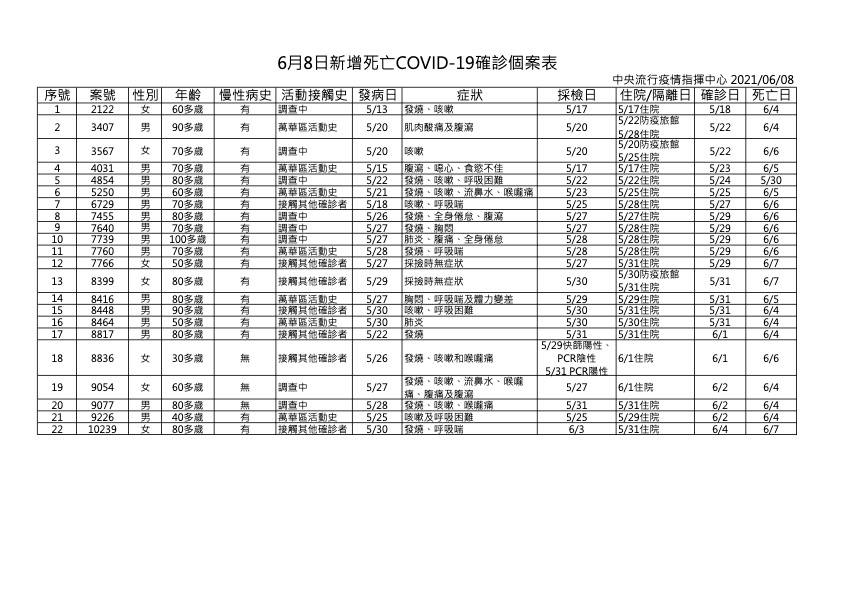 Data released by the CECC (left) and information on the newly announced deaths. Photo credit: Ministry of Health and Welfare/Facebook

Taipei Ko Wen-je emphasized today that for testing by companies, this still needs to follow the set process for testing, with PCR tests carried out after rapid testing. Ko has been criticized after seemingly lashing out at doctors who have not yet been vaccinated, stating in his press conference yesterday afternoon that there were still 6,900 doses of vaccine allocated for medical staff that have not yet been used. Namely, over 5,000 dentists were only notified that they could now be vaccinated by the city government last week and the Taipei Department Health repeatedly claimed that it had not received a roster from the Taipei City Dental Association, leading the association to send a roster three times.

According to the Taipei city government, Wanhua is still a hotspot. There is particular concern about the First Fruit and Vegetable Wholesale Market and Huanan Market because of the key role they play in food distribution for Taipei.

Nevertheless, there is currently no legal penalty for vaccinations that defy the current priority order of vaccinations. The CECC did not reply when asked to comment on whether there would be penalties for Chang.

General examinations for civil servants will be delayed from July to October this year, as a result of the outbreak. The Keelung Chang Gung Market was reopened today after being closed due to COVID-19 cases. The market was quickly closed again today after testing linked further infections to the market.

18 police officers in New Taipei have been confirmed to have COVID-19, with 22 having tested positive through rapid testing. It is now known that there have been 271 individuals at four electronics factories in Miaoli, mostly migrant workers, who have tested positive for COVID-19. Disinfections will be carried out for the next three days by the army.

Premier Su Tseng-chang reported to the Legislative Yuan about the Executive Yuan’s current financial relief plan today. In particular, Su was questioned about the government distributing funds to occupational groups heavily affected by the current outbreak, rather than all citizens. The KMT had previously called for 10,000 NT to be distributed to all citizens, regardless of their financial or occupational status. Su has cited that the government has limited funds, seeing as if 10,000 NT was distributed to all citizens, this would also include wealthy individuals who have sufficient funds not to be severely affected by the outbreak. There are currently more than 5,000 people on unpaid leave at 467 companies.

As in past days, much attention has been focused on vaccines. At the Legislative Yuan earlier today, Chen Shih-chung stated that vaccine deliveries for COVAX have been delayed for unclear reasons, while there are production delays for AstraZeneca vaccines in Thailand. As a result, two million vaccines originally expected to arrive this month may be delayed until July. Hundreds of thousands of Moderna vaccines are still expected to arrive this month, however. It is still hoped that ten million doses will be delivered by the end of August.

Chen Pei-zhe, a doctor at Academia Sinica who was a member of the review committee for domestically manufactured vaccines, resigned yesterday from the committee overseeing domestic vaccines. Chen criticized protein vaccines, such as those used in domestically manufactured vaccines, as ineffective and claimed that such technology has not been sent to the US FDA for review. However, this does not seem to be correct, as Novavax vaccines using the same technology will be supplied to the US as soon as summer. Chen claimed that the committee was under pressure from the Tsai administration, though he has been criticized by other members of the review committee.

When asked today, Chen Shih-chung stated that Taiwan went with protein-based vaccines from domestic manufacturers because it lacked the capacity to manufacture mRNA vaccines. However, according to Chen, there have been improvements on this front from Academia Sinica.

NPP legislator Handy Chiu questioned Minister of Health and Welfare Chen Shih-chung on the import of rapid antigen tests for COVID-19 at the Executive Yuan this morning. Chen stated that no manufacturer had yet applied for their import. When criticized for passiveness, Chen sought to emphasize that the CECC was not simply waiting for manufacturers to take the initiative, and the CECC stated that it was in contact with manufacturers this afternoon.

Former vice president Chen Chien-jen, who was the epidemiologist that led Taiwan’s fight against SARS, has weighed in on the controversy regarding shortening quarantine periods for airplane pilots that is believed to have allowed COVID-19 into Taiwan’s borders. Chen stated that he believed this policy needed to be reviewed. Chen also stated that the key month for vaccinations will be August, and that domestic vaccines should have less side effects than other vaccines, due to the differing technology used from other brands. 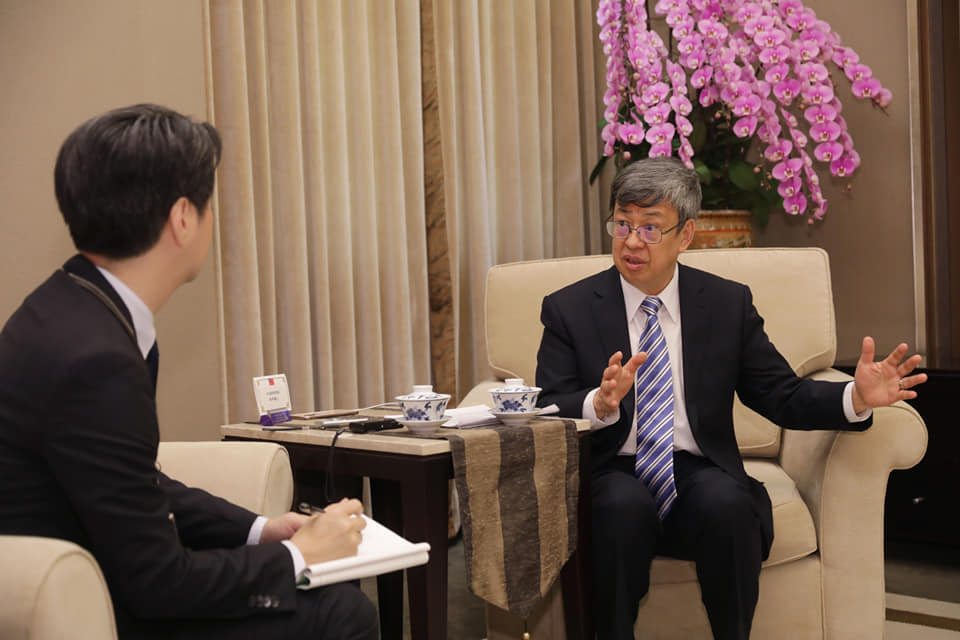 41,190 individuals that have already received their first dose of vaccine will be able to receive the second dose of their vaccine starting on June 15th. The second dose will be drawn from the recent shipment of vaccines from Japan.

In the wake of the donation of 1.24 million AstraZeneca vaccines earlier this week, disinformation is on the rise downplaying this donation. Such disinformation claims that this is, in fact, a small number of vaccines and that the reason why the Japanese government did not donate more was because the Tsai administration indicated that it wishes to rely on domestic vaccines.