THE SECOND INAUGURATION ceremony for president Tsai Ing-wen was held today, marking the start of Tsai’s second term as president after her January 2020 election victory. William Lai was also sworn in as vice president, replacing Chen Chieh-jen, as were members of Tsai’s cabinet.

Given the ongoing COVID-19 pandemic, inauguration activities took place on a smaller scale than usual. Instead of holding a large-scale inauguration ceremony on Ketagalan Boulevard, after the swearing-in ceremony in the Presidential Office Building, Tsai’’s inauguration speech took place at the Taipei Guest House. International diplomatic guests did not travel to Taiwan for the ceremony. There were a total of 207 guests at the event. Current KMT chair Johnny Chiang and former president Ma Ying-jeou of the KMT refused to attend in protest of the Tsai administration, with former presidents Lee Teng-hui and Chen Shui-bian not attending due to health reasons. 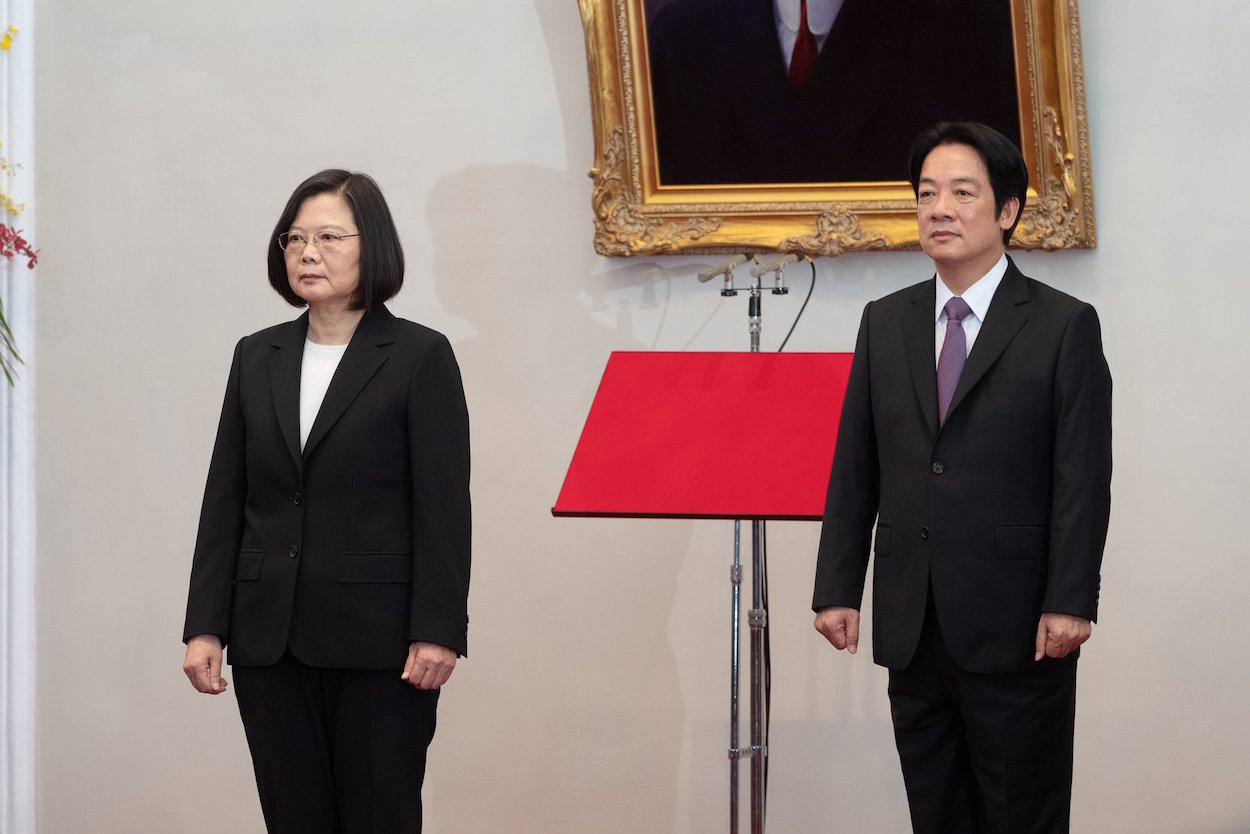 Before Tsai’s inauguration speech, videos of diplomatic officials and politicians expressing congratulations to Tsai on the occasion of her second inauguration were broadcast. This included the heads of state of Taiwan’s remaining diplomatic allies, such as Eswatini, Guatemala, Nauru, and Palau, as well as politicians and representatives of countries including the Czech Republic, Denmark, Germany, India, Japan, Latvia, the United Kingdom, the United States, South Korea, and others. It is to be noted that in most of these videos, Taiwan was referred to as the Republic of China (Taiwan), phrasing which has emerged in past years as the Tsai administration’s apparent preferred nomenclature for referring to the Republic of China and Taiwan.

Particular emphasis was given to expressions of congratulations from American officials and elected representatives, which included American Institute in Taiwan chair James Moriarty, former US ambassador to the UN Nikki Haley, former US Assistant Secretary of Defense Randall Schriver, Assistant Secretary of State for the Bureau of East Asian and Pacific Affairs David Stillwell, United States Deputy National Security Advisor Matthew Pottinger, and US elected officials such as Marco Rubio, Steve Chabot, Ted Cruz, Ted Yoho, and others.

Comments by Stillwell and Pottinger were longer than other videos. Stillwell cited economic and educational ties between Taiwan and the US, citing Taiwan’s contributions to the global War on Terror, stating that Taiwan had tried to raise the alarm regarding the ongoing COVID-19 pandemic, that it had responded to the pandemic while preserving protections for human rights, and claiming that the US would speak up for Taiwan in international bodies. Pottinger cited that Tsai had won by more votes than any other Taiwanese president and cited Chinese physicist Fang Lizhi to claim that human rights and democracy were universal in nature, rather than specifically “western.”

Some controversy broke out almost immediately regarding that in these comments by Pottinger, which were in Chinese, he used the term “Wuhan pneumonia”—with some attributing the use of the term to the Tsai administration despite that this was a statement by Pottinger. Pottinger used the term referencing that Chinese state-run media had used the term. Though one still sees “Wuhan pneumonia” and similar terms in some media outlets, particularly those of a pan-Green political slant, and some government statements, one notes Tsai’s inauguration speech did not refer to “Wuhan” once, and avoided use any specific nomenclature for COVID-19 in Chinese, with terms such as 新型冠狀病毒 (“novel coronavirus”) not being mentioned in the speech either. 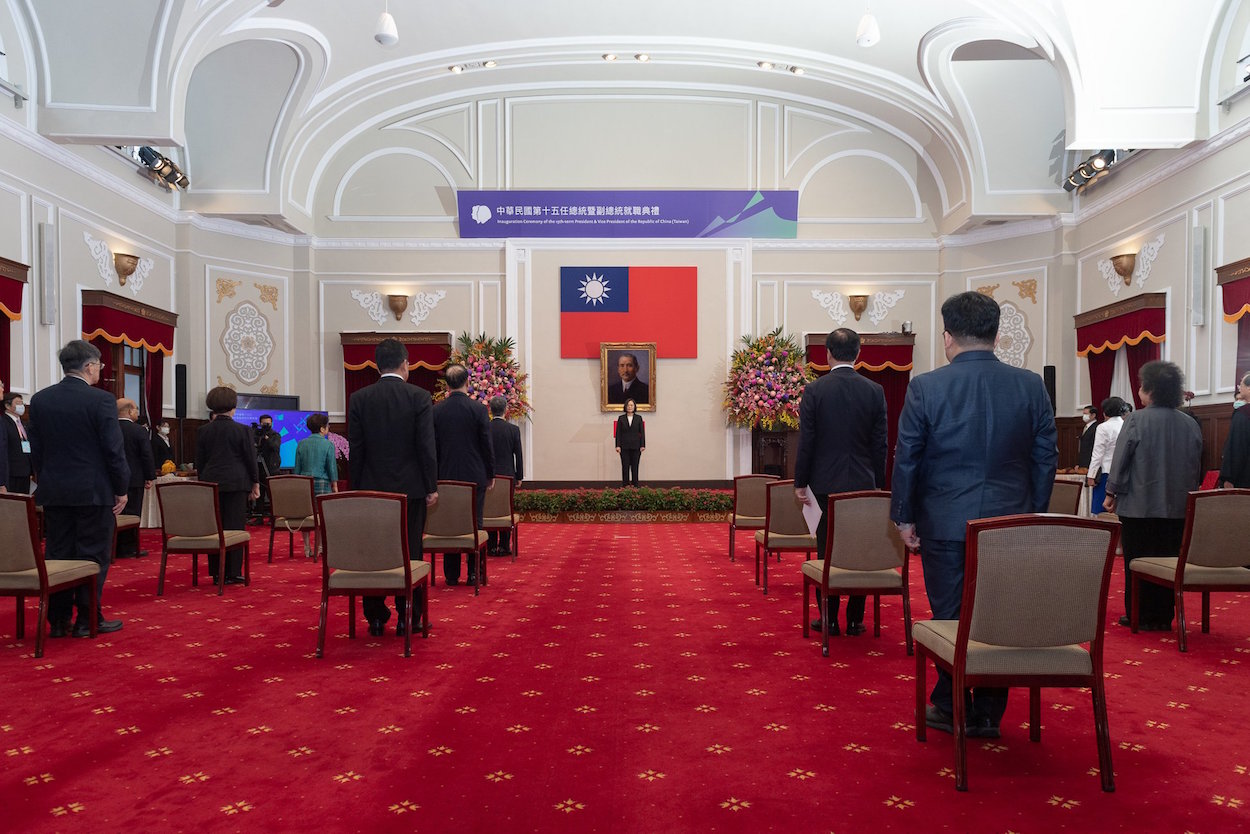 However, the translations “COVID-19” and “coronavirus” were used in English for the official English translation of the speech. Tsai’s word choice was likely aimed at placating those in the pan-Green camp insistent on the use of terms such as “Wuhan pneumonia” (武漢肺炎), as well as those critical of the use of the term. The terms “Wuhan” (武漢), “novel” (新型), “pneumonia” (肺炎), or even “coronavirus” (冠狀病毒) do not appear in the text of Tsai’s speech.

A statement by US Secretary of State Mike Pompeo congratulating Tsai was also read aloud. Notably, the statement claimed that support for Taiwan from the US was bipartisan and unanimous, but one notes that the videos of US politicians congratulating Tsai came primarily from highly conservative Republican politicians. Democratic presidential candidate Joe Biden also congratulated Tsai on Twitter today, but support from Biden did not come up during the inauguration itself.

Performances that took place at the inauguration included a performance by the Taiwan National Choir and a ROC military ensemble, with the songs chosen to represent Taiwan’s cultural diversity.

Tsai’s inauguration speech began by thanking the Taiwanese people for their efforts fighting COVID-19, stating that the “sense of pride in our country, this community’s shared destiny, and the memories of these past months will live on in all of our hearts”. Tsai touted international recognition of Taiwan’s accomplishments fighting COVID-19 and efforts to project soft diplomacy in the midst of the pandemic, such as sending medical supplies internationally. Tsai asked Taiwanese citizens to continue to be prepared for changes to the world as a result of the COVID-19 pandemic, in outlining her plans for the next four years of governance.

Tsai stated that in the past four years, she had grown Taiwan’s economy in creating links between Taiwan and the international world, referencing that Taiwan’s economic growth was now highest among the Four East Asian Tigers, and Taiwan has maintained economic growth despite the COVID-19 pandemic. Tsai stated that plans for future growth would focus on the information and digital industries, leveraging on Taiwan’s strengths in the semiconductor and ICT industries, and that Taiwan would further develop biotechnology and medical technologies, particularly seeing as these industries are of greater importance than ever because of the COVID-19 pandemic. Tsai stated that she would also act to stimulate the defense industry and promised that in developing green and renewable energy, Taiwan would have 20% of its energy sources from green energy by 2025. 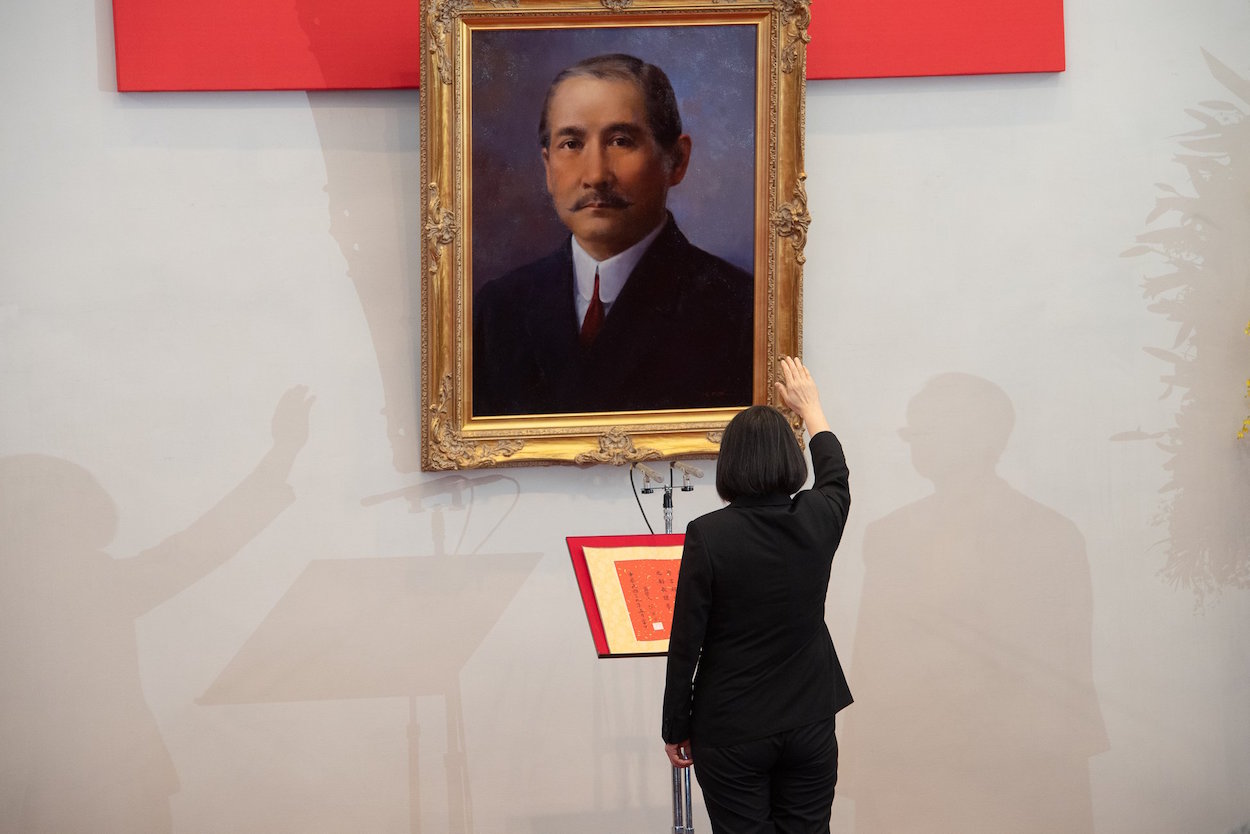 Given the successes of the Tsai administration in fighting COVID-19 through managing the production of needed medical supplies, Tsai stated that this model of using “national teams” would continue, in order to coordinate domestic manufacturing as a way to stimulate the market. Financial support for development would continue as well.

To this extent, as in past years, Tsai stated that Taiwan would pursue signing international trade agreements with the US, Japan, and European Union countries, and that efforts to build stronger ties with Southeast Asian countries through the New Southbound Policy would continue. Efforts to lure international talent to Taiwan would also continue.

Regarding social policy, Tsai asserted that the government would continue efforts to bolster the social safety net. This would not only be through strengthening healthcare for the sick, infirm, and elderly, but also improving childcare, and the mental health support network—particularly for individuals suffering from mental illness that fall out of the social safety net and end up committing violent crimes. Tsai also called for greater accountability from the judiciary for cases involving mental illness and violent crimes. 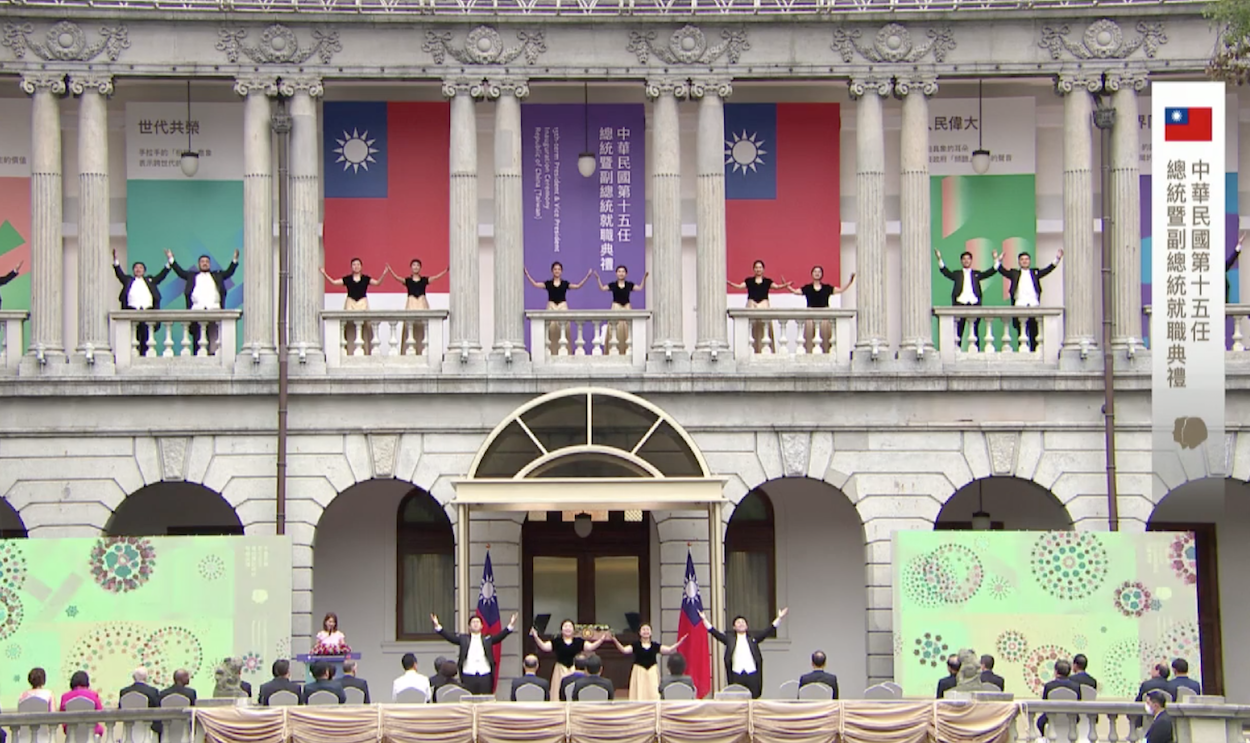 Performance by the Taiwan National Choir during the inauguration. Photo credit: Presidential Office

Likewise, Tsai stated that Taiwan would continue to seek participation in international organizations and would “continue to handle cross-strait affairs according to the Constitution of the Republic of China and the Act Governing Relations between the People of the Taiwan Area and the Mainland Area”. With regards to cross-strait relations, “peace, parity, democracy, and dialogue” were necessary for relations with China and that Taiwan would not accept “use of ‘One country, two systems’ to downgrade Taiwan and undermine the cross-strait status quo.” Tsai stated that “cross-strait relations ha[d] reached a historical turning point” but that “both sides have a duty to find a way to coexist over the long term and prevent the intensification of antagonism and differences.”

Consequently, one can interpret Tsai’s comments as indicating continued support for the status quo in her second term, rather than any attempt to pursue de jure independence—as critics of the DPP that see Tsai a dangerous provocateur of cross-strait relations feared Tsai might do during her second term.

But it should be clear that Tsai has increased space to maneuver with in her second term, precisely because of maintaining the status quo and not pushing for de jure independence during her first term. It is significant that, compared to her first inauguration speech, there was no reference to the “1992 Consensus” in any form in her second inauguration speech. During her first inauguration speech in 2016, Tsai indicated a deliberately ambiguous position on cross-strait relations by refusing to acknowledge the “1992 Consensus” but referring to the “historical facts of the 1992 talks.” This indicated that Tsai did not accept the framework of “One China,” but was also a compromise measure indicating that she would seek to pursue maintenance of the status quo rather than de facto independence, because of the fact that the DPP historically never acknowledged the 1992 Consensus as anything but a post-facto historical fabrication by the KMT.

By contrast, in her second inauguration speech, Tsai did not even refer to the 1992 Consensus even ambiguously, but simply rejected “One Country, Two Systems”. This would be a rejoinder to Chinese president Xi Jinping for continuing to assert “One Country, Two Systems” as the framework under which unification between Taiwan and China should take place in a speech on new year’s last year as well as to reference to the ongoing protests that took place in Hong Kong in the past, which served as a means for Tsai to reframe longstanding issues regarding the split between independence and unification in 2020 elections. But again, as the DPP historically never acknowledged the 1992 Consensus as anything but a post-facto historical fabrication by the KMT. With a strengthened position in her second term, Tsai no longer needs to even indirectly acknowledge the 1992 Consensus in any form.

Nonetheless, it should not be surprising that this careful positioning by Tsai still did not prevent Chinese state-run media outlet Xinhua News from hitting back at Tsai for advocating Taiwanese independence after her speech. Despite support for the status, Beijing will continue to perceive Tsai as pro-independence, as it will of any Taiwanese leader with any other position than pushing for political unification with China. 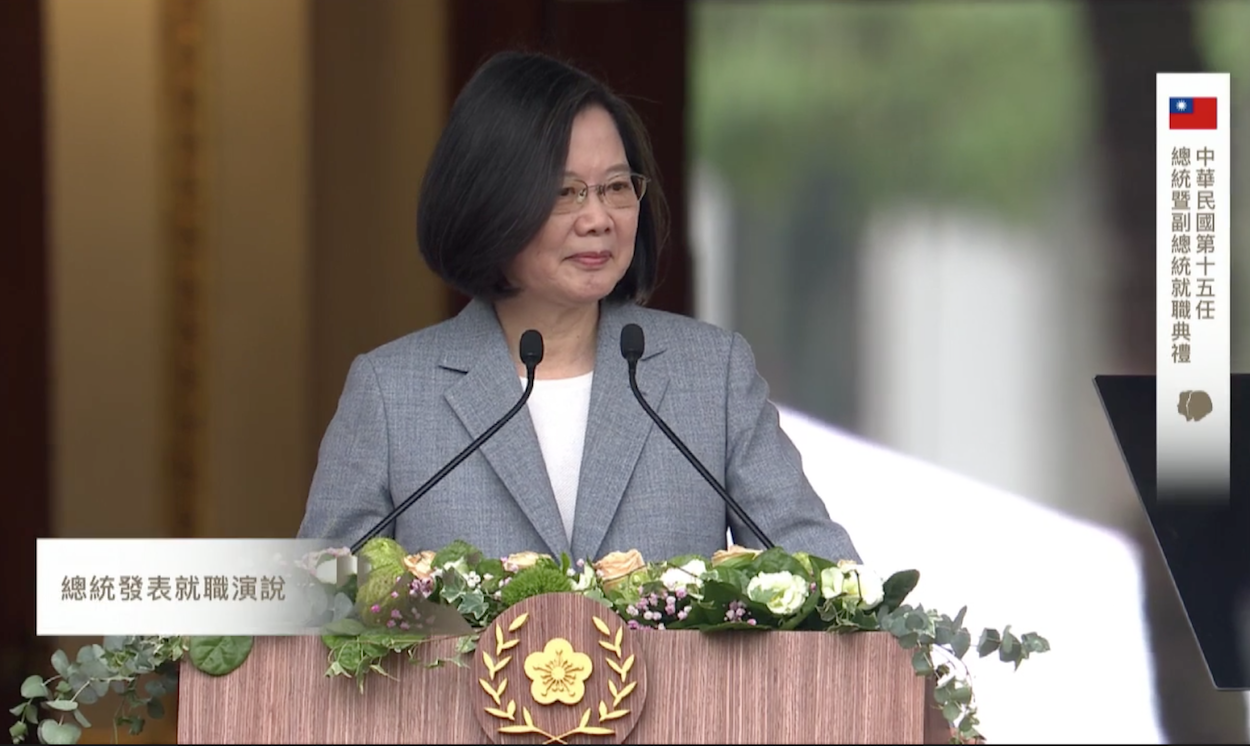 The last section of Tsai’s speech focused primarily on judicial and voting reforms. Tsai stated that judicial reform would continue, with the transition to a lay judge system, and that efforts to enact constitutional reform would also continue. Tsai stated that a National Human Rights Commission under the Control Yuan would be established and that a new Examination Yuan would also be appointed. Tsai also reiterated promises to lower the voting age to eighteen, seeing as Taiwan has among the highest voting ages in the world.

Tsai then closed by reiterating the need for solidarity in Taiwanese society, hailing “everyday heroes” in the fight against COVID-19, but also calling attention to the need for continued vigilance to overcome the challenges posed by COVID-19.

Indeed, one notes that Tsai’s speech leaned heavily into touting Taiwan’s successes fighting COVID-19. Apart from that this has led to global recognition for Taiwan, as was raised in Tsai’s speech, this has led to Tsai’s domestic approval rating seeing an all-time high. The KMT at present is struggling to find avenues to attack the Tsai administration for its handling of COVID-19, but has few means of doing so. Tsai starts her second term with a strong political position, then, in large part due to her successful handling of COVID-19.