ONE DOMESTIC CASE and five imported cases were announced at the Central Epidemic Command Center’s (CECC) daily press conference today. The one domestic case was not already in quarantine. One death was announced.

The one domestic case today was from New Taipei, though they were confirmed in a hospital in Taipei. They are thought to likely be an older case. 92.5% of cases to date have been released from quarantine. `

179,215 were vaccinated yesterday, bringing vaccination coverage to 40.32%. This is 43.66 per 100 people. Around 160,000 vaccinations were of Medigen, though some Moderna vaccinations took place as part of mixed vaccinations for category one individuals. There was around 90% attendance for vaccination appointments, though Minister of Health and Welfare Chen Shih-chung did not have the exact statistics on hand. 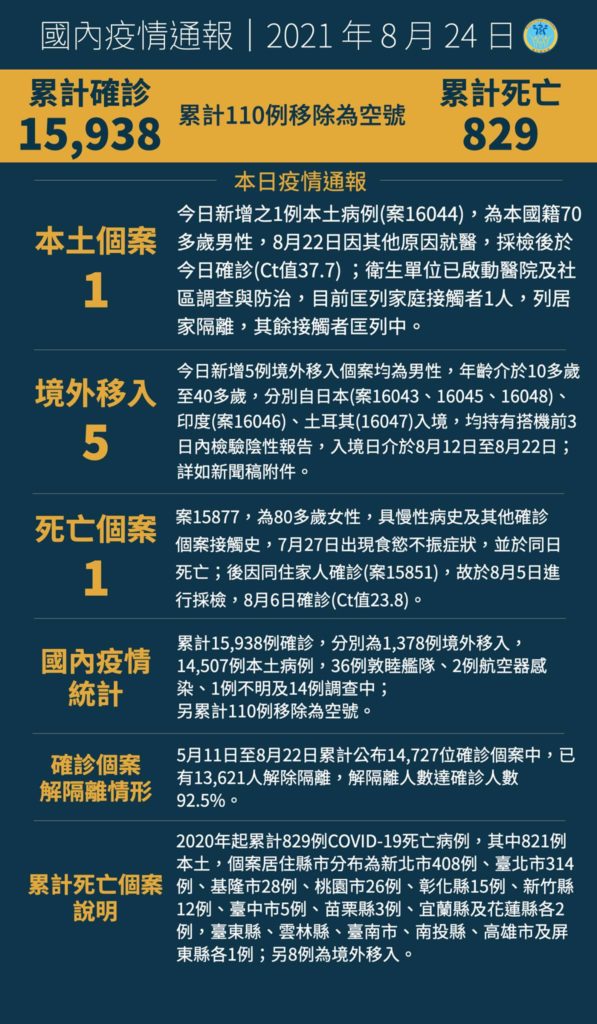 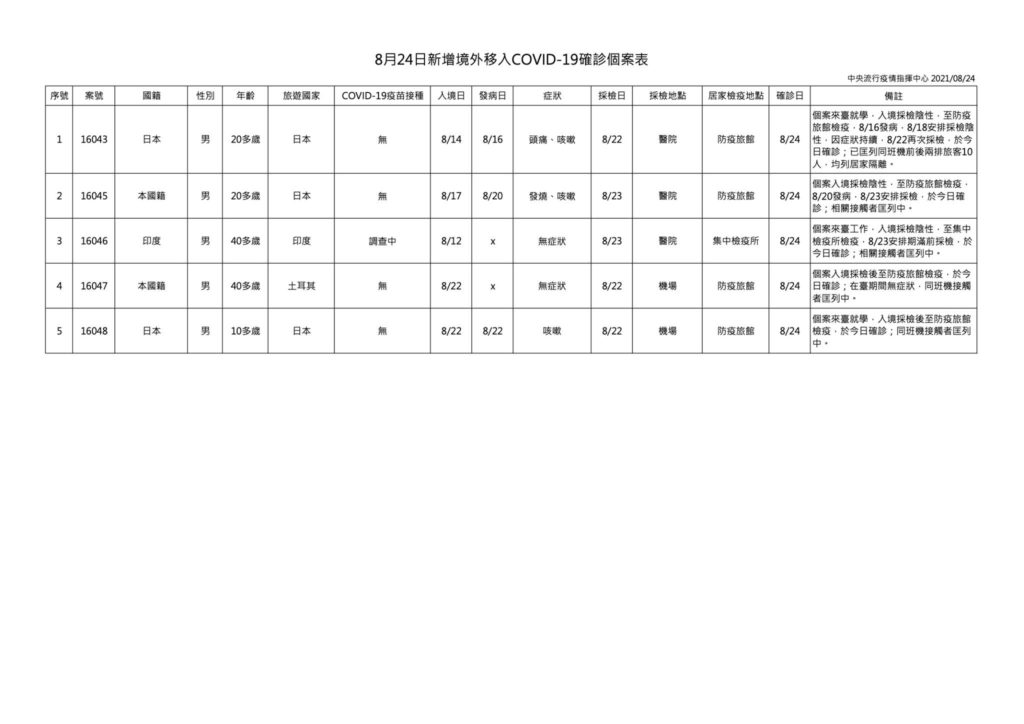 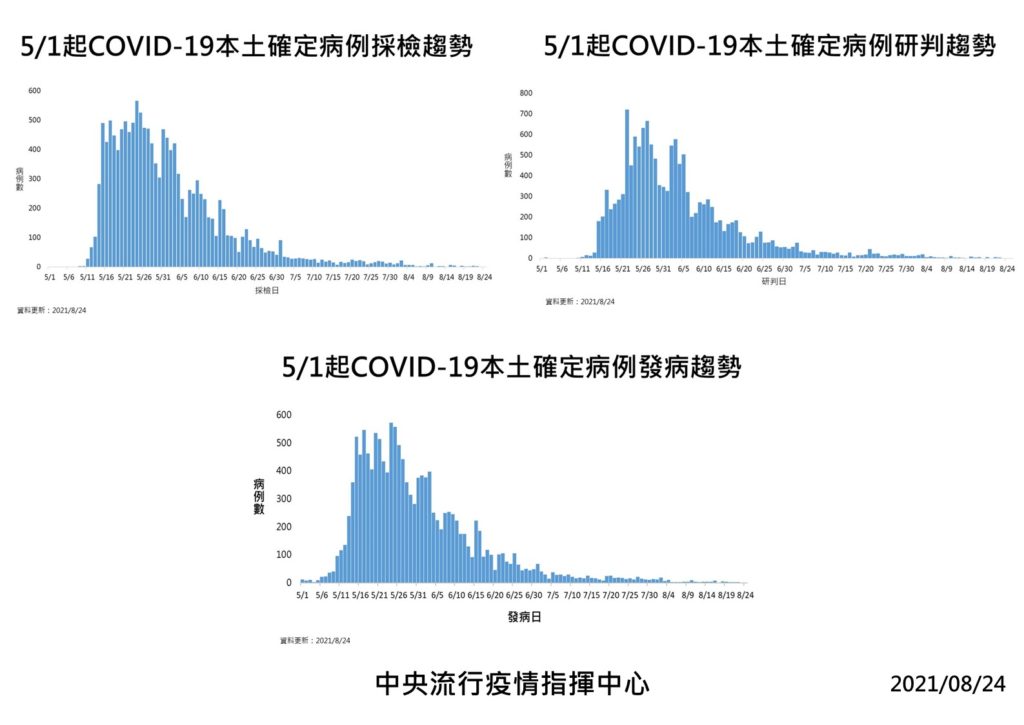 Information on the new cases today (left), information on the imported cases from today (center), and further data released by the CECC (right). Photo credit: Ministry of Health and Welfare/Facebook

When asked, Chen stated that the CECC has no plans to halt Medigen vaccination after the death, and is investigating. This has not prevented members of the KMT such as media personality Jaw Shaw-kong from calling on the public to refuse Medigen vaccinations outright and that it is preferable not to be vaccinated than to be vaccinated with Medigen. 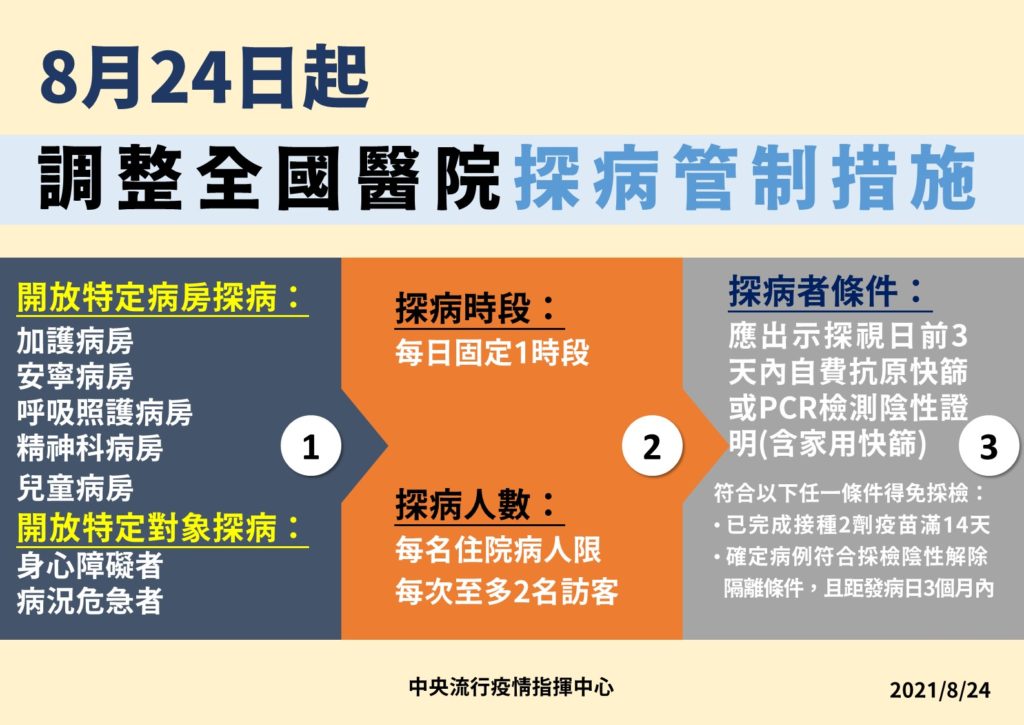 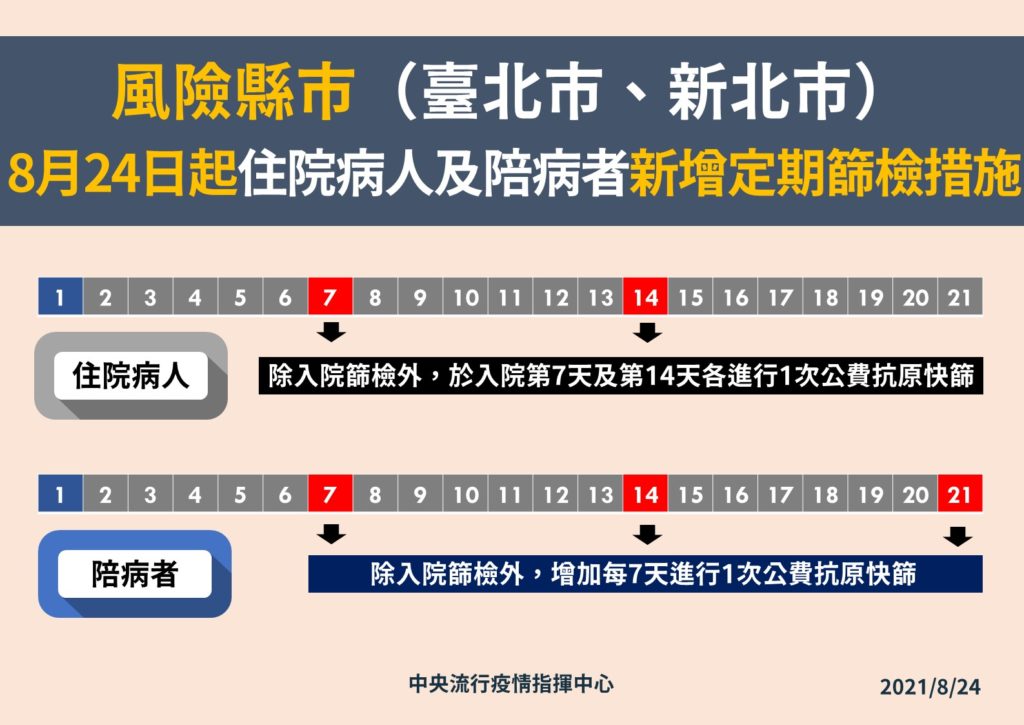 Information on measures for patients and visitors at medical institutions. Photo credit: Ministry of Health and Welfare/Facebook

According to Chen, the approval of BioNTech by the US Food and Drugs Administration, moving beyond just Emergency Use Authorization, does not affect the situation in Taiwan very much. Chen emphasized that Taiwan has purchased sufficient Moderna vaccines for next year, but that the CECC did not rule out further vaccine purchases.

The CECC will coordinate with the Ministry of National Defense regarding vaccinations for soldiers. The CECC will not force soldiers to be vaccinated with any specific vaccine brand, however.

Apart from that some regulations for restaurants will be loosened, which was previously announced, some restrictions on visitors to medical facilities will also be relaxed. That being said, restrictions will remain stricter for the greater Taipei area, with individuals entering medical facilities and their caretakers required to be tested when they enter, and tests to continue regularly every seven days. These tests will be publicly paid for, in the hopes of reducing the burden on caretakers and patients.

From August 27th onward, all inbound travelers will be required to take quarantine taxis to quarantine hotels or facilities, whereas they were previously allowed to drive themselves if they had a car. 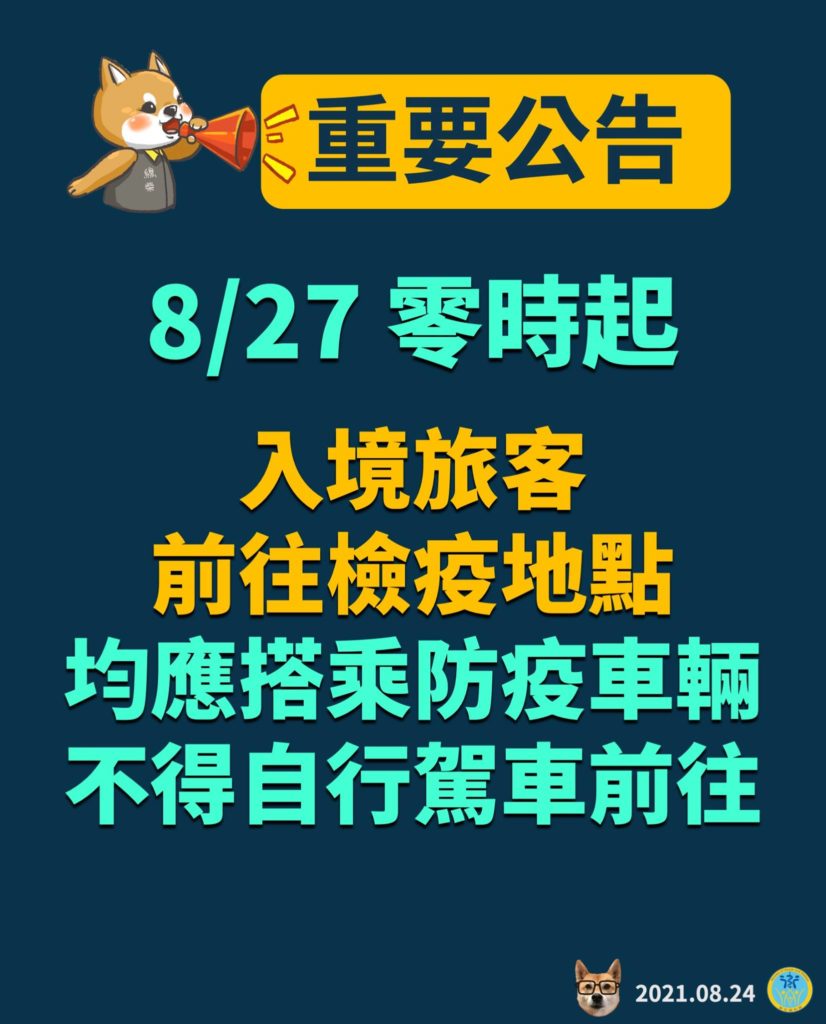 When asked if current COVID-19 measures will disconnect Taiwan and the international world, affecting the economy, the CECC does not view the current fourteen-day quarantine system for inbound travelers as having had too large of an economic impact.

According to New Taipei mayor Hou You-yi, the one case in New Taipei today was in Tucheng, but the reason why they are suspected to be an older case is because of contact with a friend that became infected with COVID-19 after traveling to Wanhua to buy things. The rate of infection at testing sites in New Taipei is .03% currently, with around 2,200 tested per day.

As cases continue to be found at hospitals when testing visitors in New Taipei, these are asymptomatic cases, showing that there are still undetected transmission chains of COVID-19. Nevertheless, many of these are old cases. New Taipei is drawing up lists of remaining teachers that still need to be vaccinated. Hou also called for soldiers to have the choice of at least two or more vaccines, while stating that soldiers should not receive any pressure to be vaccinated with any specific vaccine brand from their superiors.