The article was about China’s launch of nine Jilin-1 Gaofen-03 satellites that will join the Jilin-1 EO satellite constellation. The satellites were launched into space yesterday morning using a Long March-11H (Y2) rocket fired from the De Bo 3 Launch Platform.

However, from the title of the article, as well as its contents, it would be easy to misconstrue the article as referring to China launching a missile—not a rocket intended to launch satellites—over Taiwan in a manner similar to, say, North Korea firing ballistic missiles over Japan. Such an action would be a dangerously escalatory action by China aimed at Taiwan. The article is written in such a manner as to conflate launching a rocket into space with firing a missile over Taiwan. 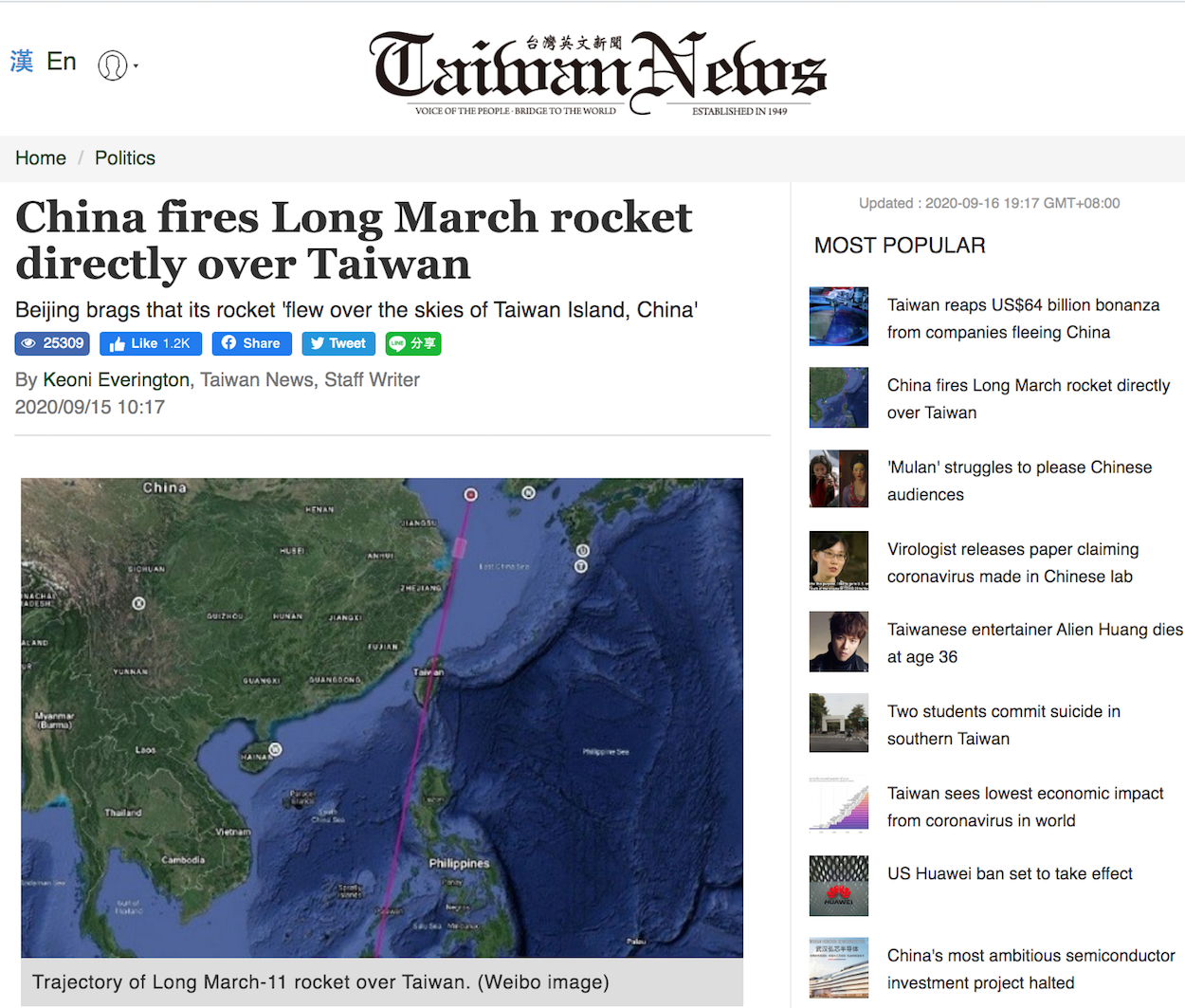 Indeed, Chinese-language headlines also referred to China launching a rocket over Taiwan because this is how a Chinese-language Weibo account phrased the announcement of the planned launch. And, as mentioned by security experts such as Institute for National Defense and Security Research researcher Shu Xiaohuang in comments to the media, it is not incorrect to suggest that the rocket launch was a slap in the face for Taiwan.

Launching a rocket into space via a route that passed over Taiwan takes place after consecutive days of war games by the Chinese military near Taiwan. So it is not wrong to state that the Chinese government was likely attempting to intimidate Taiwan with its rocket launch. Concerns are also warranted. It is not possible to know ahead of time what is being launched before a launch takes place. Moreover, China generally announces its satellite launches, which take place from remote inland launch sites, with little advance warning—often forcing external observers to have to rely on data gathered by Chinese rocket enthusiasts in order to predict upcoming launches.

Yet the article in Taiwan News notably attempts to elide the differences between rockets and missiles.

The Long March family of rockets is China’s primary expendable launch system family. Indeed, the Long March family was originally derived from intermediate-range ballistic missiles, something generally true of rocket technology. The launch yesterday took place from a sea-based platform, something China has touted as representing an advance in its rocket capacities because China’s launch sites are generally located inland. This is because they are former nuclear missile launch facilities.

Security concerns regarding the ability of the US or Soviet Union to target nuclear launch facilities located in coastal regions—where the majority of the world’s spaceports are located because this allows for spent rocket stages or debris from failed launches fall harmlessly into the sea—is why China’s launch sites are located inland. This fact has led to issues for China’s space program in the past, because of rocket stages, parts, or debris falling into populated areas.

But different requirements between missiles and space rockets intended to carry a payload into space led to design divergences in China’s current generation of rockets and missiles. Consequently, the Long March family uses cryogenic fuel as propellant, whereas the current generation of Chinese missiles uses solid fuel. This is something that the Taiwan News article attempts to pass over. 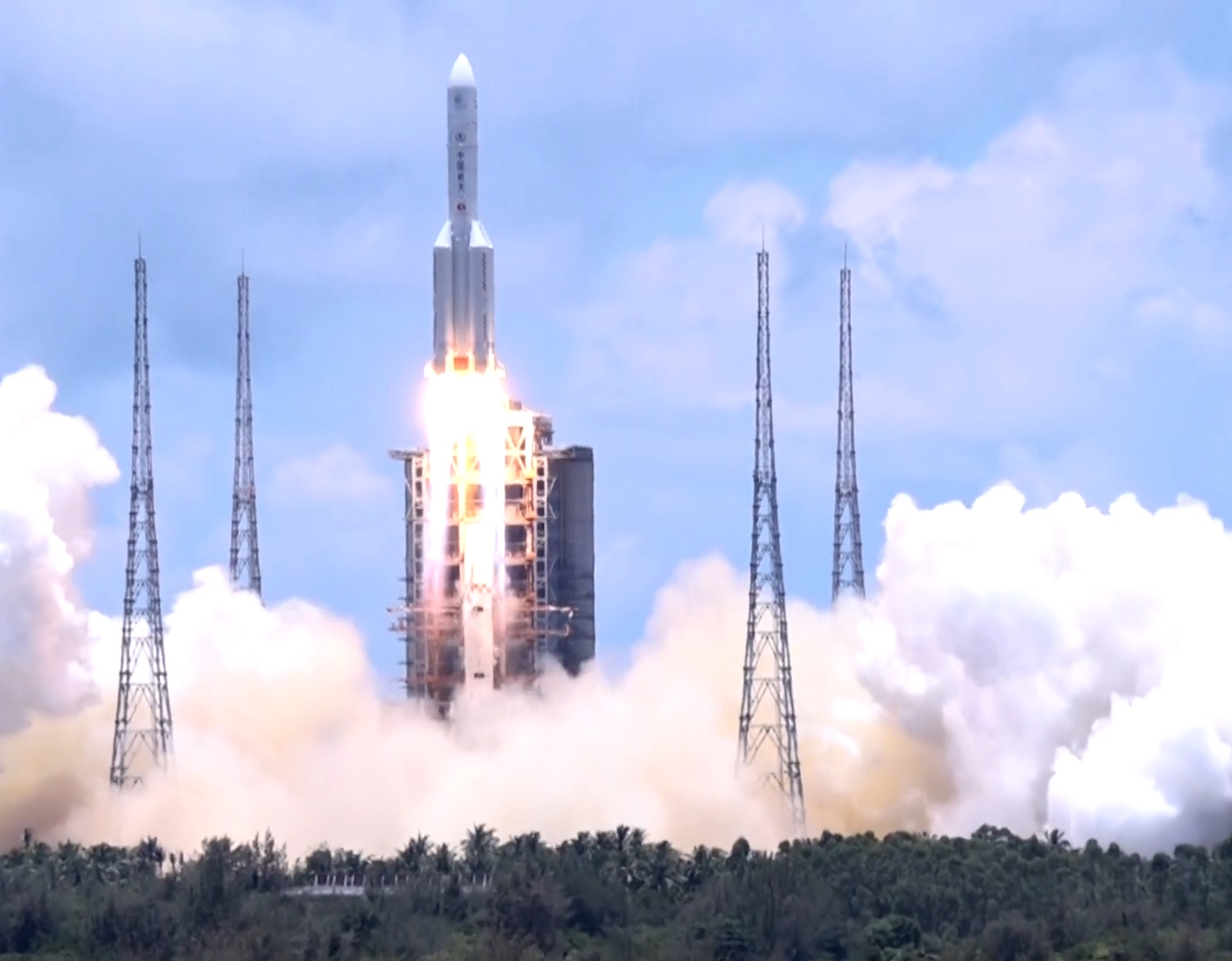 Use of the Long March to deliver payloads of nine satellites into space at the same time has been referred to as the “one arrow carries nine stars method” (一箭九星) in Chinese-language reporting. China has launched up to nine satellites into space using this method several times before. However, the Taiwan News article attempts to claim that this term refers to “the Long March’s ability to carry either several satellites or multiple warheads in the event of a war.” This is not a claim that one sees occur with any frequency in Chinese-language media, whether Taiwanese or Chinese.

The Taiwan News article, then, strikes as sensationalist—attempting to play up tensions between Taiwan and China for the sake of hits. Yet this strikes as dangerous for Taiwan’s national security. Regional actors, seeing the Taiwan News report, could potentially view it as a credible report of Chinese threats against Taiwan, particularly if the report were perceived as China firing a missile over Taiwan, and overreact, perhaps if claims by Taiwan News started to be picked up by international media with poor fact-checking practices and news of this circulates.

It bears pointing out that articles by Taiwan News have caused diplomatic blow-ups in the past. In April of this year, Singaporean First Lady and Temasek Holdings CEO Ho Ching caused a diplomatic spat after posting a Taiwan News article written by Everington with the comment “Errrr” on Facebook. This is illustrative of that Taiwan News articles are, in fact, shared by high-level government leaders.

But Taiwan News has also been known to publish misinformation regarding the COVID-19 pandemic. Earlier this year, articles by Everington on Taiwan News published claims that China was hiding its actual COVID-19 death toll and claimed that the mass cremation of COVID-19 victims was taking place in Wuhan. However, images from a Chinese COVID-19 tracker that Taiwan News claimed to have shown the real COVID-19 death toll are easily faked, and the article incorrectly cites scientific studies that it cherry-picked to try and make its point.

The claim that mass cremations were taking place in Wuhan in pieces by Everington was supposedly backed by a data visualization of heightened levels of sulfur dioxide around Wuhan. But the data visualization that Everington cited did not display real-time empirical data. Instead, the visualization was a forecasting tool reliant on projections from datasets like those of the NASA GEOS-5 model.

But to this extent, one also notes that Taiwan News has a record of publishing news reports that could potentially cause large and irreversible consequences in stoking regional conflict—again, if regional actors were to take them as factual and overreact, particularly if such reports are taken as factual by China, the US, or Japan, or become amplified by international media. 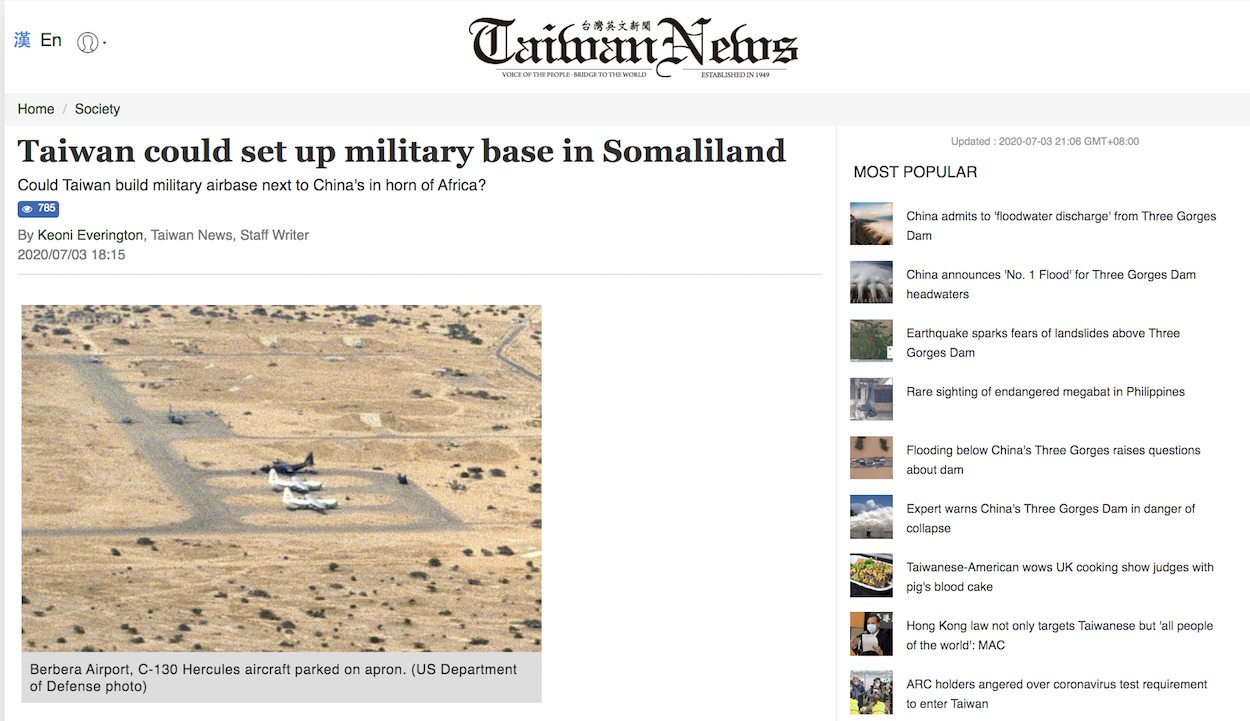 This can be observed with past reports by Everington in Taiwan News. After news broke in July that Taiwan was planning on setting up a representative office in Somaliland, an article published by Everington claimed that Taiwan could set up a military base in Somaliland—something that would likely provoke reprisals from China, which established its first overseas military base in neighboring Djibouti in 2017.

Everington’s report cited a French website to back its claims. This French website itself cited unnamed sources in Hargeisa, Somaliland’s capital, to make this claim. Clicking through the website, one finds that a number of the website’s sections are blank, suggesting that the site is not a news outlet or a reliable source. Reactions against Everington’s report eventually led it to be deleted from Taiwan News’ website, although the article is still viewable on Archive.org. But this did not prevent international outlets from sometimes reporting this as fact, failing to fact-check Taiwan News and assuming that it was a reliable local news source.

The likelihood of conflict breaking out—even accidentally—is higher when unreliable news sources are taken as factual by regional actors or other media outlets. One notes that since Taiwan exchanged representative offices with Somaliland, it has become an issue that Somalilanders have taken a number of Taiwanese news sources with checkered records as being accurate news sources, including Taiwan News.

This is why articles by Everington in Taiwan News, such as his article on the possibility of Taiwan establishing military bases in Somaliland or China’s rocket launches over Taiwan, have proven dangerous to Taiwan’s national security. In this respect, we should count ourselves lucky that Taiwan News’ story regarding the rocket launch did not gain wider circulation or become amplified by international media in such a way that this could potentially have had irreversible consequences.

The dangers of fake news or disinformation, as amplified by unreliable media outlets, are real. This was illustrated earlier this month after rumors began circulating that the Taiwanese government had shot down a PLA warplane—news that was amplified by Indian print and television outlets—leading the Ministry of Defense to issue a statement that this was fake news.

This story gaining wide circulation could have had permanent consequences for Taiwan, such as if the PLA used such news reports to claim that this was an act of aggression by the Taiwanese military, which it would then use as a pretext for a military invasion—a false flag incident, in other words. Given heightened military activity by China around Taiwan, and near the Pratas/Dongsha Islands over the past year, this is a strong danger at present. 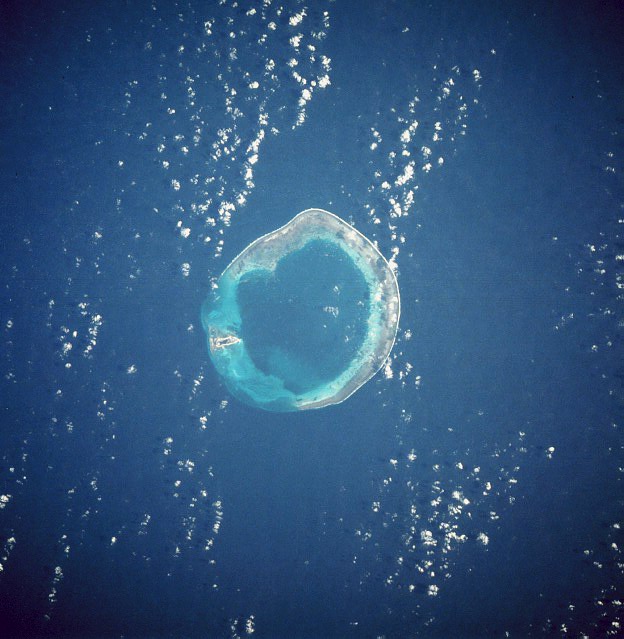 Such stories would have gained credibility, particularly if large Taiwanese domestic media outlets, English-language or otherwise, had begun reporting them as fact. The Chinese government would have been able to point to such reports to claim that one of their warplanes had credibly been shot down by the Taiwanese military, if even domestic Taiwanese media outlets were reporting on this event as having happened. And it should be clear that, among Taiwan’s major English-language domestic media outlets, there is, in fact, at least one media outlet with highly spurious fact-checking practices that could prove dangerous in that respect.