KAOHSIUNG MAYOR Han Kuo-yu was successfully recalled today in a recall vote. Han was defeated by overwhelming margins, with 939,090 votes in favor of his recall and 25,051 votes against his recall, out of a total of 969,259 individuals that voted.

97.4% of those who voted were in favor of Han being recalled, while only 2.6% of voters were against the recall. 42.14% of Kaohsiung’s voter electorate participated in the recall vote. This is the first successful recall vote of a standing politician after the threshold required to hold a recall vote was lowered after legislature passed in November 2016, as well as the first mayoral recall held in Taiwanese history. 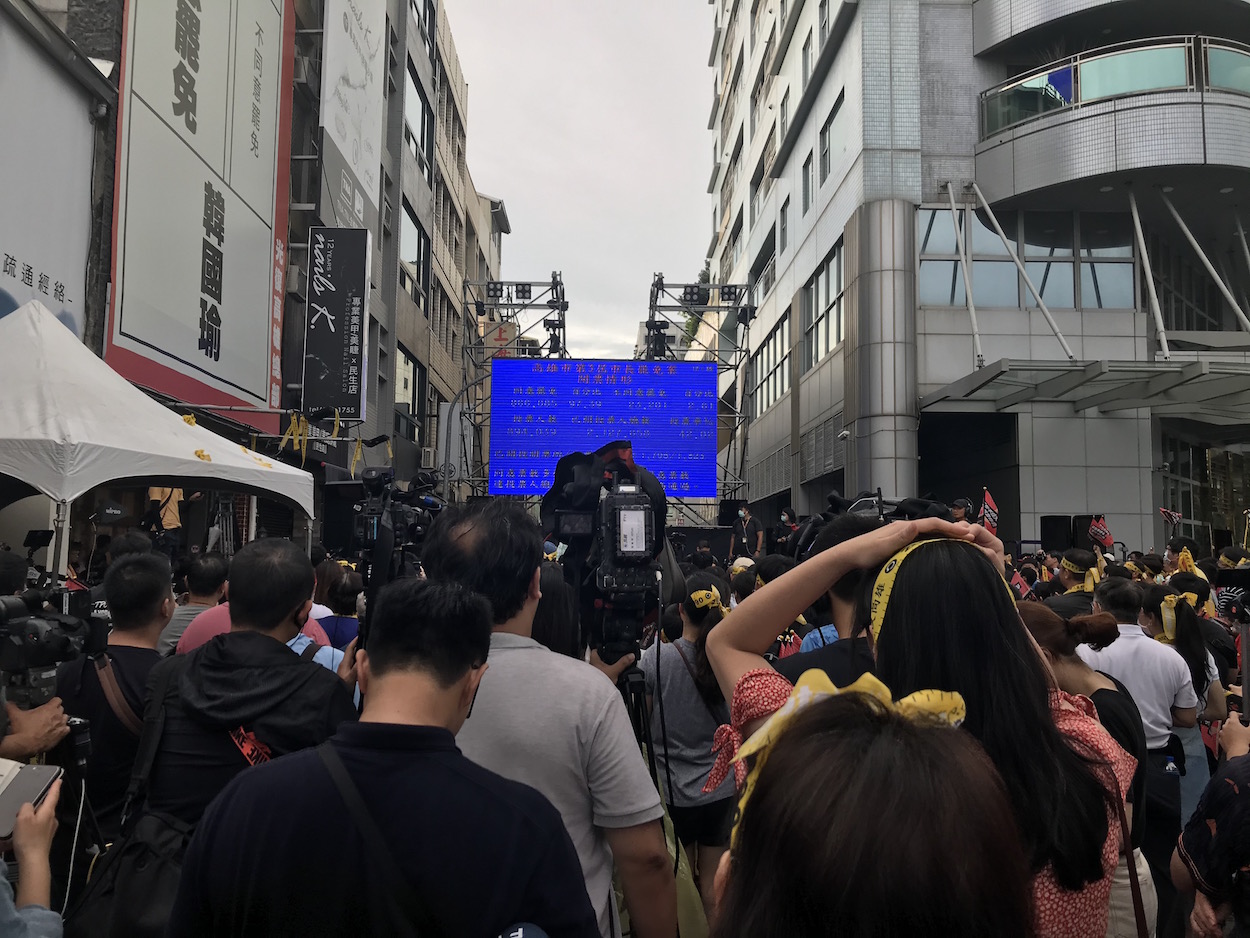 Images from the rally held by WeCare Kaohsiung in front of their headquarters as votes were being counted today. Photo credit: Brian Hioe

It was generally thought that the majority of Kaohsiung voters would be in support of recalling Han. Namely, the second stage of a recall vote required recall organizers to collect the signatures of 10% of the voter electorate, which would be 228,000 signatures in Kaohsiung. Kaohsiung has a total voter electorate of 2,299,981 individuals. However, recall organizers were able to obtain over 450,000 signatures. Likewise, demonstrations calling for Han’s recall in December saw over 500,000 participants, and polling indicated that a majority of Kaohsiung voters disapproved of Han.

But, even if it was known that Kaohsiung voters were likely in favor of recalling Han, it was a question as to whether enough Kaohsiung voters would participate in the recall vote for the vote to be binding. It was questioned as to whether the ongoing COVID-19 pandemic might result in voters being unwilling to go out to vote, though the COVID-19 pandemic is largely under control in Taiwan. Likewise, today saw heavy rain throughout the day, raising further questions as to turnout. Han himself instructed his supporters to not participate in the recall vote. 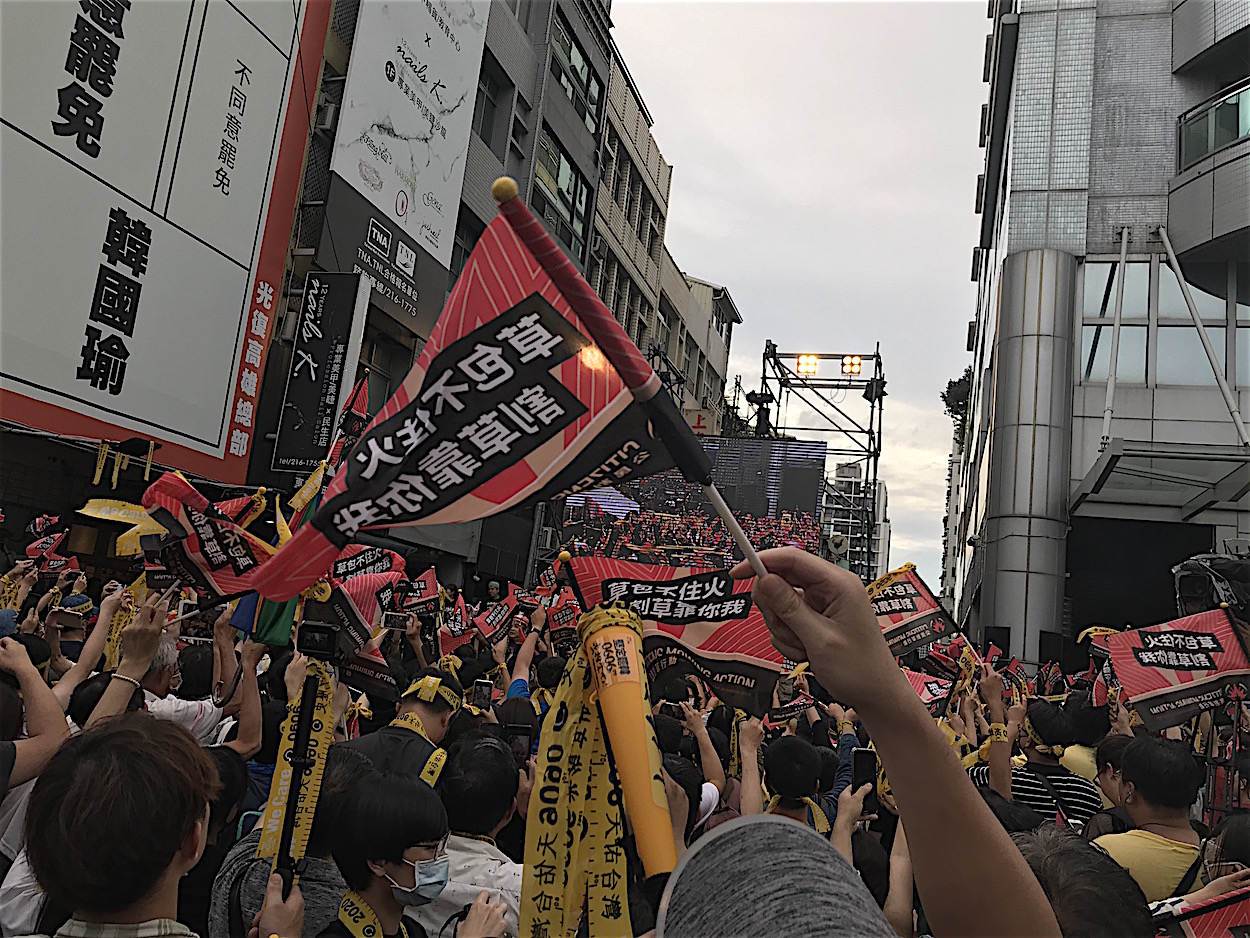 Nevertheless, the results of the vote today were clear approximately seventy minutes after polls closed at 4 PM, with it rapidly becoming clear that the recall vote had reached the necessary benchmark to recall Han by 5:10 PM. At the same time, that so many individuals turned out to vote was surprising. More individuals voted for Han’s recall campaign than voted for him in the 2018 elections.

Han’s election victory in 2018 was a surprise, seeing as Kaohsiung is traditionally thought of as favoring the DPP. Han was elevated from political obscurity to political superstardom overnight and became popularly thought of as an unorthodox candidate that might be able to turn the KMT around at a time in which the fortunes of the party seemed flagging, particularly because of its inability to appeal to young people. As a result, Han became the KMT’s presidential candidate in the 2020 presidential elections.

Yet Han later saw a reversal of political fortunes. Han was defeated by large margins in the 2020 presidential elections, though he did increase the KMT’s vote share by around two million votes compared to 2016 presidential elections. In particular, Han came under fire for poor administration of the Kaohsiung city government, numerous gaffes, and being unable to fulfill unrealistic campaign promises such as constructing a ferris wheel on the Love River or bringing Disneyland to Kaohsiung, and taking three months off as Kaohsiung mayor in order to campaign for president. Han took a conciliatory stance in the past months, apologizing for his failings, and seeking to keep a low profile. 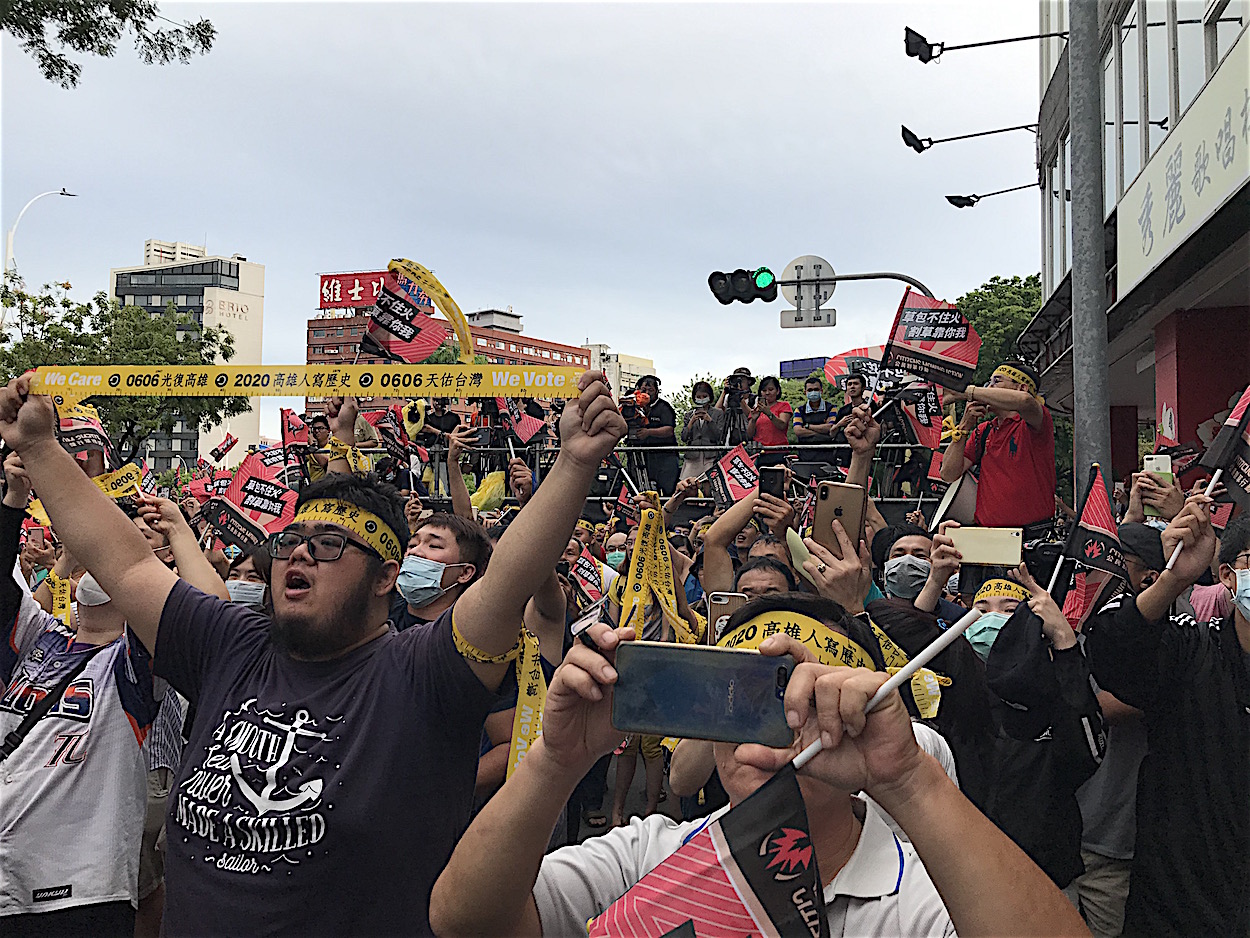 In the wake of an unexpectedly large recall victory, the progressive civil society groups that organized the recall have hailed the victory as a step forward for Taiwanese democracy.

Progressive civil society groups had historically called for the lowering of benchmarks to hold political referendums in Taiwan as a means to recall corrupt, pan-Blue politicians, as most prominently observed in the Appendectomy Project, an initiative that took place after the 2014 Sunflower Movement. But after civil society groups were successful in lowering the benchmarks needed to hold recall votes in November 2016, the first politician to face a recall vote ended up being Huang Kuo-chang of the NPP, a “Third Force” party which had emerged after the Sunflower Movement. Huang was targeted by conservative Christian groups because of his support of gay marriage, but the recall vote was unsuccessful because not enough voters participated in the recall for the vote to be binding. Ironically, the NPP had been among those to call for the threshold needed to hold a referendum to be lowered.

As such, progressive civil society groups have also hailed the success of the recall vote as putting the recall vote to use for its intended purposes. The primary groups that organized the referendum were WeCare Kaohsiung, Citizens Moving Action, and the Taiwan Statebuilding Party, which has grown substantially in southern Taiwan in the past year due to opposition against Han. 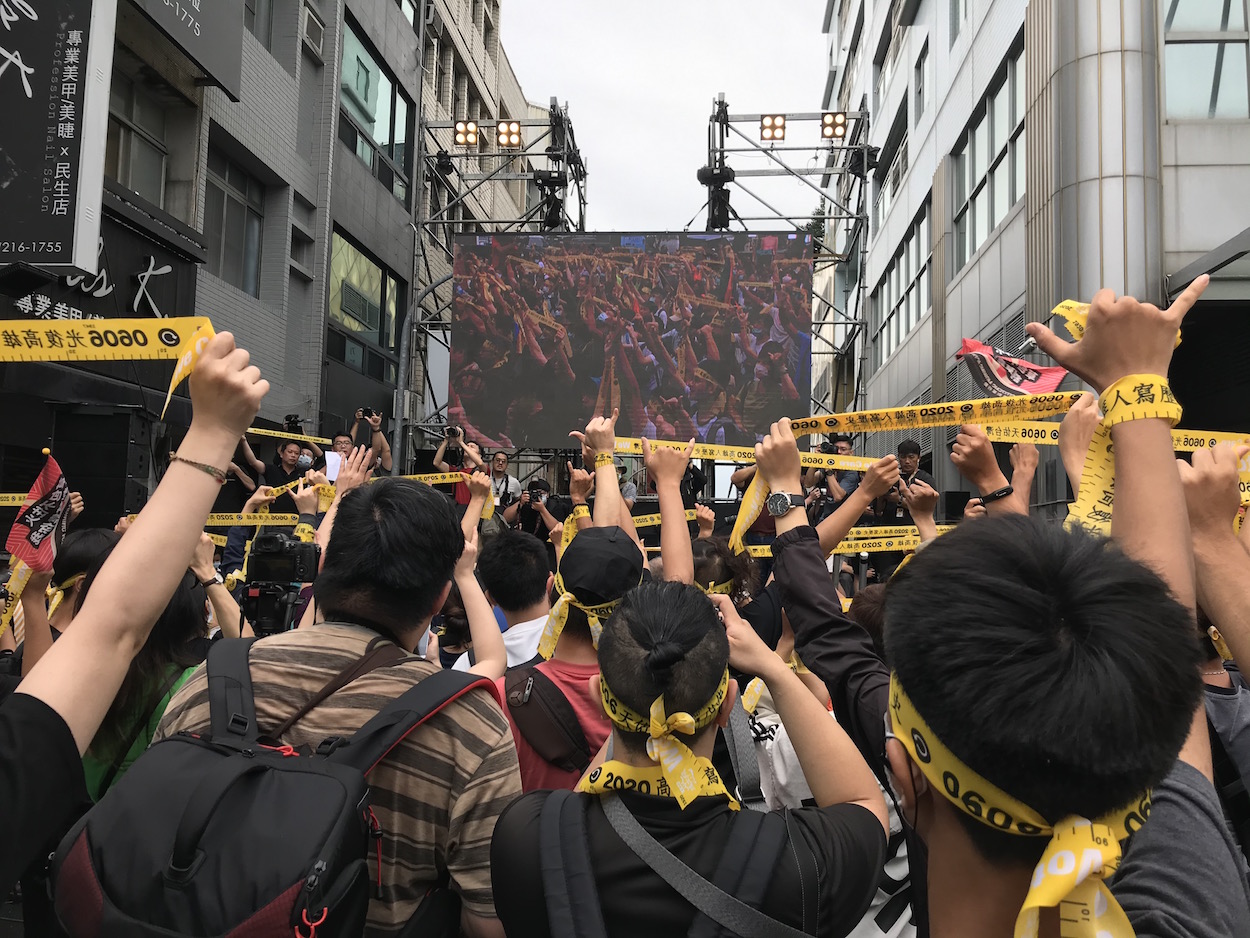 In an international press conference held after the success of the recall vote, WeCare Kaohsiung’s four leading figures, the so-called “Four Gentlemen”, called for Kaohsiung citizens to embrace unity, instead of political division, embracing those who had supported Han rather than rejecting them. WeCare Kaohsiung representatives stated that Kaohsiung citizens should take the high moral ground instead of leveraging political division in the manner of Han Kuo-yu. 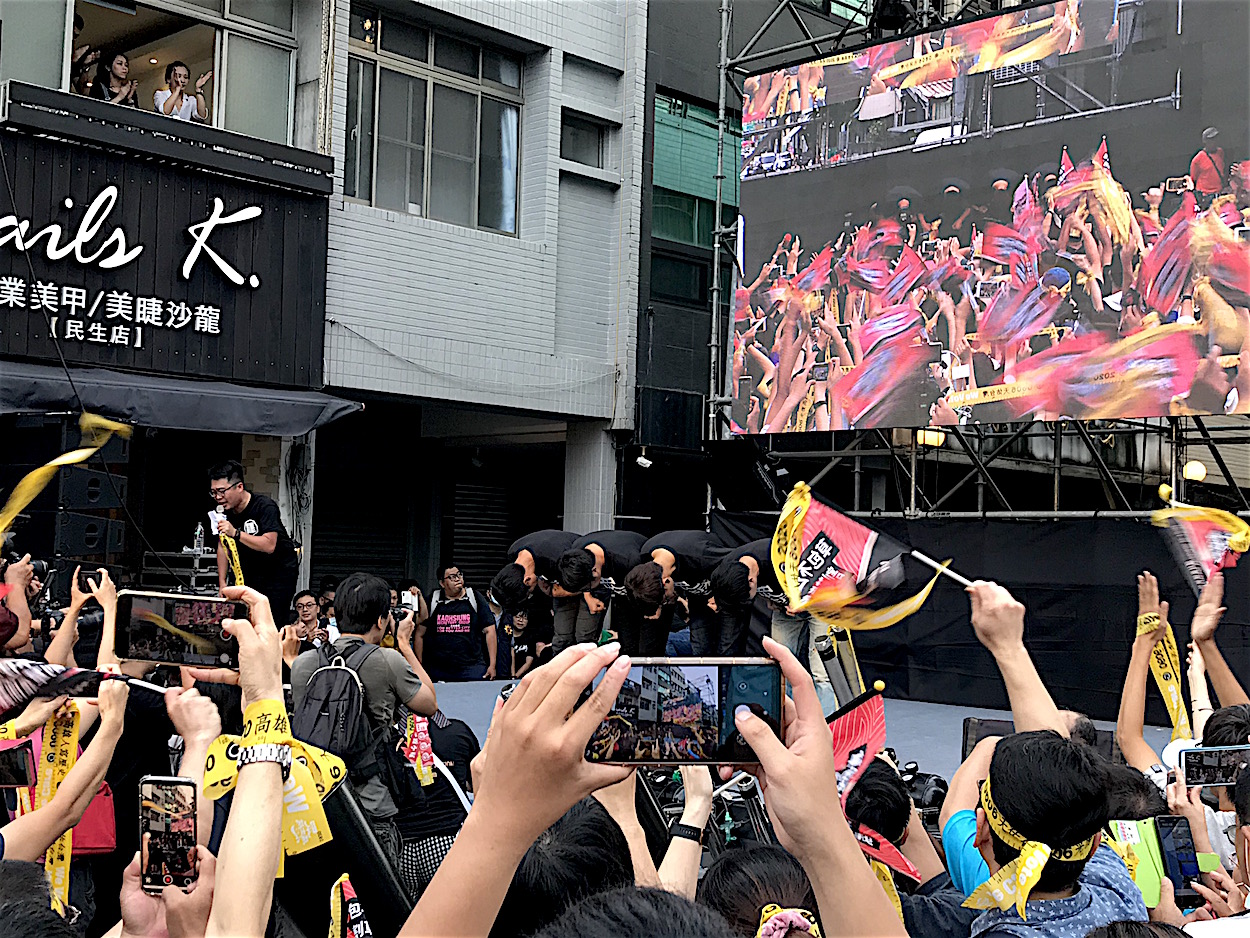 Han held a press conference after it became clear that he had been recalled, thanking supporters. It is possible that Han will try to overturn the results of the recall vote through a legal challenge, assuming that the recall campaign was conducted on illegal grounds. Past KMT politicians such as Taipei mayoral candidate Ting Shou-chung have refused to accept the results of elections in the past by filing legal challenges, something that required a recount of the 2018 Taipei mayoral election.

Yet an unexpected end to the day took place after Kaohsiung city council speaker Hsu Kun-yuan of the KMT was confirmed dead by police in the evening after falling out of his apartment building. His death was possibly a suicide in the wake of the results of the recall vote. Hsu was a political supporter of Han’s and was known to have been ill. Han is likely to politically leverage upon Hsu’s death, particularly if he pursues a legal challenge against the recall vote, or in efforts to rebound by seeking a new position. The KMT is also likely to use the death as political ammunition in a by-election.