TWO DOMESTIC CASES, three imported cases, and zero deaths were announced at the Central Epidemic Command Center’s (CECC) daily press conference today. Both cases today were found in New Taipei and were linked to the Banqiao kindergarten cluster, but were found while in quarantine. The two cases consist of a student at the kindergarten and a parent they live with. 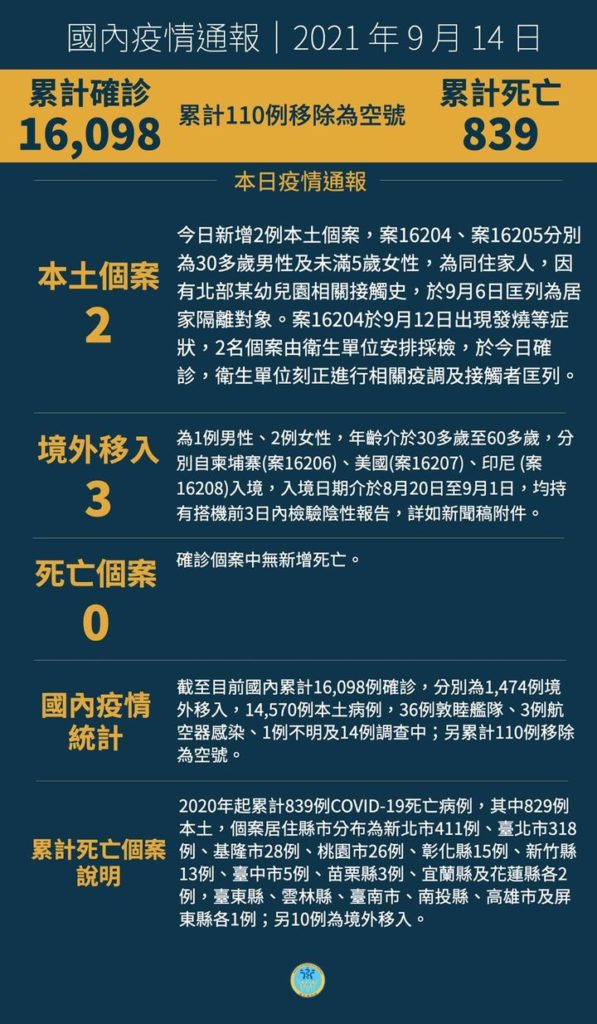 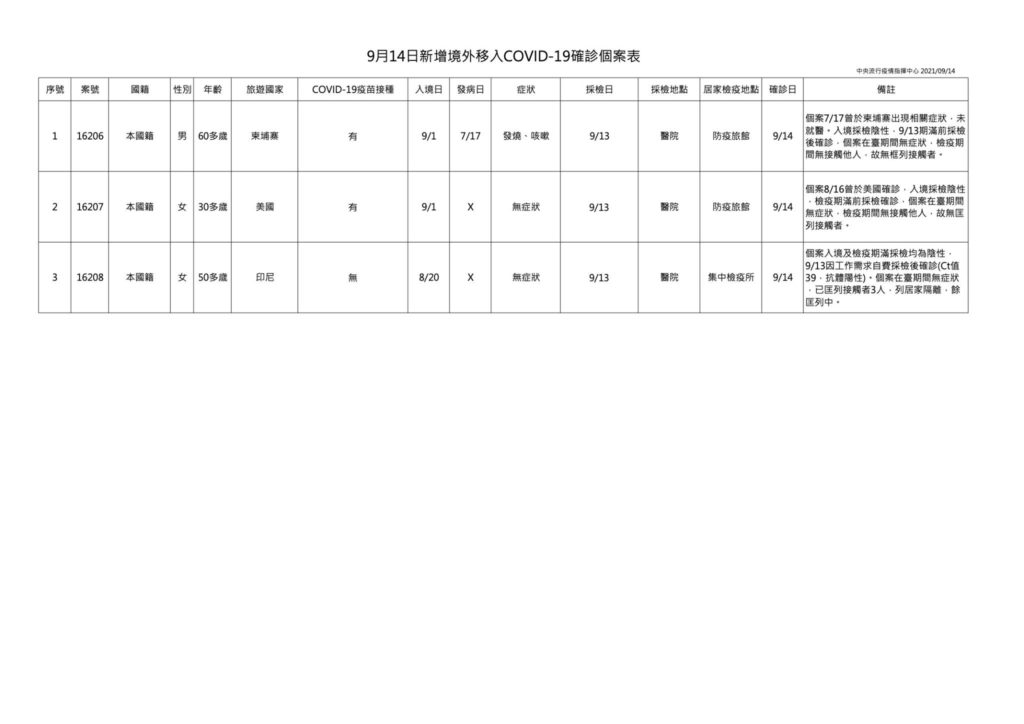 The renovator who was found to have COVID-19 while working in the apartment complex that the Banqiao elementary school cluster spread to and his wife, who lives with him, have been confirmed to have the Delta variant. Genetic testing shows the variants are most similar to imported cases from the US and South Africa, but the CECC does not view this data as sufficient to make inferences about the origin of these cases.

A flight attendant who is part of the Taoyuan pilots cluster has tested negative and has been released from quarantine.

Japan announced a donation of 500,000 vaccine doses of AstraZeneca to Taiwan today. This is the fifth vaccine donation announced by Japan to date.

There may be more options currently available for mixing first dose AstraZeneca and other vaccines, this may currently be the case.

According to New Taipei mayor Hou You-yi, 25, 552 tests were carried out between September 6th and September 13th, which did not result in any positive COVID-19 cases being found. Hou called on the public to continue to be tested, to try and find undetected transmission chains. New Taipei also continues to aim to carry out two days of online classes after BioNTech vaccinations in schools later this month, with the aim of giving students time to rest.

New Taipei confirmed a case in which a confirmed case was not immediately quarantined by their company, but sent back to the company headquarters. Contacts for this case have tested negative. 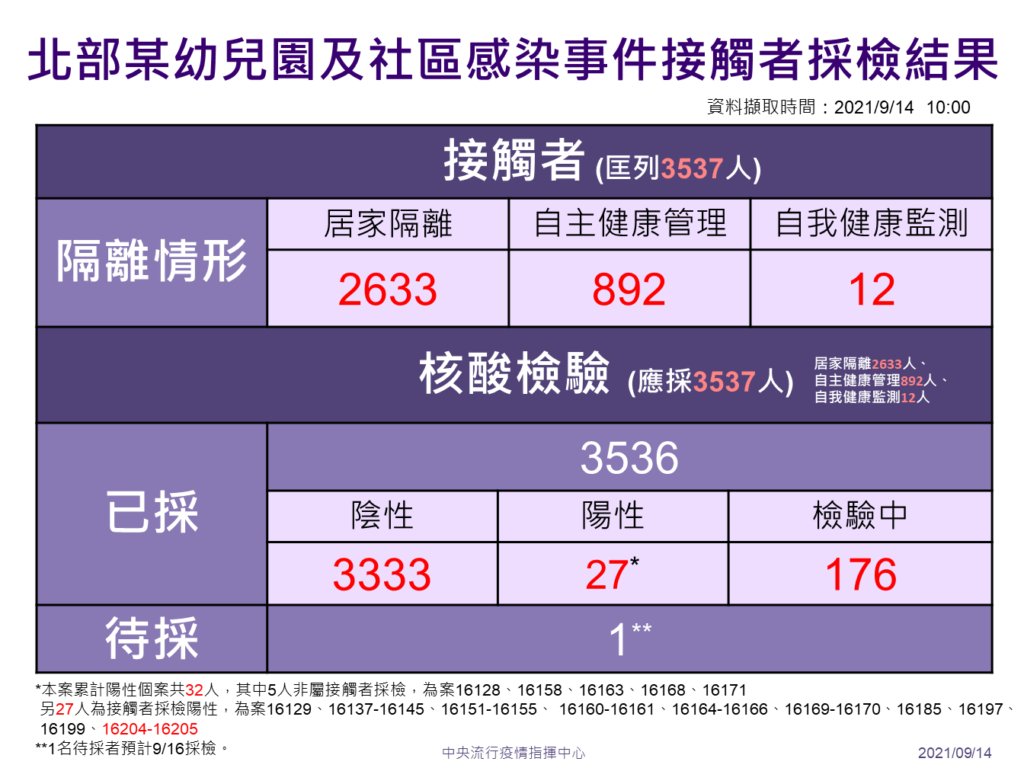 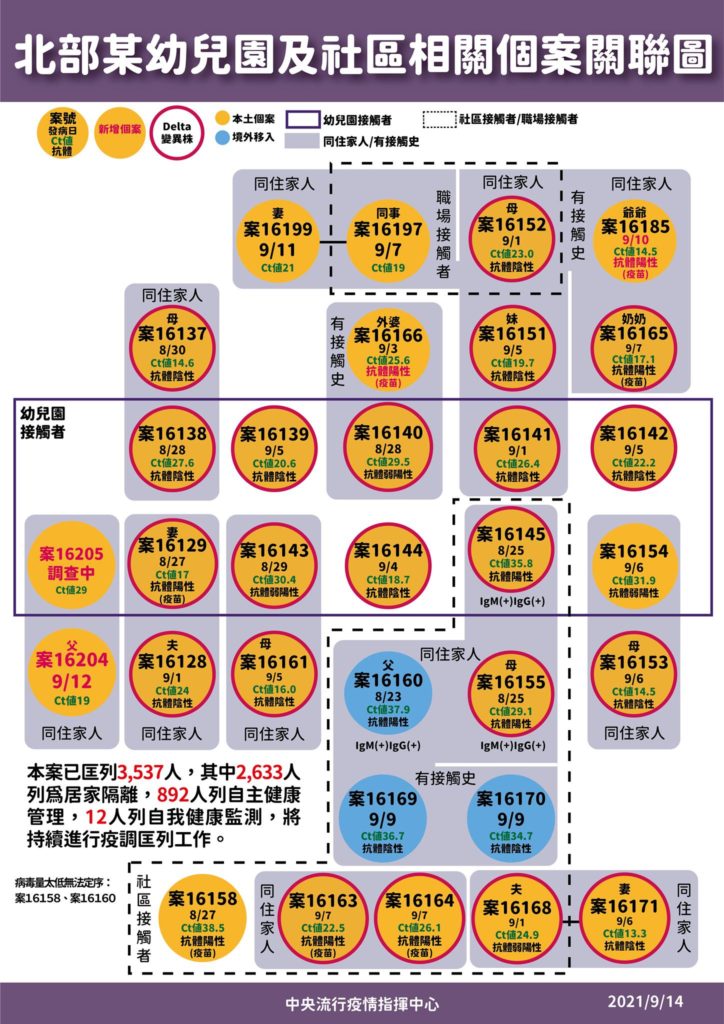 Testing and contact tracing information for the Banqiao cluster. Photo credit: Ministry of Health and Welfare/Facebook

As New Taipei’s suspension of indoor dining is set to last until tomorrow, New Taipei will make an announcement tomorrow on whether indoor dining can resume. Hou stated that public areas in New Taipei are not open to barbecue, with individuals also discouraged from barbecue at home, and urged to comply with CECC regulations.

The CECC has met with airline pilot union representatives in order to address cases in which pilots have been turned away from hospitals, due to fears.

The CECC does not have specific regulations for barbecues over the mid-autumn festival, with local authorities having authority over this.

Some measures may be relaxed on September 20th, when the current level two alert is set to last until. There are no plans currently to strengthen measures.