DPP TAOYUAN city councilor Wang Hao-yu (王浩宇) was recalled last week by large margins. 84,582 voted in favor of the motion to recall Wang, while 7,128 voters voted against the recall. For the recall vote to be binding, 25% of eligible voters, or 81,940 individuals, would have to participate in the vote. 28% of eligible voters participated, resulting in a successful recall campaign against Wang. 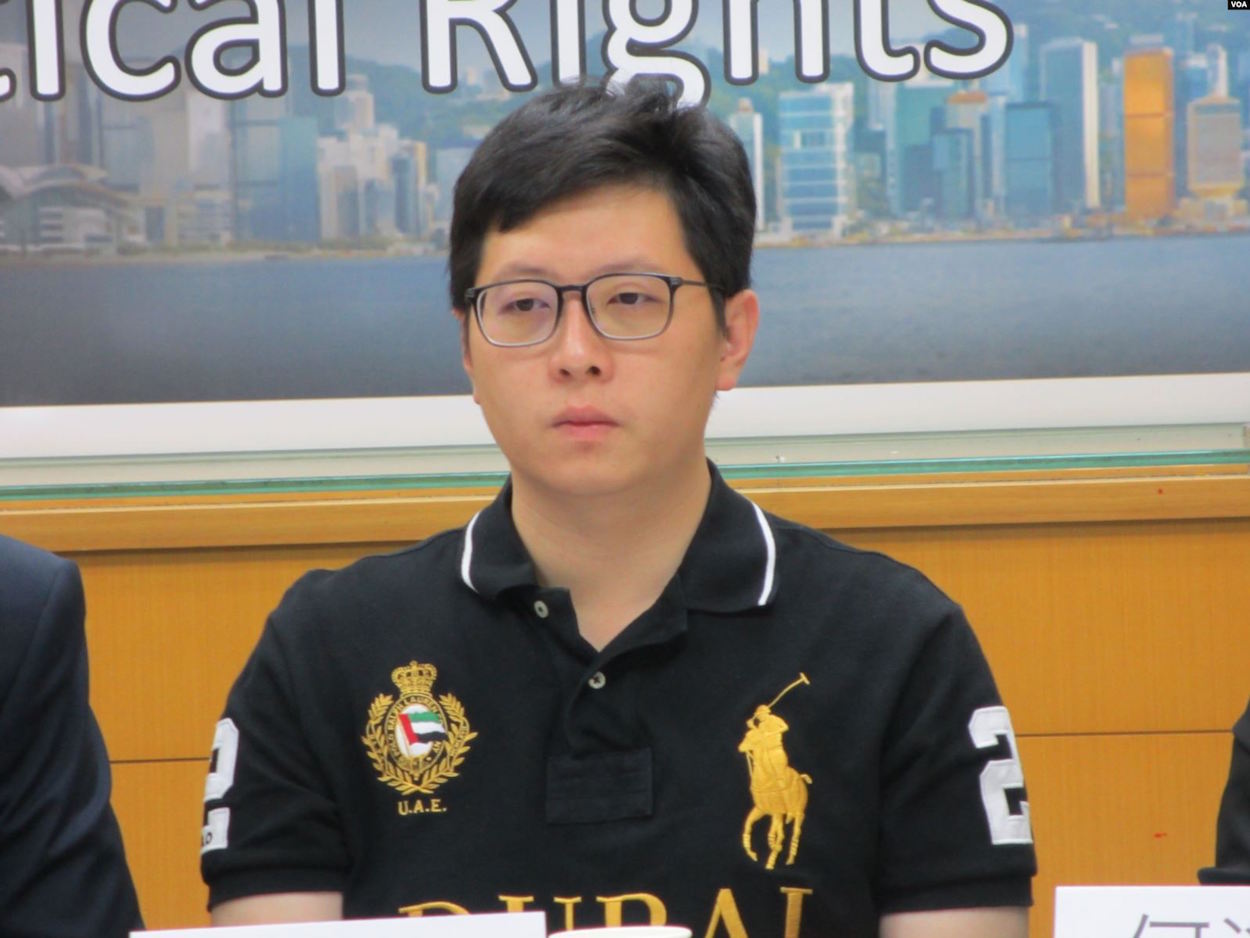 Wang is considered different from other young politicians, however, given the numerous scandals in which Wang has found himself embroiled in. The Green Party saw a revival after the 2014 Sunflower Movement. After the Sunflower Movement, a number of third parties, referred to as the “Third Force” were formed as an attempt to push for a more progressive, pro-independence politics in Taiwan—independent of the DPP and KMT alike, who were seen as both having become corrupt in their years in power. Although the Green Party was an older political party, it also grew after the Sunflower Movement, probably due to the fact that the Green Party in Taiwan was originally formed by members of the DPP that had become dissatisfied with what they viewed as increasing conservatism on the part of the party.

Wang stood out as a Green Party member for his animus against the NPP, the largest of the Third Force parties, and the only one able to gain legislative seats in 2016 elections. Wang frequently attacked party chair Huang Kuo-chang and seized on scandals faced by the party.

This included accusing a NPP party member surnamed Lin of selling drugs. Wang later lost a libel suit for his accusations against Lin for such unsubstantiated claims. More significantly, Wang also was responsible for releasing information that led to the removal of NPP legislator Kawlo Iyun from office on corruption charges. Wang’s frequent criticisms of the NPP have, in turn, been criticized by other younger politicians including independent Taipei city councilor and YouTuber Froggy Chiu, who accused Wang of targeting the NPP simply for the purpose of trying to expand the Green Party’s vote share.

After Wang departed the Green Party, he later alleged that Chang Yi-han, a central committee member of Ko Wen-je’s Taiwan People’s Party (TPP) and former DPP youth section director, had met with the DPP to discuss means of cooperation aimed at marginalizing the NPP and allowing the TPP to win seats in legislature. The Green Party and Taiwan People’s Party both denied that any meeting aimed at tentative cooperation had taken place, though Chang was later expelled from the TPP. 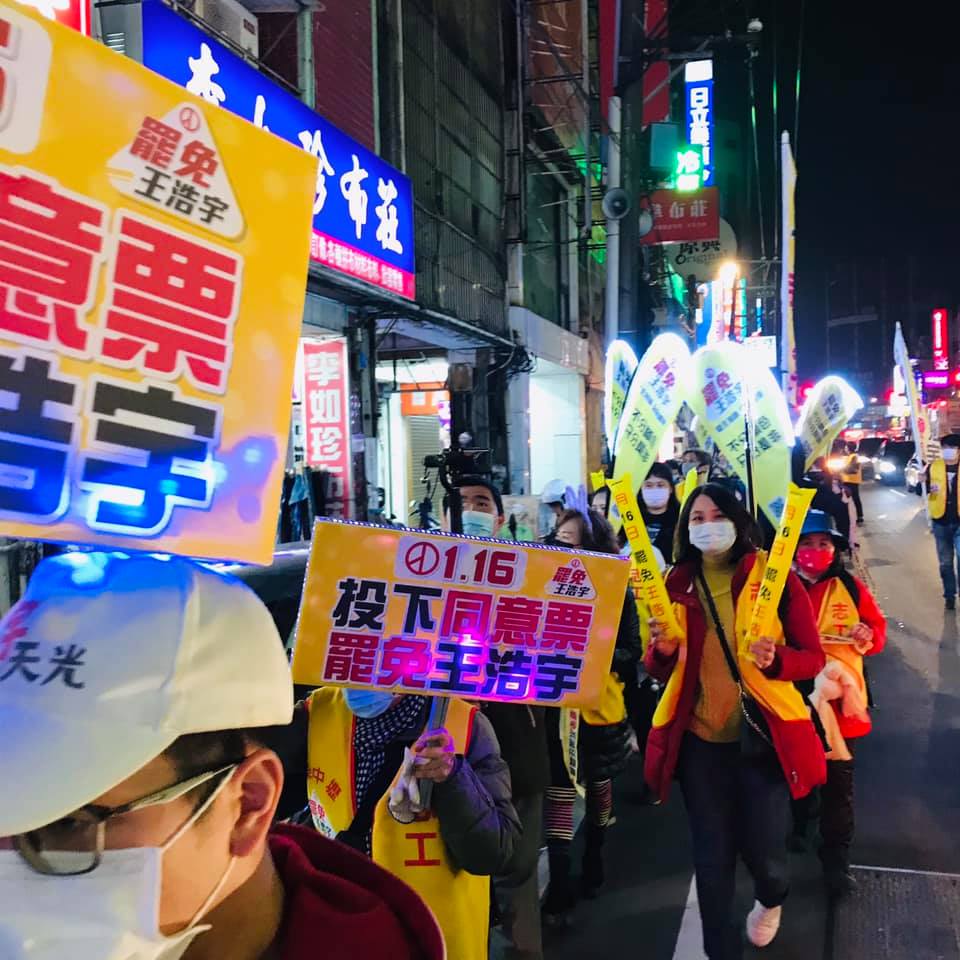 Demonstrators in favor of the recall against Wang. Photo credit: 罷免王浩宇/Facebook

Indeed, Wang has come under scrutiny many times because of dubious allegations made by him. Sometimes this has included outright disinformation, such as claiming that purported Chinese spy Wang Liqiang was not using his real name publicly, but a pseudonym. Wang has faced scandals regarding cyberbullying, discriminatory comments against indigenous, and homophobic statements, putting him at odds with other youth politicians, who are more often progressive in their political orientation and have a background in activism.

It is thought that Wang was recalled by such large margins as retribution for the successful recall of Kaohsiung mayor Han Kuo-yu. In the years prior to and after the Sunflower Movement, youth activists called for the lowering of benchmarks to recall politicians, to allow for the removal from office of corrupt pan-Blue politicians. eventually proving successful in lowering the benchmarks needed to carry out recall votes in November 2016.

Though NPP legislator Huang Kuo-chang was the first politician to face a recall vote in 2017 for his support of gay marriage, the recall vote against Huang did not meet the benchmarks needed to be binding. After his defeat in the 2020 presidential elections, Kaohsiung mayor Han Kuo-yu became the first politician to be recalled under the new recall rules. Han, too, was recalled by large margins, with 939,090 votes in favor of his recall and 25,051 votes against his recall, out of a total of 969,259 individuals that voted. 42.14% of Kaohsiung’s voter electorate participated in the recall though, again, only 25% would have needed to participate for the recall to be binding. 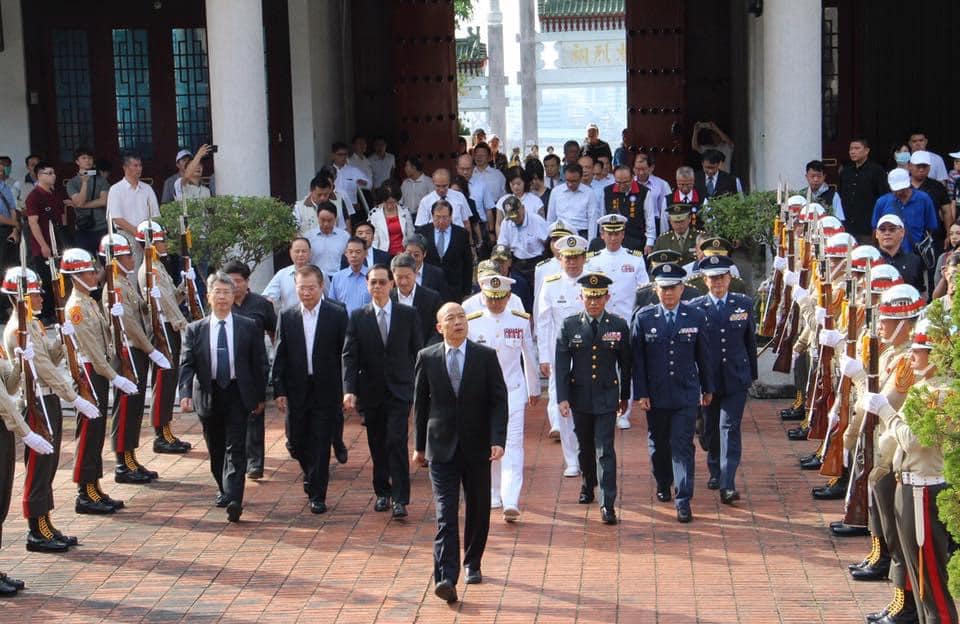 Much anger from the pan-Blue camp was directed against Wang after he mocked the death of Kaohsiung city council speaker Hsu Kun-yuan of the KMT, Hsu having apparently leaped to his death from a building after Han’s recall defeat. This resulted in 200 individuals protesting outside of Wang’s offices in June; this was hardly the first time that Wang had mocked the deaths of pan-Blue politicians either. However, despite being quick to offer condolences after Hsu’s death, unlike Wang, Huang Jie currently also faces a recall vote, which is set to take place on February 6th.

Following the recall of Wang, as with after the successful Han recall vote, questions have been raised as to whether recalls will be used to target other politicians. This could particularly affect younger pan-Green politicians whose political careers began in the wake of the Sunflower Movement, seeing as many Third Force politicians ran and won office in election districts that traditionally skew pan-Blue, including Wang. It is generally thought that it is easier to recall politicians than to elect them, raising the possibility of frequent election results being overturned in the future, or waves of “revenge” recalls targeting organizers of successful recall campaigns.

One also notes that Wang’s recall may be reflective of a broader pattern of public backlash against politicians that do not focus on the issues facing their local constituency, but instead are constantly drawn into national-level scandals.

While Wang was recalled in traditionally pan-Blue Taoyuan, one notes that Taoyuan mayor Cheng Wen-tsan of the DPP is one of the most popular mayors in Taiwan at present. As with other popular mayors, such as New Taipei mayor Hou You-yi of the KMT, Cheng’s popularity is often thought to be because of his focus on local issues facing Taoyuan, rather than grandstanding on national issues in order to secure higher office, such as angling for a future presidential bid. Backlash over the last year against Taipei mayor Ko Wen-je, who previously was considered Taiwan’s most popular mayor, is thought to be because of Ko’s excessive preoccupation with national issues, and frequent involvement in national controversies, rather than focusing on local governance. 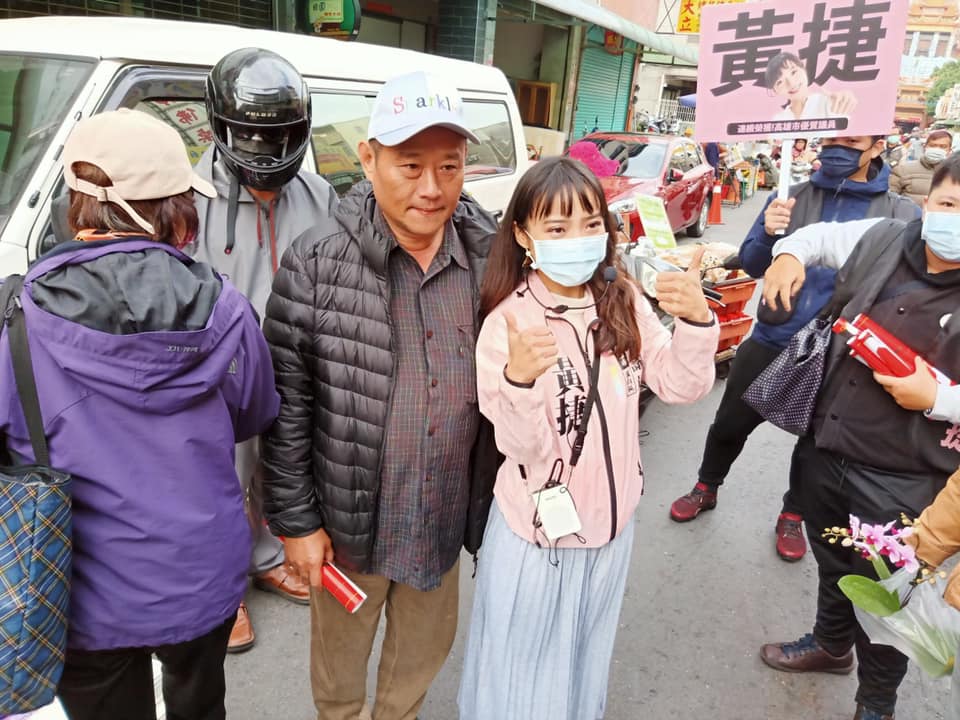 Alternatively, it may be that the populist style of politicians such as Han and Ko, both known for frequent controversy and whose popularity was sustained despite—or perhaps precisely because of politically incorrect comments—is no longer in vogue in Taiwan.

Indeed, as distinguished from other younger politicians, one notes that Wang’s political style closely resembles that of Han and Ko because of his frequent controversies. As such, younger Third Force politicians with different political stylings, including Huang Jie and Chen Po-wei, may not, in fact, face danger from recall votes. One also notes that Huang Jie is up for recall in historically pan-Green Kaohsiung, despite the aberration of the Han mayorship. In the wake of Wang’s recall, the recall vote facing Huang will be another litmus test of how easy it is to recall politicians after the changes to the recall vote originally made in 2016, then.

The recall vote facing Huang will also be seen as a referendum as to the future prospects for young politicians in Taiwan, particularly within the pan-Green camp. One notes, for example, that the DPP recently passed over Enoch Wu as its Taipei mayoral candidate for 2022, with Wu instead slated to run again for legislature after his failed 2020 bid. It is thought that because the DPP decided not to run Wu because he had never won political office before and was not seen as having enough experience to run for mayor. But if Huang is recalled, this will be perceived as the start of a wave of young politicians facing recall campaigns, dampening the prospects for youth participation in electoral politics in Taiwan as a whole.