Working the Land with Land Dyke

The following is part one of a two-part article. Part two, which can be read here, consists of an interview with Land Dyke members.

WEEDING THE RICE paddy at 6 AM. Eating at a vegan cafe that showcases local art. And now, sitting in their bookstore that functions as a community space for queer student organizers. Throughout my days with Land Dyke, we moved between worlds that I once subconsciously viewed as separate, the result of a lifetime of being taught to view Taiwan one-dimensionally. Positioned at a complex intersection, Land Dyke embodies wholeness.

Land Dyke is a group of six women collaboratively farming in Shen Gou Village outside of Yilan Township. Their Mandarin name is 土拉客 (tu la ke), which contains many meanings including “using the land to greet people,” “trucks,” and “lesbians on the land.” They use organic farming practices to grow rice, oranges, persimmons, apples, and kumquats, and make various alcohols and chili sauces. Their paper packaging shows a woman, colored in rainbow, harvesting plants from the earth. Their vision and practices have changed over the years since the cooperative’s conception in 2011. Starting out following a vision of being a queer chosen family and living together in one house, they have since transitioned to living separately as three couples. Members of the cooperative have personally engaged in local politics and activism, such as supporting local working-class mayoral candidates running against real estate developers. However, Yenling stresses in our interview that they want to let their actions speak for their thoughts, instead of vice versa. 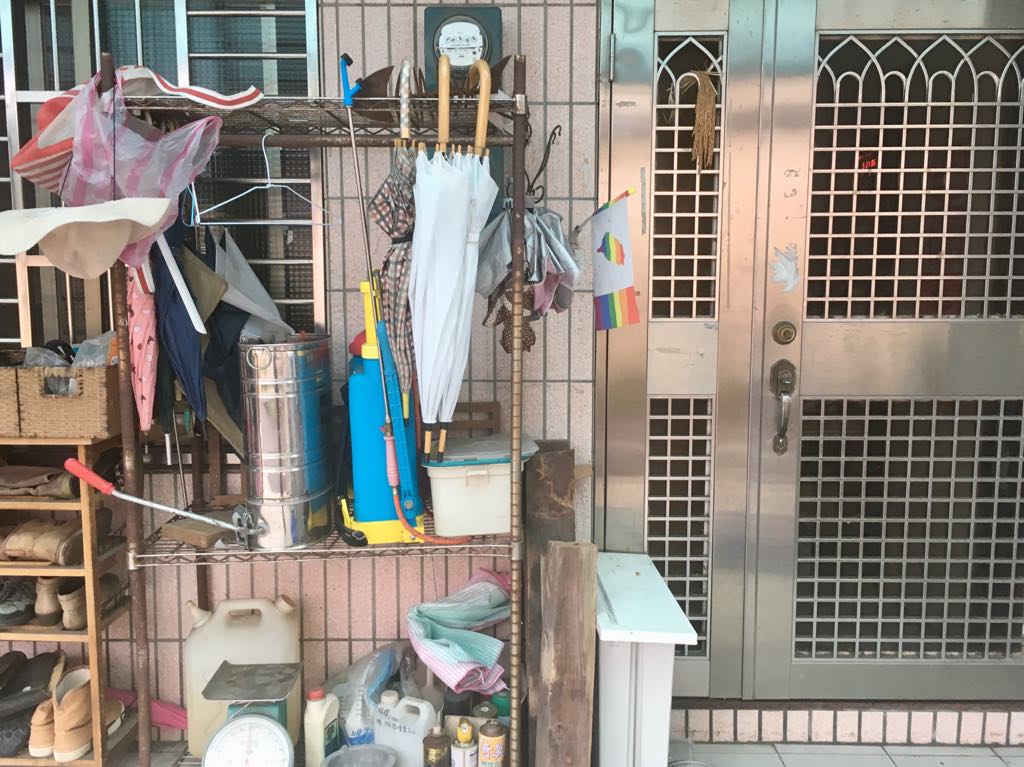 Each day follows a common rhythm for the members of Land Dyke. We wake up early to start working in the field—Yenling tells me that she normally wakes up before 6 am, but shifted her schedule a little later for my sake, and I am grateful. Tending to the fields must happen every day, and the best time to do it is before it gets too hot to work. As we cut weeds, knee deep in mud, Yenling greets and has a short conversation with each farmer that rides by: “How’s your field? Have the snails come back?” It reminds me of the comfortable banter Shawn had with the waiters and restaurant owner last night at dinner; it is clear that the women of Land Dyke are embedded members of the community. Later that day, I also find photos of other Land Dyke members in a zine about local farming as I peruse a local bookshop. The closeness of the community in Shen Gou Village benefits all residents. Shawn and Yenling explain that besides sharing produce with the rest of Land Dyke, they also often make trades with other farmers so that everyone in the village can have a varied diet without needing to buy much from markets. Although the women of Land Dyke no longer all live together, they still convene regularly at one of their homes to discuss how their fields are doing, coordinate sales and plan future plantings. Beyond farming, the individual activities of the Land Dyke members diverge, including working with indigenous groups and teaching classes at National Chiao Tung University.

Driving from the farm to the Yilan train station, the sudden transition between the friendly community in Shen Gou Village to weekend homes and sterile office buildings reflects rapid shifts in Taiwan’s rural areas. Yenling explains that the relaxing land use policies have led to the phenomenon of “luxury farmhouses,” in which real estate developers exploit loopholes to sell weekend homes to city residents built on land technically allocated for farmers. This has caused a sharp rise in the cost of land in rural Taiwan, especially Yilan which is just an hour away from Taipei through the Xueshan Tunnel. The increasing real estate prices make it extraordinarily difficult for small farmers to buy land, and farmers who have inherited family farmland are often pushed to sell by developers. Thus, small farming communities like Shen Gou Village are destabilizing, and many youths end up moving away to find work in the city.

Our conversation in the car triggers childhood memories of Toucheng, Yilan. I remember watching the several plots of farmland behind the condominium turn brown with lack of use, and then the “For Rent/Sale” signs went down and construction started. Massive bed & breakfasts, apartments, and condominiums sprouted upward around 2012, extravagant and plastic-looking. One of the buildings was bright pink, and another looked like a Disney castle; a McDonalds appeared, and optimism about Toucheng becoming a bustling tourist hub was in the air. But the buyers never came. Now, most of the houses stand empty, like a miniature ghost town, but of course, the soil is now ruined and the farmers cannot come back. Although as far as I know, my family’s apartment is not a luxury farmhouse, we too were part of the flood of city dwellers, tourists, real estate developers and speculators that entered Yilan a decade ago to devour the land. I ask Yenling whether the lukewarm success of the luxury farmhouse model will cause speculators and developers to back off. No such luck; she says that they usually buy even more land, hoping to make their money back. The rows of garish unoccupied houses behind our home are a monument to the aggressive capitalism shaping rural Taiwan and reflect the emptiness at its core.

Brooding about environmentally destructive urbanization easily turns into the glorification of history. Campaigns for land reform and environmental justice often revolve around the idea of the “family farm,” symbolizing both victims of a capitalist system that favors commercial farming and an ideal past to return to. However, Land Dyke is right to ask: Who is the “family” when we talk about family farms? In our interview, Shawn mentions that when they first started farming, their neighbors would ask why they were farming alone as women and when they were going to find husbands. An ecological movement that is misogynist or heteronormative does not serve everyone and thus cannot succeed. 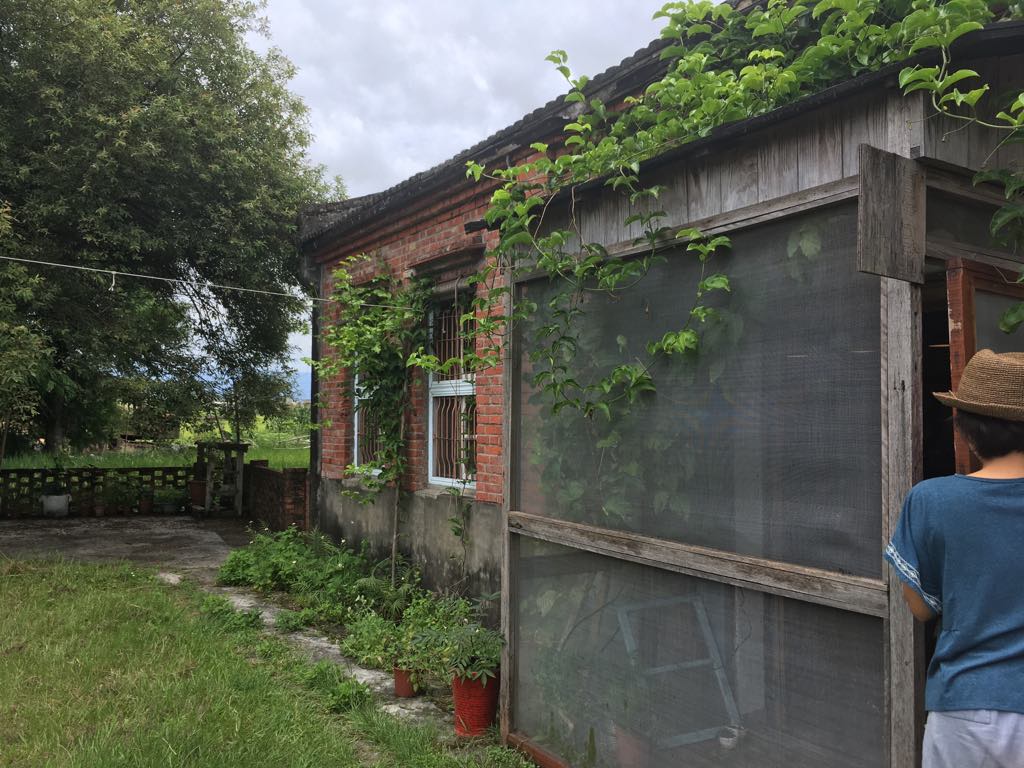 On the flip-side, gender and LGBTQ movements also typically ignore rural or environmental issues or are environmentally destructive themselves. For example, “in Taiwan pride parades… there are always so many disposable items,” Yenling shares.  Media representations of LGBTQ people are heavily urban-focused, highlighting bars, nightclubs, cafes, and urban pride parades. In the U.S., rural areas are only part of queer narratives in stories about closeted, oppressed LGBTQ youth growing up in small towns that move to the big city as soon as they reach adulthood. Despite international and Taiwanese media’s focus on Taipei, LGBTQ people outside of cities exist and are developing different modes of community organizing.

Some past media coverage has fetishized the group as an anomaly, emphasizing that “they’re queer and they farm and…” However, Land Dyke is firmly situated in national and global shifts surrounding identity and livelihood. Walking around Shen Gou Village, it’s clear that many young people from diverse professions and backgrounds are becoming interested in agriculture, both in addition to other jobs and full-time. I hear the phrase “Wen Qing Shao Nian” tossed around often, which refers to a new generation nostalgic for farming and peasant culture. Describing their experiences at International Peasant Conferences, Yenling shares that small farmers have a long history of fighting for change, and that there are diversity and justice efforts within the movement as well. A quick web search easily turns up other women’s’ and LGBTQ-themed farming groups in the United States and other countries. In my social circles of young queer people of color in both the U.S. and Taiwan, we often talk about wanting to connect more with the land. Many friends have pursued WWOOFing, or World Wide Opportunities on Organic Farms. As we become more disillusioned about global capitalism and the sustainability of high-consumption lifestyles, it makes sense that many of us, especially those most disenfranchised by economic systems, look for different ways to live.

Intersectionality, a concept developed by Kimberlé Crenshaw, focuses on the connections between forms of oppression and the uniqueness of each intersection. “It’s important to have a complex sense of movements wherever you are,” Yenling expressed. Truly moving forward requires collaboration between social movements, and the members of Land Dyke know and practice this every day.