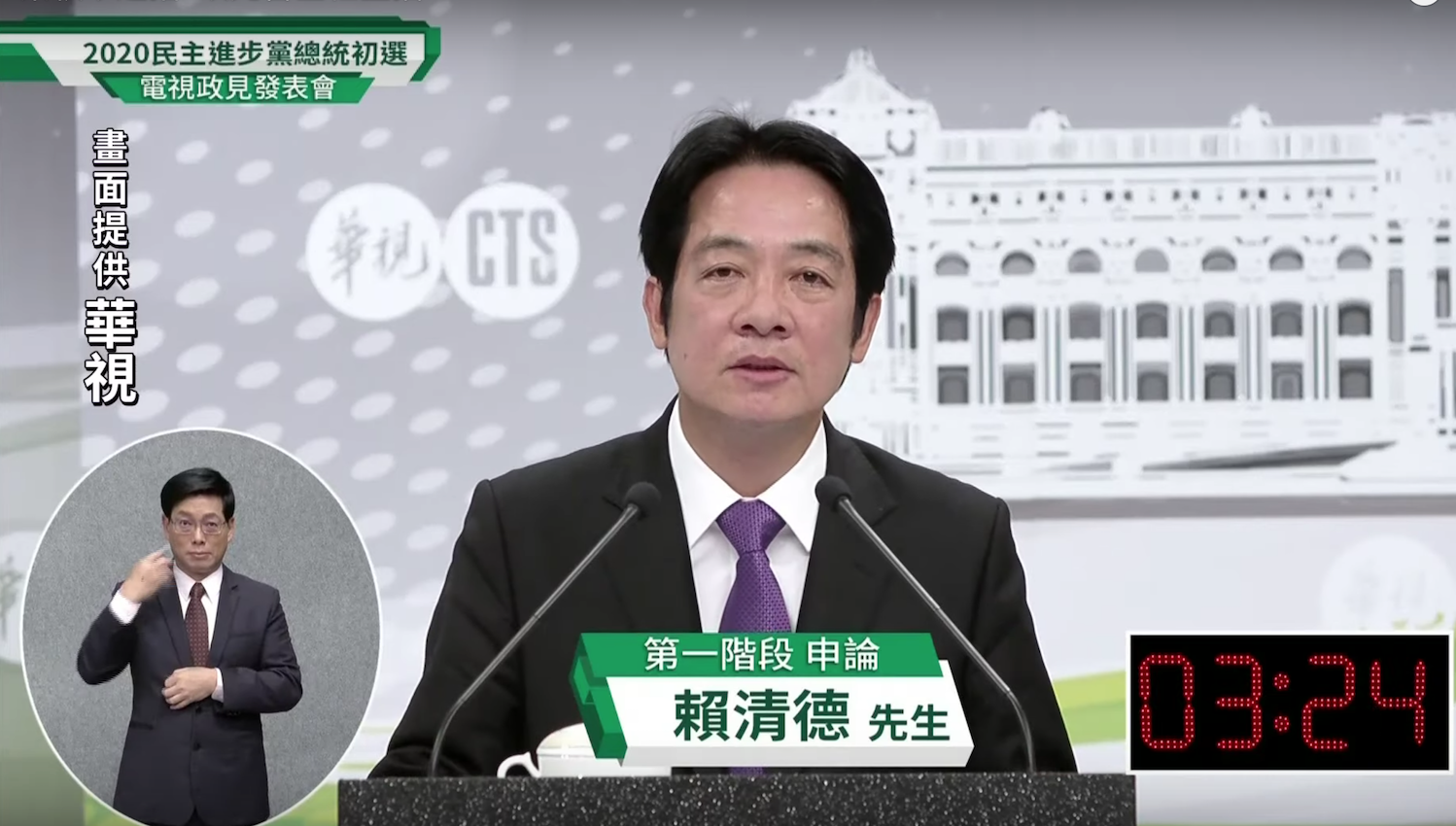 William Lai during the debate. Photo credit: Next TV

Although William Lai previously served as premier under Tsai, Lai is challenging Tsai for the DPP’s presidential nomination in 2020 elections. Lai had long been rumored to have ambitions contest Tsai for the DPP’s presidential nomination in 2020. Tsai naming Lai as her premier was likely an attempt to co-opt Lai and neutralize him as a possible threat. But Lai indicated that he was willing to break with Tsai shortly after the DPP’s defeats in 2018 nine-in-one elections, after which Tsai resigned as chair of the DPP.

While Lai could have positioned himself as a natural successor to Tsai in 2024, Lai likely fears possible competition from other contenders from his generational cohort within the DPP. Hence his current challenge to Tsai, which is backed by pan-Green traditionalists who are less socially progressive than Tsai, who are more emphatic on the issue of Taiwanese independence, and who do not see Tsai as having taken enough steps to realize Taiwanese independence.

Nevertheless, what may surprise is that for the most part, sparks did not fly during the debate this afternoon, with Lai emphasizing his credentials on the basis of what he claimed was the need for strong leadership within the DPP, but refraining from any mudslinging against Tsai, and generally being rather restrained in his criticisms.

It is likely that Lai was prevented from doing so because of strong public backlash against supporters of his, such as pan-Green billionaire Koo Kwang-ming, for their forceful and outspoken misogyny against Tsai. Koo has a long history of misogynistic comments against Tsai, most recently provoking outrage for sexism in referring to Tsai as Taiwan’s “national mother” yet calling on her to step aside in favor of Lai. Pan-Green traditionalists backing Lai have often been accused of primarily disliking Tsai simply because they cannot stomach the thought of a woman being Taiwan’s president.

As such, what emerged from the debate was primarily the fact that neither Lai nor Tsai’s political platforms substantially differ, it simply is that both are supported by different demographics and factions within the pan-Green camp. Neither proved particularly forceful in the debate and both broadly spoke of the same policy needs, pointing to the need to strengthen national defense, to counter Chinese efforts at politically influencing Taiwan, to address low salaries and lack of opportunities faced by young people, and to stimulate entrepreneurship. 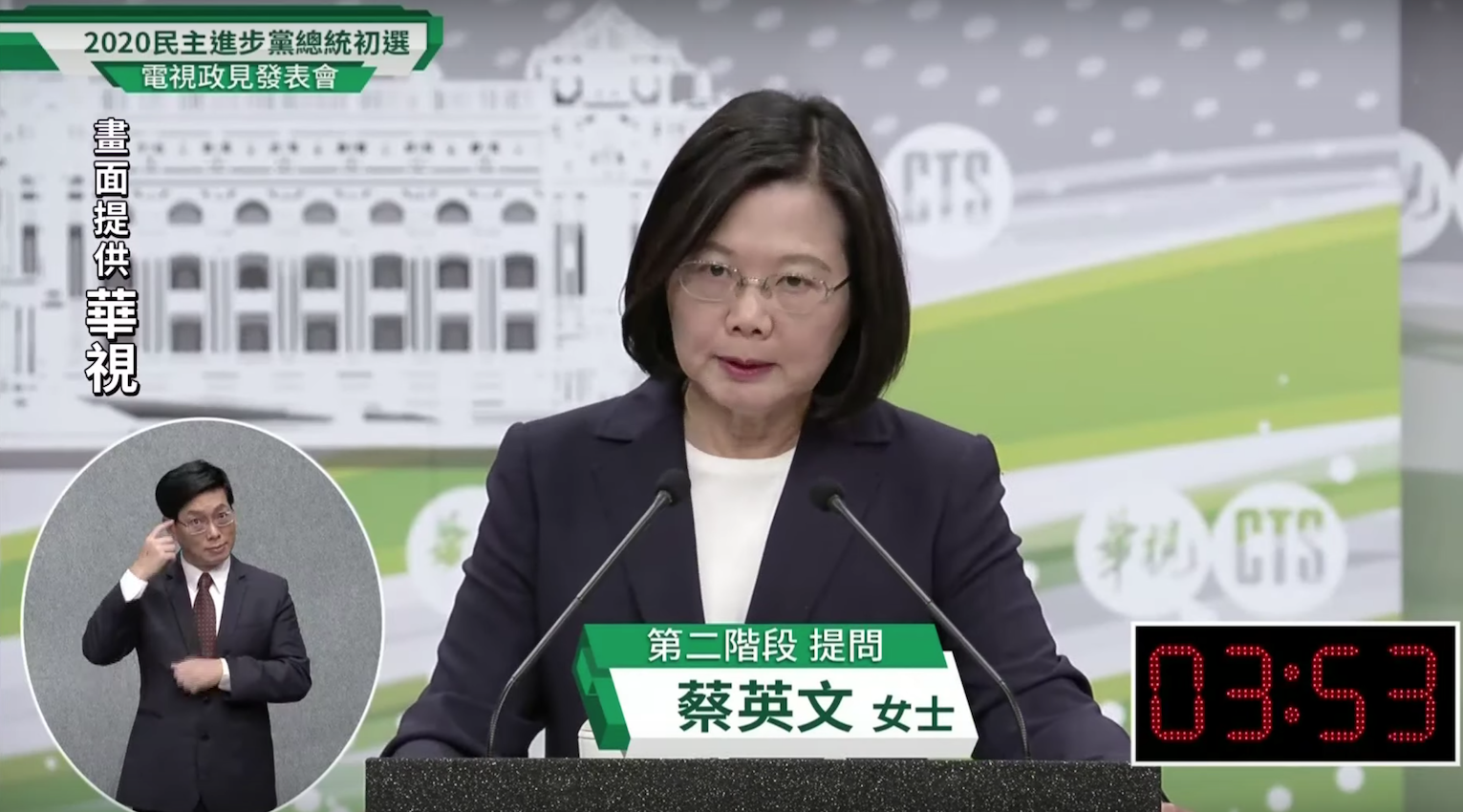 Tsai Ing-wen during the debate. Photo credit: Next TV

Both also evidenced what was fundamentally the same geopolitical worldview in speaking of the US-China trade war as an opportunity to lure taishang back from China, never mind that it is more likely that taishang would move factories currently based in China to southeast Asia, and to build closer ties with America and other Asia-Pacific through signing FTAs inclusive of the CPTPP.

To this extent, while Lai is supported by pan-Green traditionalists more emphatic on Taiwanese independence, when Lai and Tsai were questioned by Lai Chung-chiang on their stances on whether they saw Taiwan as an independent country, both sought to sidestep the issue. Though Lai seems to retain the faith of pan-Green traditionalists strongly in favor of independence, Lai currently claims that he views Taiwan as already being an independent country, having been flip-flopped on the issue several times. In past years, Lai went from claiming to be a “Taiwanese independence worker” while mayor of Tainan, to causing controversy when premier by claiming it was possible to “show an affinity toward China while loving Taiwan.”

Notably, neither offered any truly convincing explanations for as to the DPP’s defeats in 2018 nine-in-one elections or any clear vision as to what adjustments in course the DPP should make to avoid being defeated in 2020—something that should be worrying to those within the pan-Green camp. Lai primarily backed his argumentation on that the DPP should change horses at this stage in the game. Tsai, on the other hand, cited her policy successes to date as the basis for who she should be allowed to run again, claiming that she had accomplished successes no other Taiwanese president had in advancing transitional justice, pushing for the New Southbound Policy, and navigating the turbulent waters of the US-China trade war.

It should not surprise that the debate revealed a lack of any clear political difference between Lai and Tsai. Lai was, after all, part of Tsai’s administration until just half a year ago.

Indeed, Lai’s challenge to Tsai for the DPP’s presidential nomination was surprising to many because it is unusual for an incumbent to be challenged from within her own party. Many raised fears after Lai announced his challenge that this challenge could split the DPP vote in a way that could contribute to the party being defeated again in 2020. To this extent, Lai’s performance today in the debate seems to indicate no difference from Tsai in political program or even political style, raising questions about on what grounds Lai offers any alternative to Tsai.

It is to be seen whether the debate will influence those who were undecided between whether to vote for Lai or Tsai. Yet it should probably be clear that Lai supporters will continue to back Lai to a hilt. Lai supporters will, in fact, likely break with the DPP if he loses the presidential primary. Namely, despite the fact that most academic election polling includes cell phones at this point, seeing as younger and higher-educated voters tend to be underrepresented in polling conducted only using landlines, Lai alleged that including cell phones was a means of attempting to rig primary polling. 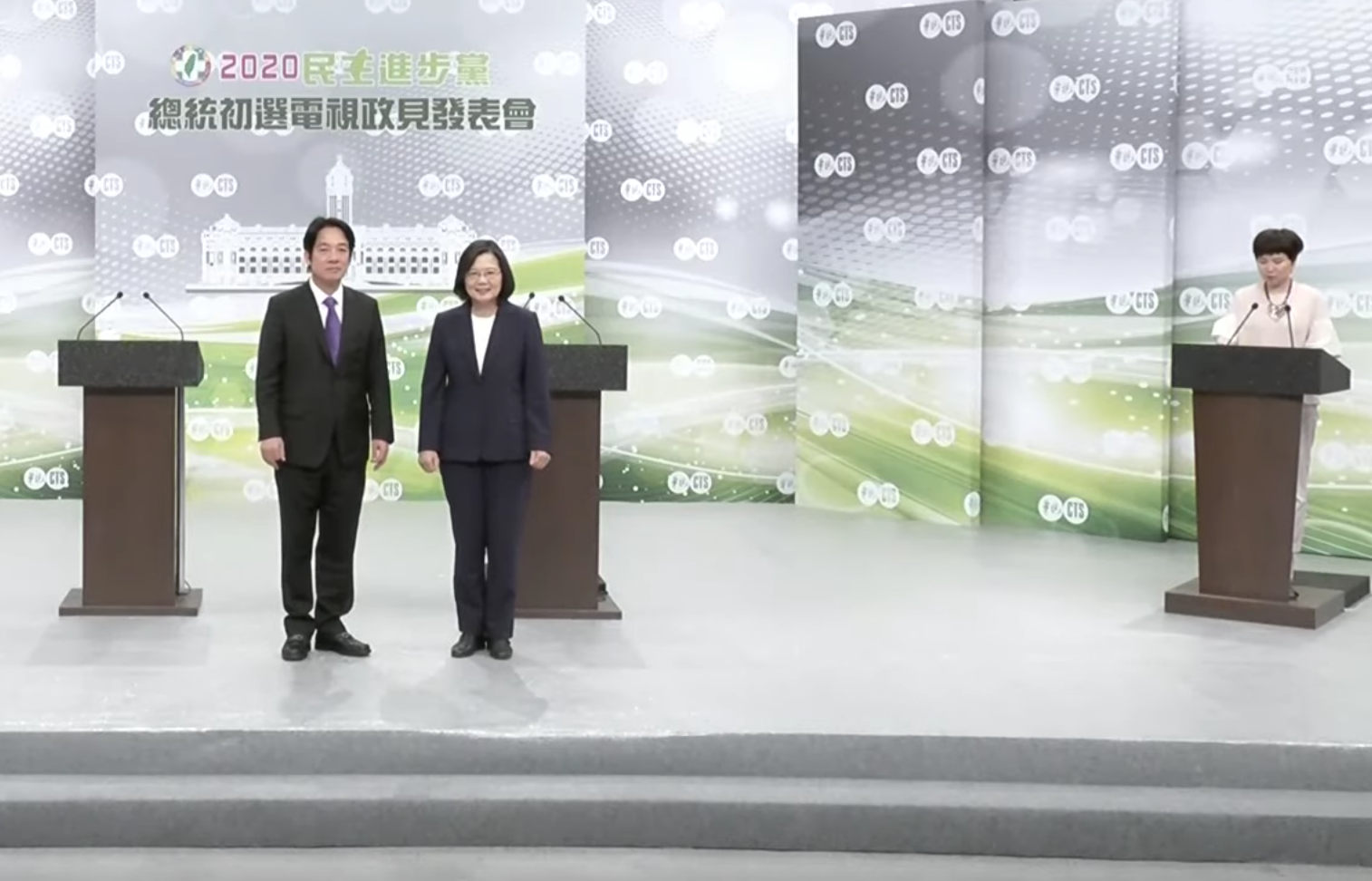 If Lai loses, Lai supporters will continue to accuse Tsai of being violating the internal democracy of the DPP—never mind that Lai attempting to push for polling only using landlines was a clear attempt to skew polling in his favor, seeing as Lai supporters tend to be older. Widening, internal splits within the DPP seem likely to continue, then, particularly along generational lines between younger, more progressive voters who seem to back Tsai and older, more conservative voters that back Lai.

It is to be noted that rising stars within the DPP who entered the party after the Sunflower Movement, such as city councilors Jiho Chang and Wu Pei-yi, have expressed support for Tsai. And it will not be surprising if younger DPP grassroots members become enraged with Lai and his supporters for seeking to disenfranchise them in voting by pushing for landline-only voting. In past years, younger DPP members have increasingly become alienated from older members of the party not only because of their misogyny against Tsai, but their opposition to gay marriage.

As such, it would not be surprising if Lai’s challenge widens splits in a manner divisive of the DPP’s forces in 2020 presidential elections, weakening the DPP’s chances of victory. However, this may ultimately reflect a generational shift within the pan-Green camp as a whole.