263 DOMESTIC CASES were announced by the Central Epidemic Command Center (CECC) today, with three imported cases, for a total of 266 cases. 28 deaths were announced.

The majority of cases were again in the greater Taipei area, with 112 cases in New Taipei and 58 cases in Taipei. There were 43 cases in Miaoli, signaling an uptick in cases primarily among migrant workers at five electronics factories. Otherwise, there were 14 cases in Taoyuan, 12 cases in Keelung, ten cases in Changhua, seven cases in Hualien, two cases each in Nantou and Hsinchu County, and one case each in Yilan, Tainan, and Taitung.

The uptick in cases in Miaoli is due to second-round testing among migrant workers that began yesterday. The second wave of testing at the King Yuan factory has led to 30 positive test results, with around 1,000 tested to date. With the increase in cases in Miaoli, it is possible that poor social distancing measures maintained by the company during the first round of testing or in migrant worker dormitories could have led to more cases. With the Miaoli County government criticized for restrictions forbidding migrant workers from going outdoors unattended, Miaoli county magistrate Hsu Yao-chang of the KMT lashed out at “human rights-ism” in comments today, claiming that this was a distraction from the fight against COVID-19. 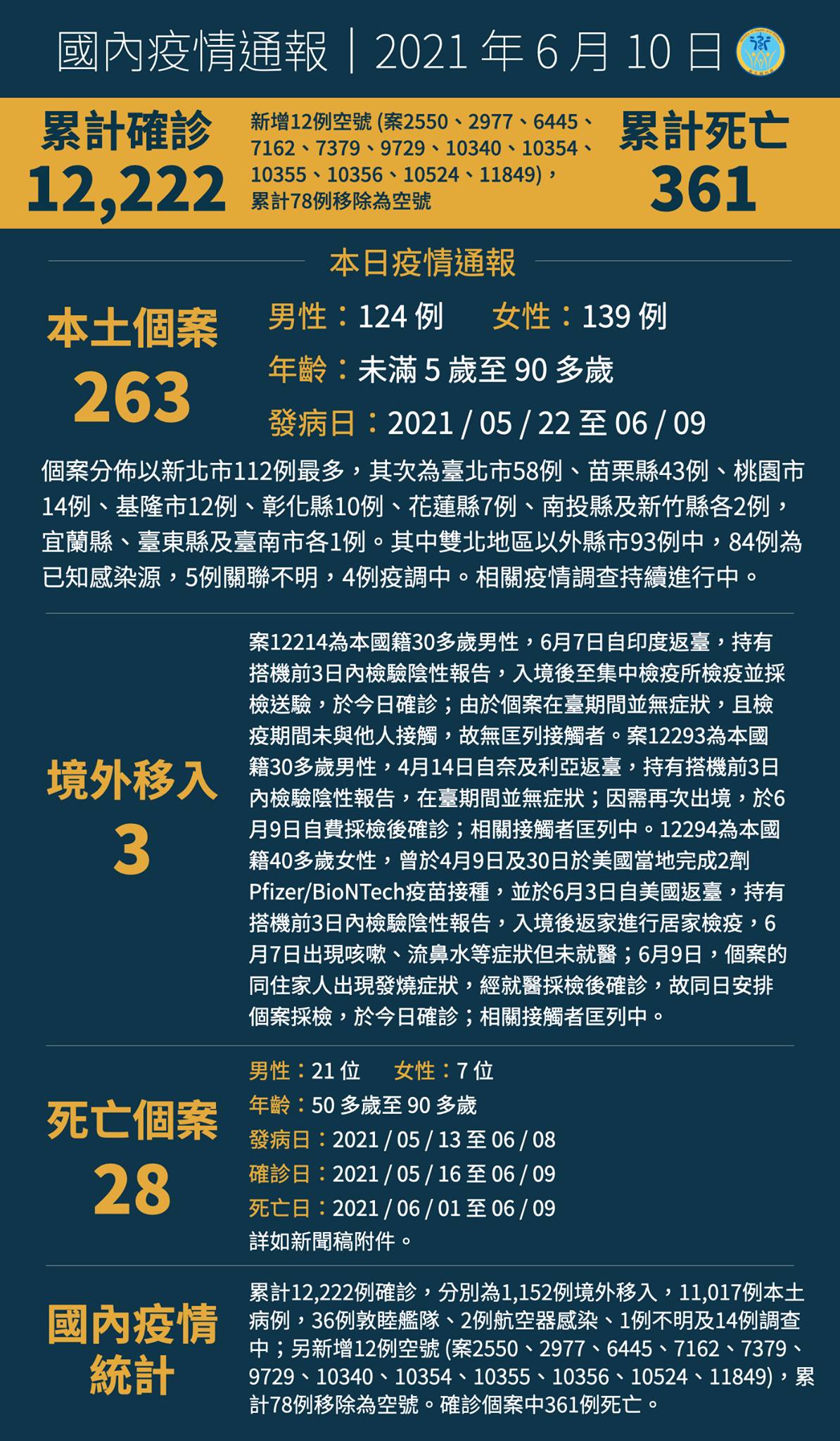 Infographic on the new cases today released by the CECC. Photo credit: Ministry of Health and Welfare/Facebook

Despite the Miaoli cluster, migrant worker brokers still have carried out cost-cutting measures. In Hsinchu, a broker was found to have sent 32 migrant workers to a regular hotel instead of a quarantine hotel, resulting in six testing positive for COVID-19 by PCR testing.

Cases are slightly down for New Taipei compared to yesterday. The rate of infection in New Taipei was 1.09%, lower than 2.06% yesterday, according to New Taipei mayor Hou You-yi. Most were asymptomatic in the last two days. Cases remain stable in Taipei, with Taipei mayor Ko Wen-je stating that the city government was researching how to use test sites to find hotspots. Ko also stated that he does not believe that the rate of death for COVID-19 was the best indicator of the COVID-19 outlook, given other factors, such as the use of breathing machines.

More testing is to be carried out in the coming days, which may lead to another increase in cases. Minister of Health Chen Shih-chung stated today that testing capacity has increased to carry out 80,000 PCR tests per day and 111 sites, so it is hoped this will be able to cope with new demand.

The CECC has warned against travel over the upcoming Dragon Boat Festival. Travel capacity has been reduced to 20% of usual capacity and refunds of train tickets continue. As 6,000 more tickets have been refunded, there will only be 38,000 riders on the Taiwan Railways over the weekend. The CECC has called on individuals that do return home to maintain social distancing measures, to practice self-health management, to avoid going out, and maintain COVID-19 measures even among relatives.

Taipei mayor Ko Wen-je continues to face controversy over vaccine allocations to the Good Liver Clinic, which is accused of defying the vaccine priority order and vaccinating members of the general public. Although the clinic claims it vaccinated volunteers, some have accused the clinic of vaccinating the well-connected and powerful.

Particularly controversial is that the head of the clinic, Hsu Jin-chuan, is said to be a former mentor of Ko’s and is known as a famous doctor. Questions have been raised about why a 102-seat clinic received 1,150 doses of COVID-19, when other clinics have not, the clinic having quickly received 1,000 extra doses after claiming that 150 were not enough. Ko blamed the incident on a section chief, but Ko has been accused of attempting to pass blame downward. The head of the Taipei Department of Health has tendered his resignation to Ko. If Ko accepts the resignation, given these allegations against Ko of trying to deflect blame to subordinates, this is not likely to quell blame against Ko. 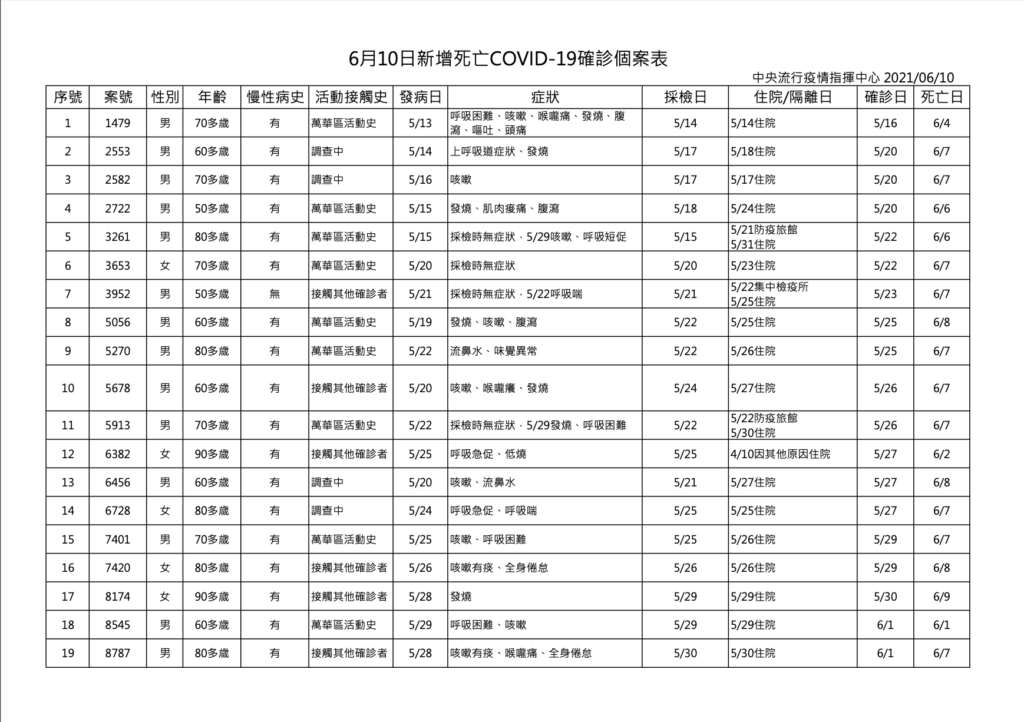 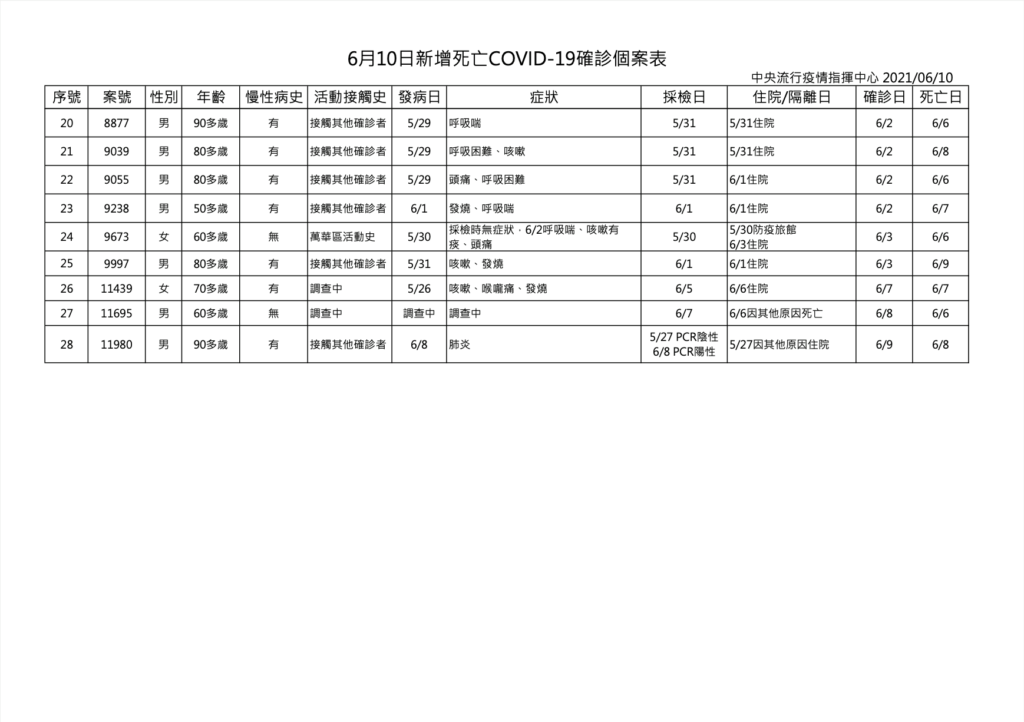 Ko and the Taipei city government held a press conference about the incident, but provoked further outrage after he revealed the four clinics run by the Dianthus Medical Group revealed 850 doses of vaccines. The Dianthus Medical Group is run by another famous doctor, Su Yi-ning. The Dianthus Group has defended its vaccinations as legal, in accordance with proper procedures, and stated that it will consult with lawyers about what it views as being defamed in the public.

The CECC reminded that clinics should maintain vaccination orders at its press conference today, stating that information about vaccination orders was announced in April and March. The clinics were not distributing vaccines to try and ensure that they would be used before they expired, since the wave of vaccines distributed would have expired in August and demand is currently high for vaccines, despite slow initial vaccination.

The CECC will not punish clinics that go out of order for vaccination by cutting their allocation, but do so through other means. When asked to respond about Ko’s accusation of 200 missing bottles, the CECC stated that these were already distributed to the Ren’ai Hospital. The CECC is still working on the vaccine distribution system, but this will be announced when ready. Chen Shih-chung stated that integrating existing vaccination information from local departments of health, particularly for individuals over 70 years old, should not be too difficult.

One of the imported cases from today had received a BioNTech vaccine. The CECC stated that this pointed to how it is still possible to become infected with COVID-19 if vaccinated, even if the odds of this are lowered by vaccination, and transmissibility is decreased. The CECC stated that second-degree infection had not occurred yet in Taiwan.

With it expected that members of the public may need to print out forms for applying for economic relief subsidies from the government, 7/11 has made a special option on printers to print the required forms.

There are currently no plans to extend the June 30th deadline for filing taxes, with 73% having already filed. Considerations are being made about whether to close counter services, with Chen Shih-chung urging the public to file taxes online and that tax offices must maintain social distancing measures while indoors.

When questioned in the Legislative Yuan today, Minister of Health and Welfare Chen Shih-chung stated that there were currently no plans to shift other parts of the country less affected by the outbreak than the greater Taipei area back to level two alert status. Chen also stated that the Ministry of Health and Welfare has already paid deposits for vaccines it has purchased from abroad, which have not yet arrived in Taiwan. 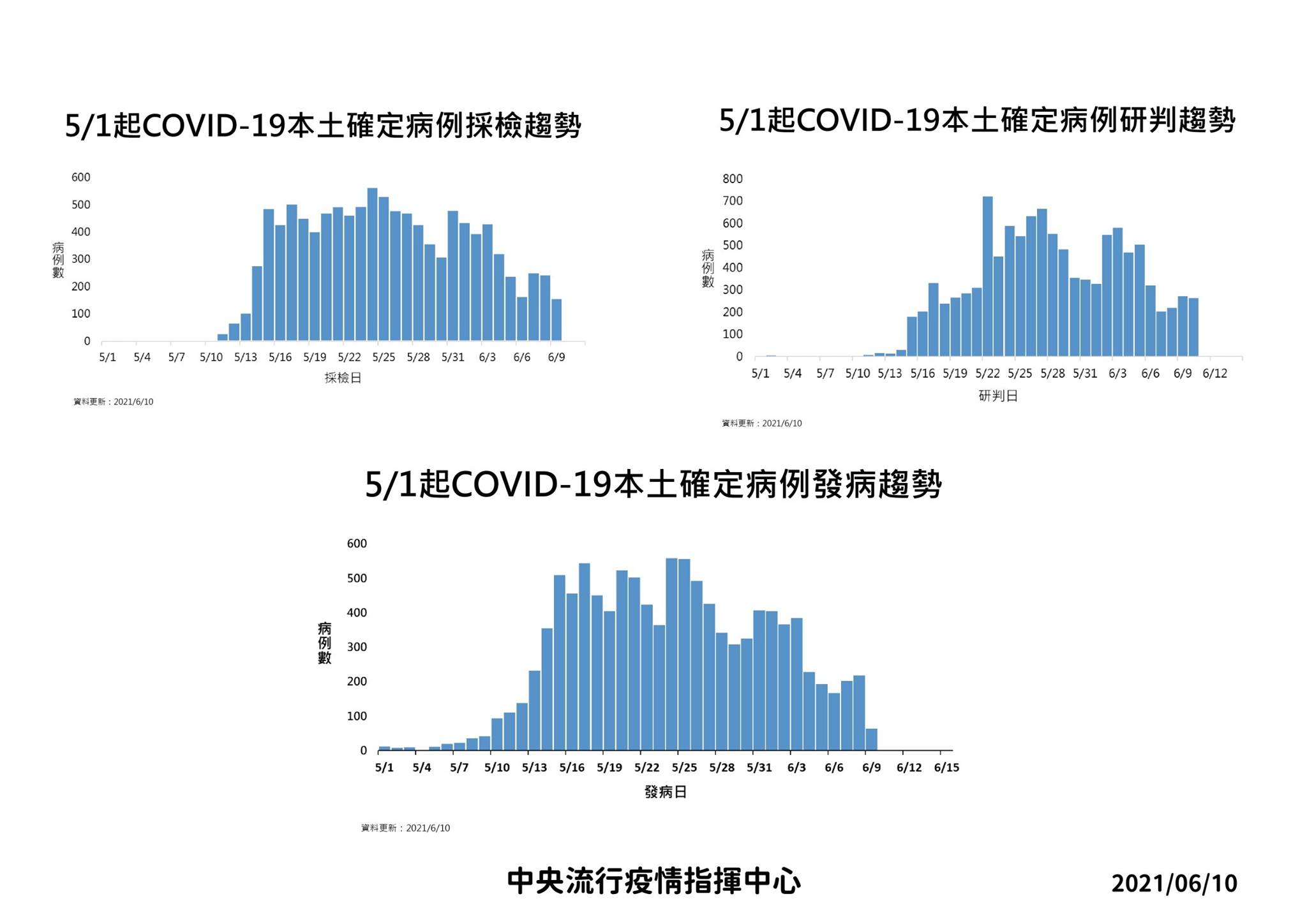 After a photographer found dead in Next TV’s offices earlier this week was found to be positive with COVID-19, this has led to testing of Next TV workers. While eleven workers previously tested positive by rapid testing, these were false positives. A second wave of 200 tests found no positives.

A student at Chinese Culture University has tested positive for COVID-19 after returning home to Macau. This took place despite having negative test results before traveling back to Macau.

A cluster at the En Chu Kong Hospital in New Taipei has resulted in three workers and four patients at the hospital being infected with COVID-19, resulting in the death of a 92-year-old patient. Similarly, a cluster has broken out at the Shangho Hospital, with four patients, three visitors, and two nurses having become infected. A nurse at the Taichung Armed Forces General Hospital has also proved positive for COVID-19, resulting in the hospital suspending services.

As the government is drawing up plans to vaccinate key personnel needed to maintain the functioning of the nation, reports suggest that the Ministry of Transportation and Communications (MOTC) may hope to include transportation workers on the MRT, Taiwan Railways, High-Speed Rail, postal workers, and shipping workers. The same reports suggest the MOTC may also hope to include food delivery service workers, such as Uber Eats and Foodpanda workers. The CECC is still planning vaccination categories for key personnel in coordination with relevant government organizations

A World Gym in Xinying District, Tainan has been fined 420,000 NT for continuing to operate, with seven people found inside.

KMT legislator Chen Yu-chen proposed yesterday that the government can send the Taiwanese population as a whole to America on charter flights for vaccination, claiming that the US government could open up a special travel bubble through which Taiwanese did not have to clear customs. Chen claimed this would cost as much as financial bailout measures for the population, hence why this was a reasonable proposal.

Chen’s proposal was mocked by the DPP today, however. Chen previously proposed setting up a special ship for residents of Kinmen to travel to China to be vaccinated two days ago. Taiwan does not have enough planes to carry out Chen’s proposal. As Taiwan saw around 11 million visitors in 2019, this proposal would likely take around two years.

The standards for Emergency Use Authorization for domestically-manufactured vaccines have been released by the Food and Drug Administration. Apart from providing data for testing and safety, efficacy standards require that vaccine efficacy is comparable to the AstraZeneca vaccine. 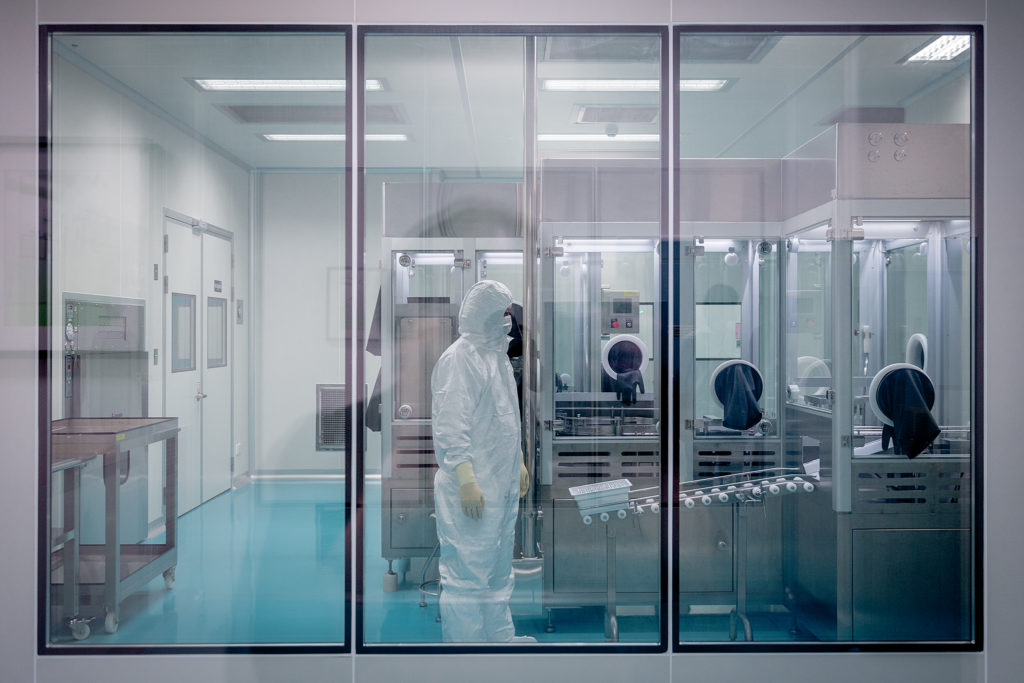 The phase two study for the domestically-manufactured Medigen vaccine will be unblinded this afternoon, with a press conference scheduled to announce what the results will be starting at 5 PM. It is possible these may not be the full results of the study, but preliminary results, however. Participants in the phase two study received their second dose of the vaccine on April 28th. It is known that domestically-manufactured vaccines are expected to be more expensive than the 750 NT cost of the AstraZeneca and Moderna vaccines.

Before the unblinding, controversy broke out earlier this week after Chen Pei-zhe, an Academia Sinica expert serving on the review committee, resigned claiming that this was in reaction to political pressure on the review committee. Since then, it has been alleged that Chen did not disclose that he was working for a Chinese company, though Chen has otherwise been described as pan-Green. Chen also criticized protein vaccines, such as those used in domestically manufactured vaccines, as ineffective and claimed that such technology has not been sent to the US FDA for review. However, this does not seem to be correct, as Novavax vaccines using the same technology will be supplied to the US as soon as summer.

Minister of Health and Welfare Chen Shih-chung revealed new details today on previous attempts by the CECC to obtain the rights to manufacture vaccines from foreign brands in Taiwan. Chen previously stated that Taiwan had originally been in discussion with European companies and more recently with US companies.

According to Chen, purchasing vaccines from abroad, domestically manufacturing vaccines, and obtaining the rights to domestically manufactured foreign brands were the three vaccine acquisition options that the Tsai administration sought. Manufacturers had been willing to allow Taiwan the rights to manufacture vaccines if it was able to produce 300 million vaccines, but Taiwan only had capacity to produce 100 million vaccines, which is what led the deal to apparently fall through.