TYPICALLY BLIND adulation of America has swept across Taiwan with the recent visit of Paul Ryan to Taiwan in order to commemorate the 40th anniversary of the Taiwan Relations Act. This should be of little surprise, however.

Ryan, who was until January the speaker of the House of the Representatives, is likely the highest-ranking American official to visit Taiwan in some time. Ryan can be in some way seen as, in this way, fulfilling the terms of the Taiwan Travel Act, which was intended to push for visits to Taiwan by high-level American officials. 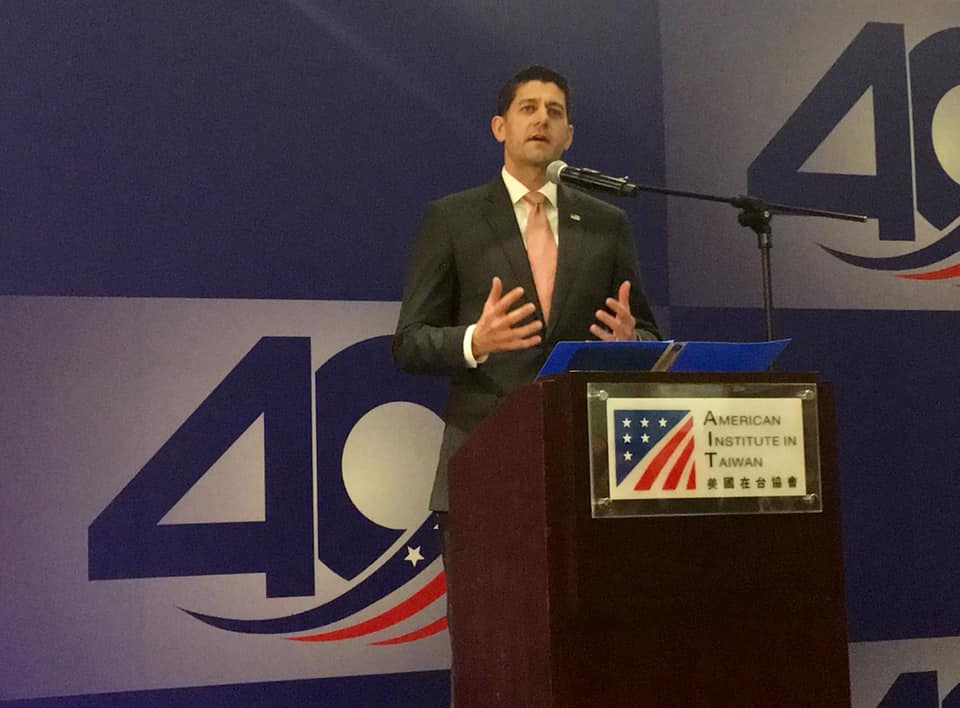 While non-elected officials from the US State Department had visited Taiwan after the passage of the Taiwan Travel Act, such as a visit to Taiwan by deputy assistant secretary of state Alex Wong after the act passed in February 2018, Ryan is probably the highest publicly elected official to have visited Taiwan since then. American congressmen Don Bacon, Salud Carbajal, and Hang Johnson of the Taiwan-USA Inter-Parliamentary Amity Association are also presently visiting Taiwan, attending events such as the 2019 Indo-Pacific Security Dialogue held by the American Institute in Taiwan (AIT), America’s representative offices to Taiwan in the absence of official diplomatic relations between America and China.

It may not be surprising that the Taiwanese government has pulled out all the stops for Ryan’s visit and the 40th anniversary of the Taiwan Relations Act, including not only high-level meetings and events held with Ryan, but Taipei 101 displaying a message recognizing the 40th anniversary of the Taiwan Relations Act. On the other hand, China sending bombers to fly around Taiwan and public comments threatening “to turn Taiwan into Lebanon” has been interpreted by some as a response to the anniversary and to Ryan’s visit and the anniversary.

Ryan’s visit continues the pattern of stronger US-Taiwan relations in the past year, as indicated in visits by Tsai to the United States, and supportive legislation for Taiwan in the form of the Taiwan Travel Act and Asia Reassurance Initiative Act. Ryan’s support for Taiwan is on the basis of traditional Republican opposition to China on the basis of historical anti-Communism, which would also be the reason as to why other prominent Republicans such as John McCain or Marco Rubio with hawkish views on China are also strongly supportive of Taiwan. Ryan’s visit takes place at the same time as a possible arms sale of American F-16s to Taiwan, inclusive of a 500 million USD training program, is being negotiated.

That being said, the push for stronger US-Taiwan relations in the past year has been primarily bipartisan, given that opposition to China is in American interests for both Democrats and Republicans—something scarcely registered in Taiwan because of the prevalent political myth that Republicans are more supportive of Taiwan as compared with Democrats, who are seen as pro-China. 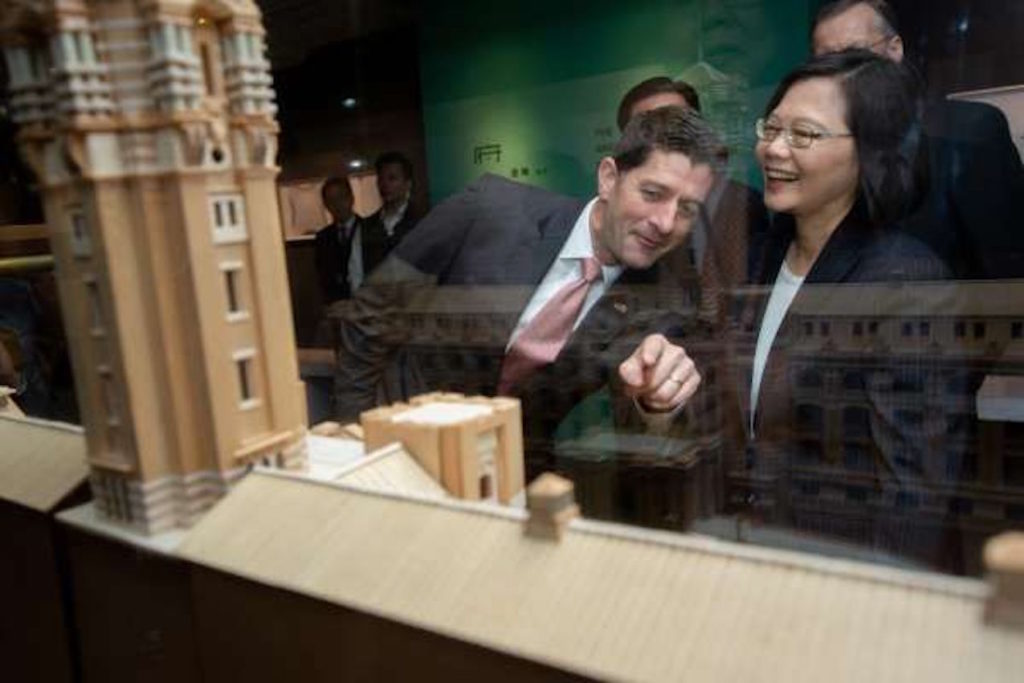 Indeed, one also notes that with Ryan’s visit to Taiwan, few have noted the apparent gap between Republican supporters of Taiwan as Ryan, seemingly aligned with members of the Trump administration with a strong anti-China animus such as National Security Advisor John Bolton, as differentiated from American president Donald Trump himself.

Because of the lingering political memory of the Trump-Tsai phone call of December 2016, a large break from past American political precedent, Trump continues to be seen as strongly supportive of Taiwan rather than this having simply been another unpredictable political move by Trump lacking in long-term considerations, though one brokered by Republican politicians such as former senator Bob Dole. Due to lack of information, as well as conflating wishful thinking for reality, many in Taiwan still continue to see Trump as opposed to China on the basis of traditional Republican anti-Communism, failing to see that Trump differs from traditional Republicans, and failing to note where Trump has zig-zagged unpredictably between sharp hostility toward China and periods of rapprochement with China.

Yet either way, while Ryan’s visit to Taiwan may be a show of support from Taiwan from the traditional Republican political establishment, it is certainly not necessarily a show of support from Trump, as many in Taiwan seem to think it is. Ryan’s relationship with Trump as speaker of the House of Representatives was marked by periods in which Ryan remained silent regarding Trump’s unusual political decisions, as well as periods of tension, and some perceive Ryan’s early retirement from the House of Representatives as due to growing tensions with Trump. America continues to be seen in a homogeneous framework by many in Taiwan, with a failure to grasp the internal tensions of American politics.

And so it is not surprising that Ryan is uncritically celebrated as an old “friend of Taiwan” either, with a lack of attention to Ryan’s poor record on opposition to gay marriage, opposition to any and all abortion rights, calls for the privatization of Medicare and low taxes on corporations, opposes efforts to provide for equal pay for women, and has opposed climate change legislation. Ironically, while one of Ryan’s statements during his visit to date has been that more countries should seek to be like Taiwan, one imagines that Ryan might be saying otherwise if he were more aware of the progressive political views that the Tsai administration claims to stand for. 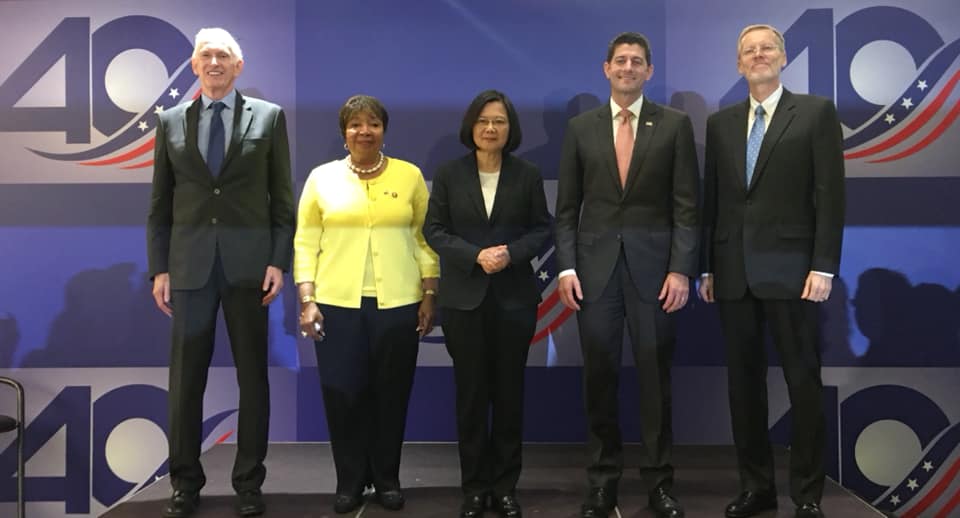 As such, it has ironically fallen to members of the KMT such as Kaohsiung mayor Han Kuo-yu to criticize stronger US-Taiwan relations as America attempting to play the Taiwan card against China, claiming that arms sales to Taiwan from America will only provoke conflict in the Taiwan Straits. Certainly, such claims are only made by the KMT in order to facilitate its pro-unification aims. Temper tantrums thrown by Terry Guo, who may be angling for the KMT’s presidential nomination, have been similarly ridiculous.

At the same time, from a pro-independence perspective, the uncritical idealization of America in Taiwan is self-evident. Celebrating the Taiwan Relations Act strikes as absurd when America first decided to recognize the People’s Republic of China over the Republic of China and subsequently has decided to suspend Taiwan in the limbo of “strategic ambiguity” for decades. This would be all the better in order to back Taiwan to counter China when needed while also making the necessary provisions to abandon Taiwan if support of Taiwan were to lead America to cross the line of what America views as acceptable losses.

Such political views have prevailed in Taiwan for decades, going back to the fact that America backed the KMT in spite of the White Terror for decades, yet few in Taiwan have been attentive to this fact. One does not expect such attitudes in Taiwan to change anytime soon.