92.3% of all cases to date have been released from quarantine. 5,000 vaccinations took place yesterday, which is a low amount of vaccinations, but brings vaccination to 39.58% coverage, which is 42.86 per 100 people.

Three cases were in Taipei and one case each was reported in New Taipei, Taoyuan, and Yunlin. The case reported in Yunlin breaks a 62-day streak in which Yunlin reported no cases. The CECC stated that this case is not expected to lead to spread in Yunlin, however, and that it should be less an object of concern because the person in question did not get COVID-19 in Yunlin. The case may be an older COVID-19 case. 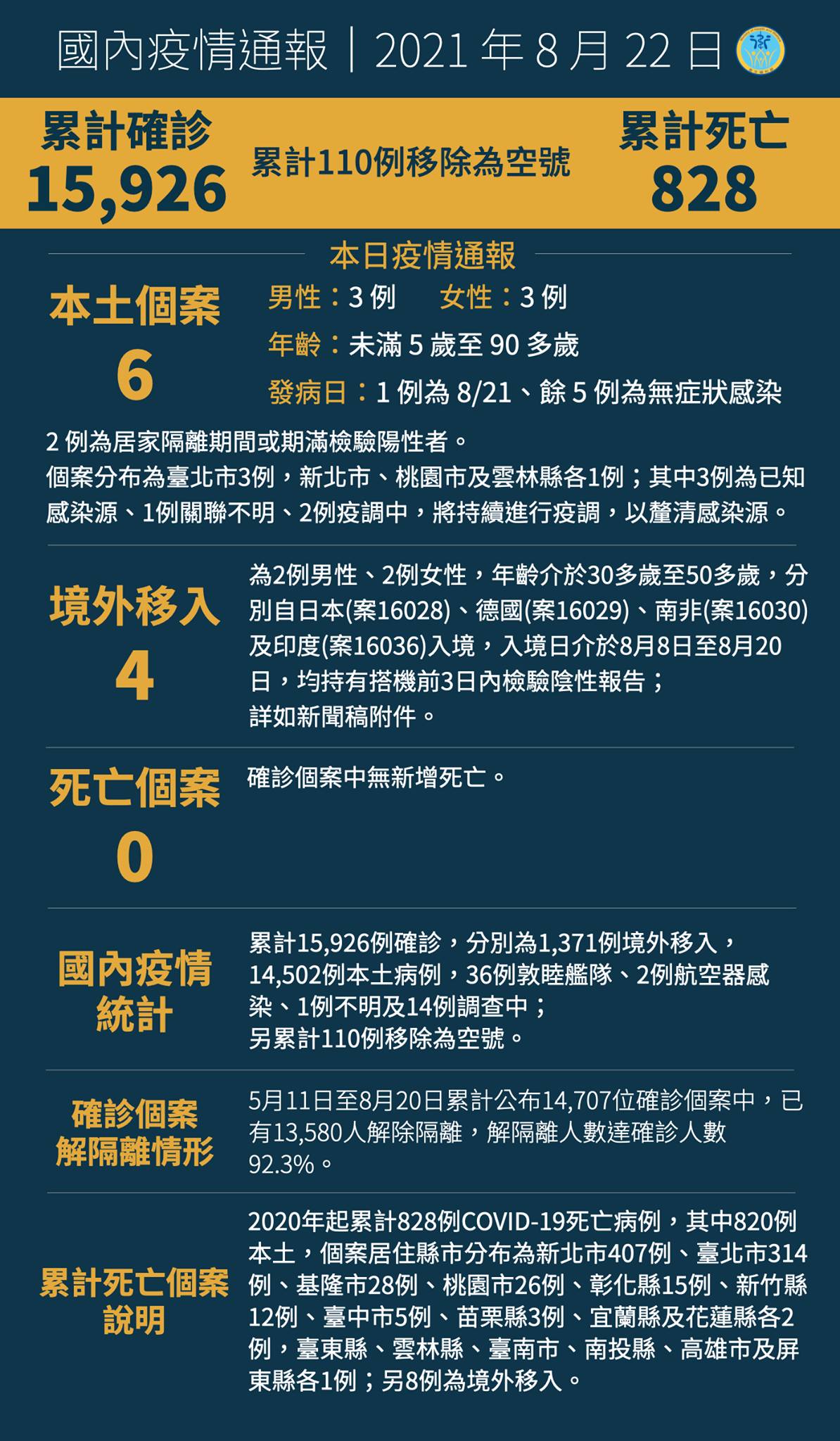 The CECC does not oppose reopening slides and other playground equipment in parks, seeing as such equipment is opened up in indoor play centers. The CECC still expects it to be some time for reopenings in the entertainment industry, seeing as this is where the outbreak began.

The CECC will look into vaccinations for food vendors at school, with schools set to begin classes again in the fall.

Taiwan currently has 95% attendance for vaccination appointments, which does not vary substantially between different vaccine brands. What the rate of attendance for Medigen will be remains to be seen. More vaccinations may be added to this round if there is willingness and supply, seeing as local governments have the capacity to carry out sufficient vaccinations.

When asked about Taipei mayor Ko Wen-je’s proposal to institute vaccine passports and create different areas for the vaccinated and unvaccinated, Minister of Health and Welfare Chen Shih-chung stated that this could lead to issues with children being separated from their parents, since children cannot be vaccinated. When asked about cases of individuals buying plane tickets to claim that they need to be vaccinated with their second dose of vaccination, then canceling the plane ticket, Chen stated that the CECC discourages this.

Chen stated that schools should set policies to make life easier for students and parents, when asked about schools that require students to pay for the cost of their own barriers.

Chen did not give a concrete answer when asked if imported cases found in Palau may mean that the Taiwan-Palau travel bubble will be called off.

According to New Taipei mayor Hou You-yi, the one case in New Taipei today was found in quarantine and was located in Xinzhuang. This case is thought to have potentially gotten COVID-19 from their father. Two have been quarantined in connection with this case, while other cities with contacts have been notified. 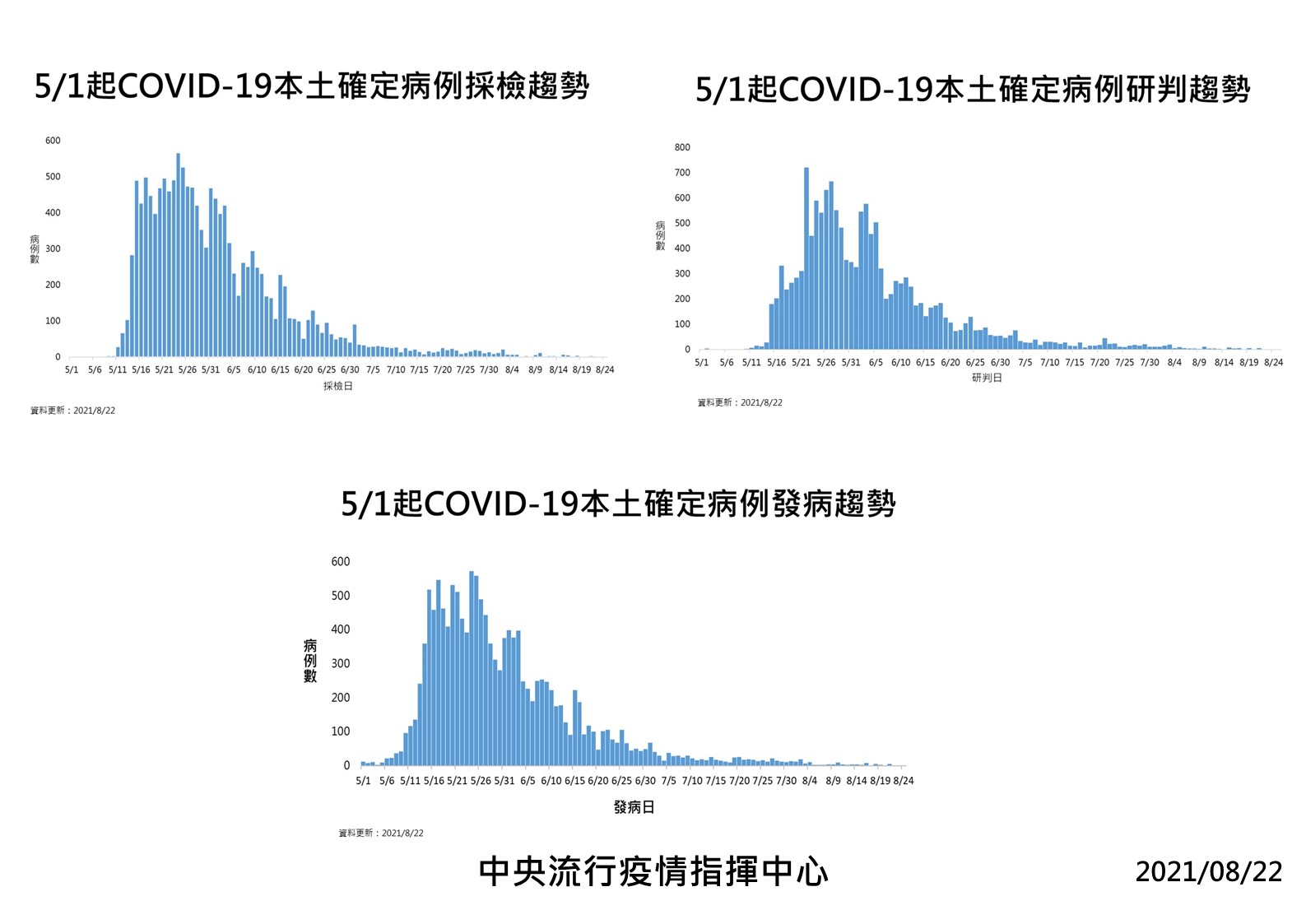 Hou stated that New Taipei does not intend to comply with the central government when it comes to allowing individuals that live together to eat without barriers. New Taipei will evaluate whether to reopen playground equipment, Hou declining to give firm answer on whether New Taipei would break from the central government from this issue and stating that it would not reopen basketball courts as well. At the same time, Hou was critical of the idea of vaccine passports as proposed by Ko Wen-je, emphasizing that young people have mostly not been vaccinated, and that young people would all be put in the unvaccinated area. Hou otherwise defended measures instituted by New Taipei to require two PCR tests to be released from quarantine.