New Bloom editor Brian Hioe interviewed Kathy Cheng, who runs the blog Tricky Taipei and is currently crowdfunding for a children’s picture book about Taipei, Hey Taipei, by e-mail. Their conversation is below.

Brian Hioe:  First, could you introduce yourself for readers who might not know you?

Kathy Cheng:  I’m Kathy Cheng. I write the blog Tricky Taipei and I’m also pretty active on Facebook, Twitter, and Instagram. In real life, I host Tricky Talks, which is an after-work social event for Taipei professionals. I also do consulting projects on the side as a communications consultant for Taiwanese and overseas clients. Oh, plus I have a 14-month old daughter Claudia! 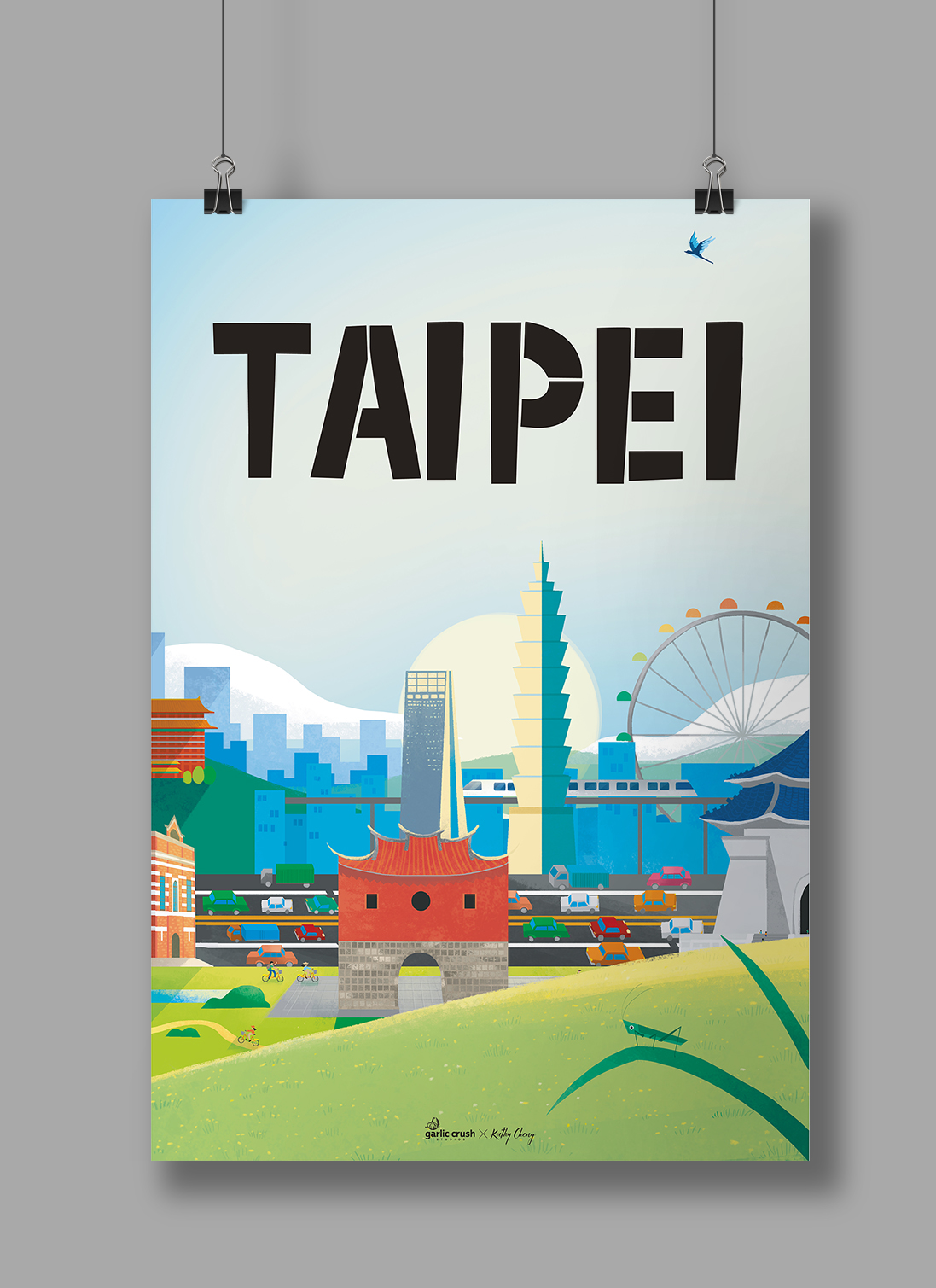 BH:  What was it that motivated you to write a picture book for children about Taipei? You mentioned in the crowdfunding proposal that you were inspired by the birth of your baby daughter Claudia?

KC:  I had the idea for the book years ago, soon after I moved back to Taipei from New York. Back then I found myself telling a lot of people, “I’m moving to Taipei!” but reactions were usually mixed. The thing is, most people without a personal connection to Taiwan don’t have a frame of reference at all. The reason is Taiwan doesn’t know how to describe itself to the rest of the world. So I’m trying to change that in a very, very small way starting with little kids. They’re easy to entertain! Maybe one day I’ll work up to a book for teenagers.

BH:  Who did you work with in order to create the picture book?

KC:  I worked with my friend Eric Yin who runs a children’s creative studio called Garlic Crush Studios. He started Garlic Crush two years ago when he decided he’d had enough of all the sensible, educational books in Chinese. He wanted to publish Chinese stories his little girls would like. Stories that were silly, fun and adventurous so kids would be inspired to play and laugh as they learned. 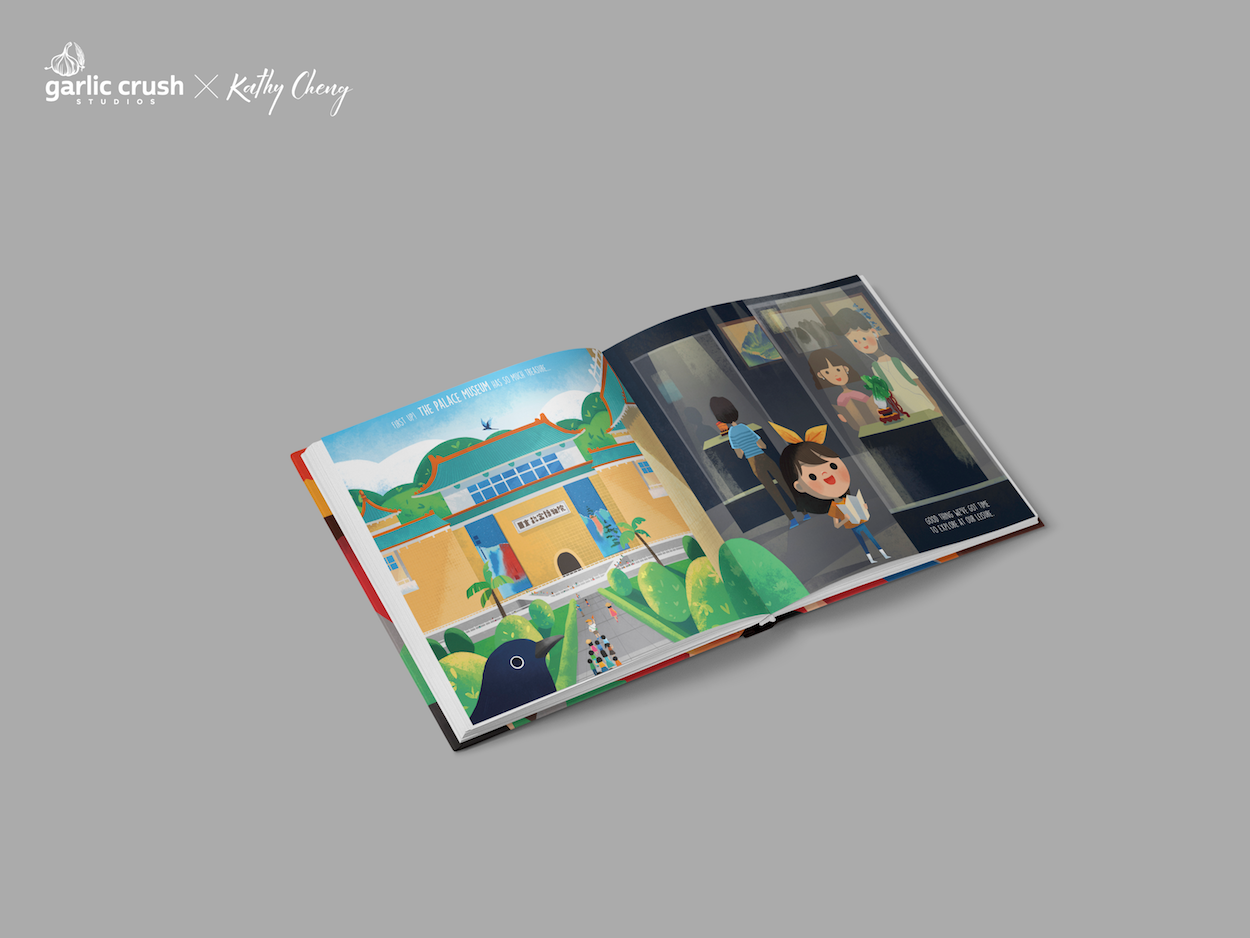 Eric was very skeptical about Hey Taipei at first because in his experience Taiwanese parents aren’t very experimental when it comes to books. So I basically told him if Garlic Crush didn’t publish Hey Taipei, I didn’t think it would ever happen. No traditional publisher in Taiwan would ever take it on. Why would they publish an English-only children’s book about Taipei?! They’re all too conservative.

The entire project took almost a year to put together. I worked really closely with the Garlic Crush illustrator, a talented young woman named Weiting Zhou. She’s based in Taichung, so despite dozens of video calls, we still haven’t met in person. The illustrations took four or five months to complete. We had a deadline and blew right through it, so I just stopped paying attention to the date.

We went through lots of rounds of revisions because I wanted the book to look and feel different than the typical Taiwan-produced picture book. But we also wanted to make sure there were things Taiwanese people would instantly identify with, so it feels like their book too. For instance, on the page with the dumplings and hotpot dinner, you can recognize the colors of Apple Sidra, Sarsaparilla, and Taiwan Beer on the table. And on the page set in the National Palace Museum, you see the jade cabbage and the braised pork belly inside the displays. 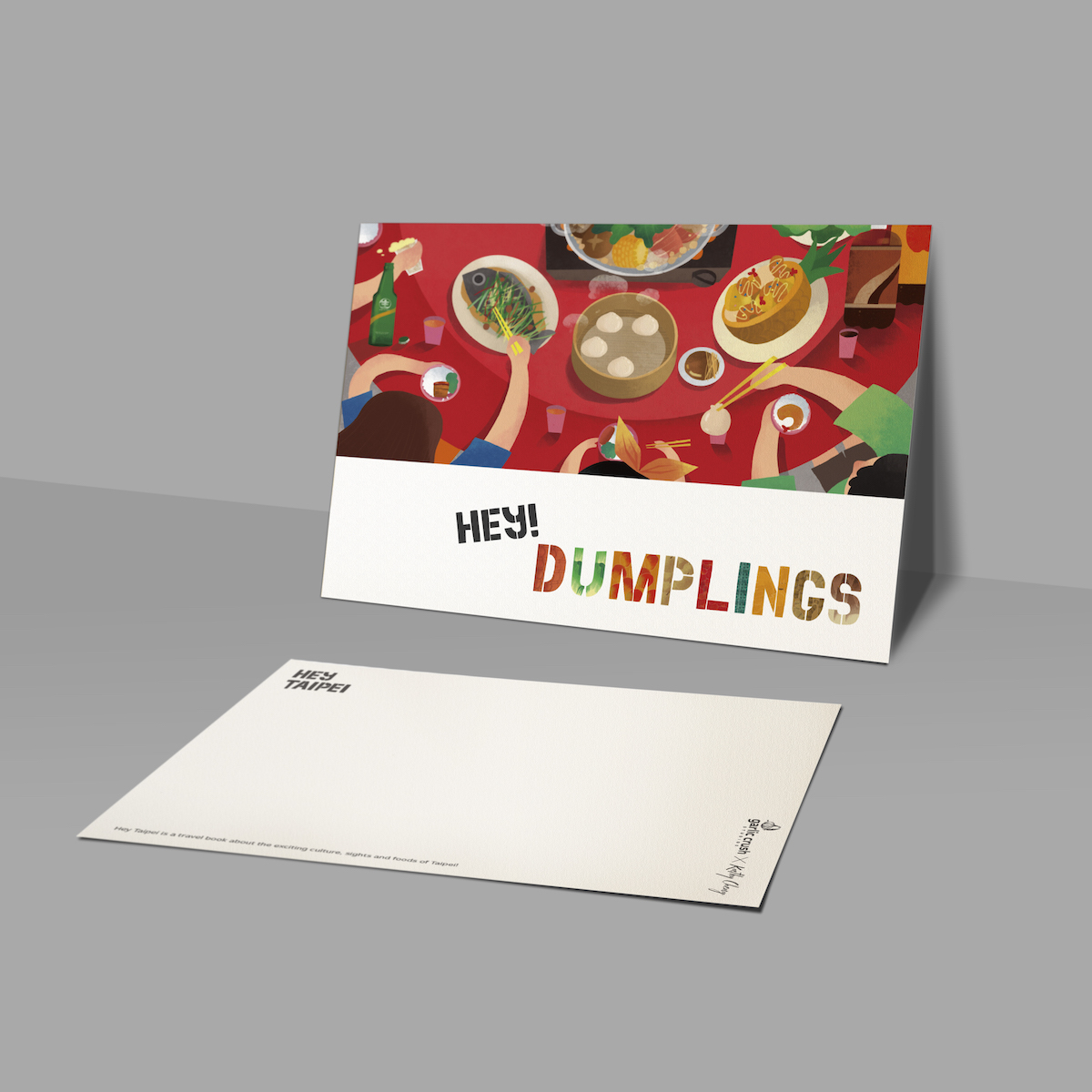 After the illustrations were done, the book was designed from front to back. The posters, postcards and the tote bag for the crowdfunding campaign were designed at the same time.

BH:  Why is there is a need for an English-language picture book on Taipei?

KC:  I myself grew up not having a deep sense of what it feels like to be Taiwanese. I grew up in Sydney and sometimes it felt easier to identify as Australian than Taiwanese. I think it’s the same for overseas Taiwanese kids today. You don’t get to cheer on the Taiwan team at the Olympics. There aren’t super well-known Taiwanese movie stars or celebrities. There isn’t a lot that’s relatable. 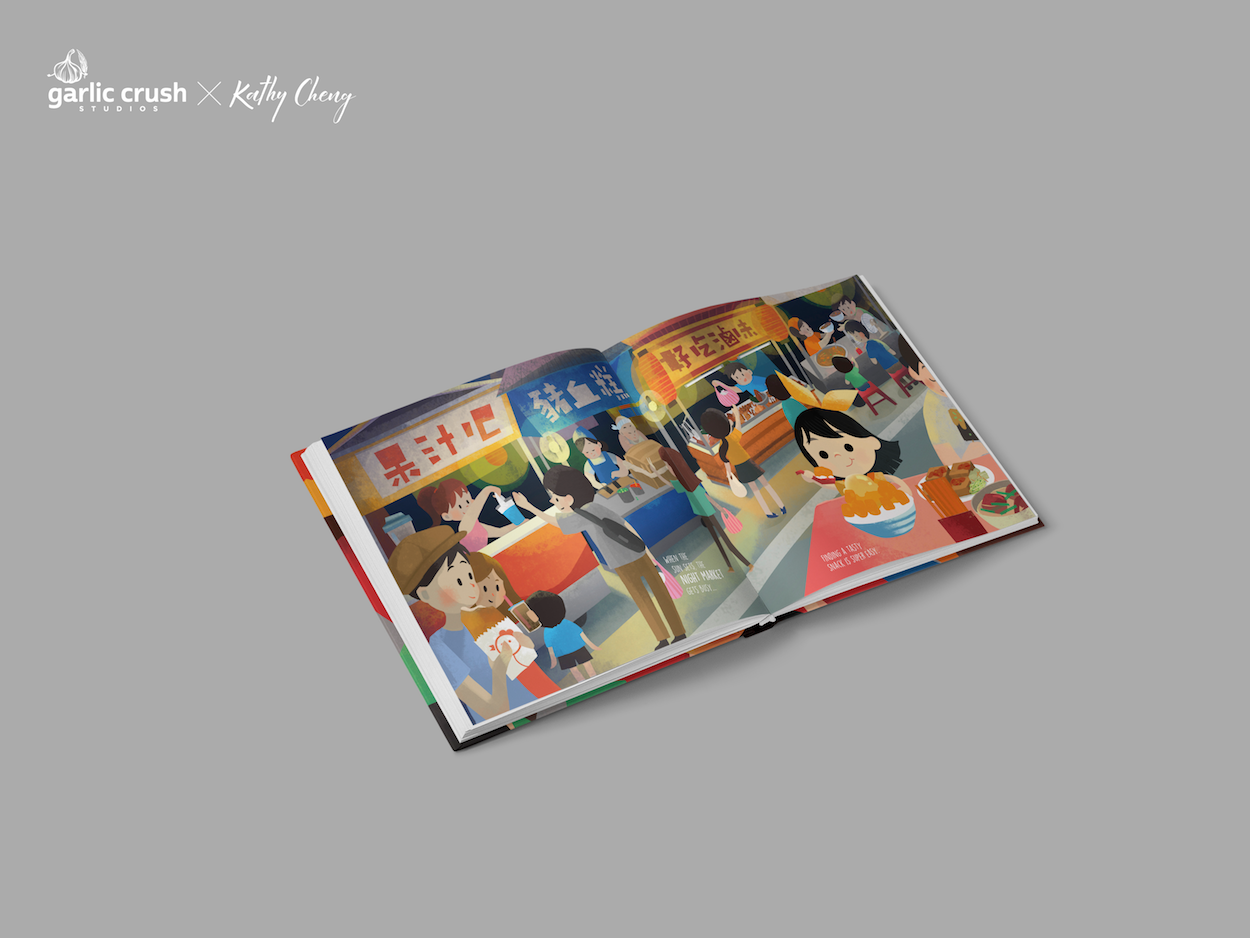 So part of the motivation for Hey Taipei is telling this little story about Taipei so these kids can feel connected to their roots. And it’s in English, which is the language they’re absorbing everything else. I feel pretty strongly that Taiwan should be telling more of its own stories in English and creating more content from the Taiwanese point of view.

On the flip side, the book is also designed for Taiwanese kids learning English. A friend of mine runs a bilingual preschool and he said there’s nothing to help children develop their Taiwanese identity in English. I also spoke with someone who volunteers at a public library reading English books to Taiwanese kids. He said the books are all American or British so the subject matter is never native to them. But with Hey Taipei they can see themselves in the story, they can recognize the scenes in the illustrations and they get to learn vocabulary for things they know in everyday life. 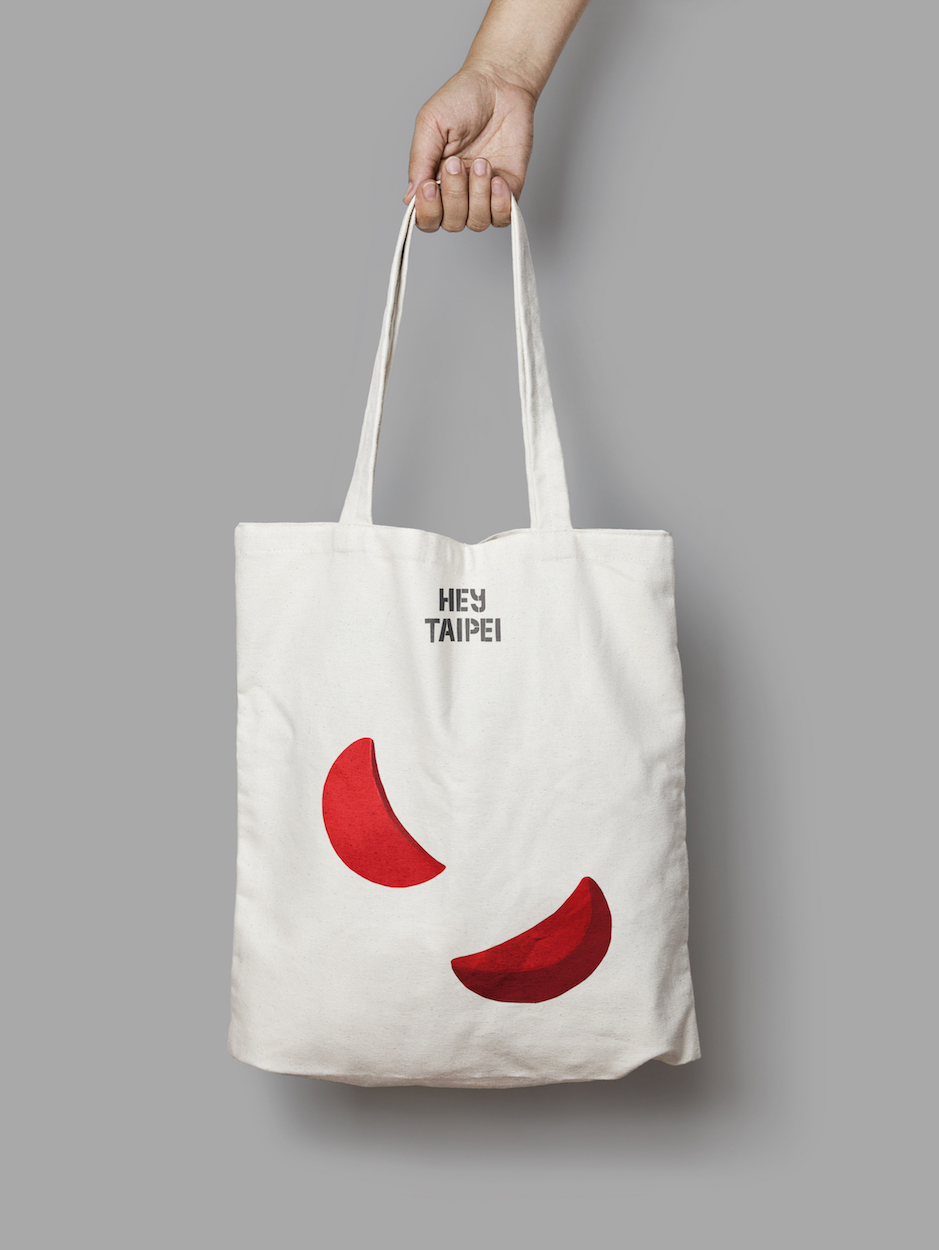 BH:  What have reactions to the crowdfunding platform been from both Taiwan and abroad?

KC:  Overall, the reaction has been really positive. There were a couple of people who said, “Finally!” Others immediately wanted to buy it as a gift for family and friends overseas. A guy in San Francisco bought a copy for his daughter so she would know where her dad lived a long time ago. A couple of people have already requested Hey Taipei in Chinese for their kids who are learning Mandarin. And a friend bought five copies because he plans to take them back to the States to donate to schools.

Orders have come in from everywhere. From Hong Kong, Tokyo, and Sydney. Even Poland! A handful so far are going to the UK. We’ve had dozens of orders from the US, everywhere from San Francisco to Brooklyn, Pittsburgh to Portland. Canada and the UK too. 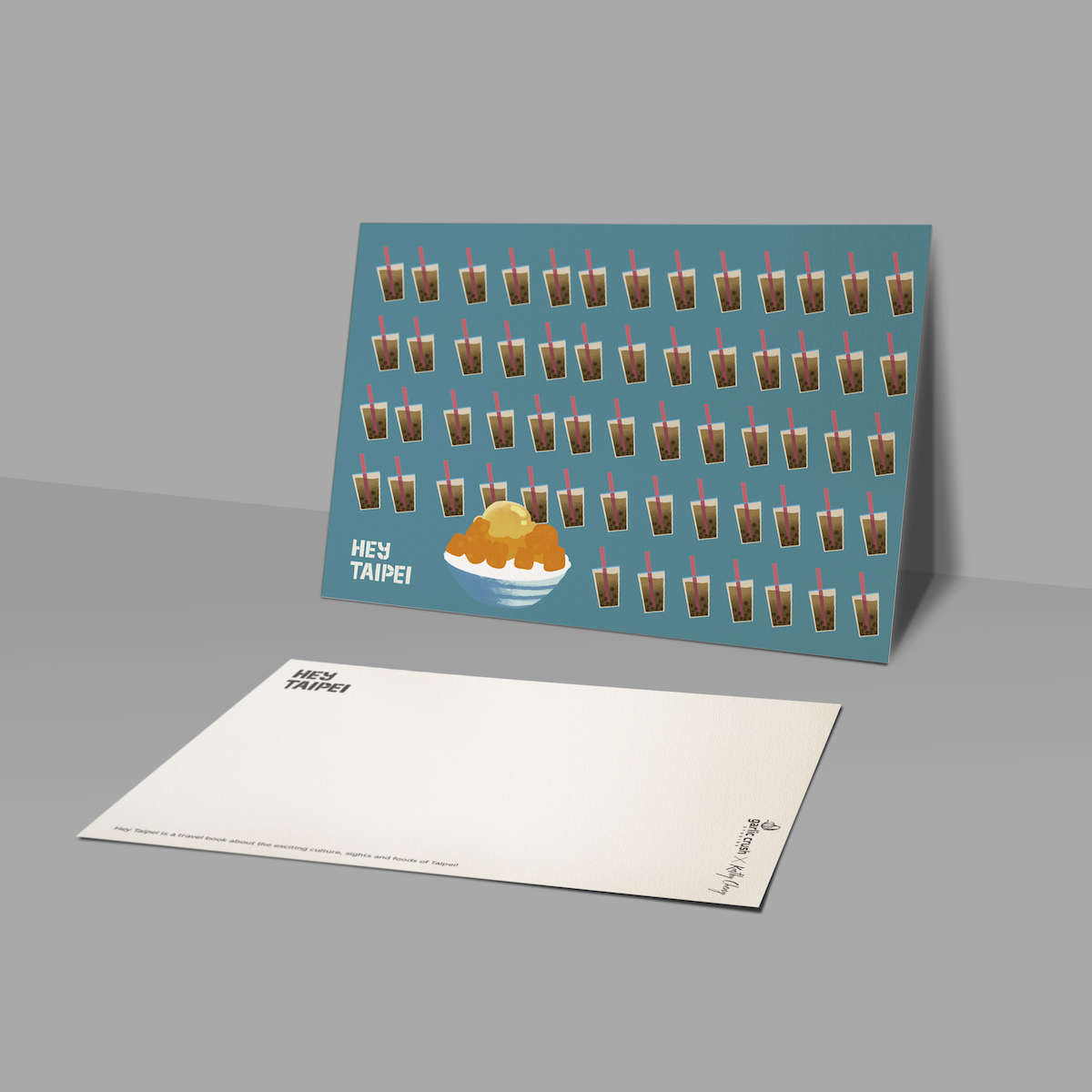 A funny reaction was how unfamiliar the Chinese-language checkout was on zeczec, the crowdfunding site. I got so much feedback about that I created a separate English e-commerce site to take pre-orders. Then a bunch of orders flooded in once that page went live. It goes to show how much English dominates the Internet.

BH:  Lastly, is there anything you would like to say in closing to readers, both Taiwanese and international?

KC:  Please share Hey Taipei with your family and friends! If they have a connection with Taiwan, then it’s a book they should enjoy.

The crowdfunding campaign on zeczec has about 10 days left. 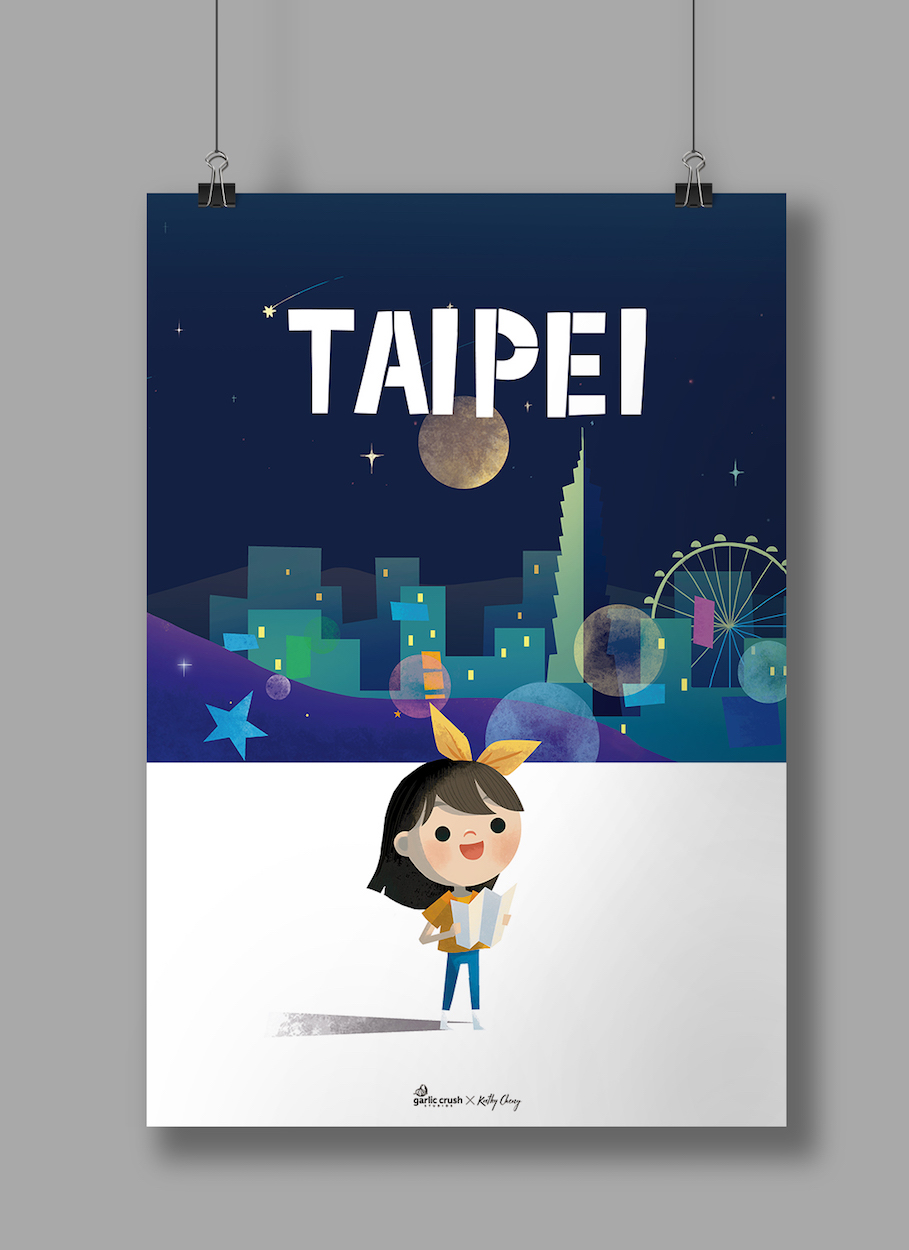 The English pre-order site is at heytaipeibook.com.