IT HAS BEEN a chaotic day of protest both inside and outside the Legislative Yuan. With the review of planned changes to the Labor Standards Act scheduled for today and the changes set to take effect in the next few months after passing this review, it was anticipated by many that today would be a day of intensive protests against the DPP attempting to force these changes into law. Last night saw labor unions paint the gates of the Executive Yuan and Ministry of Labor red, representative of the harm that new labor law changes would do to workers. In the past two weeks, a number of demonstrations broke out against planned labor law changes and a hunger strike that lasted over three hundred hours took place. 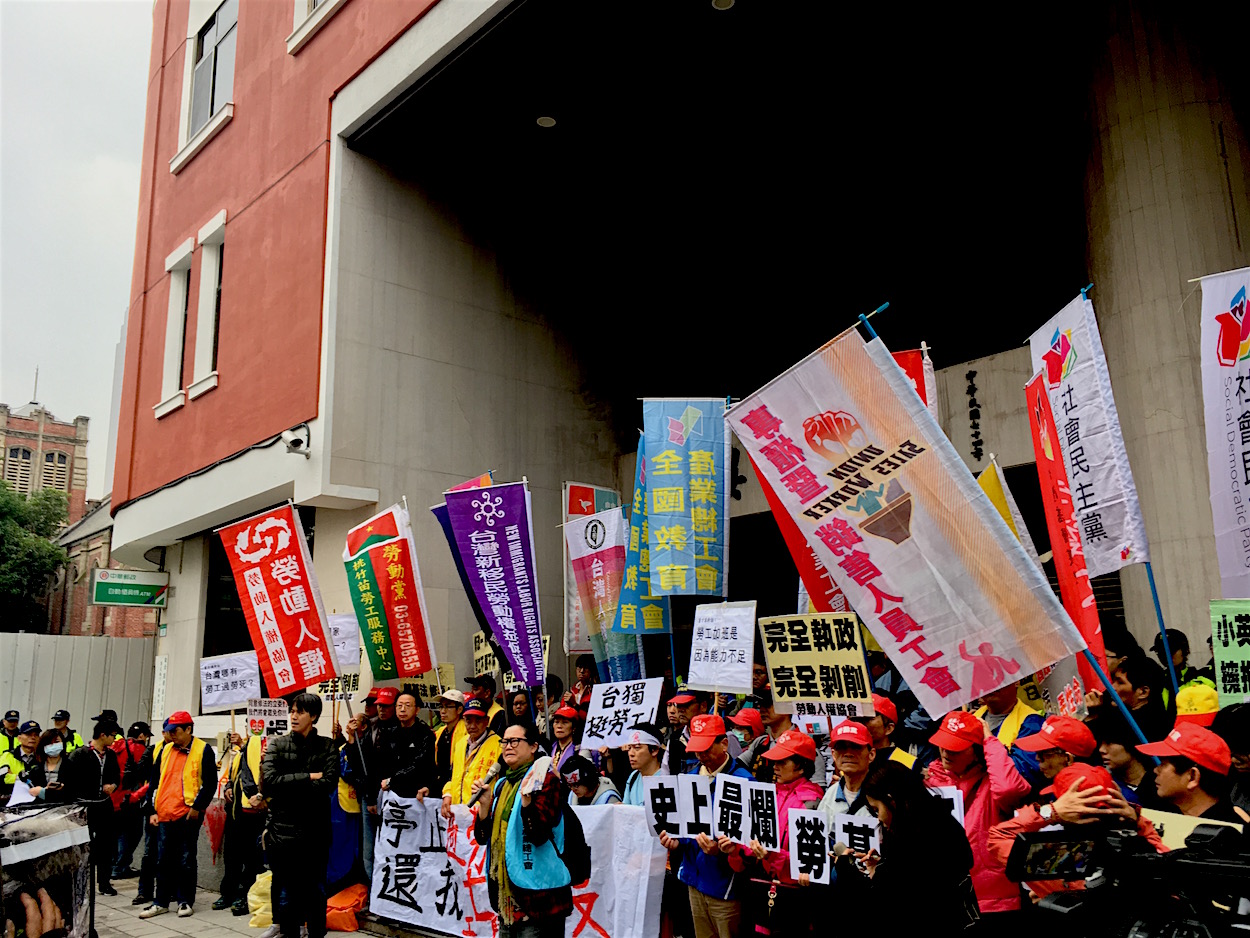 The beginning of demonstrations this morning outside of the Qunxian Building of the Legislative Yuan. Photo credit: Brian Hioe

And indeed, protests today were intensive. Demonstrations began this morning at 9 AM, coinciding with the start of the review. Although demonstrators were not large in number, perhaps numbering no more than between one hundred and two hundred people, protests were intense, seeing several sharp clashes with police. It is believed by many, including workers within the Legislative Yuan, that the review was scheduled for early morning on a weekday in order to try and minimize the size of protest, seeing as many would be working then. Likewise, accentuating charges of undemocratic actions by the DPP in attempting to force through these labor changes, public hearings regarding the changes were cancelled, opening up the accusation that the DPP is attempting to use “black box” means lacking transparency to try and force the bill through.

Changes to the Labor Standards Act have been termed by experts as undoing thirty years of labor reforms in Taiwan and affecting an entire generation, making it possible for employers to force workers to go to work with only eight hours between shifts, removing set days off per week and making it so that any rest days that workers have are “flexible” days in which they could still possibly called to work. Such changes come on the heels of labor reforms last year by the Tsai administration, which the Tsai administration also proved willing to ram through legislature, shrugging off accusations that the Tsai administration had ignored due oversight and review. 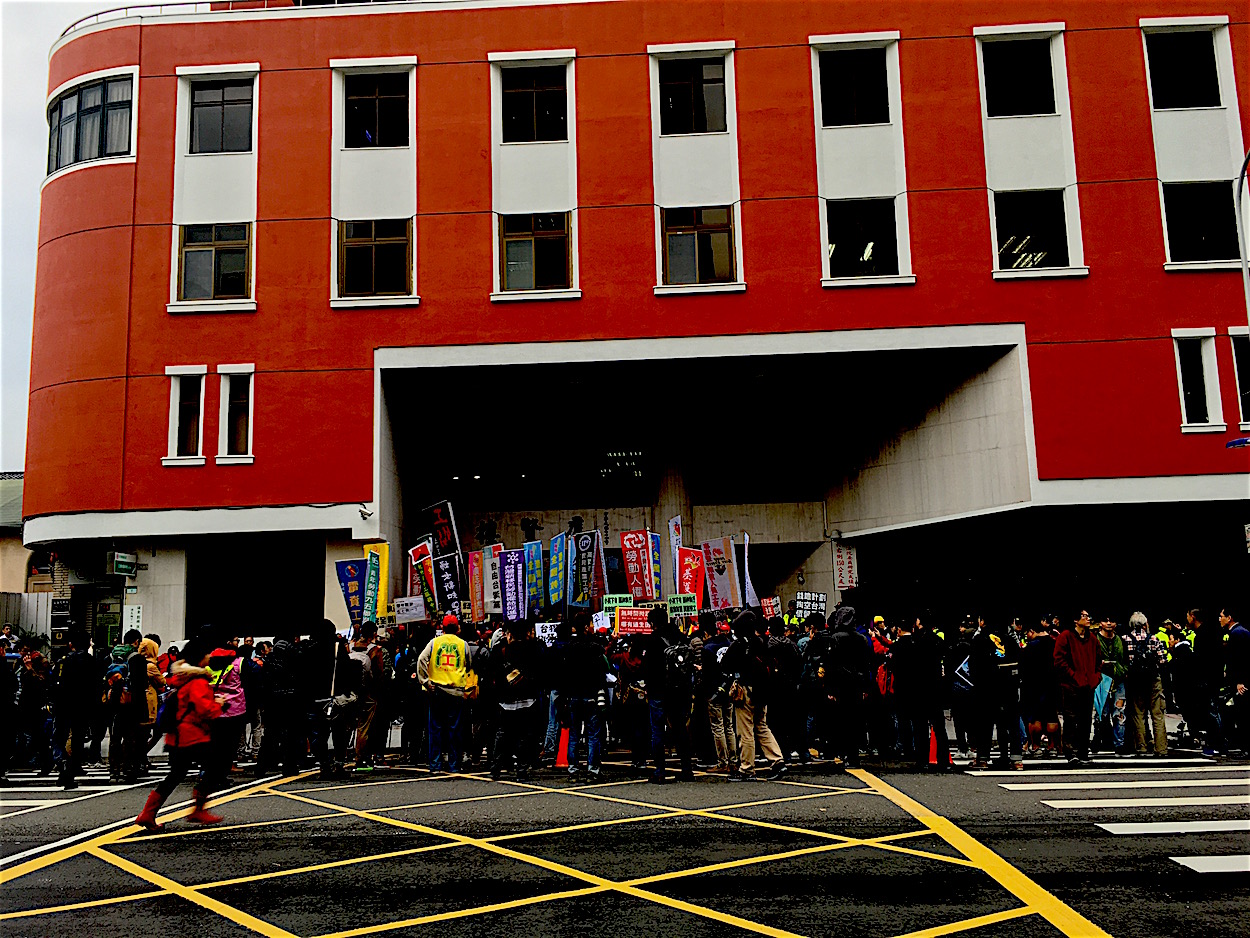 The amount of hours of overtime that workers can be made to work has also been increased to 138 hours over a three month period and new regulations that allow for the deferral of unused vacation days until a subsequent could possibly be used to ensure that workers could be made to indefinitely postpone vacation days. Likewise, these changes will not restore public holidays originally cut by the Tsai administration. These reforms take place in spite of that Taiwanese workers already work the fourth longest working hours in the world, according to the Ministry of Labor.

The Tsai administration’s labor reforms last year had already proved unpopular, in particular seeing as they cut seven public holidays, but these new changes will not only fail to restore these holidays, but significantly worsen conditions for Taiwanese workers. As they were made in response to big business organizations expressing their dissatisfaction with previous labor reforms, this would be a case in which the Tsai administration has bald-facedly compromised the interests of Taiwanese labor for big business, particularly given rising issues regarding death from overwork in Taiwan. 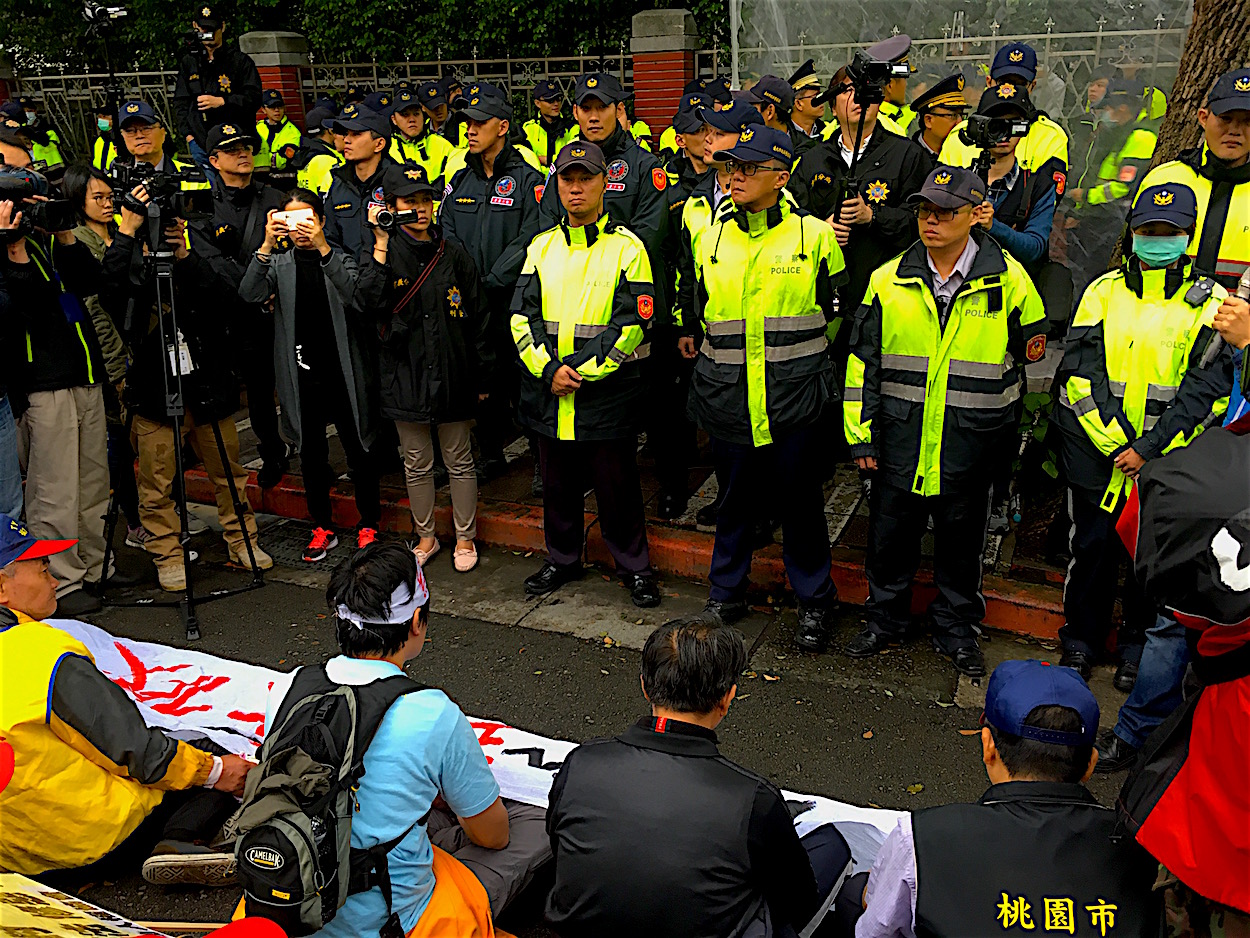 Throughout this riot police were notably heavy in number, outnumbering demonstrators by two to three times. In many cases, riot police did not attempt to block off the road for demonstrators, leading to cases in which buses or trucks from nearby construction came dangerously close to demonstrators. At other times, riot police attempted to restrict the freedom of movement of demonstrators entirely, as observed in attempting to not allow demonstrators from marching around the Legislative Yuan. Reportedly, over 1,000 police officers were mobilized today. 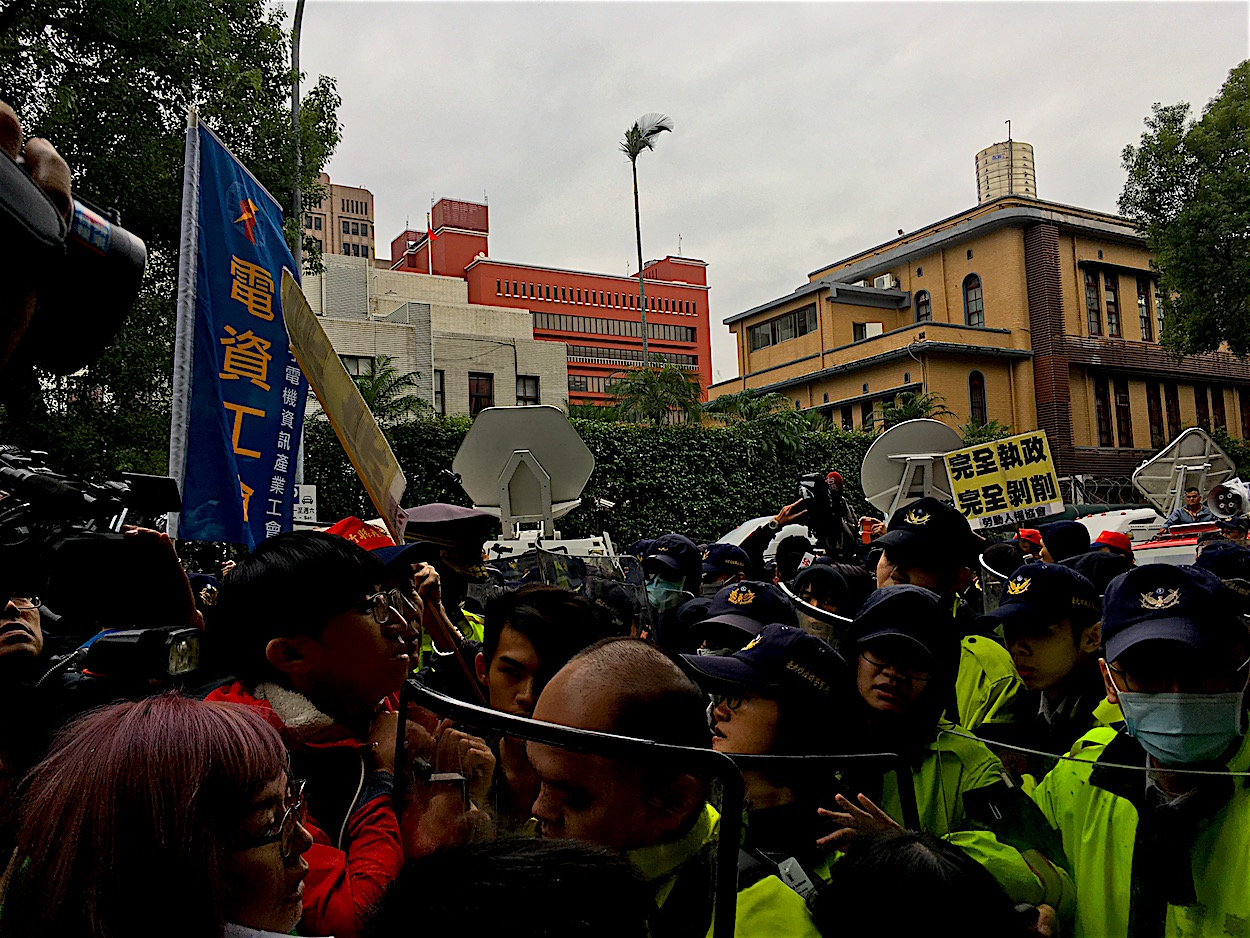 Speakers and participants at the demonstration drew from the full range of post-Sunflower Movement civil society. Apart from the presence of labor groups from all across Taiwan and many different industries, led by the Taoyuan-based labor groups who have been the organizers of many of the Labor protests against the Tsai administration in the past year regarding the issue, participants also included Third Force parties such as the Social Democratic Party, Green Party, and Free Taiwan Party, as well as NGOs including the Taiwan Tongzhi Hotline, Awakening Foundation, Taiwanese independence groups, and even some members of the pan-Blue anti-pension reform demonstrators referring to themselves as the “800 Heroes”, despite their political disagreements with Taiwanese civil society groups largely in favor of pension reform and leaning towards independence. Apart from speeches, organizers also led demonstrators in singing traditional anthems of the Taiwanese labor movement such as the “Workers’ Fight Song”, originally adapted from a Korean labor anthem.

The inside of the Legislative Yuan, too, was chaotic. New Power Party legislator Hsu Yung -Ming launched another filibuster of the bill in the morning, as he did previously for eleven hours on Monday, something which prompted DPP legislator Chiu Yi-Ying to yell at him “Your Sunflower Movement has collapsed!”, words highly provocative of Taiwanese youth activists. But in another strange turn, the KMT would in the mid-afternoon call for discussion of the bill with no set time limit and the DPP accidentally agreed to this notion, which passed by one vote. While DPP majority speaker Ker Chien-Ming is now calling for another vote, this will likely prolong the bill further. Former Sunflower Movement Chen Wei-Ting, now a legislative aide for the New Power Party, would quip on Facebook that this may have been “destiny.” Afterwards, Chiang Wan-An of the KMT began to ask questions of the bill continuously without end as another prolonging effort. But even if the bill is currently delayed, possibly until tomorrow, one can expect efforts by the DPP to ram the bill through to continue. 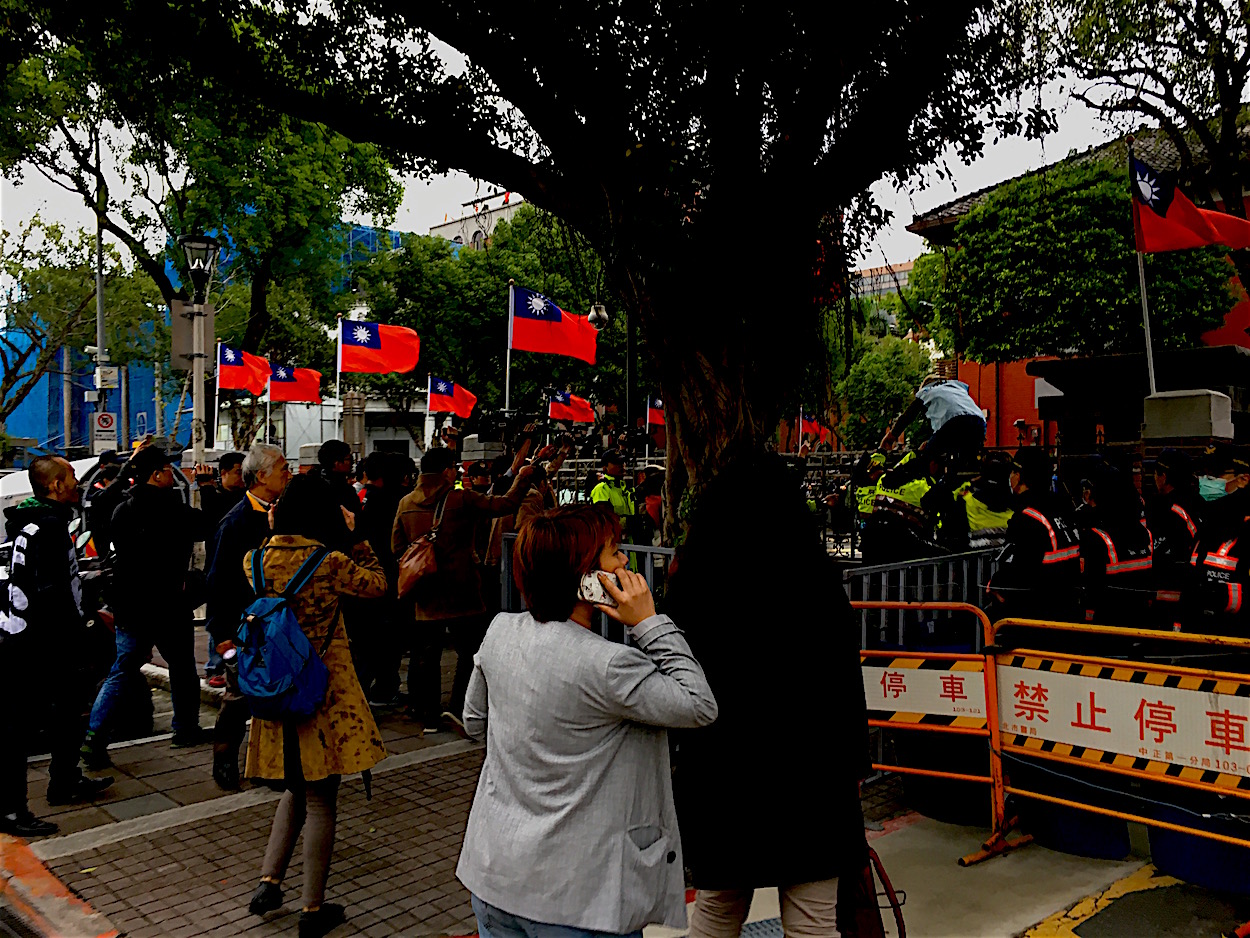 In the meantime, demonstrators have called for further protest to take place at nightfall, when more workers have gotten off work and vowing that this will be a fight to the finish. It may be a long night of protest ahead, then, if protests this morning and in the early afternoon have already been highly intensive thus far.