33 DOMESTIC CASES, 63 imported cases, and zero deaths were reported by the Central Epidemic Command Center (CECC) today. This is slightly down from yesterday’s 34 cases, but Minister of Health and Welfare Chen Shih-chung stated that what is a matter of concern is multiple cases with unknown sources of infection. Only four of the domestic cases were found while in quarantine, with thirteen imported cases found on arrival, and fifty found while in quarantine. There were fewer imported cases due to fewer arrivals today.

More cases were added to the cluster at the Kaohsiung chemical factory, including two children of a previous case, and a co-worker of one of these children. With fewer cases added to this cluster, the situation is primarily thought to be under control.

After a family cluster in Taitung, further cases were found at testing stations. New cases added include the daughter, friend, and neighbor of a previous case. 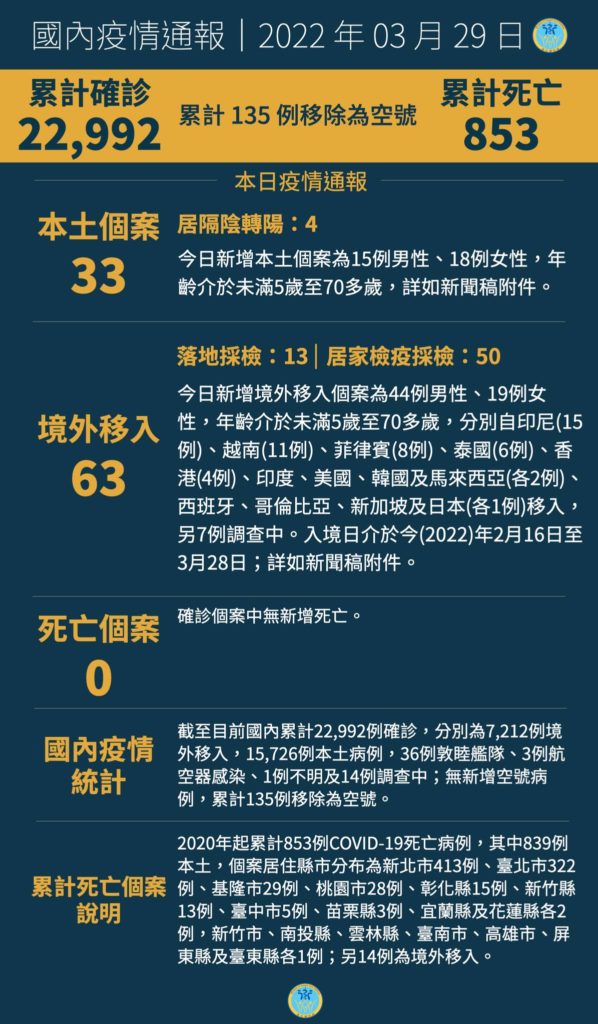 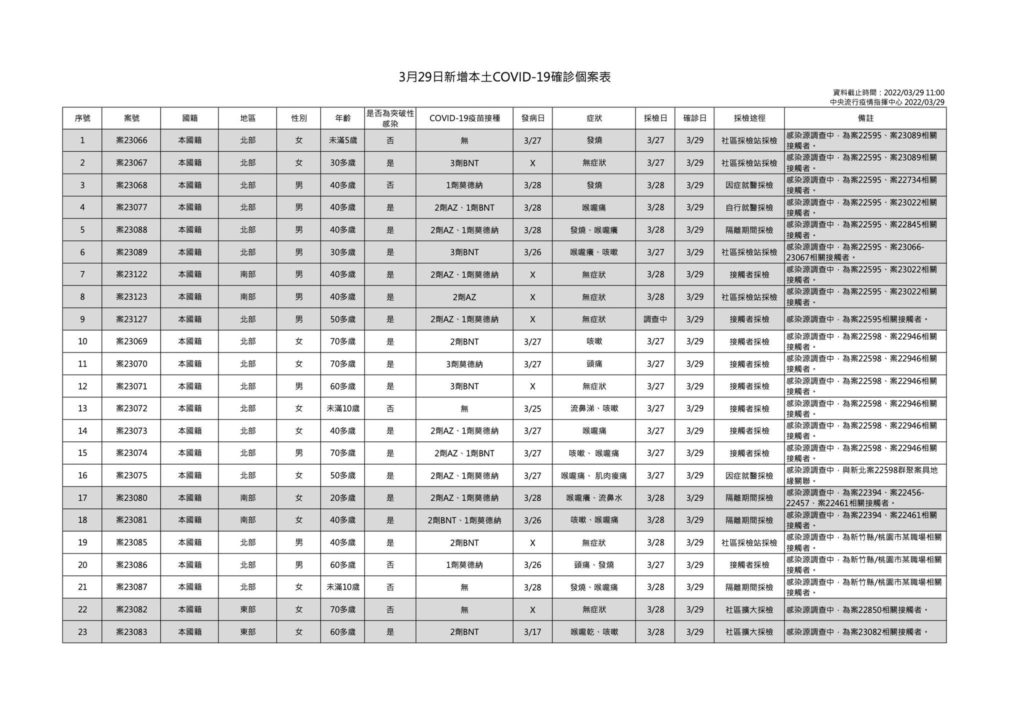 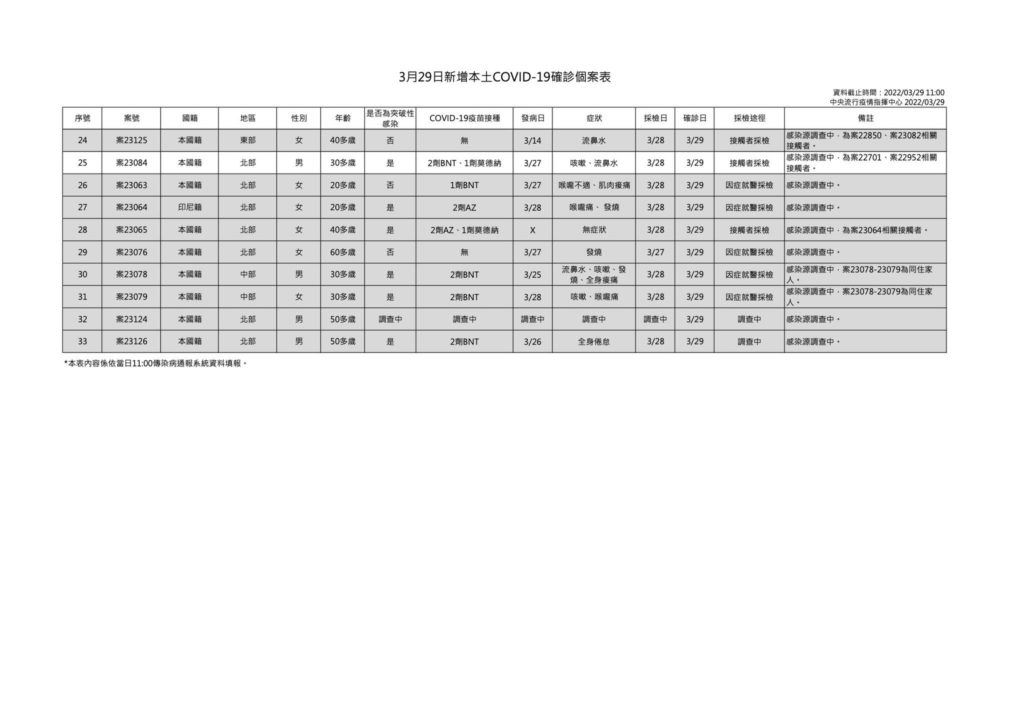 Infographics on the cases from today. Photo credit: Ministry of Health and Welfare/Facebook

Six cases were added in New Taipei from an apartment building, with it unclear as to whether COVID-19 spread through ventilation or due to contacts. Of concern in New Taipei are multiple cases on the same street, including overlapping travel history in a 7/11 that caused a labor insurance phone operator to become infected, and a beef noodle store worker that became infected after working at a different store on a temporary basis.

Three cases were added from the work site cluster in Taoyuan, thought to be at the Datan Power Plant. This includes a manager, a security guard, and a worker on the worksite.

The Keelung cluster that began at an eatery and infected twelve police officers also continues to be of concern. Two of nine cases in Keelung added today were police officers. A physical education teacher working at a college in Taipei was listed, as well as individuals that felt unwell and got tested. 2,664 have been tested at National Ocean University, where a teacher was previously found to be positive, with one case found.

There is some concern from the CECC about an outbreak of cases in Keelung, similar to in Wanhua, partly because of the presence of sex work establishments in Keelung. The CECC has emphasized that three full doses of vaccination are needed for workers and customers at hostess bars, KTVs, and other entertainment establishments going forward. The CECC has asked relevant establishments to draw up lists of workers for screening, but has emphasized that this will not be used for purposes apart from COVID-19 measures, and that it does not mean to stigmatize any profession. The CECC also takes the view that there is greater preparedness in terms of COVID-19 measures compared to last year.

There are a total of seventeen cases with unknown sources of infection, with six transmission chains of greater concern, and a total of nine transmission chains. While Chen Shih-chung stressed concern about the rapid spread of Omicron, the situation is not comparable between Taiwan and other parts of the world currently, as a result of which there are no plans to raise the COVID-19 alert level. At the same time, there are no plans to relax mask wearing on MRTs and in other establishments.

But, to this extent, where religious ceremonies are concerned, ceremonies with more than 500 attendees will need to submit COVID-19 prevention plans to the government ahead of time. Three doses will be needed to participate in ceremonies and fighting to get under religious pilgrimage palanquins is not allowed, as believers view it as auspicious to have a palanquin containing a god to pass over an individual during religious pilgrimages. 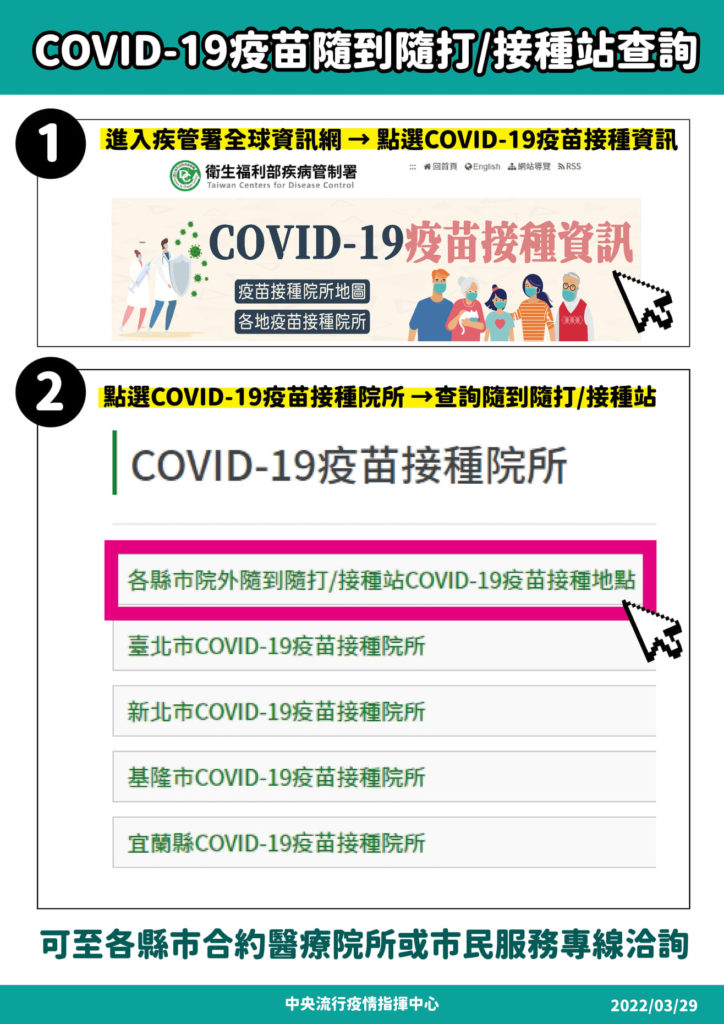 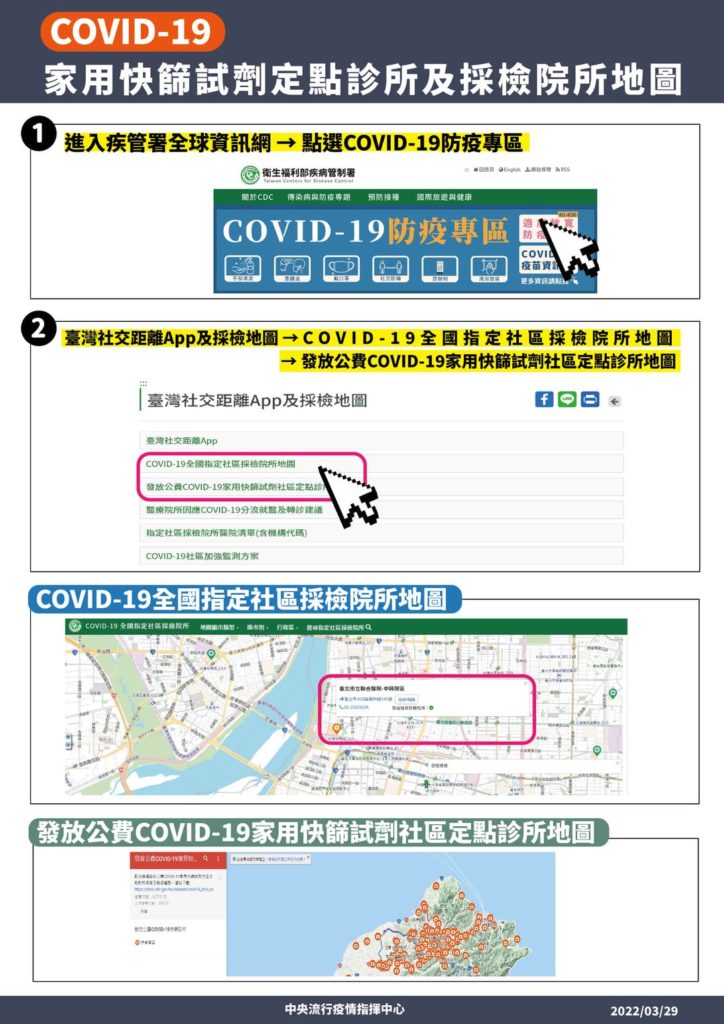 Infographics on the new website for finding vaccination locations (left) and where rapid tests can be found. Photo credit: Ministry of Health and Welfare/Facebook

Plans for future pilgrimages, such as the Mazu pilgrimage, will be made in coordination with local authorities. Live streaming will be used for some ceremonies to avoid crowds and special sites for eating and drinking will need to be set up, with eating and drinking on streets by worshippers not allowed.

Vaccination continues to be low, with 56,602 vaccinated yesterday. First dose vaccination is at 83.39%, second dose vaccination at 78.24%, and booster shot coverage at 49.46%. The 1922 website used for vaccination registration will be shut down on March 31st and a new website showing a map of where vaccines are available will be used instead. Vaccination for those between 12 and 17 using Moderna will be carried out by local authorities going forward, though other vaccine brands can also be used.

The CECC also called on those with overlapping travel history with confirmed cases to get tested, stressing that a map of where rapid tests can be found is also available online. Rapid tests are also available in convenience stores, pharmacies, medical equipment stores, and other places.