DEMONSTRATIONS TOOK place concurrent with ROC National Day celebrations today on Ketagalan Boulevard, with several hundred demonstrators gathering to listen to speeches, sing songs, and to burn a straw effigy dressed in Qing dynasty clothing representative of the “corpse” of the Republic of China. The demonstration began on Ketagalan Boulevard before moving to outside the Chiang Kai-Shek Memorial as a mock funeral procession, then returning to Ketagalan Boulevard before proceeding to the occupation site maintained outside the Legislative Yuan by the Alliance of Referendum for Taiwan. 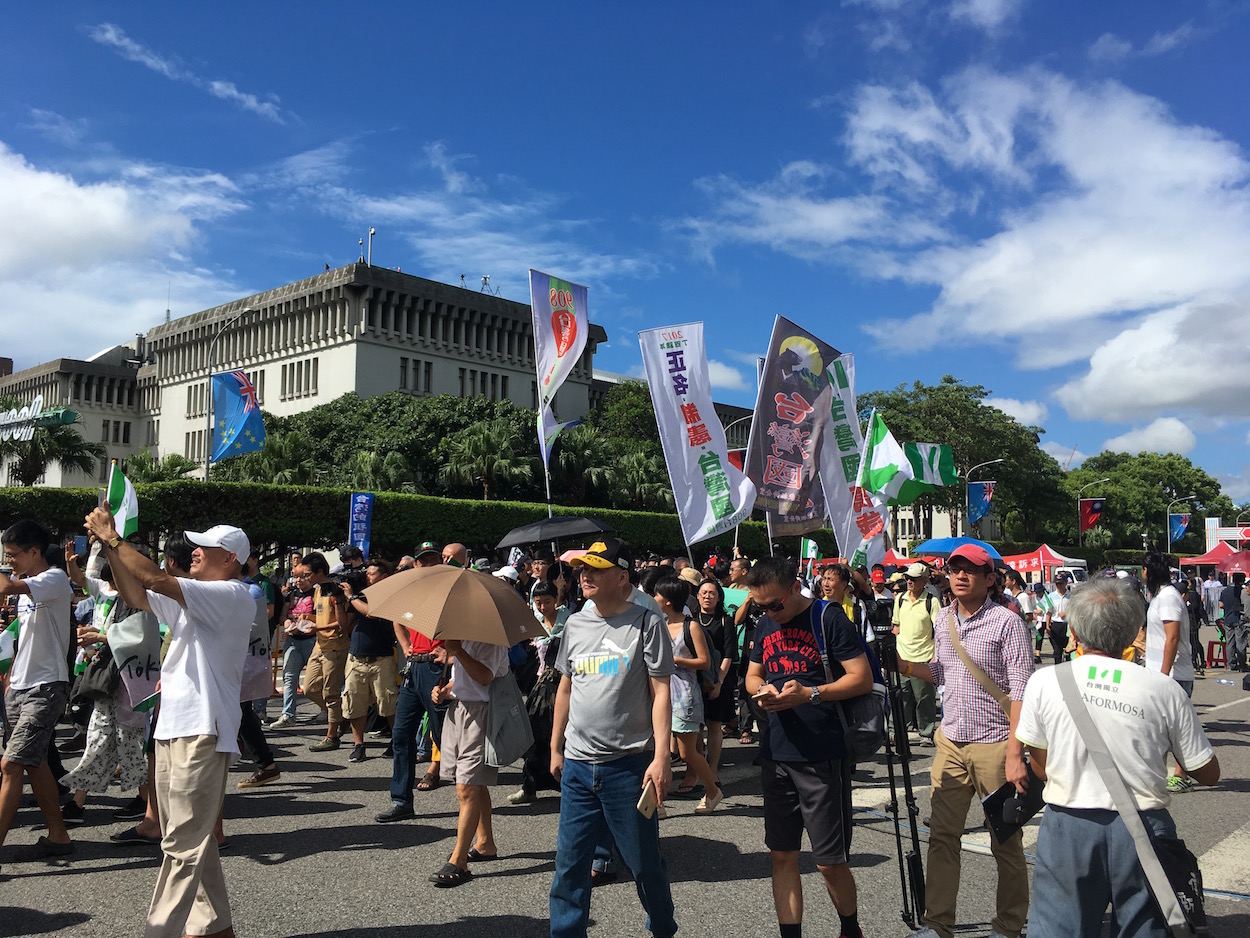 Participating groups included the Free Taiwan Party, Alliance of Referendum for Taiwan, the 908 Taiwan Republic Campaign, and From Ethnos To Nation. While the first three groups are stalwarts of the Taiwanese latter of which is a group of younger Taiwanese independence activists that rose to prominence after member Chen Yu-Chang was arrested for demonstrating outside the Taipei 2017 Summer Universiade with a Taiwan flag. Much of the proceedings were carried out in Taiwanese. Other demonstrators included indigenous protesters calling for the return of their traditional territories, who primarily remained in their occupation site outside NTU Hospital Station, and about a dozen pro-China counter-protesters who called on Tsai to step down and seemed to take the contrasting view that Tsai was pushing for Taiwanese independence.

While burning the effigy of the “corpse” of the Republic of China outside the Chiang Kai-Shek Memorial, police forcibly intervened to put out the fire, with Tsay Ting-Kuei, the leader of the Free Taiwan Party and Alliance of Referendum for Taiwan, being caught up in the ruckus. This would largely be a repeat of a past incident earlier this year in which Tsay was arrested for burning the ROC flag outside Freedom Plaza in order to commemorate the 228 Massacre. The burning of the effigy also featured a mock mourner that cried out, “But you promised to achieve unification!”, and the throwing of rice at the effigy, the throwing of rice at funerals being a traditional Taiwanese practice. 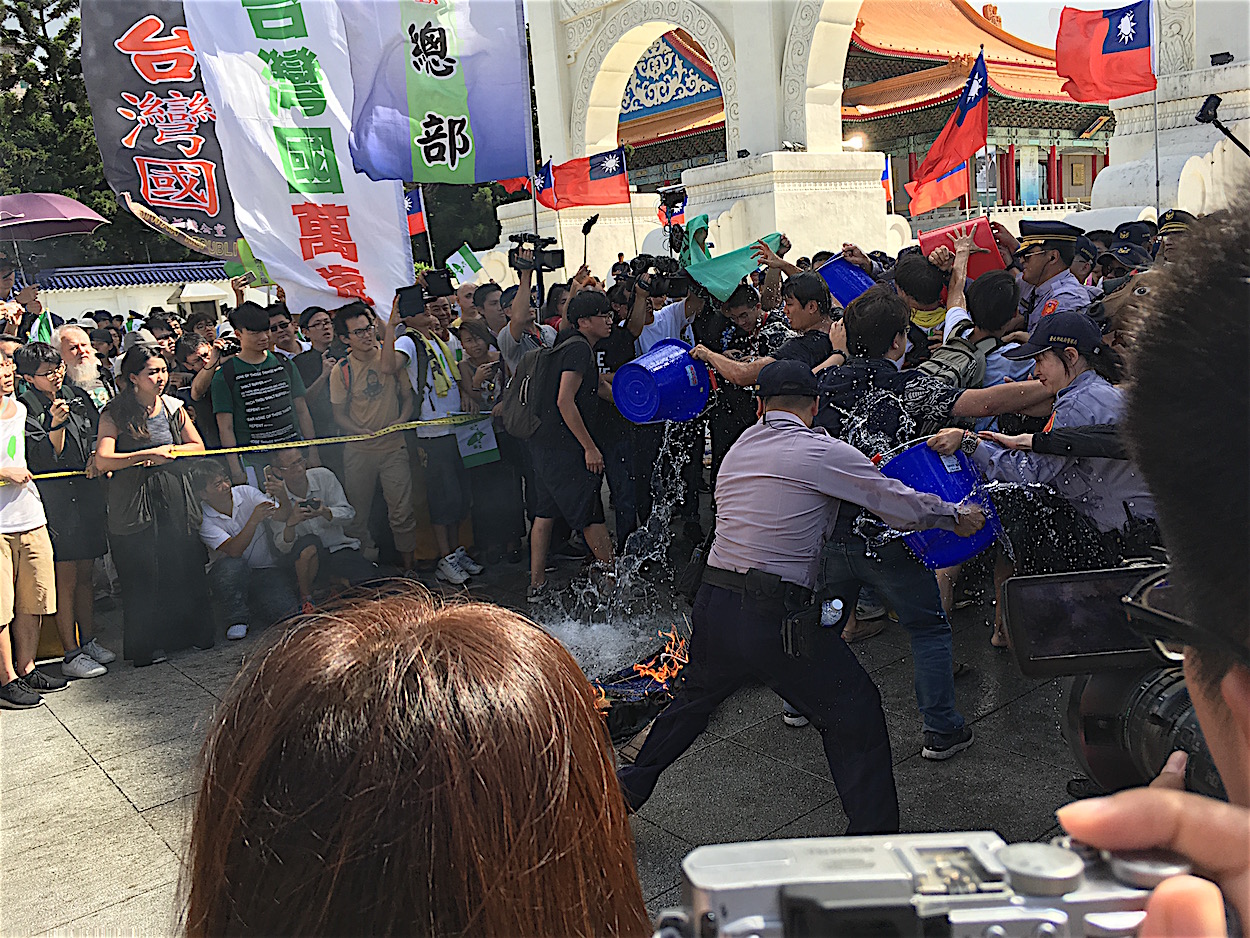 Police putting out the burning of the straw effigy representing the corpse of the ROC. Photo credit: Brian Hioe

Present also at demonstrations was Hong Kong political dissident Lui Chi Hang, who has been on hunger strike since Tuesday of last week outside the Legislative Yuan to call attention to the threat that Taiwan faces from China. Interestingly enough, Lui is known for his opposition to Hong Kong independence but his criticism of China, and was arrested for reading Liu Xiaobo’s essay “I Have No Enemies” and the “Charter 08” manifesto co-authored by Liu out loud in at the Lo Wu Control Point connecting Hong Kong and Shenzhen before being arrested. Lui’s hunger strike was planned to run one week until national day, lasting around 150 hours. 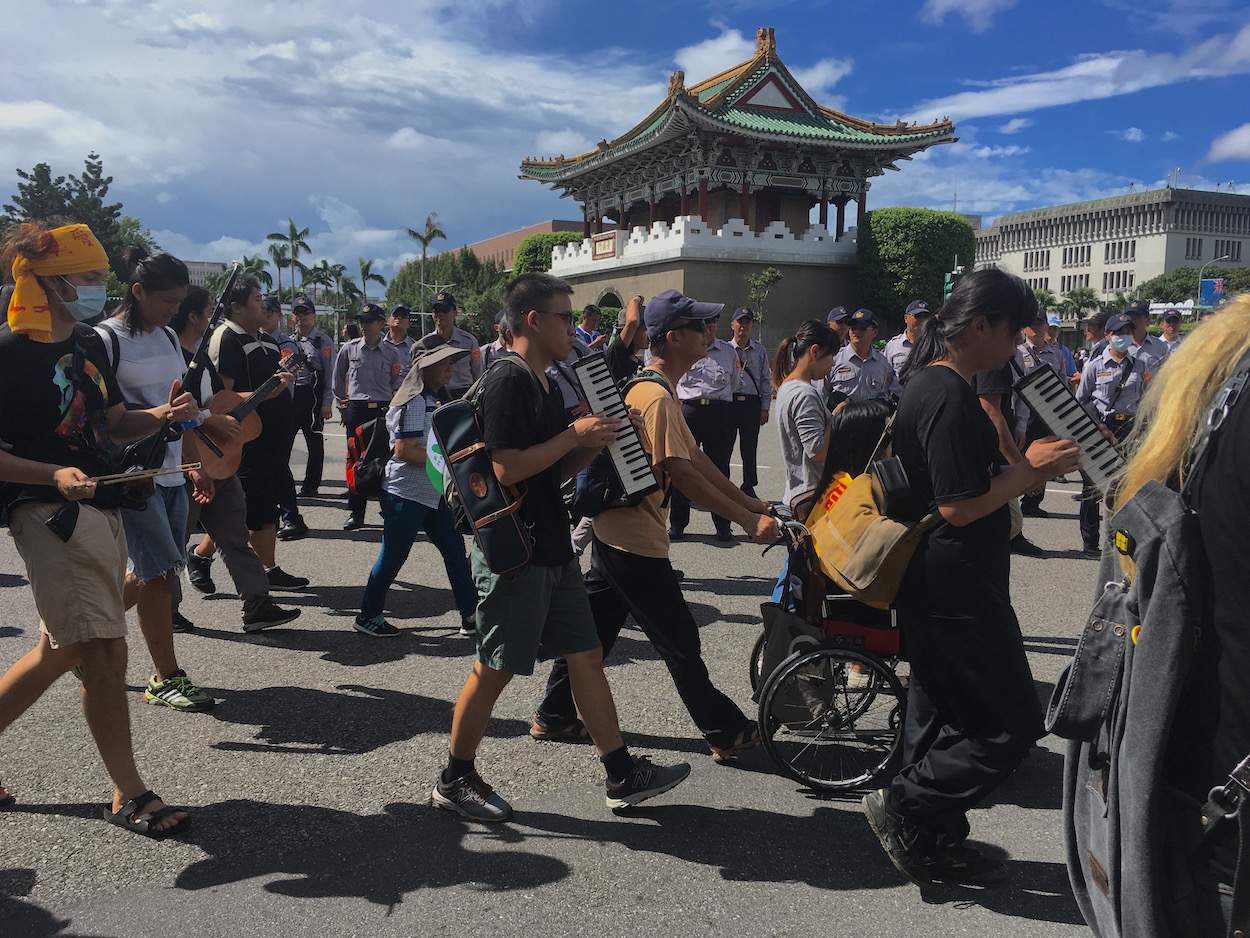 Indeed, despite criticisms from the KMT and other pan-Blue political actors that advertising for ROC National Day this year downplayed traditional ROC imagery which saw this as further attempts by the DPP to facilitate the “de-sinicization” of Taiwan, President Tsai Ing-Wen’s speech referred to the “Republic of China” alongside references to “Taiwan” and called on both pan-Green and pan-Blue political parties to continue to work together to contribute to Taiwanese democracy, claiming a bipartisan aspiration under her governance despite the split between the pan-Blue and pan-Green camp which seems as unbridgeable as ever. As one might expect, Tsai largely devoted her speech to touting policy achievements on a number of fronts, including claiming progress on the 5+2 Major Industrial Innovation Plan, the New Southwards Policy, judicial reform, pension reform, addressing Taiwan’s housing problems, drug crackdowns, improving Taiwan’s childcare infrastructure.

More ambiguously, Tsai also seemed to call on China to turn over a new leaf in terms of cross-strait relations, stating that this year was thirtieth anniversary of cross-strait exchanges between Taiwan and China, that there are means for Taiwan and China to live in peace, and that Taiwanese and Chinese young people can have fruitful and productive exchanges. At the same time, shortly before such comments, Tsai stated that Taiwan needs to reform its military, not with any aim of fighting war, but in order to maintain peace, and afterwards Tsai reemphasized the importance of Taiwan building economic and political ties with Southeast Asian countries, building NGO and civil society ties with Southeast Asian countries as a means for Taiwan to develop as a regional leader and take a leading role in this, likely with the view that this is a means for Taiwan to have strong non-official diplomatic relations with Southeast Asian countries. 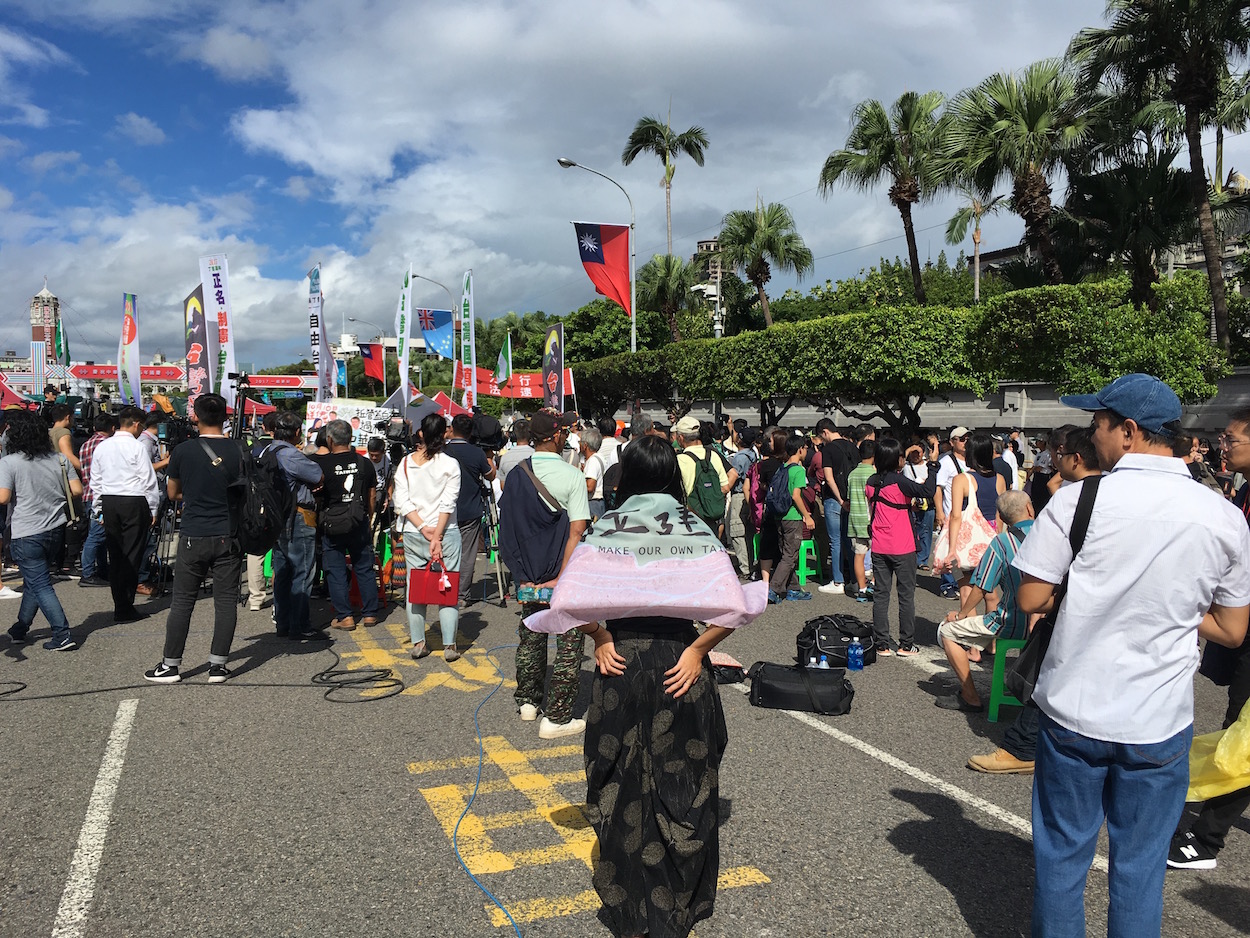 Much of Tsai’s comments, however, are nothing new, largely returning to campaign promises by Tsai during 2016 elections and either asserting successes in fulfilling these campaign promises or the continued need to work on these tasks. On the other hand, it remains to be seen if China will take up what appear to be calls by Tsai for a new leaf in terms of cross-strait relations, but one generally suspects that this will not happen. Tsai may also receive censure from members of Taiwanese civil society for failing to raise the Lee Ming-Che kidnapping, an incident of a Taiwanese NGO worker being kidnapped by China, or that even apart from the debate between ROC and Taiwanese independence, Tsai is not taking enough steps to make Taiwan’s independence more secure, as seen in the Tsai administration backing away from efforts to gain admittance for Taiwan to the United Nations.

As such, following Tsai’s speech on ROC National Day and following protests by Taiwanese independence advocates today, it is to be seen what path Taiwan will take in the future regarding its international status. Much of this, too, depends on what actions China decides to take towards Taiwan in the future following the 19th Party Congress of the Chinese Communist Party later this month. Taiwan’s issues regarding ROC versus Taiwanese independence remain unsettled, as does the issue of how Taiwan is to take steps to deal with Chinese threats to its de facto independence, or to otherwise secure its de facto independence in a more permanent manner.