OUTRAGE HAS ensued in Taiwan with the revelation that the official media guide for the Taipei Universiade refers to Taiwan as “Chinese Taipei”, in fact, rather comically stating that “Chinese Taipei is long and narrow that lies from north to south.” While, of course, this is indicative of the poor English writing in the official media guide, one wonders, what exactly is the word that is left out in this sentence? A “long and narrow island”, given that Taiwan is usually thought as an island without reference to the minor islands which are also a part of its territory? A “long and narrow city-state”, as the use of “Chinese Taipei” seems to suggest in referring only to the capital city of Taiwan, Taipei, and no other cities in Taiwan, although contradicted in ludicrous fashion by references in the guide to Taipei as one of the cities of Chinese Taipei? Or a “long and narrow nation-state”?

As such, it is not surprising that outrage has followed from the public, with criticisms in particular coming from New Power Party politicians Huang Kuo-Chang and Freddy Lim. Both called attention to the travesty of this being how Taiwan represents to the international world even for an international sporting event which takes place within its own borders, as well as the poor English writing of the guide. Such would be the absurdity of Taiwan’s international status in which Taiwan is not only unacknowledged by the majority of the world’s countries despite being a de facto independent nation-state with its own government, economy, currency, military, and passport due to Chinese pressure, but Taiwan is also known internationally as the Republic of China due to the continued existence and constraints of the ROC framework. A protest is also planned for this upcoming Saturday. 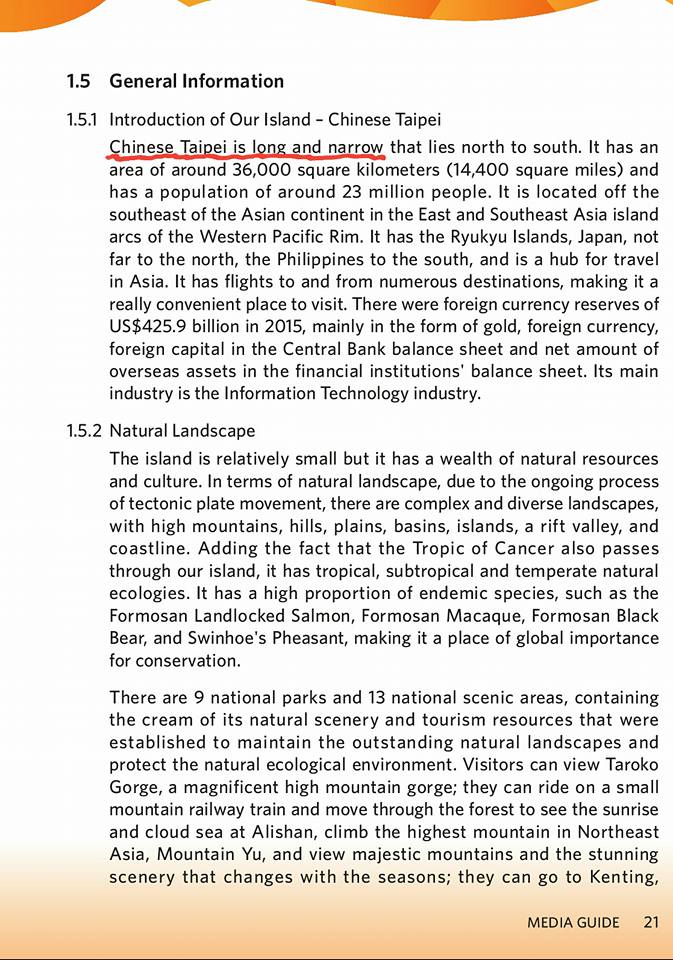 The relevant page from the media guide for the Taipei Universiade. Photo credit: Huang Kuo-Chang/Facebook

Taiwan, then, suffers doubly from its orphaned status internationally but also the indignity of being a country which is not even referred to by its own name. Indeed, although the ROC framework is not a mere name, but a juridical framework which is one of the factors preventing international recognition of Taiwan as the de facto independent nation-state it is, knowing the power of names, China state-run media makes it a point to only refer to Taiwan as the “Taiwan region” (台灣地區) in order to suggest at all times that Taiwan is only small enough to be a region of China, and to suppress mention of Taiwan having a different set of laws or government than China. As such, although also somewhat oddly phrased in English, the longstanding demand of the Taiwanese independence movement to “Let Taiwan be Taiwan” is both a call for Taiwan’s de facto independence to be recognized by the rest of the world, as well as an evocation of the fact that this will only come hand-in-hand with a correction of names for Taiwan, so to speak.

In particular, Taipei mayor Ko Wen-Je has stressed that the Taipei Universiade will be an opportunity to put Taiwan on an international stage. Nevertheless, this is not the first time that Ko has come under fire for the perceived indignities that he is seen as putting Taiwan through with his actions. Ko previously came under fire for city-level exchanges with Shanghai in his position as Taipei mayor where Ko seemed to stick to the Chinese script in claiming that people on both sides of the Taiwan Straits share a common destiny and are family, something Ko defended as being necessary for him to say in order to ensure that city-level exchanges between Taipei and Shanghai continue to happen. Ko was originally elected in 2014 with the support of post-Sunflower Movement youth activists that saw him as a pro-Taiwan candidate favorable to a DPP mayor, but Ko’s actions in the years since then on a number of issues ranging from Taiwanese independence to casual sexism to going back on election promises regarding urban demolitions has led many to reevaluate their perceptions of Ko in 2014.

In order to ensure that the Taipei Universiade, the high-school and college level equivalent of the Olympics, is a genuinely international event, Chinese participation would be required. For Ko, who has staked a large amount of political capital on the success of the Taipei Universiade, this may in part be why Ko was willing to make such compromises with regard to representation of Taiwan–although Ko has caused controversy in the past for being unwilling to part with symbols of the ROC such as taking a stand against the dismantling of Chiang Kai-Shek statues and praising leaders venerated in ROC hagiography and praising Chiang Ching-Kuo, never mind both Chiangs being authoritarian dictators. This was not enough to prevent Chinese athletes from withdrawing from group competitions and refusing to attend the opening ceremonies of the games, however, due to restrictions placed on athletes by the Chinese party-state. 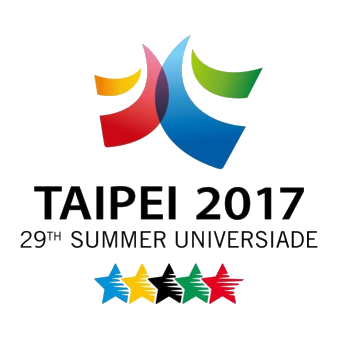 Will Ko’s Universiade gamble pay off? One suspects not, given that scandals have already occurred regarding the selection of athletes representing Taiwan, the construction of key venues for the competition such as the Taipei Dome, and lackluster ticket sales. Actually, despite the significance of the Universiade for high school and college athletes hoping to go pro, the Universiade is not an internationally known event, and so it is not really surprising that Taipei city residents seem to feel rather disconnected from what should ostensibly be a major event taking place in their city. And given the controversies which have taken place to date, one wonders if the games will in fact be damaging of Taiwan’s reputation much as the 2016 Rio Olympics were for Brazil largely because of endemic government corruption, never mind that they were expected to show Brazil’s entrance into the world stage as a growing economic power. Blame for the indignities which result from Taiwan’s use of the “Chinese Taipei” moniker in the Universiade may ultimately be placed at Ko’s feet by members of the public.

Nevertheless, this would merely be another sign of how far Taiwan has to go in terms of normalizing its international status. Calls for this have been on the rise in Taiwan, especially as the ROC continues to atrophy diplomatic allies to China, but Taiwan’s politicians may have heretofore simply proved too timid in terms of what are supposedly billed as attempts to assert Taiwan’s de facto independence on the world stage. More pressure may be needed on high-profile politicians such as Ko or President Tsai Ing-Wen from members of the public, then.