THE PARTY POLICY presentations which took place on December 6th, as organized by the Citizens’ Congress Watch, largely proved a non-starter in terms of genuine debate between the parties. Instead, debate largely took place between the pan-Green and pan-Blue alliances.

The televised policy presentations which are organized every election in Taiwan are generally de facto debates, even if they are not technically debates. Participant parties in the policy presentation included the Democratic Progressive Party (DPP) and KMT, as Taiwan’s two major political parties, and smaller pan-Green and pan-Blue parties such as the New Power Party (NPP), Taiwan Statebuilding Party (TSP), Green Party, Taiwan People’s Party (TPP), People First Party (PFP), and New Party. 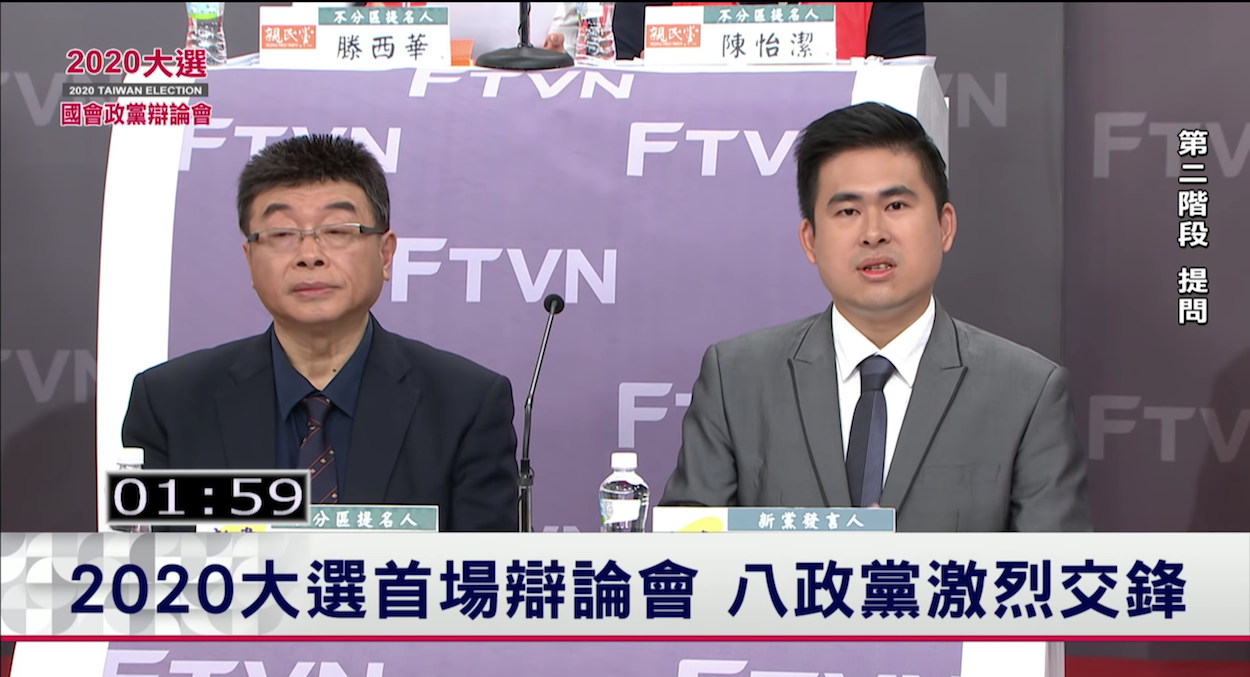 One can observe in the debate how the battle lines between both political camps have been sharply drawn going into the 2020 elections. The KMT and affiliated parties of the pan-Blue camp are highly emphatic on using allegations of the DPP conducting a “Green Terror”, using disinformation on social media to slander the KMT.

Pan-Blue parties accused the DPP of being dangerously provocative of China through an unclear stance on Taiwanese independence and a refusal to acknowledge the 1992 Consensus. It was claimed that the DPP was governed by party factionalism, with DPP party factions seeking to benefit themselves rather than work for the good of the Taiwanese people and that the DPP had failed to enact policy beneficial to the Taiwanese people, as observed in the DPP’s lackluster attempts to stimulate the economy and attempts to phase out nuclear power when problems of air pollution seem to be growing worse in Taiwan. These accusations have generally been echoed by the pan-Blue camp’s presidential candidate, Han Kuo-yu, in the three presidential policy presentations and debate.

Indeed, in terms of such rhetoric against the DPP, there was rather minimal difference between the KMT representatives at the debate and representatives of hardline deep Blue parties such as the New Party, which was represented by Chiu Yi and Wang Bing-chung. Chiu is a former legislator, known for comments suggesting that the decapitation of Taiwanese independence activists would be justified. Chiu was originally a KMT party list candidate, but was removed from the list after public blowback. Chiu subsequently was recruited by the New Party as a candidate. Wang, on the other hand, was previously questioned by the Tsai administration on charges that he hoped to start a Chinese spying ring in Taiwan through an online media outlet that he and other New Party young spokespersons ran. Despite Wang’s accusations against the DPP of political persecution, one notes that Wang remains a free man, one free to make televised public appearances to express his political views. 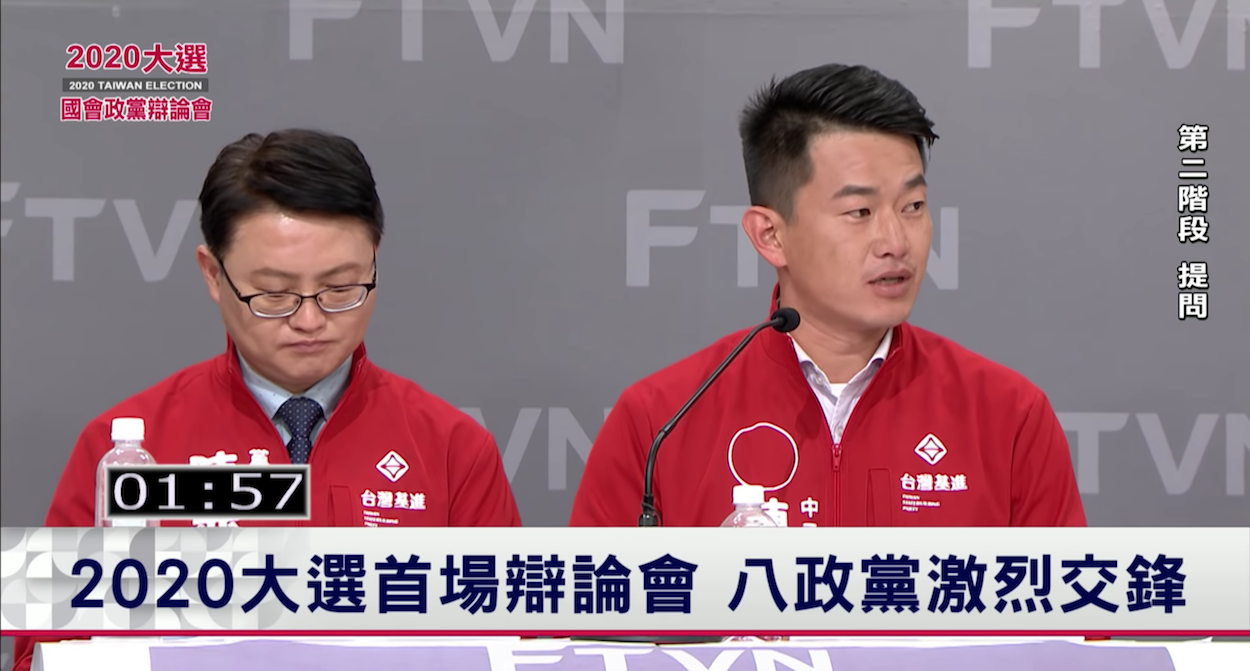 Overall, pan-Blue parties otherwise were fairly minimal in terms of proposed policy, with a large focus on attacking the DPP.

One notes that during the debate, third parties sought to strongly assert their own party identities. For example, as the party most emphatic on Taiwanese identity out of all of the third parties, the Taiwan Statebuilding Party—whose representatives, party chair Shinichi Chen and legislative candidate Chen Bo-wei, primarily spoke in Taiwanese during the debate, was among those most strident in attacks on the KMT. The Green Party presented itself as defending Taiwanese sovereignty issues on the basis of protecting the environment. This minimized space for the NPP to firmly distinguish its party identity among the third parties, seeing as it is a party that emphasizes both the defense of Taiwanese sovereignty and progressive left-wing values.

But smaller pan-Green parties generally refraining from attacking the DPP each other and concentrating questioning on the KMT, as the primary pan-Blue party, during the policy presentation. The NPP, Taiwan Statebuilding Party, and Green Party have historically been critical of the DPP, but they refrained from criticism of the DPP during the debate.

Third parties were, however, questioning of the TPP, calling into question to what extent the TPP stood for the defense of Taiwanese sovereignty. The TPP claims to be politically independent of both the pan-Blue and pan-Green camps and includes candidates who have, in fact, been open about their support for Tsai Ing-wen. At the same time, the TPP does slant toward the pan-Blue camp in terms of the composition of its candidates and Taipei mayor Ko Wen-je, the central figure of the party, has been observed to have drifted more closely toward the pan-Blue camp in the past few years. 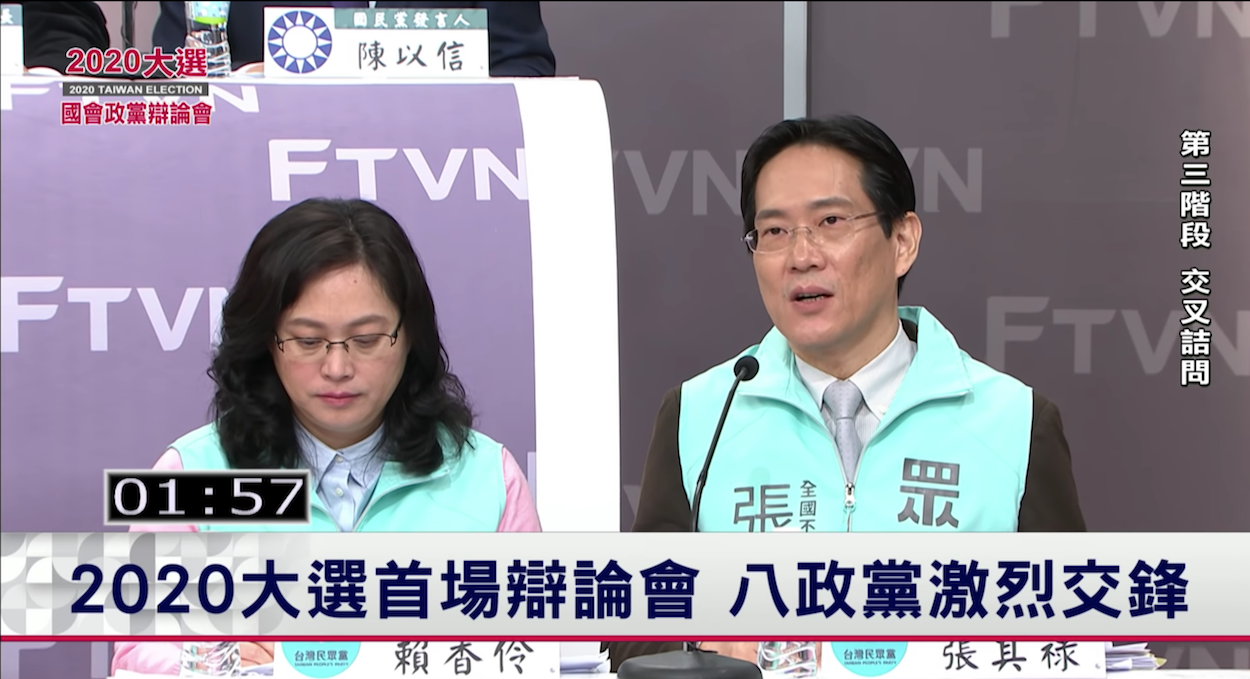 For their part, TPP representatives attempted to claim that their party was one that was not factional and which did not have a rigid party line, hence the sharp ideological differences between some of the candidates present in the party. At the same time, TPP representatives attempted to claim that the party was one which did, in fact, stand for the defense of Taiwan’s sovereignty and not one which would sell out the country.

It remains to be seen what the electoral outcomes that affect the parties that participated in the debate will be, going forward. This will become more clear with elections.