A CONTROVERSY has broken out following an online video released by college athlete Mitzi Ting (丁聖祐), a senior at the National Taiwan University School of Business Administration and a top-ranking competitive swimmer, regarding the selection process for participants in the Taipei Summer Universiade. Ting alleges that the selection was process was shaped by nepotism and lacking in transparency, as observed in the presence of two high school students on the list because the father of one of them is an influential swim coach and the father of the other is friends with an influential swim coach. Ting likewise pointed to that not all of the competitors chosen for competition had the highest scoring times in their categories, that in some categories a plethora of athletes were chosen, and that in other categories no athletes were chosen at all. At the time of publication, the video has reached the #3 position for trending videos in Taiwan on YouTube, with over 375,000 views.

As a national record setter in recent swimming competitions earlier this year and a gold medalist in the National Intercollegiate Athletic Games several times over, Ting stated that she should have been chosen to compete, but that she was not and that, while she did not call for others to withdraw in her place and is not making these accusations out of resentment, Taiwan’s athletics system is marked by internal corruption in which nepotism and personal connections wins out over the skill level of athletes, seeing as sports bodies such as the Chinese Taipei Swimming Association do not publicize the criteria by which they chose competitors for international competitions and instead make nominations through a committee. This “black box” process allows for nepotism and personal favoritism to win out over skill and athletes are afraid to speak out for fear of punishment.

This would not be the first time that high-profile athletes in Taiwan have accused sports bodies in Taiwan of internal corruption, favoritism, and lacking transparency. Badminton champion Tai Tzu-ying, the No. 1 world ranked badminton player in Women’s Singles, has alleged punishment from sports bodies because of being forced to wear attire from the sponsors chosen by sporting bodies, even if this was ill-fitting and hindered performance on the court. Tennis player Hsieh Su-Wei, at one point the no. 23 in the WTA Tour singles rankings and the highest ranked female Taiwanese tennis player in history, has also alleged being denied allowed her own coach, instead being forced to use the coaches provided with her by sporting bodies, and being arbitrarily denied participation in sporting events as punishment for resisting, with claims that she did not register properly. As a result, Hsieh last year vowed to never again play tennis for the Taiwan national team, citing bullying which has gone on for decades.

Similarly, as someone who has a history of calling for reforms and greater transparency in sports bodies in Taiwan and someone without the backing of influential sports coaches, Ting alleges that she is being punished. Ting has been a participant in events organized by Fair Game! Taiwan! in the past, an organization which calls for reform of Taiwan’s sporting bodies, and her YouTube channel has featured discussion of issues of transparency and resource distribution in sports bodies in the past, and Ting suggests that she is being punished for this. 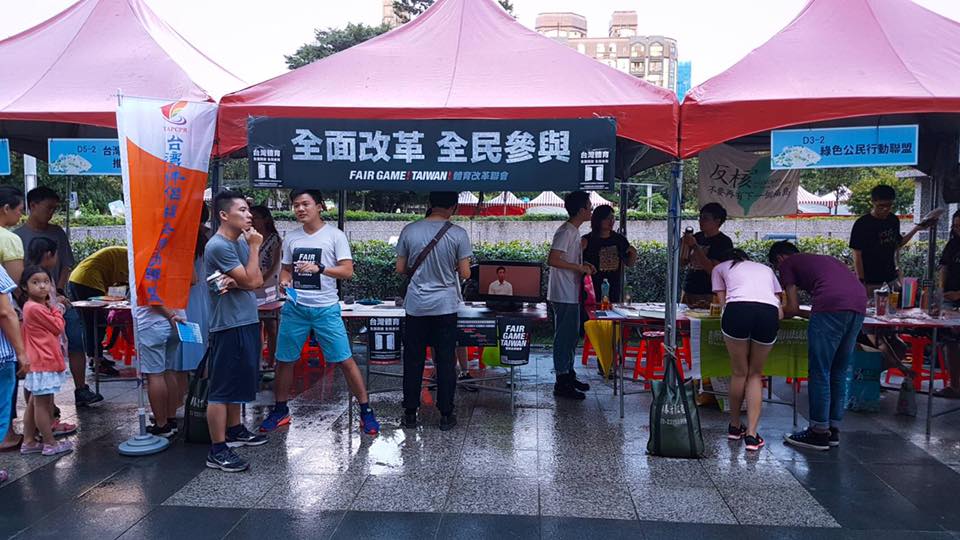 Fair Game! Taiwan! (體育改革聯會), which consists of athletes both current and retired athletes and runs a Facebook page with close to 25,000 likes, is a group which calls for amendments to the National Sports Act, stating that compared to other countries, Taiwanese athletes do not receive sufficient support from the government, whether that is with regards to training, the resources devoted to transportation that athletes need to travel to sporting events, sponsorship or other costs, and that there is a lack of transparency of what these costs are, even if athletes state that they will foot the bill for travel and participation themselves because of limited government resources. Recent accusations by Fair Game! Taiwan! seem to have recently led to the opening of an alleged graft in hockey sports bodies, seeing as hockey players were charged exorbitant fees to pay for participation in international leagues, much less that they were made to pay the cost of their own tickets.

Like Ting, athletes claim that they are not seeking a bigger piece of the pie or to hog disproportionate resources, but that they are facing problems which may stem from internal corruption in Taiwan’s sporting bodies, never mind that the government still trumpets Taiwanese athletes as representatives of the country nonetheless. Sporting officials, whose appointments come from the period of KMT rule and whose actions are deeply linked to KMT clientelist networks, are sometimes seen as receiving kickbacks from corrupt sponsors, bribes in order to influence their selection of athletes, or otherwise favoring individuals with ties to them. Furthermore, athletes claim that utilizing the general lack of transparency about the criteria by which athletes are chosen, sporting officials are sometimes accused of favoring individuals with personal ties to them, or using their ability to influence the choice of athletes as a form of coercion, such as using this as a means to force athletes to sleep with them. 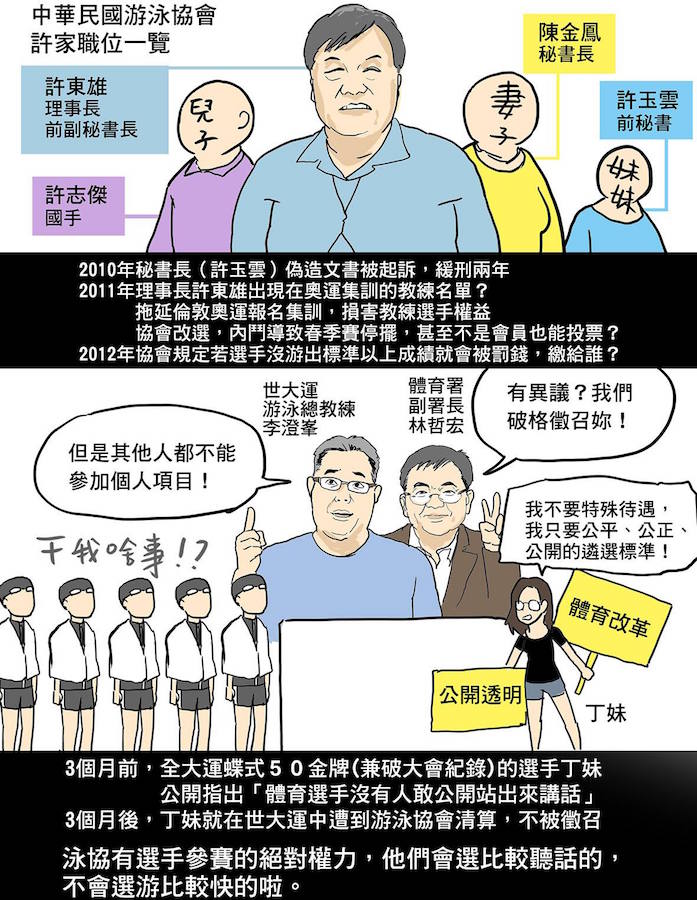 Calls for reform of Taiwan’s sporting bodies and the clearing up of murky process of sports selection, then, have been embraced by youth activists and members of Taiwanese civil society. This may be unsurprising, given trends in Taiwanese identity in which sporting events are frequently a site of contestation about identity in a variety of sports, including esports, and general backlash against KMT corruption. But calls for clearing up internal corruption within Taiwanese sporting bodies have taken place for years. Under the present DPP administration, the first political administration in Taiwanese history in which any political party outside of the KMT has controlled legislature, can reform finally occur? That remains to be seen, but notably young Taiwanese athletes organizing on their own through social media has provoked effective thus far in getting their message out into Taiwanese society. We will we see as to whether further reforms happen, then.