167 DOMESTIC CASES were reported at the Central Epidemic Command Center (CECC) press conference today, along with three imported cases. 18 deaths were announced. This continues the trend of cases this week primarily being in the hundred range.

Cases were concentrated in the greater Taipei area, with 65 cases in New Taipei, 50 cases in Taipei, and 21 cases in Miaoli. There were 14 cases in Taoyuan, eight cases in Hualien, five cases in Hsinchu County, two cases in Keelung, and one case each in Kaohsiung and Taichung.

Minister of Health and Welfare Chen Shih-chung stated that the situation seemed to be more under control in the greater Taipei area, though this did not mean that measures should be slackened. It is possible that cases may increase in Miaoli over the next few days, with second and third-round testing among high-risk migrant workers ongoing in the next few days. 20 of the 21 cases reported in Miaoli today are from migrant workers already under quarantine who are being tested in this group, with the CECC having warned that cases could increase by 150 to 200 in Miaoli in the coming days as a result of testing. 40,000 to 50,000 tests are being conducted daily in Taiwan. 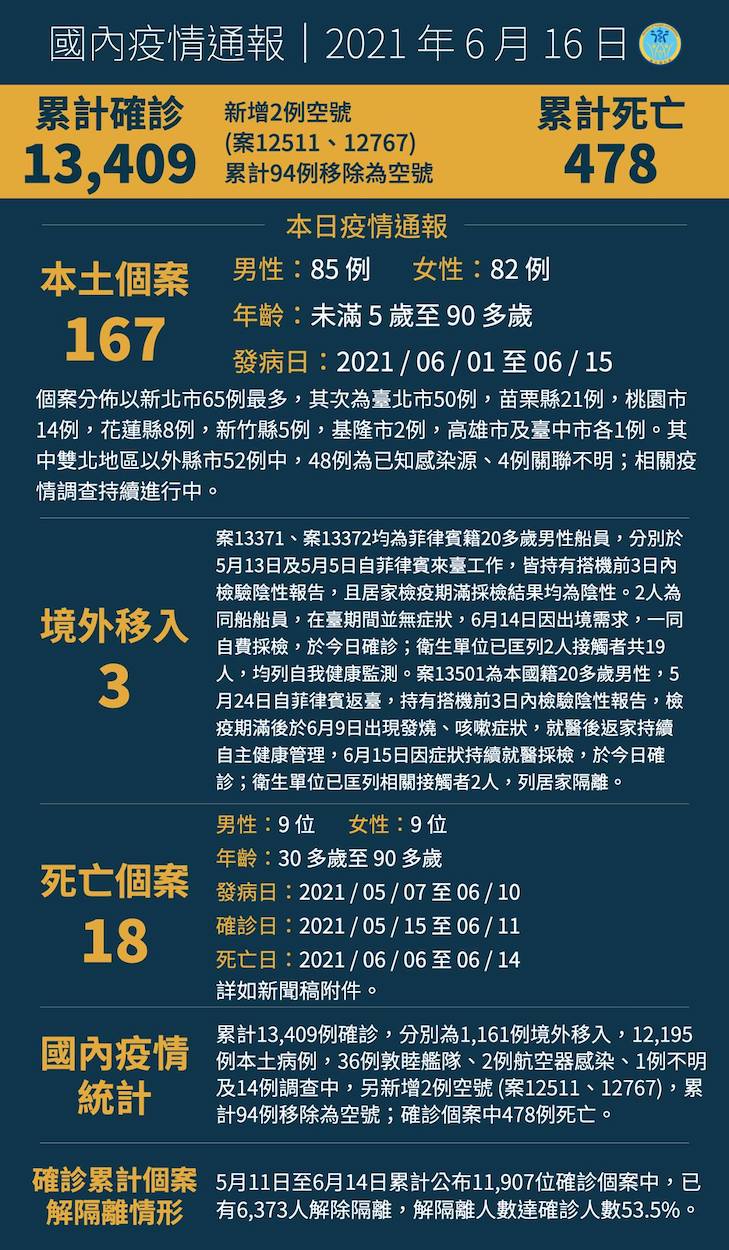 Some adjustments had been made to the CECC’s current measures, with the Ct value required to be released from quarantine lowered. The CECC has stressed that this is not due to any relaxation of standards, as well as that Taiwan is not defying international standards, but that this is due to adjustments to ensure that hospital capacity is reserved for those that need it, seeing as individuals can quarantine at home.

There are no current plans to relax quarantine for fully vaccinated individuals returning from abroad, due to fears that this would lead to the spread of COVID-19 at a time in which the current outbreak is still being managed.

In starting to test wastewater for COVID-19, for the CECC, this is less concern about wastewater passing on COVID-19, but using this to track down individuals positive with COVID-19 nearby. Testing will be conducted at the 11 wastewater treatment plants in Taiwan twice a month. COVID-19 has been detected in two wastewater plants, but this is not to the levels where this would be contagious, and wastewater is treated to ensure that contamination does not take place.

With donations from the public having allowed for purchases of high-​flow nasal cannula machines—though some were already purchased by the government—not all of these will be used right away. This is due to declining COVID-19 cases, with adequate bed capacity.

KMT legislator Yeh Yu-lan has apologized after proposing to cut the allocation for literature and the arts in relief funds for industries affected by COVID-19. Yeh claimed this would save 400 million NT, but this proposal was criticized by art workers.

Some DPP legislators have called for the relaxation of limits on the number of employees that a business must have to apply for relief funds, seeing as some businesses may be small or family-run.

Former DPP legislator Shen Fu-xiong has called on Chen Shih-chung to revoke the current level three alert, claiming that most new infections are among families. By contrast, former vice president Chen Chien-jen, who was the epidemiologist that led Taiwan’s fight against SARS, has emphasized the current need to lower daily cases to below one hundred cases per day. 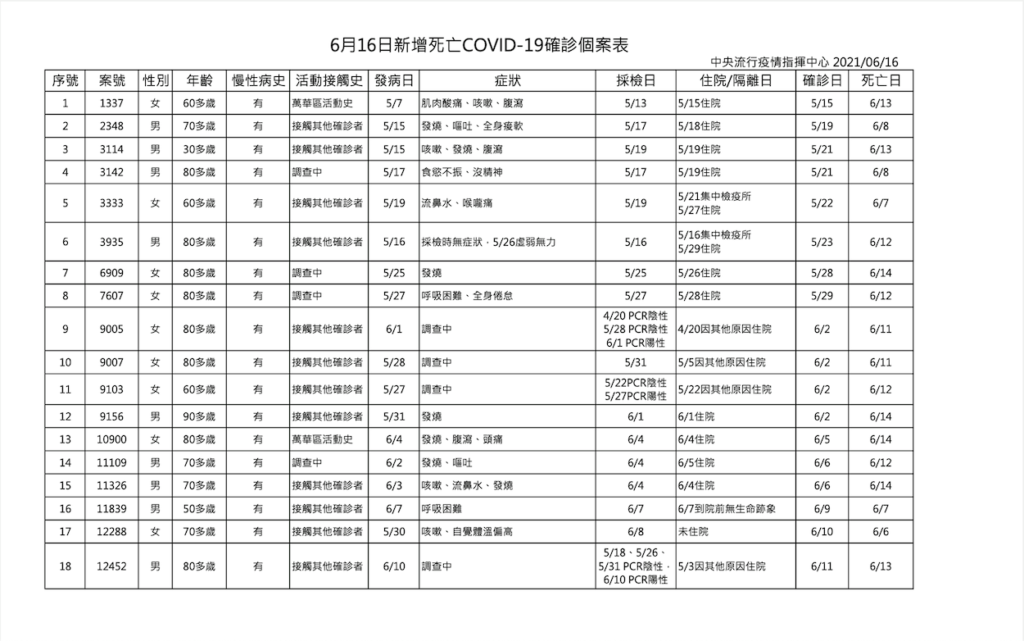 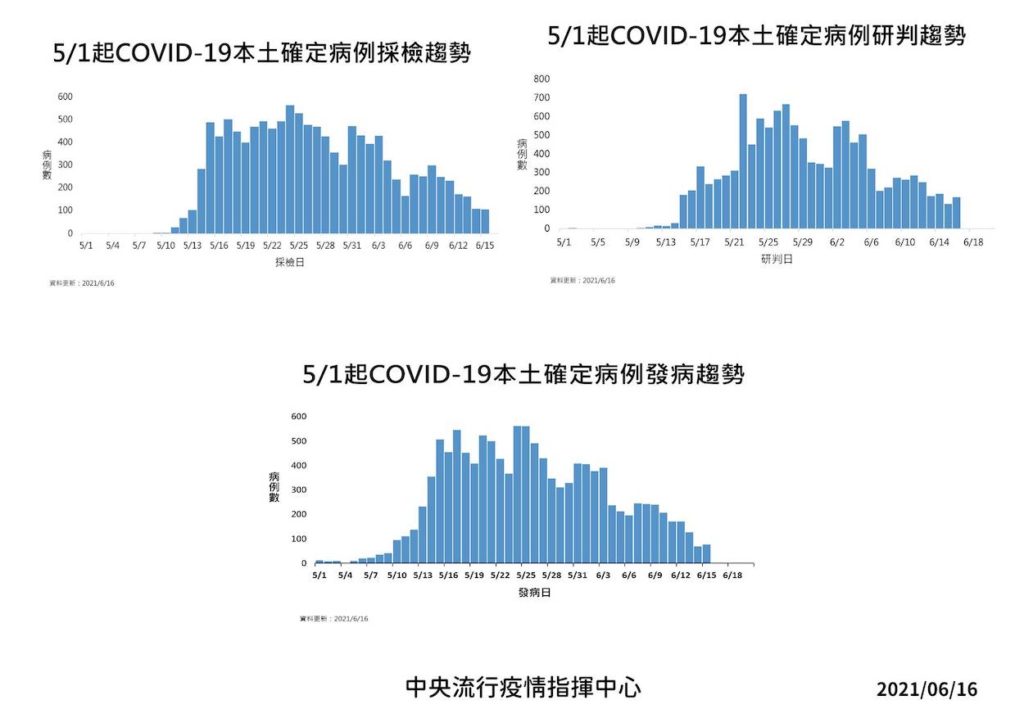 Information on the newly announced deaths (left) and further data released by the CECC today. Photo credit: Ministry of Health and Welfare

Comments by Taipei city councilor Miao Poya led to controversy after Miao referred to the nation as “following greater Taipei into jail”, given that COVID-19 cases are far less common outside of New Taipei and Taipei.

Home-based testing kits imported from abroad are scheduled to arrive in Taiwan next week. One of the test kit brands costs 2,500 NT per kit, which has been criticized for being expensive. Chen Shih-chung stated this was because the test kit brand is a rapid PCR test. A less expensive 300 NT brand will also be imported.

According to New Taipei mayor Hou You-yi, the NPI for New Taipei is currently 85%. Hou stated that there are currently 155 high-risk boroughs in 15 areas, which has decreased by 44 boroughs. 122 boroughs that were medium-risk are now categorized low-risk. Likewise, 66% of cases currently being found are asymptomatic.

Taipei mayor Ko Wen-je states that he currently hopes to see cases halve every week, based on past patterns. Likewise, Ko suggested that he is already considering the issue of when level 3 will be lifted, though he does not see that as an issue until there are less than ten cases per day. Ko has been known to shift position on the issue of escalating or de-escalating the COVID-19 alert, though.

Though there have been reports that the COVID-19 strains found in Wanhua and New Taipei are different, the CECC asserted today that these were all the Alpha variant of COVID-19. The Miaoli clusters are also the Alpha variant.

As with past days, much of the CECC press conference today focused on the vaccination schedule. The CECC has praised local governments for being quick to conduct vaccinations, but does not view the current vaccination speed as fast enough, with 140,000 out of 1.24 million vaccines from Japan’s donation to Taiwan distributed so far.

The CECC is aiming to conduct one million vaccinations per week. In particular, the CECC states that there are backlogs with reporting vaccinations from city governments, resulting in some lag for statistics about vaccinations. Chen stated that he will consult with Audrey Tang, who is in charge of setting up the system for vaccine distribution for Taiwan, about setting up a vaccination map showing where vaccines are available. Namely, at least six people need to be vaccinated for a bottle to be opened, to avoid waste—even if medical personnel have been very efficient in vaccination to date.

The second wave of AstraZeneca will be sent out tomorrow, along with Moderna. 63,200 doses will be sent out to local governments. Vaccinations still focus on categories 1 to 3. Chen believes that vaccinations for category 1 have increased to around 80% from 73%, while category 2 is around 50% and category 3 is less than 50%, with the use of Moderna prioritizing medical personnel.

The CECC again stressed that airport workers are included in category 2 personnel, as well as that category 2 and 3 personnel are frontline workers in the fight against COVID-19. There have been some reports that psychologists are being left out of vaccination for medical personnel and being told that they are not part of the eligible categories.

The third case of a death in their 30s was reported today. Although this is thought to be due to underlying conditions, there is still concern about the death rate for COVID-19.

Arrangements are being made for individuals who have already received one dose of vaccine to receive their second dose.

11,000 vaccinations took place in Hsinchu this afternoon, bringing the total rate of vaccination for individuals over 80 to 63%.

Miaoli county magistrate Hsu Yao-chang of the KMT has been criticized by independent city councilor Zeng Wen-xue, a former member of the NPP, after Hsu called for elected officials to be included in the second vaccination category. Zeng, who has otherwise been highly critical of restrictions called for by Hsu on migrant workers, criticized Hsu for pushing for priority vaccinations for politicians at a time in which elites have come under scrutiny for defying the vaccine priority order.

Two individuals in their nineties have passed away in Taichung after being vaccinated for COVID-19. Though both had pre-existing conditions, their deaths are currently under investigation as to whether they were caused by the vaccination.

President Tsai Ing-wen took to livestream yesterday to urge the elderly to get vaccinated. Tsai also stated that the government was willing to work with private industry in vaccine acquisition efforts, likely hoping to be diplomatic regarding efforts by Terry Gou of FoxConn to purchase vaccines.

Negotiations with vaccine manufacturers continue. Taiwan is looking at purchasing a third dose for vaccinations to boost effectiveness, given the emergence of new variants.

Domestic vaccine manufacturer Medigen is slated to begin phase three trials in Medigen, having signed a Memorandum of Understanding with the National University of Asunción.

With Terry Gou still pursuing efforts to purchase BioNTech vaccines that he claims will be directly shipped to Taiwan from Germany, but still unable to secure an authorization letter proving that the vaccines he imports are genuine, Chen stated that there has not been progress on the authorization letter today. The CECC still requires this authorization letter but has not seen it yet. Similarly, Chen drove home the point several times today that vaccine manufacturers internationally have indicated that they primarily hope to sell to governments.