47 Domestic Cases Announced, Daily Cases Fall Below 50 for First Time in a Month

47 DOMESTIC CASES and three imported cases were reported at the Central Epidemic Command Center’s (CECC) daily press conference today. 21 of the new cases were found while already in quarantine, while 76.1% of all cases to date have been released from quarantine. 13 deaths were also announced, which is higher than in past days. 20 cases were in New Taipei and 18 cases were in Taipei. There were five cases in Taoyuan, two cases in Kaohsiung, and one case each in Hsinchu City and County.

The CECC stated that current trends show declining cases and that it is evaluating measures for July 12th, when the current level three alert is to last until. Minister of Health and Welfare Chen Shih-chung stated that if the Taipei Agricultural Products Marketing Corporation and Pingtung clusters are contained, smaller clusters may not be as dangerous. But preparation needs to be made to quickly contain new COVID-19 cases if they occur. Similarly, the Executive Yuan has stated that it is currently evaluating the COVID-19 alert level. There are no plans to prematurely lift the level three alert, which is set to last until July 12th, currently. 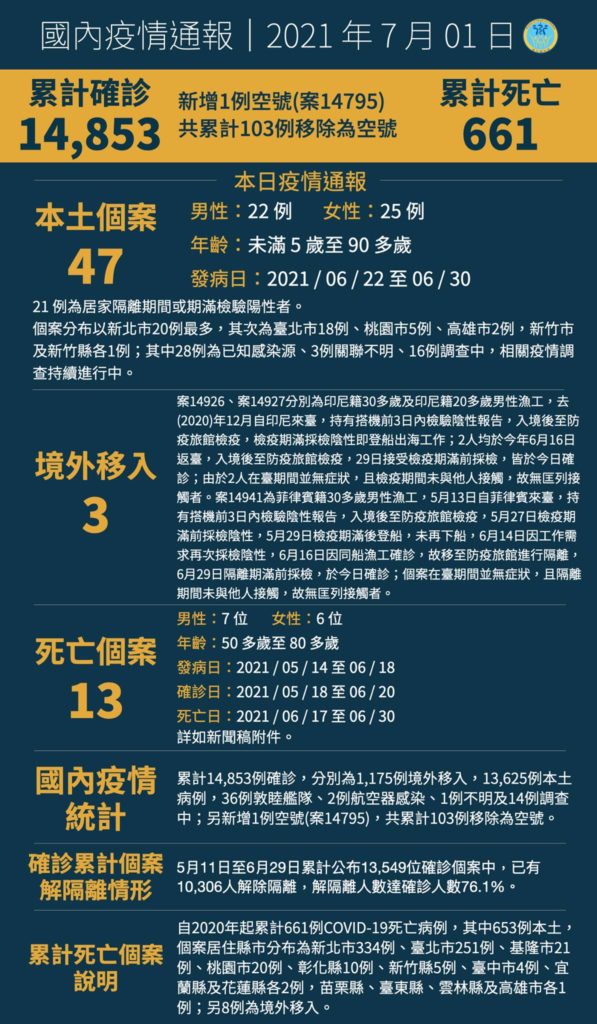 Though the CECC is considering allowing restaurants and night markets to restart regular services in some capacity, current measures regarding social distancing, contact tracing, and use of alcohol sanitizer are maintained. Regulations for night markets that reopen will be more similar to measures for fruit and vegetable markets.

There are no plans to relax quarantine protocols, though the airline industry has different measures because it is necessary for the stable functioning of the country, and the CECC is still focused on the current outbreak before coming up with ways to verify individuals have been vaccinated abroad. The CECC will need to coordinate with other government agencies regarding proof for vaccination outside of Taiwan.

Testing continues in Pingtung, due to the Delta variant cluster there. 8,283 have been tested in the surrounding neighborhoods to the case. Up to yesterday, all of those tested have been negative. 2,242 tests were conducted yesterday, with 1,683 negative results while 559 are still being processed.

461 individuals are in quarantine facilities in connection with the Fangliao Hospital, where one of the Pingtung cluster cases sought treatment. Of these cases, 320 tests are still being processed, with only one test positive, who is someone married to one of the existing cases.

Speculation continues to abound how residents of two floors of an apartment building in Fengshan, Kaohsiung became infected with COVID-19 despite the lack of any direct contact between them. Apart from fears of undetected transmission chains of COVID-19, there are fears that transmission could have through the building elevator.

Starting tomorrow, all inbound passengers will be PCR tested at Taoyuan International Airport, not just travelers from high-risk countries. This is a policy U-turn for the CECC, which originally stated that it did not intend to test passengers from all countries and only high-risk countries in order to reduce contacts that could lead to the spread of COVID-19. Nevertheless, the policy was criticized by mayors including Chen Chi-mai, Cheng Wen-tsan, Hou You-yi, who called for general testing. The Taoyuan International Airport only has ten testing rooms, so how to alleviate crowding may be an issue. Rapid testing will also occur between days 10 to 12 of the quarantine period.

The CECC stated that the policy shift took place because there were previously concerns about false negative testing results leading to a false sense of security for individuals in home quarantine. But as now inbound travelers are put in centralized quarantine facilities, this is less of an issue. Individuals with visible symptoms will be tested in the airport and health monitoring will take place, with an eye to avoid new strains of COVID-19 entering Taiwan.

While the Taoyuan International Airport has five testing stations, the CECC will increase capacity if needed. Testing plans are drawn up daily based on the list of inbound passengers, with peak travel occurring on Fridays, and between 200 and 1,000 individuals entering Taiwan per day. 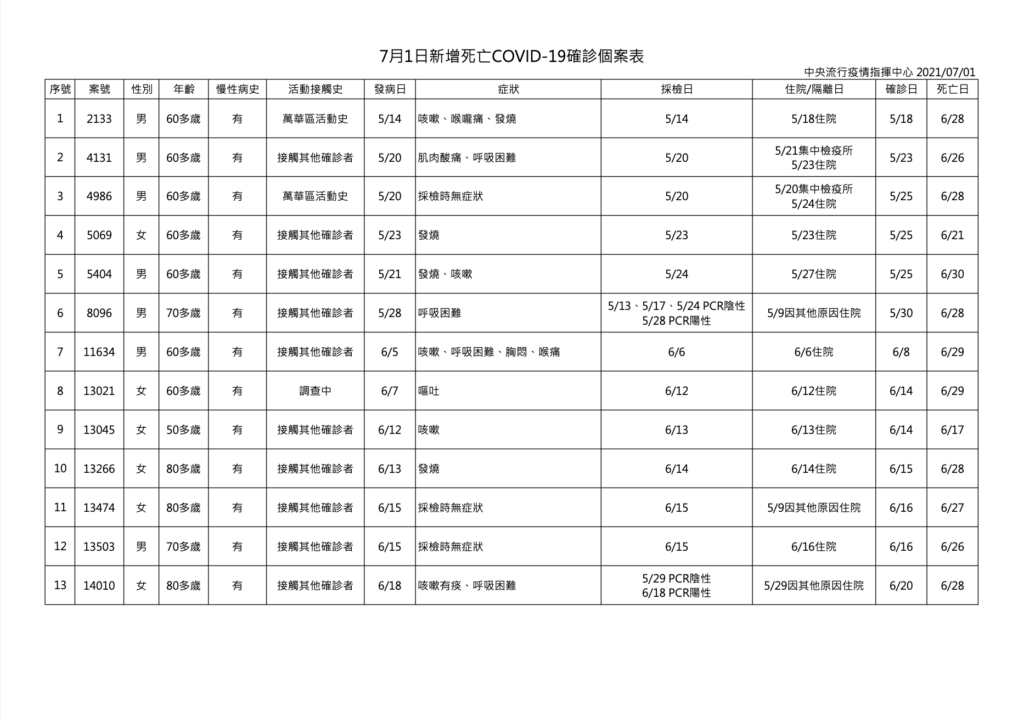 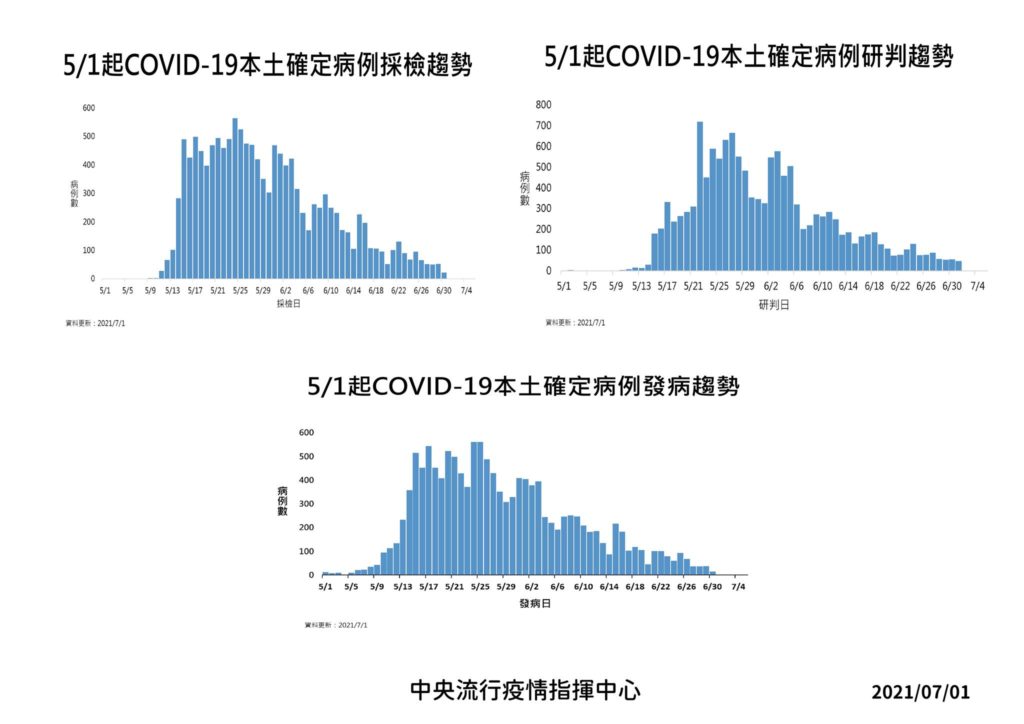 The CECC has also stated that it will begin to allow the mixing of vaccine doses. The CECC previously stated that there was not enough data to demonstrate the effectiveness of mixing vaccines, as well as that there were insufficient supplies and that side effects of vaccines were low in Taiwan.

With reports that Hsinchu is mandating tests for individuals in quarantine and making them pay for it themselves, the CECC will investigate the matter. The CECC has generally mandated that tests will be paid for by the government.

After a fire in a quarantine hotel in Changhua, the residents of the facility will be sent to other facilities. Contact tracing will be carried out for contact between firefighters and building residents, with testing to take place among firefighters.

The Ministry of Labor announces that migrant workers working in home-related categories will be allowed to resume transferring employers, something that was previously suspended under the auspices of preventing the spread of COVID-19. New employers will need to arrange PCR tests for migrant workers, which the employer needs to pay for, and employers that violate this will be fined 60,000 NT to 300,000 NT. Rolling adjustments may take place for migrant workers in factories in the future.

Although migrant worker advocates were previously critical of the Tsai administration for suspending employee transfers, the new measures may still be criticized. After all, Taiwanese workers do not have to be PCR tested before transferring employers and employers are still likely to try and pass costs onto migrant workers.

Taipei mayor Ko Wen-je has continued to come under scrutiny in connection to violations of vaccine priority order that took place at Taipei clinics. In particular, the city government was criticized by Taipei city councilor Lin Yin-meng because the government’s investigation report reportedly has been kept confidential by the Taipei city government, with city councilors only provided a five-page condensed version. To read the more detailed version, city councilors are only allowed to read within a designated room for 30 minutes and must leave if they have not finished, and they are not allowed to take photographs or take notes.

Second dose vaccinations are taking place. Some special cases have been carried out to vaccinate the foreign spouses of Taiwanese, with the cooperation of the Ministry of Foreign Affairs.

Chen Shih-chung thanked the US for its vaccine donation of 2.5 million vaccines today. Vaccines will begin to be distributed to widen vaccination categories, with a second wave planned for a target date of July 8th.

The Executive Yuan has announced that Tzu Chi’s vaccine purchase will follow the model set by TSMC and FoxConn. Tzu Chi handed in its application on June 23rd, with video conferences held between Tzu Chi leaders and government officials in late June. The religious organization has stated that it hopes President Tsai Ing-wen will agree to its efforts to purchase vaccines, while the government has thanked Tzu Chi for its efforts.

KMT city councilor Shu Cui-ling has filed a lawsuit against the government, claiming that it is unnecessarily restricting vaccine purchases and preventing non-government groups from filing lawsuits. 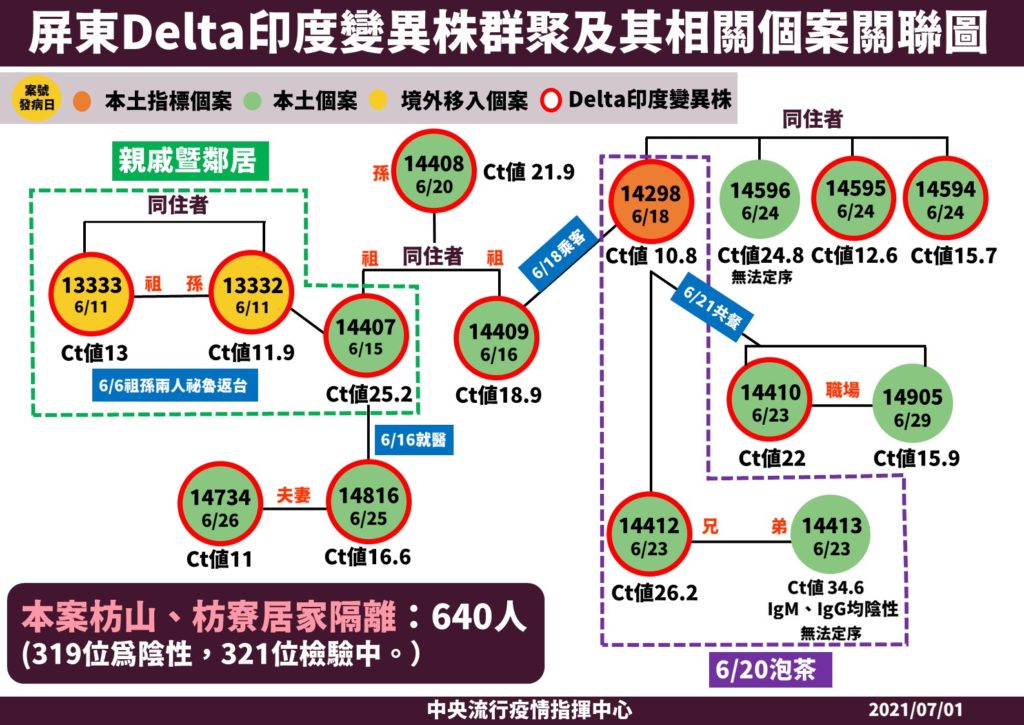 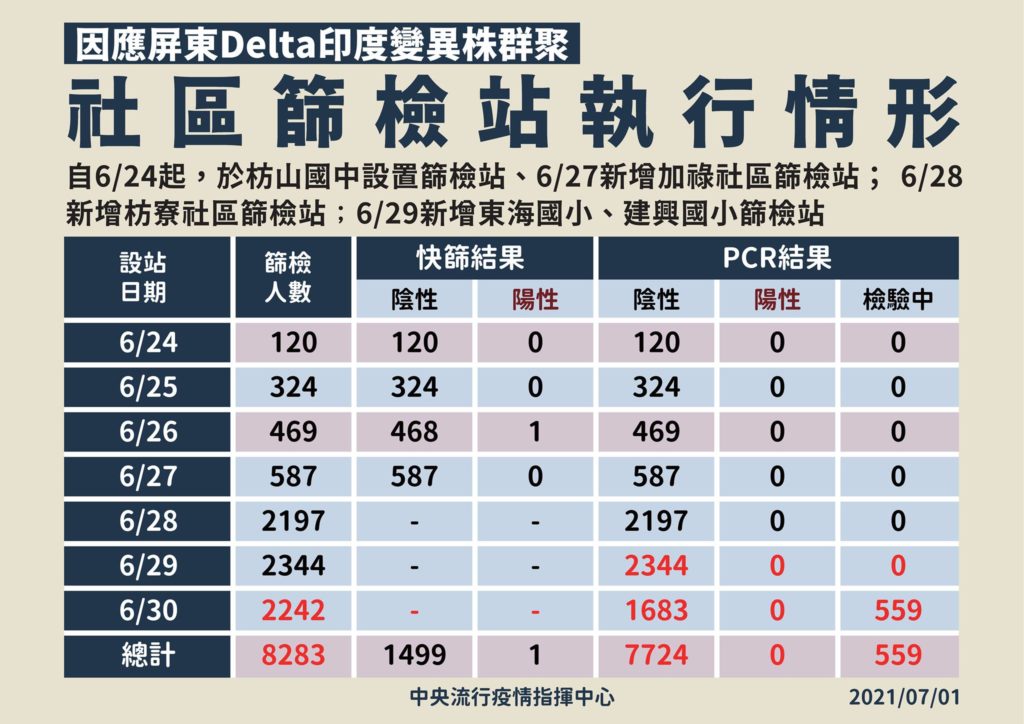 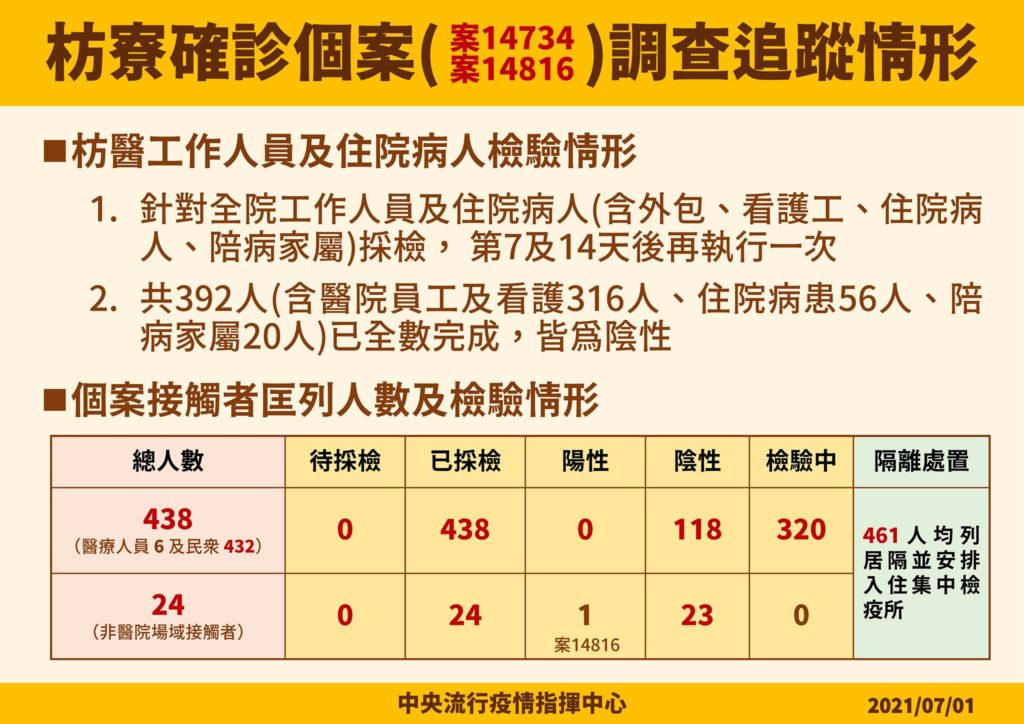 TSMC has denied comments by US Commerce Secretary Gina Raimondo that it had asked for assistance in obtaining vaccines for Taiwan. There were previously reports in international media in May that Raimondo had asked TSMC to supply more chips to US auto manufacturers.

Domestic vaccine manufacturer United Biomedical has applied for Emergency Use Authorization (EUA) of its vaccines. Phase two results for United Biomedical’s vaccines were announced on Sunday. The CECC declined to reveal details of domestically-manufactured vaccines under evaluation for EUA, though this will eventually be publicized.

Vaccinations continue to be low, with 36,151 vaccinated yesterday. Of these, 32,995 were AstraZeneca vaccines, while 3,156 vaccinations were Moderna vaccines. 2,043,218 individuals, or 8.5% of the population, have been vaccinated to date. While there were 48 adverse reactions yesterday, 12 were non-serious. There were 16 deaths after vaccination and 20 other reactions. 9 of those that died were above 75, seeing as more than two hundred individuals above 75 die per day and this overlaps with groups being vaccinated.