28 DOMESTIC CASES and three imported cases were announced at the Central Epidemic Command Center’s daily press conference today. 13 of these cases were already in quarantine.

15 cases were in Taipei, while there were five cases in New Taipei. There were three cases in Taoyuan, two cases in Miaoli, and one case each in Pingtung, Keelung, and Hsinchu. 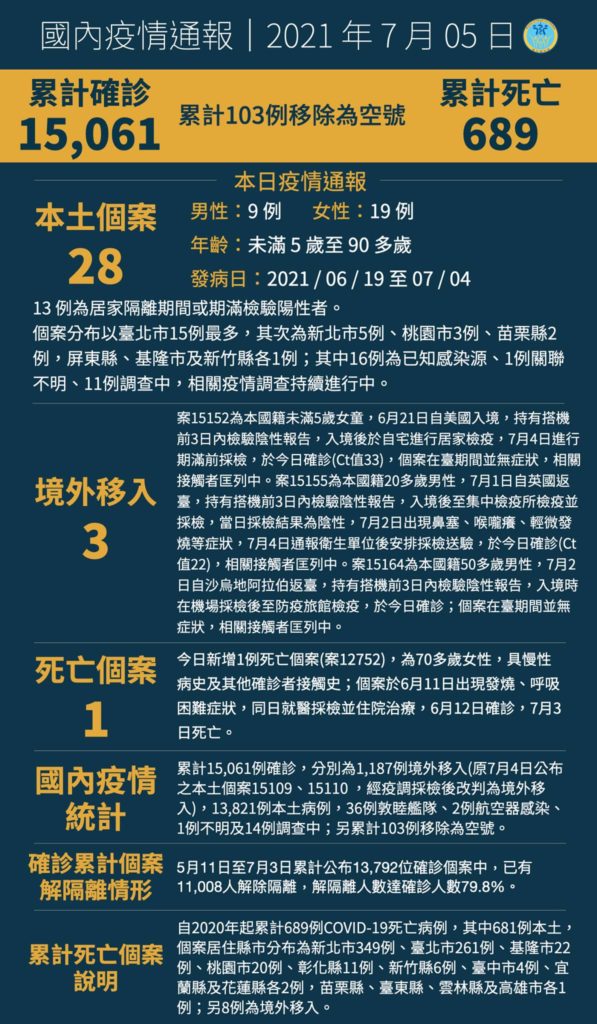 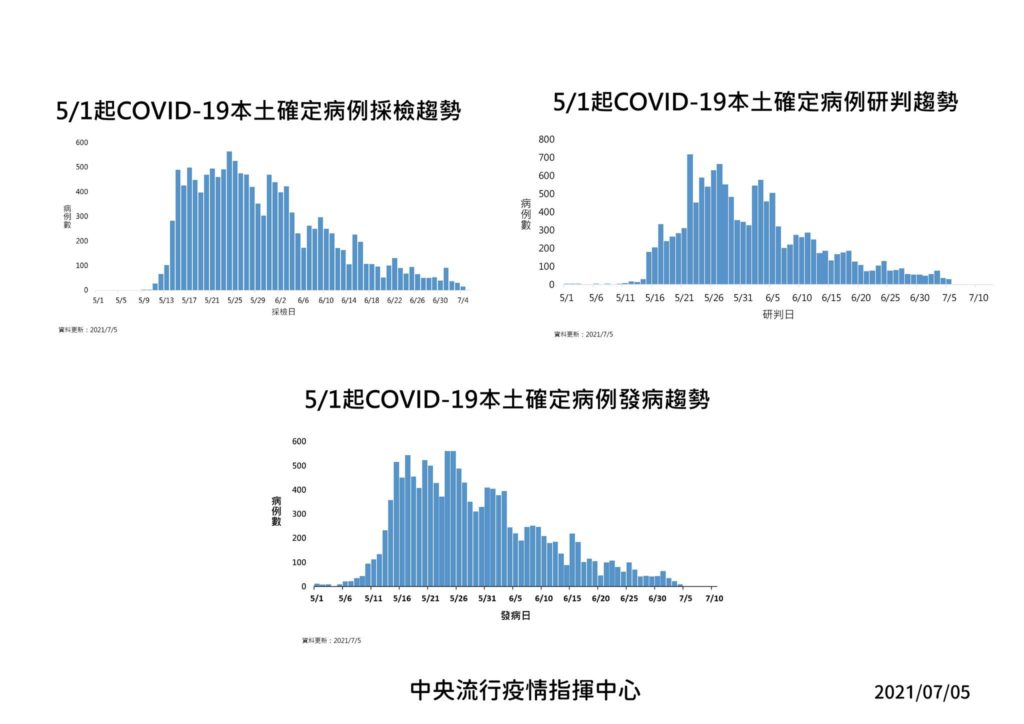 Information on the new cases announced today (left) and further data released by the CECC (right). Photo credit: Ministry of Health and Welfare/Facebook

Pingtung has seen calls for restricting taxis and other forms of public transport, due to the Delta variant cluster in Pingtung. In particular, there is concern that illegal taxis that are not registered with the government could prove a hole in epidemic prevention measures, with the Pingtung county government criticized for suspending inspections of illegally unregistered vehicles during the outbreak.

Businesses in Xinyi District have seen reduced crowds due to news of 30 COVID-19 cases among thirty households in the vicinity of Hulin Street that were found in past days. Over 4,395 have been tested in connection to the cases, with two positive cases found, though there are some reports of residents turned away from testing. With eight cases found in Zhongzheng District, testing will take place there next. The Shin Kong Mitsukoshi in Xinyi has been closed due to a COVID-19 case there.

The KMT has sought to criticize the Ministry of Health and Welfare, claiming that the Food and Drug Administration (FDA) has registered twice the number of people working in the FDA for priority vaccinations. There are 646 workers at the FDA, but the vaccine priority list specifies 1,261 individuals. This accusation appears to be the KMT’s way of striking back at the DPP over scandals that have resulted from pan-Blue politicians receiving vaccinations in violation of vaccine priority order.

The CECC responded to such accusations today, stating that this also includes personnel outside of the FDA, such as safety and quality control inspectors at airports.

Bus drivers are to be vaccinated between their large number of contacts. In response to claims of shifting vaccine categories, the CECC reiterated that category two personnel, consisting of workers in the fight against COVID-19, as announced on July 16th, were 46,000 individuals. 3,000 are workers for the central government, 4,100 are local personnel, and the rest are frontline workers, such as lizhang, lizhang aides, village chiefs, police, quarantine taxi drivers, etc. The CECC does not have authority over drawing up the vaccine priority list, which relevant agencies have authority to do.

20% of a wave of vaccine distribution of 643,020 doses that took place on July 1st was based on individuals from 65 to 74 in different parts of Taiwan. The distribution of 893,900 doses on July 5th also accounts for this age group and for high-risk areas. Reservations for the fifth round of vaccination distribution will begin tomorrow. 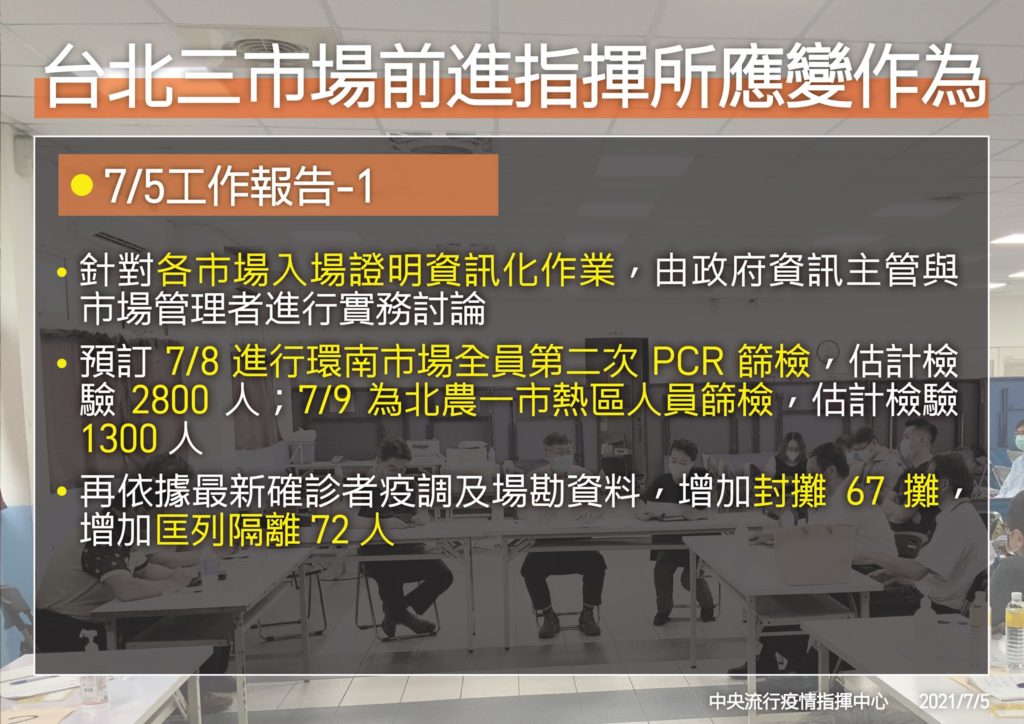 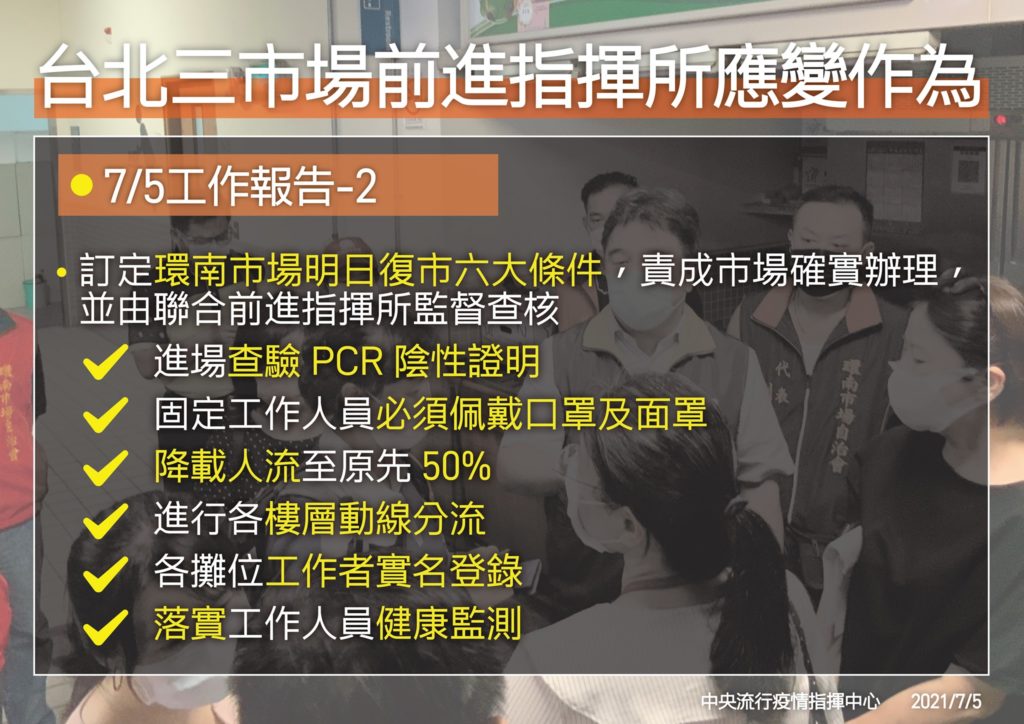 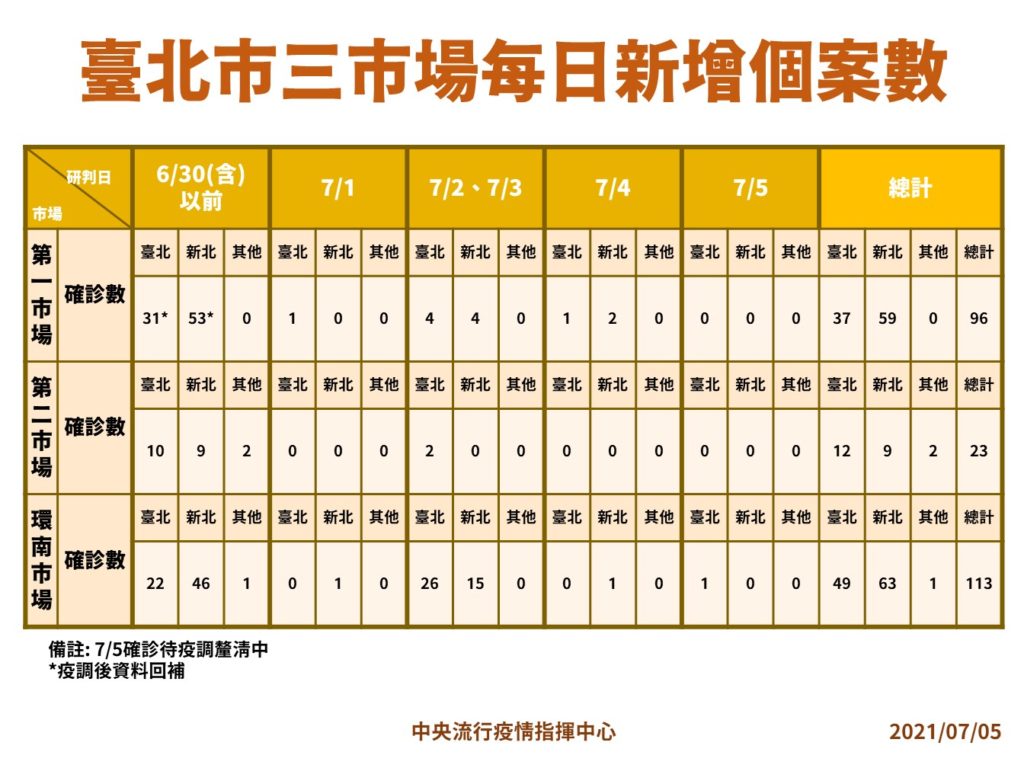 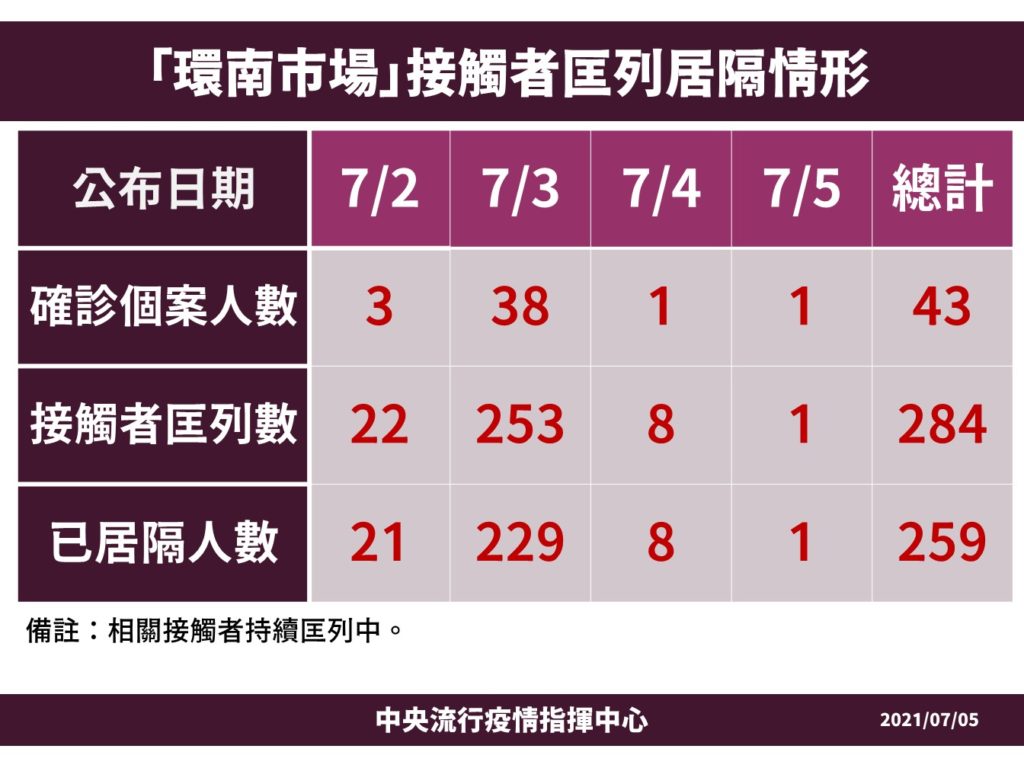 Over 10% of the population has now been vaccinated with their first dose of COVID-19. The CECC will publicize instructions on how to use the vaccination registration system set up by Audrey Tang tomorrow morning, though there is consideration of whether to use this system in Mazu, Lienchiang, and Kinmen due to the lower number of individuals that need to be vaccinated there. As new age groups are opened up for vaccination, the CECC will adjust based on willingness to vaccinate among different demographics. As most medical personnel are vaccinated, there are no plans to open up families of medical workers for vaccination currently.

The CECC responded to criticisms about delays reporting new cases and regarding reporting of deaths. Minister of Health and Welfare Chen Shih-chung denied claims by Taipei mayor Ko Wen-je yesterday that there were 52 positive PCR tests in Taipei yesterday that were not reflected in yesterday’s daily counts, stating that while there were delays reporting confirmed cases, it was not that slow. Chen suggested that this may have been conflated with the 41 cases at the Huannan Market. Chen otherwise stated that there might be several days delay in reporting deaths, with some hospitals slow to upload information about deaths or uploading partial information, and called on hospitals to improve the situation.

The CECC likewise stated that new clusters found in Taipei were, in some cases, old cases. When old cases are picked up by testing, they are deducted from the daily count. Chen nonetheless sought to drive home that local governments should set up test sites.

Taipei mayor Ko Wen-je has stated that he plans on testing public housing blocks when necessary by sending them to Taipei’s seven major hospitals and that individuals who believe they should be tested should do the same. He hopes to do this instead of setting up local test sites. It is unclear if this is a point of conflict between Taipei and the central government, with Taipei often claiming that it is hoping to avoid unnecessary expenses. Taipei also stated that it hopes for more vaccines to vaccinate MRT workers.

Ko otherwise defended Taipei Department of Health director Huang Shi-jie not coming to work while the investigation into violations of vaccine priority are underway in Taipei. When asked about Freddy Lim criticizing his vaccine response, but coming under scrutiny because of the claim that Lim does little for his constituency of Wanhua, Ko stated that he did not believe in political bullying and that Lim had helped him campaign in the past. Ko also asserted that he believed Taiwan would eventually need to accommodate the permanent presence of COVID-19 in some form, seeing as there was no way to keep Taiwan under lockdown.

According to New Taipei mayor Hou You-yi, three of the five cases announced for New Taipei today were already in quarantine. When asked about the possibility of lifting level three, Hou stated that he was worried about too many individuals going outside in past days and called on the central government to speed up the rate of vaccinations. Ko Wen-je stated that he still believes that cases will halve every week.

The CECC reviewed the overall development of the outbreak at the press conference today. From May 11th to July 4th, there 13,600 domestic cases, with individuals between fifty and sixty constituting around 20% of cases, an average age of 49. 90% of deaths are above 60, of which 90% have preexisting conditions.

The death rate is 2.0% for those below 60. It is 6.6% for individuals 60 to 70, while it is 15.3% for individuals between 70 to 79, and 34.6% for individuals above 80. The average age of death was 72, with high blood pressure and diabetes among the most common preexistent conditions that made death more likely. Deaths took from 0 to 20 days after the onset of symptoms, an average of seven days later, but there was a declining death rate as the outbreak went on and medical capacity stabilized, and the time of death became further apart from the onset of symptoms. 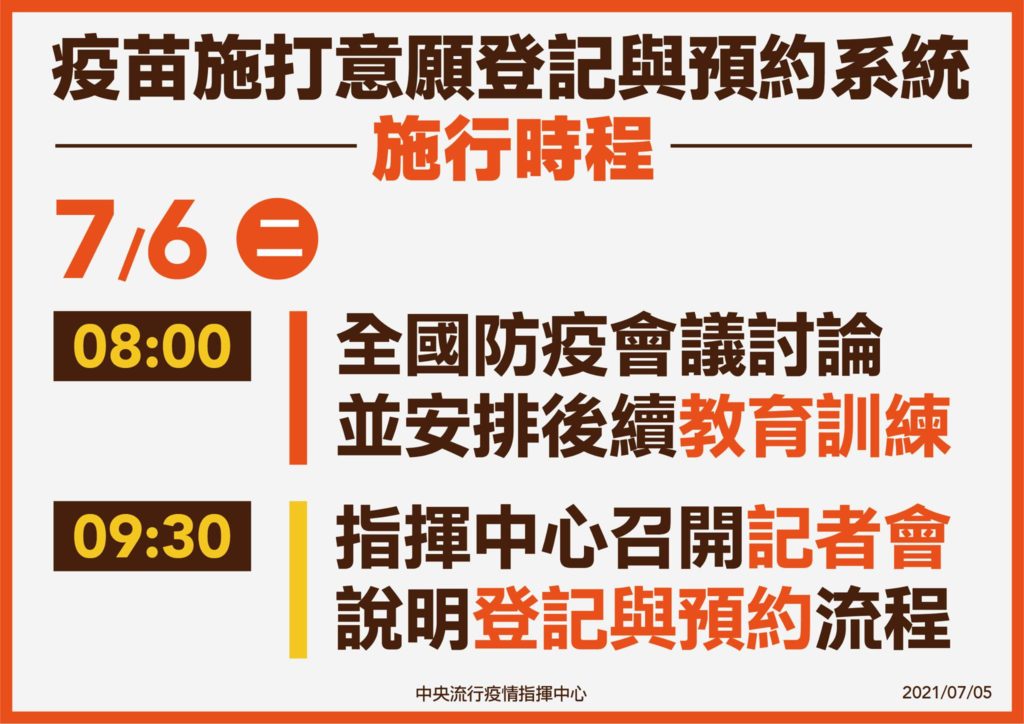 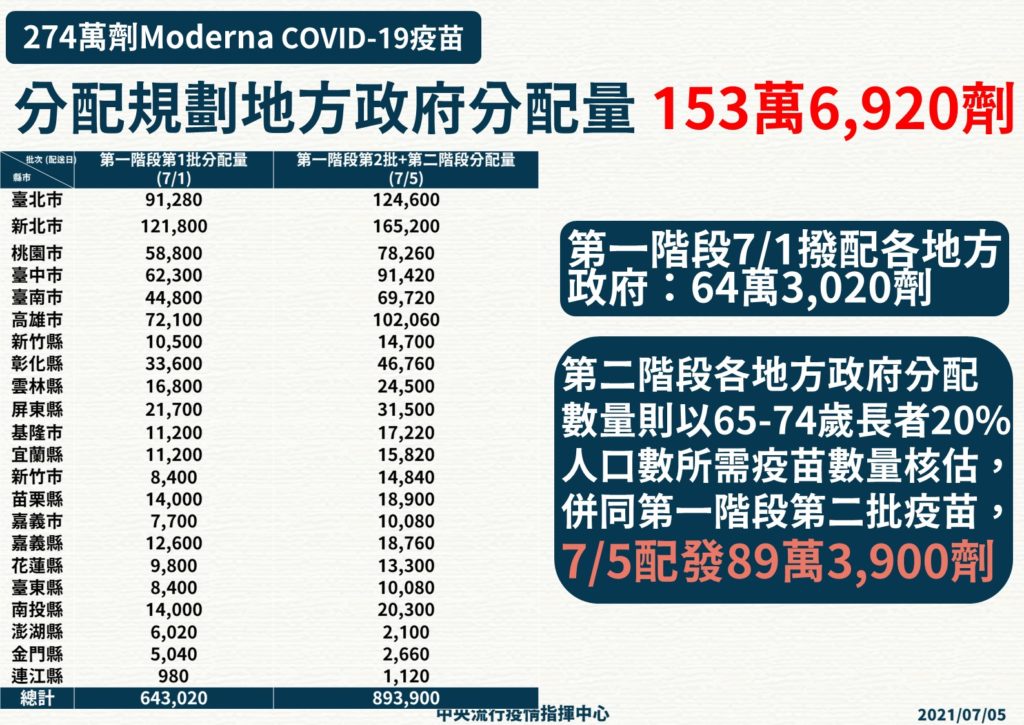 Information on tomorrow’s press conference to explain the new vaccination registration system set up by Audrey Tang (left) and information on the distribution of vaccines (right). Photo credit: Ministry of Health and Welfare/Facebook

According to the CECC, the use of antibody medication has been effective in curbing deaths. That being said, the CECC also stated that manufacturers have not applied for Emergency Use Authorization (EUA) in Taiwan and that before the recent increase in severity of the pandemic, the manufacturer of remdivisir withdrew its application for EUA to reserve capacity for more affected capacities.

The KMT met with the head of the Central Election Commission (CEC) today to exchange views on the delay of the referendum due to the ongoing COVID-19 outbreak. The KMT brought up the possibility of implementing legal measures to allow for absentee voting, but were told that this would be too late to implement this year.

According to DPP legislator Hsu Shu-hua, who publicized LINE screenshots showing this, the Huannan Market was originally scheduled to be closed for a week in light of the cluster of COVID-19 cases there. However, Taipei deputy mayor Huang Shan-shan shortened this to three days. Huang, a former PFP city councilor and member of the New Party, is considered to be a possible candidate of the TPP for Taipei mayor in 2022. When asked about this today, Huang stated that she believed Hsu should review whether such issues were due to her or the fault of the central government.

Taipei city councilor Lin Yin-meng has criticized the timeline of COVID-19 prevention measures that Taipei mayor Ko Wen-je gave during his daily press conference yesterday as inaccurate. Namely, Ko sought to defend his initial reluctance to use PCR tests, by claiming insufficient capacity to process PCR tests early on in the pandemic, but it was only recently that Ko made the decision to switch to primarily using PCR tests, due to increases in speed processing the tests.

During the CECC press conference, Chen Shih-chung stated that he did not criticize the Taipei city government’s response to the current outbreak as claimed by “a Taipei spokesperson,” but that he hoped for improved information sharing for greater analysis. He said that the spokesperson in question was welcome to call him. Chen was likely referring to Huang Shan-shan, who had stated that she was refusing to accept phone calls from Chen in the past.

Taipei mayor Ko Wen-je took to social media late last night to lash out against the media, claiming that the DPP was allowing fake news to circulate about Taipei city’s COVID-19 response. This followed up on comments by Ko yesterday atmosphere comparing criticisms of Taipei’s COVID-19 response from the media and from city councilors to the atmosphere before the rise of Hitler in pre-Nazi Germany. Ko has come under scrutiny for comments in a similar timeframe defending CtiTV, the Want Want Group-owned television network that went off-air last year due to regulatory measures from the National Communications Commission. Want Want Group-owned media outlets had been reported on by the Financial Times as accepting orders from China’s Taiwan Affairs Office and by the Apple Daily as accepting funds from the Chinese government, following which the Want Want Group tried to sue both Financial Times and Apple Daily. Ko has been criticized by Taipei city councilors including Sabrina Lim and Miao Poya after these comments.

Infographic by the CECC on reporting of statistics about deaths. Photo credit: Ministry of Health and Welfare/Facebook

Fujian, China has reported two more positive cases from Taiwan. CECC has requested more information, but 80% of cases reported by China were already known by CECC. It is possible that individuals who have recovered still test positive after travel to China.

Chen Shih-chung declined to comment on reports that Terry Gou will sign a contract for the import of BioNTech vaccines. Chen also neither confirmed nor denied reports that 220,000 or 580,000 AstraZeneca vaccine doses will arrive on Wednesday.