Continued Controversy In Hong Kong Over Oath Taking By Localists

CONTROVERSY OVER localist lawmakers-elect Yau Wai-Ching and Baggio Leung’s oath taking continues in Hong Kong, with attempts by the pro-Beijing camp to hinder their being sworn in through a walkout of LegCo and a last minute interim injunction by the Ministry of Justice aimed at preventing them from taking office. It remains to be seen as to whether Yau and Leung, both members of the localist party Youngspiration, will be allowed to enter LegCo.

Before this present controversy about legislators-elect being sworn in for office, it had previously been a question as to whether localists would be allowed to run in elections to begin with, with requirements to sign an oath of loyalty to China which could have prevented electoral candidates who had in the past openly advocated Hong Kong independence from running. Some candidates were not allowed to run altogether on the basis of past independence advocacy. With the eventual victory of localist candidates, this was seen as potentially a major development in Hong Kong politics, and it was questioned as to what effects the rise of Hong Kong independence as a political position would have on politics in Hong Kong writ large. But now the future participation of localists in legislature is up in the air. 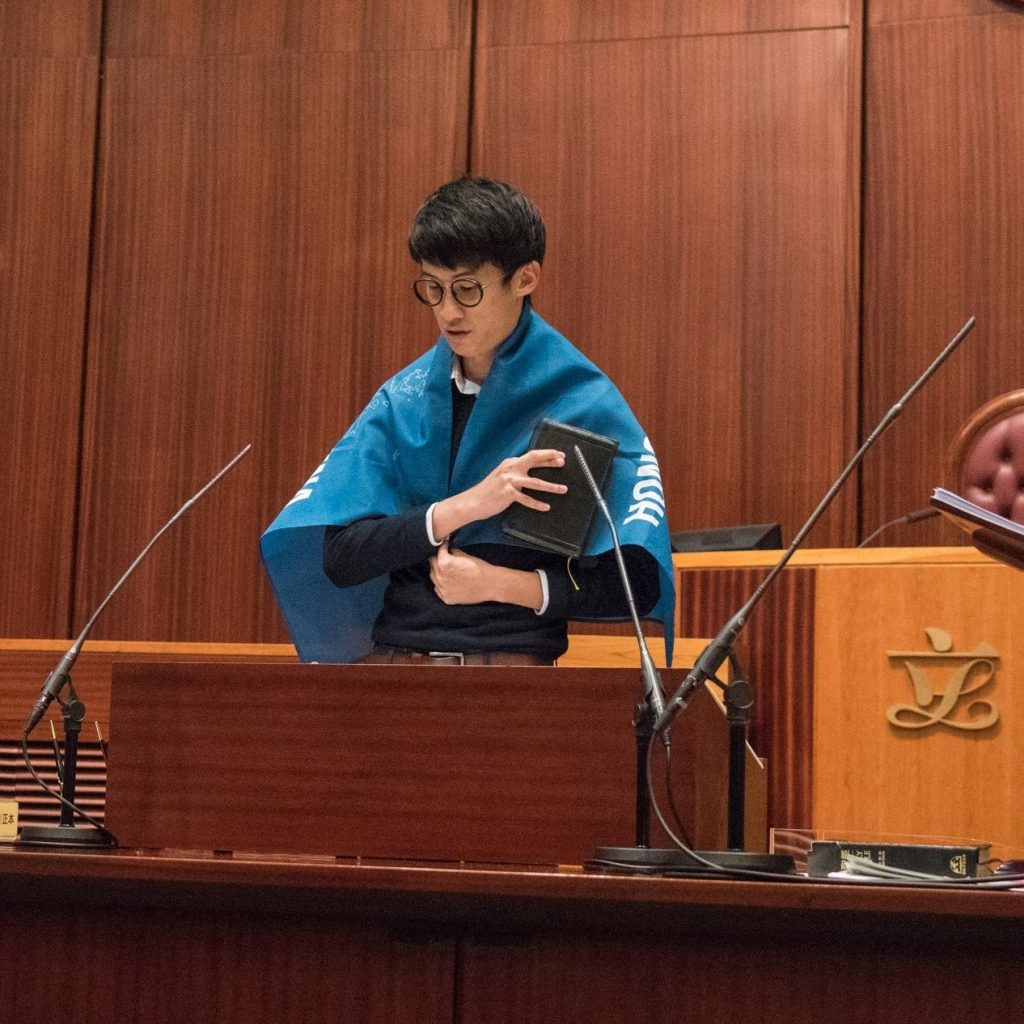 During their swearing in ceremony, Yau and Leung would use the ceremony as an opportunity for protest against China, with their swearing in oaths containing what have been perceived as insults to China. These oaths, however, were rejected as unacceptable, which is what has led to the current quandary regarding oath taking. While Yau and Leung were slated to retake their oaths, both have currently been unable to.

Yau and Leung are not the only candidates who used the swearing in ceremony for newly elected legislators as an opportunity for protest, nor would they be the only lawmakers who would be made to retake their oaths. Lau Siu Lai, who took ten minutes to read her oath as a gesture of protest despite the oath only being about eighty words long, was made to retake the oath. Likewise, Edward You Chung-Yim, the representative for the Architectural, Surveying, Planning and Landscape functional constituency, had his oath rejected for adding extra words promising to advocate “democracy” and for “sustainable development”. Pro-Beijing lawmaker, Wong Ting-Kwong also retook the oath, because he omitted one instance of the word “Hong Kong” from the oath, out of the phrase “People’s Republic of China Hong Kong Special Administrative Region” that occurs three times within the oath. Although this may have been a Freudian slip, as indicating Wong’s pro-Beijing priorities, this seems to have been a genuine mistake on Wong’s part.

Controversy Over Perceived Insults To China

YAU AND LEUNG had drawn controversy because of their use of the term “Shina” to refer to China and Yau referring to the “People’s Re-fucking of Shina”. Reference to “Shina” has been interpreted as possibly referring to a Japanese colonial slur against China, though some reports also state that “Shina” may be a pronunciation of “mental retardation” in Cantonese. While what Yau and Leung intended to say exactly is unknown, it strikes as slightly strange for what may have just been attempts to curse off China to suddenly reference a mostly forgotten term used to refer to China by Japanese from the early 20th century, despite somewhat misleading claims which circulate in English language media that this is a common racial slur against Chinese.

Historically, “Shina” (支那) was a term to refer to the country of China used by the Japanese during the Japanese colonial period, whereas it was the related term of “Shinajin” that was a derogatory term used to refer to the Chinese people (支那人). It was a debated topic in Japan during the 1930s as to whether usage of the terms “Shina” and “Shinajin” constituted an insult against China and Chinese people. Republican era Chinese intellectuals themselves had mixed verdicts as to whether “Shina” and “Shinajin” were racially insulting. But this may be to read too deeply into the matter. Whether racially tinged or not, what Yau and Leung said was probably meant as an insult in some form. 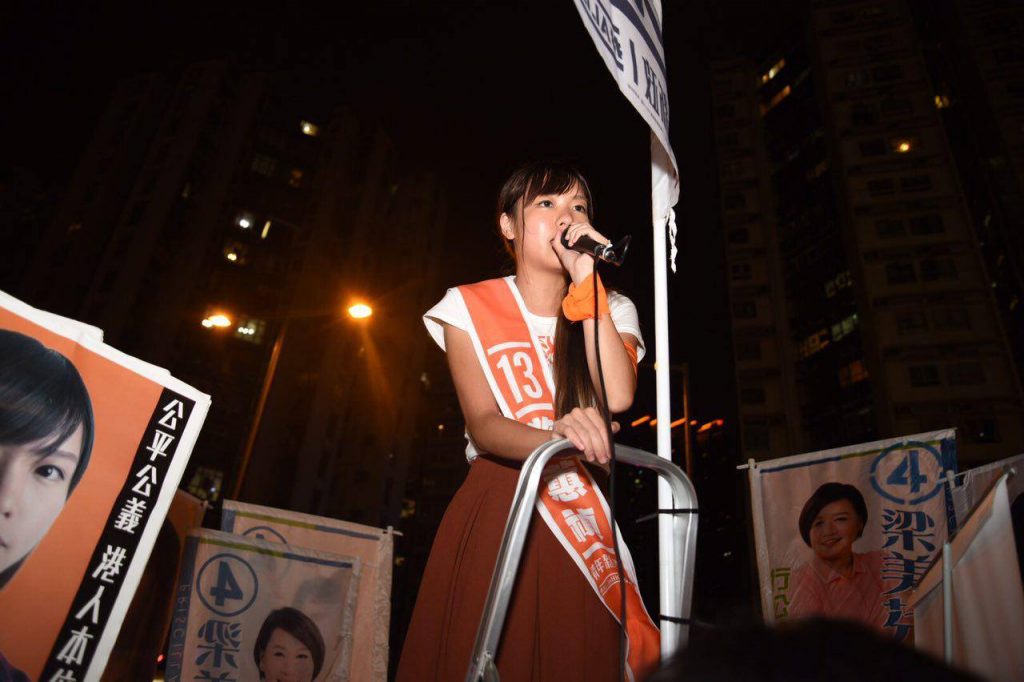 Yau and Leung are not the only candidates to strangely refer to China during their oaths. For example, Nathan Law of Demosistō deliberately using the wrong tones to refer to China during his path. The vulgarity used in Yau and Leung’s oaths is what has led to controversy, as related to their status as the only localist candidates elected to LegCo. Leung has claimed that his pronunciation of China was a product of his “Ap Lei Chau accent,” but such an explanation is unconvincing, and this explanation has failed to placate the outraged.

The pro-Beijing camp has, unsurprisingly, seized upon the incident to assert the unsuitability of Yau and Leung for LegCo, with claims that the use of “Shina” unambiguously constitutes a racial slur against Chinese and that Yau and Leung should not be allowed to take office as legislators. Sometimes such claims have been on the basis of their use of vulgarity in their legislative oath taking. The claim would be that this demonstrates that, as young political candidates, they are childish, and not suited for the adult complexities of political office. Yau, for example, had previously drawn controversy for comments stating that Hong Kong young people had “nowhere to bang” because Hong Kong apartments are too small, with some outraged by what they saw as her use of vulgarity in public comments. Other times, this has been on the basis of claims that their actions have violated the sacred ties that bind between Hong Kong and China and “hurt the feelings” of the Chinese people. Some pro-Beijing lawmakers urge that Yau and Leung be prosecuted for their pro-independence views, with claims that this violates the law for advocating “separatism”.

Indeed, there is definitely some truth to the ethnic bias of Hong Kong localists against Chinese, with Hong Kong Indigenous and Youngspiration advocating the deportation of twelve-year-old Chinese immigrant Siu Yau-wai in 2012, who has spent most of his life in Hong Kong and who, as an orphan, has a legal status some have compared to that of a stateless person. But the ethnic views of localists are sometimes opaque, seeing as while they are often accused of being ethno-nationalism and they have demonstrated against Chinese immigrants as Siu, when pressed on the matter, localists have sometimes resorted to claims that their incipient Hong Kong nationalism is a civic nationalism, not an ethnic nationalism. Key localist leader Edward Leung, the spokesman of Hong Kong Indigenous, was himself was a Chinese immigrant at an early age. This probably reflects that localism may be much more of an inchoate or self-contradictory political phenomenon than would appear in much media coverage to date and that it contains a number of political strands.

Political Theater On All Sides?

MUCH OF THIS has the appearance of political theater. It has generally been a question as to whether localists in LegCo would participate in politics seriously or treat their membership of LegCo as an occasion for public stunts, with little political substance. This has been a question many asked in the lead-up to past LegCo elections. Criticisms of Yau and Leung which claim their unsuitability for office because they have offended the sanctity of political institutions sometimes sound more like claims about bourgeois morality than anything else, but Yau and Leung’s comments may just be reflective of childish vulgarity lacking substance, without too much to read into politically. 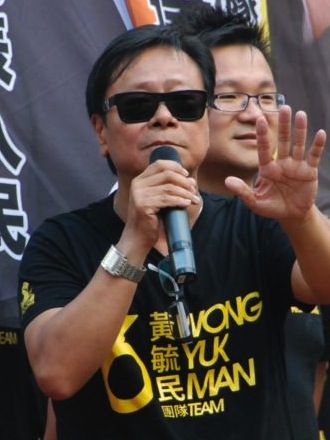 But even some of those who found localists’ actions distasteful would be outraged by the actions of the Hong Kong government in seeking to prevent them from taking office through a last-minute judicial review. There is the precedent of former legislator Raymond Wong Yuk-man, who lost to Yau Wai-Ching in past elections, being allowed to take his oath again after a 2012 incident in which he coughed his way through the oath, omitting crucial words regarding the relationship of Hong Kong and China the first time he took his oath. As such, it was expected that Yau and Leung would be allowed to retake their oaths.

In fact, it seemed a greater mystery as to whether Yau and Leung would, in fact, go through with a second oath taking to actually become legislators, with some tarrying on the matter by Yau and Leung because they did not immediately filing a request for a second oath taking. This returned to questions about their political seriousness. But the filing of the a last-minute request for an injunction against Yau and Leung by the Hong Kong Department of Justice would provoke shock and outrage, with the views that this represented the Hong Kong government seeking to prevent democratically elected representatives from taking office. Secretary for Justice Rimsky Yuen Kwok-kung has denied that this was ordered by Beijing, this move coming from him and Hong Kong Chief Executive CY Leung. This move may reflect internal contestation among the pro-Beijing camp, with Leung and Yuen seeking to override LegCo president Andrew Leung. Leung, despite also being a despised pro-Beijing figure, argued that his constitutional responsibility was to allow Yau and Leung to take office. While the injunction was not granted by the Hong Kong High Court, permission for a judicial review was granted, with this slated to occur on November 3rd. 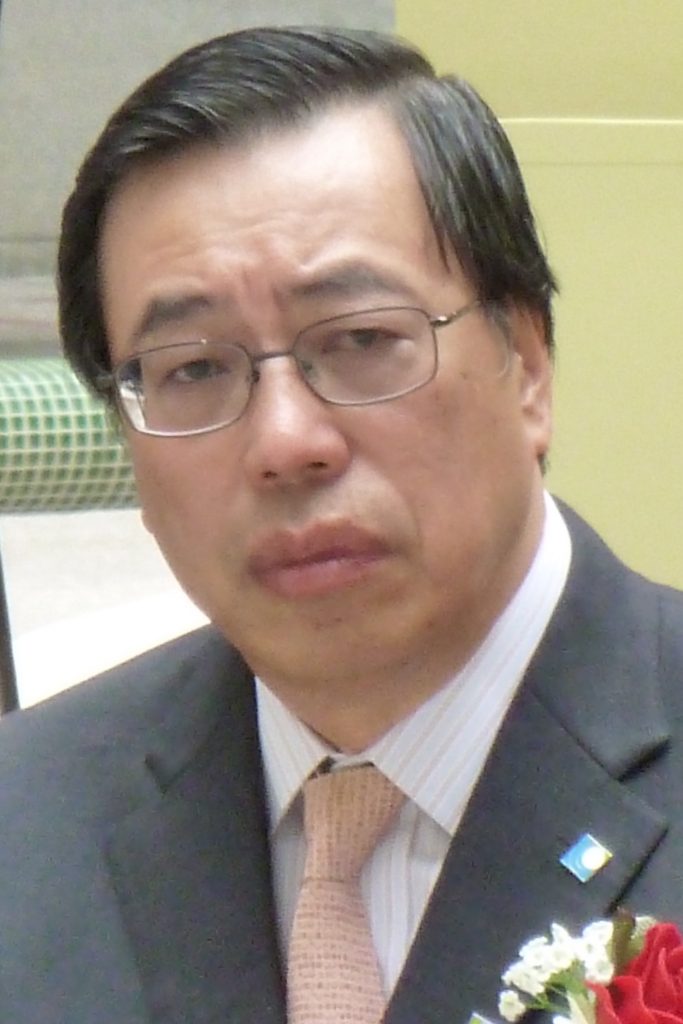