Agnes Chow Disqualified From Running For LegCo, But What Now?

AGNES CHOW of Demosisto has been barred from running in a by-election for Hong Kong’s Legislative Council (LegCo) on the basis of that her party advocates “self-determination” for Hong Kong. Chow was running to fill the seat left vacant by Nathan Law, also a member of Demosisto, after he was disqualified from LegCo on the basis of an oathtaking row. This occurred despite Law having served several months in office at that point.

Law was disqualified on the basis of how he took his oath, by using the oath as an occasion for protest against Beijing—something which had political precedents during past oath-taking ceremonies by legislators. And so, the oathtaking row was likely a pretext for Beijing to disqualify Law, alongside other politically dissident legislators. On the other hand, Chow’s disqualification comes from a press release stating that candidates who support self-determination for Hong Kong would not be allowed to run in upcoming LegCo elections, although this did not refer to Chow by name. 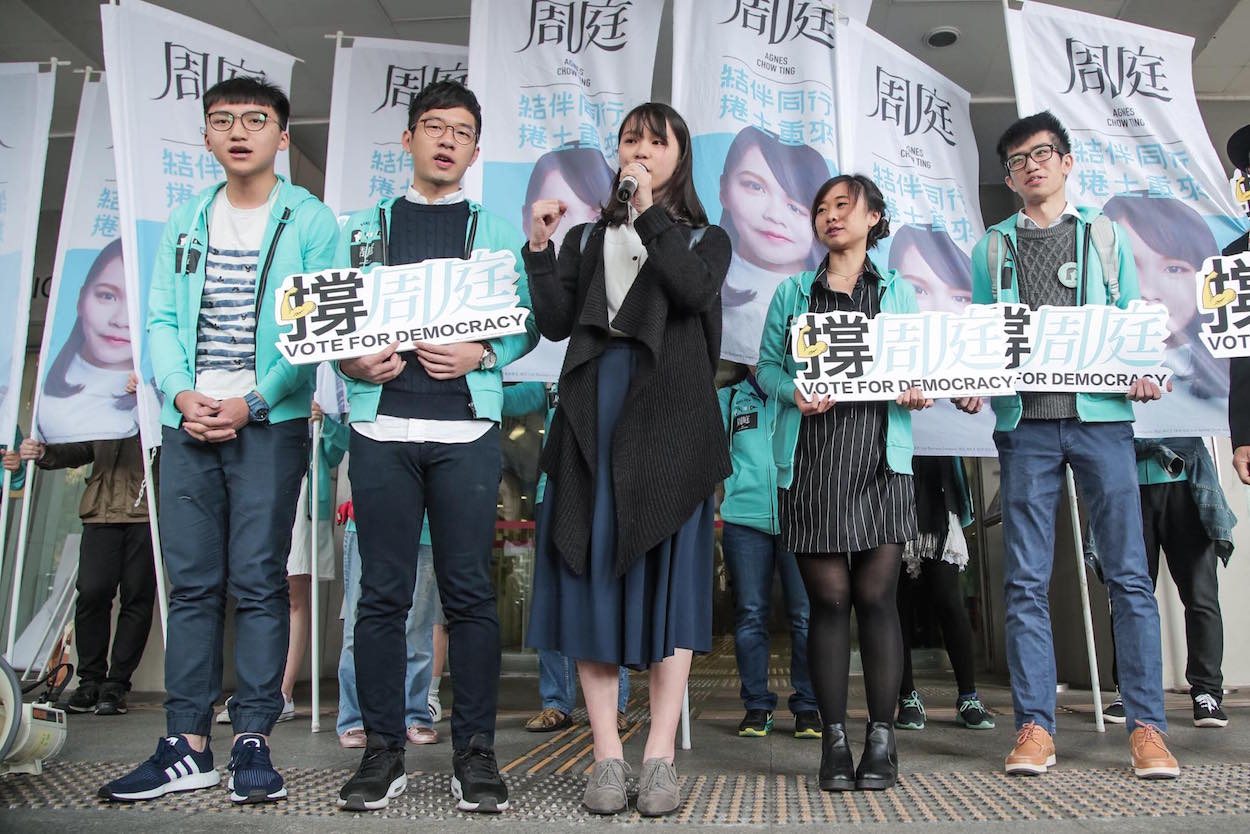 Law, alongside veteran legislator “Long Hair” Leung Kwok-hung and Lau Siu-lai, was disqualified after serving in office for several months, following Baggio Leung and Yau Wai Ching of Youngspiration being disqualified almost immediately after their oath-taking ceremony. But apart from disqualification for victorious legislators, there was already the precedent of localist Edward Leung of Hong Kong Indigenous being blocked from running in elections ahead of time. It is not surprising that Chow has been disqualified, too, then.

However, Demosisto differs from localist groups, such as Hong Kong Indigenous or Youngspiration, because it still only advocates self-determination for Hong Kong, rather than a platform calling for outright Hong Kong independence. Perhaps Demosisto thought that it was possible that Beijing would not block its candidates on that basis. Or that, even if the party expected being prevented from running, perhaps the party thought that it could still raise greater awareness of Hong Kong’s political situation through Chow being blocked.

Au Nok-hin, one of the organizers of the annual pro-democracy march, is expected to replace Chow as candidate of the pro-democratic camp. It remains to be seen as to whether he will also be blocked. In the meantime, Demosisto still intends to protest the issue, calling on supporters to defend Chow and protect “Plan A.” Protests today against the disqualification drew several thousand. But although Demosisto stated that it has a “Plan B” in case of Chow being prevented from running, it remains to be seen what that is. If it simply if continually replacing candidates and having them blocked or disqualified, this may lead to criticisms against the party for a lack of political imagination in thinking of alternatives.

As a result of Beijing viewing all of these different political positions in the same light and preventing them for running for office, it is possible that political differences between localist groups calling for Hong Kong independence and more mainstream groups which still emphasize some form of “self-determination” will be reduced. Advocates of self-determination such as Joshua Wong and Nathan Law and advocates of independence such as Edward Leung have been arrested for past protest actions in the past month, seeing no different treatment by authorities. And so the difference between the two camps may then become one of those who call for more radical forms of political action and those who remain more politically moderate. Yet after its candidates were disqualified and with the growing use of political violence in Hong Kong against critics of China, the fortunes of the localist camp seem to be on the decline, with the localist camp also sometimes being seen as all talk and unable to backup talk with effective action.

In this way, the future of protest against Chinese political encroachment in Beijing remains to be seen. Certainly, electoral routes of protest seemed blocked, but direct street protests will result in long-term arrest.

What now for Hong Kong? That remains to be seen. New alternatives have yet to present themselves, but Hong Kong activists will need to think on their feet, and figure out how to mobilize the masses of Hong Kong to action if they are to have any hope of resisting Beijing. Yet all the same, sometimes ennui can rapidly turn to anger unexpectedly in Hong Kong, as observed in the eruption of the Umbrella Movement in 2014 during a period in which it was thought that Hong Kongers were simply too indifferent to protest Beijing’s actions. It will also have to be seen if this will be the case.