The End of Democracy in Hong Kong?

The Banning Of Pro-Independence Candidates From Legislative Elections

WITH THE RECENT barring of candidates for legislature in Hong Kong on the basis of pro-independence views, does this mean that any remaining semblance of democracy in Hong Kong is dead? Namely, this would mark the first time political candidates in Hong Kong have been barred from elections to Hong Kong’s legislature, LegCo, on the basis of their political beliefs. Perhaps it need not even be said at this point, but this would be another nail in the coffin of “One Country, Two Systems,” with Beijing infringing upon Hong Kong’s political freedoms after its return to Chinese control despite promises to maintain the current system of government more autonomous than that of China until 2047.

The first political candidate to be banned from running from elections would be Andy Chan Ho-tin of pro-independence Hong Kong National Party, which occurred on July 30th. But in the past day, five other localist, pro-independence candidates would also be banned. These include Edward Leung Tin-kei of Hong Kong Indigenous, district councillor James Chan Kwok-keung, Nakade Hitsujiko of Nationalist Hong Kong, Alice Lai Yee-man of the Conservative Party, Yeung Ke-cheong of the Democratic Progressive Party of Hong Kong. 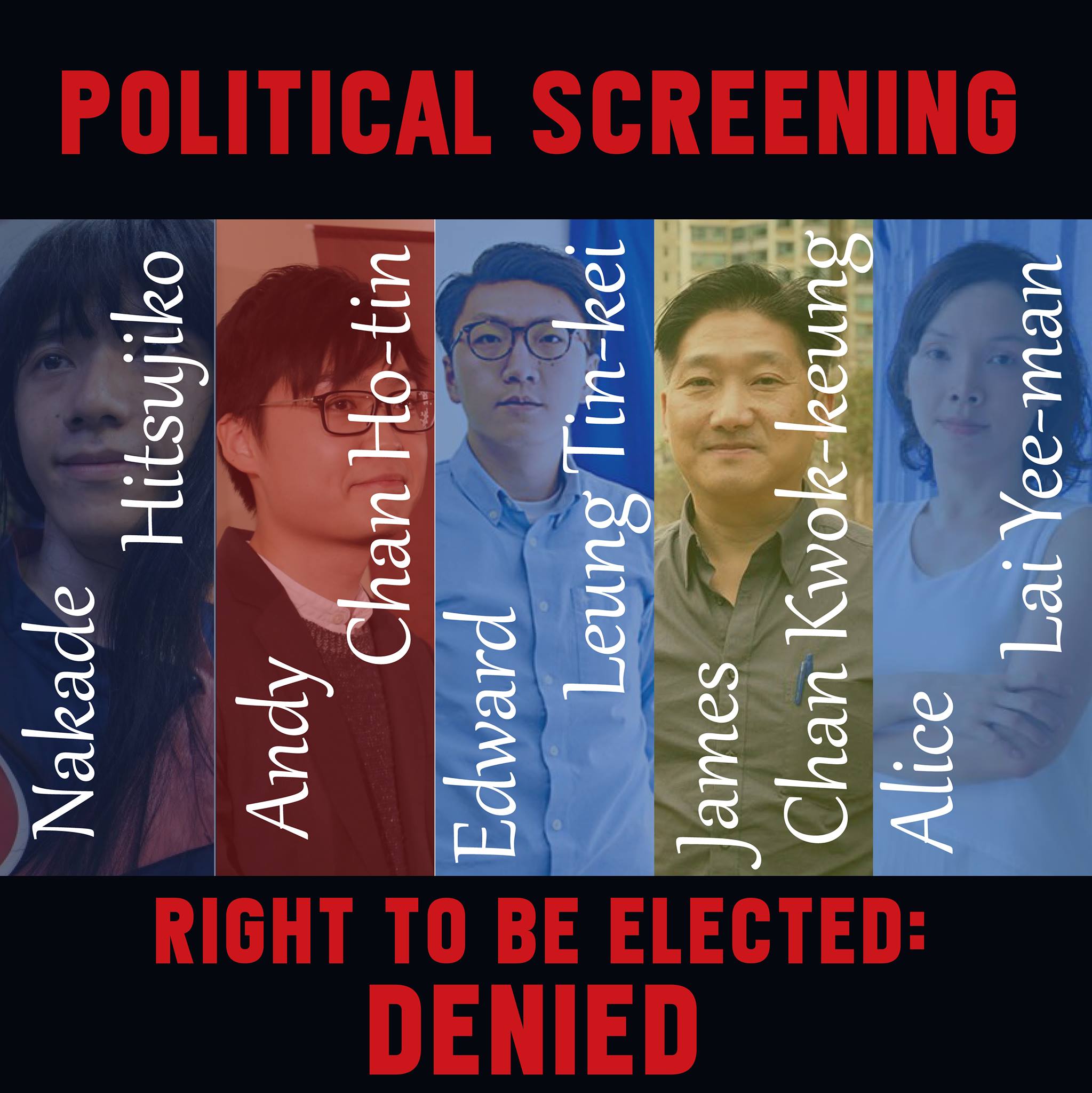 Image released as part of a statement condemning the banning of LegCo candidates by the Student Union of The Chinese University of Hong Kong. Photo credit: 中大學生會 CUSU

Several of the localist candidates that were planning on running were quite young, Andy Chan Ho-tin being 26 and Edward Leung Tin-kei being 25. Such individuals have drawn comparisons between the wave of young localist candidates running for legislature in Hong Kong to Taiwan’s “Third Force”, as a wave of young people running for political office after the eruption of a social movement as the Umbrella Movement, Fishball Revolution, or Sunflower Movement. During past district councilor elections, post-Umbrella movement youth activists running for office was dubbed “Umbrella Soldiers”, with some being successful in gaining office. Likewise, during a past attempt to run for LegCo during a by-election in the New Territories East, Leung won 15% of the popular vote, illustrating that it was possible for a localist candidate to garner a significant portion of the vote despite localism having been an marginal political position before the Umbrella Movement.

With the banning of localist, pro-independence candidates because of their political views, this would mark a significant milestone in the further deterioration of democracy in Hong Kong. Even if the Hong Kong government was ultimately subordinate to Beijing, at least free elections for political office were allowed, when this does not happen in China. But now political candidates are to be vetted by the central government for their political views before being allowed to run.

This suggests that any democracy which continues to exist in Hong Kong will continue to be encroached upon by the actions of the CCP through its intermediaries in the Hong Kong central government, with vetting of political candidates. This also poses the future possibility that elections in the future will merely become for show—with only pre-approved candidates being allowed to run.

Notably, after the banning of Andy Chan Ho-tin from running for election, localist firebrands as Edward Leung Tin-kei did in fact appear to try and downplay their pro-independence stances for fear of being barred from elections. The banning of Andy Chan Ho-tin also came after some anxiety from the introduction of loyalty oaths to China and against pro-independence sentiment which had to be signed for legislative candidates, as part of defending Hong Kong’s Basic Law, with some localist and pan-democratic legislative candidates questioning the whether candidacy could be disqualified if loyalty oaths were instituted, and some trying to run despite not signing a loyalty oath. Leung signed the oath and claimed publicly that his political stance had shifted away from a pro-independence view. But Leung was accused of being insincere in his actions by pro-Beijing politicians and Electoral Affairs Commission officials. Likewise, Nakade Hitsujiko attempted to finagle his way out of being accused of fomenting independence sentiment through obfuscating his political views, but this was not successful.

Thus, the banning of localist, pro-independence candidates has provoked not only outrage, but worry among the localist and pan-democratic camps. Among the angry reactions would include spontaneous protests after the banning of Andy Chan Ho-tin and Edward Leung Tin-kei, with large numbers of police being mobilized in response to localist groups declaring press conferences in response to banned candidates. There would also be a particularly memorable incident in which Edward Leung Tin-kei managed to get inside a LegCo briefing in order to curse off Electoral Affairs Commission chairman Barnabus Fung face-to-face, Fung having had a large part in the banning of pro-independence candidates through the introduction of the new loyalty oath. The same briefing would also see a confrontation between well-known pro-Beijing politician Leticia Lee and Cheng Kam-Mun, founder of the “Student Front” organization which attempted to keep the Umbrella movement going after the withdrawal of Scholarism and Occupy Central and currently a presenter on localist group Civic Passion’s media platform Passion Times—as well as Nathan Law of Demosistō also injuring himself during the ensuing scuffle as he was being removed by security.

Notably, following the banning of localist, pro-independence candidates, post-Umbrella political parties formed by young people often at odds with more extreme localist groups, such as Joshua Wong’s Demosistō have rallied in support of banned localist candidates, despite localist groups and Wong’s camp having traded harsh words at other times in the past. Demosistō has not in the past called for Hong Kong independence, but only for Hong Kong self-determination. It remains to be seen whether groups calling for self-determination but not necessarily independence will also have candidates banned. The ability of members of Demosistō as Nathan Law to run for legislature in upcoming elections had already been threatened by possible jail time to charges of unlawful assembly against Law, Wong, and others dating back to the Umbrella Movement, with Law being unable to run if his jail term exceeds three months. In addition, Election Affairs Commission officials would find the language used on campaign advertising by Law to be problematic. 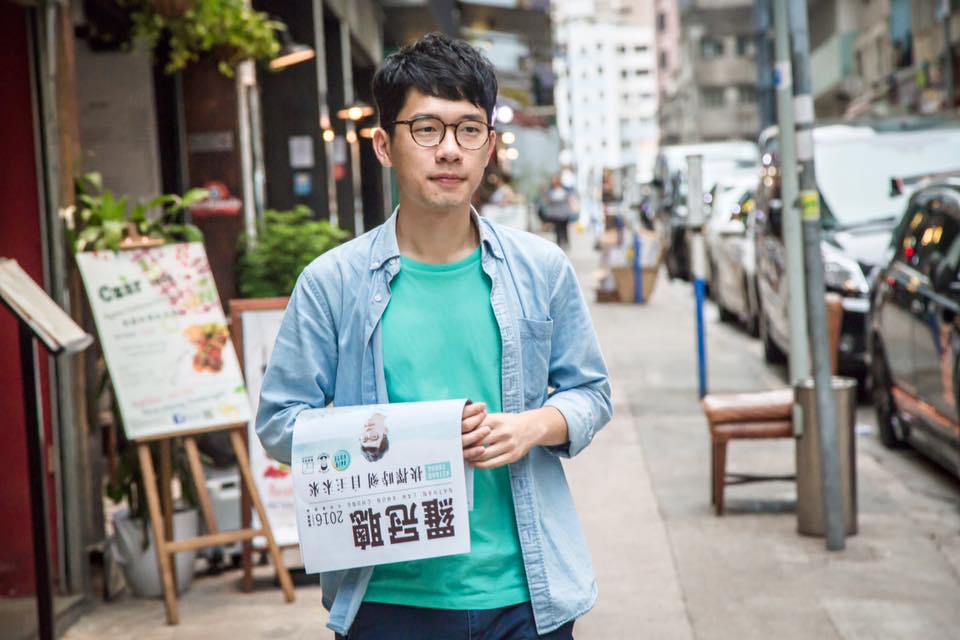 However, the political mainstream in general, inclusive of the older and longer established political actors of pan-Democratic camp, is probably quite anxious at present about what the banning of legislative candidates will mean for them in the future. This is even when such political actors do not explicitly advocate independence themselves, but only for some greater autonomy for Hong Kong from Beijing. There is much murky territory regarding which political stances will get legislative candidates banned for running for office, whether pan-Democratic or localist. If Andy Chan Ho-tin and Edward Leung Tin-kei are relatively high profile figures in Hong Kong who might expect to get banned from running for election, for example, candidates advocating for referendum to amend the basic law from an alliance between localist group Civic Passion, Proletariat Political Institute and the Hong Kong Resurgence Order had their candidacies approved by the Election Affairs Commission. Edward Leung Tin-kei and Hong Kong Indigenous have subsequently thrown their support behind three Youngspiration candidates, with Leung designated as leading election strategy for them, and one them to be Leung’s “substitute candidate”.

We will see as to whether this wave of legislative candidates being banned from running for office has a chilling effect on localist groups or the pan-Democratic camp in Hong Kong, leading to demoralizations. Yet it may be even that these arrests may have the opposite effect, which is to provoke a new wave of protests in Hong Kong because outrage over this visible sign of Beijing cracking down on political freedoms in Hong Kong. Authoritarian crackdowns do sometimes, after all, have precisely the opposite effect of not inspiring fear, but instead inciting protest.

We will going forward, then, as to the future of democracy in Hong Kong—and whether democracy, in fact, has any future in Hong Kong under Chinese rule.